I stopped in my tracks when I caught a glimpse of the boney white tines sticking up out of the honeysuckle.  After a quick check through my binoculars I knew I had seen that forked G2 before.  It was the buck I had nicknamed Split.  Now this is part in most articles where you would read about my stalk and how I waited for that perfect shot.  But since this was March of last year and the archery season here in Ohio had been closed for over 6 weeks, the stalk was very easy, and there was no waiting for the perfect shot.  I simply walked over there and picked up that wonderful shed antler.  This is the time of the year when the bucks is this part of the country start losing their head gear.  Although I rarely find as many as I’d like, hunting for shed antlers is one of my favorite late winter/early spring activities.  Here are the main reasons why.

Related Videos: In The Hunt – Everything’s Bigger In Texas

Reason number one is post season scouting.  Not only does finding a buck’s antlers indicate where he has been, but it also tells me that he has more than likely made it through the hunting season.  It is true that a small number of bucks that shed their antlers early are killed late season due to a case of mistaken identity.  Usually they are younger bucks that don’t quite have the larger male frame.  With a younger, smaller build once they drop their antlers, they can easily pass for a mature doe, but I have found this is usually a very small percentage.  According to the Ohio Department of Natural Resources, the total number of bucks that were harvested after shedding their antlers is as follows.  In the 2017-18 deer season there was a total of 186,247 deer tagged in Ohio.  74,786 of them were bucks, and 919 were shed bucks.  In the 2018-19 season there were a total of 172,040 deer tagged, 71,365 of them were bucks, with 735 of them having shed their antlers.  So if you do the math, or read on knowing I already did it for you.  That means each year shed bucks make up less than .5% of the total harvest and less than 1.25% of the total buck harvest, respectfully.  Keep in mind that here in Ohio we are fortunate enough to a very long archery season.  It ends on the first Sunday in February.  That is usually when the first few bucks start shedding their headgear. Chances are if you’re hunting in a state with a shorter season or one that ends earlier in the year then the numbers are going to be lower, simply because the bucks are still sporting their antlers when the season comes to a close.  Another shed hunting bonus is how easy it is to find regularly traveled trails.  Our weather this time of year in southern Ohio, is predictably inconsistent.  We get everything from snow, rain, freezing temps, and spring-time warmth all in a weekend.  This means the ground goes through the ringer of repeated freezing and thawing.  The good news for us is it really makes the regularly used deer trails stand out and very easy to find.  When I am out there looking for those dropped antlers and stumble upon these trails, I usually mark that spot in my memory banks, or in my phone, so I don’t forget to hunt there next season.  Naturally following these newly found trails can tell you a lot about where the deer are going or where they are coming from and give you some great intel concerning the selection of future ambush sights. 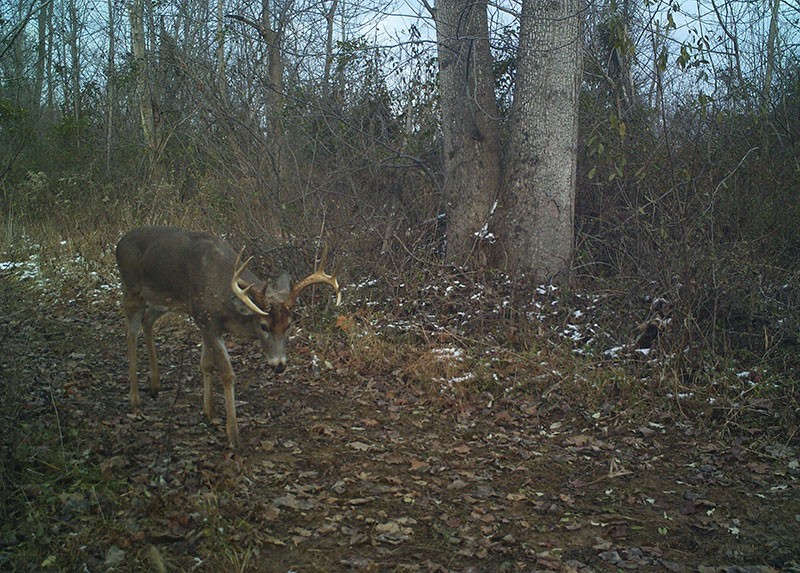 When I find a good antler, or on the rare occasion I pick up both sides, I like to go back and look at trail cam pictures and see if I can find the owner. Here is a shot of the buck in late November. This picture was taking about 200 yards from where I found his sheds. I’ll be looking for him this coming fall.

The second reason I like to go look for shed antlers is it’s a great excuse to get outside and get some exercise.  At this point in my life my chances to get out there seem to be more limited.  My real job, as I like to call it, is teaching human anatomy and physiology at the high school level.  I also am an assistant varsity football coach, and I sponsor our high school archery club.   By the time I fulfill all those responsibilities, there is not much time left to go hike through the woods.  Since my career commitments cut into my leisure time afield, I think it makes me appreciate it more when I do get a chance to spend time in the woods. A few weeks ago I spent the better part my Sunday crisscrossing our family property.  I did my best to find as many dropped antlers as I could.  After about 4 hours i had walked a total of just over 5 miles.  When I decided to call it a day, I left with the same number of sheds I had when I got there.   When talking about how I spent my day to a friend he commented how unfortunate it was to spend all that time and effort just to come up empty handed.  I explained that I didn’t really see it that way.  “Hey, I could’ve been at work, and I’ve never found any antlers there.”   I call it my decompression time.  No traffic, no arguing politicians, or competing with a teenager’s phone for their attention.  Just me and Mother Nature hanging out together.  If I happen to get lucky enough to find an antler or two, well that’s just a bonus. 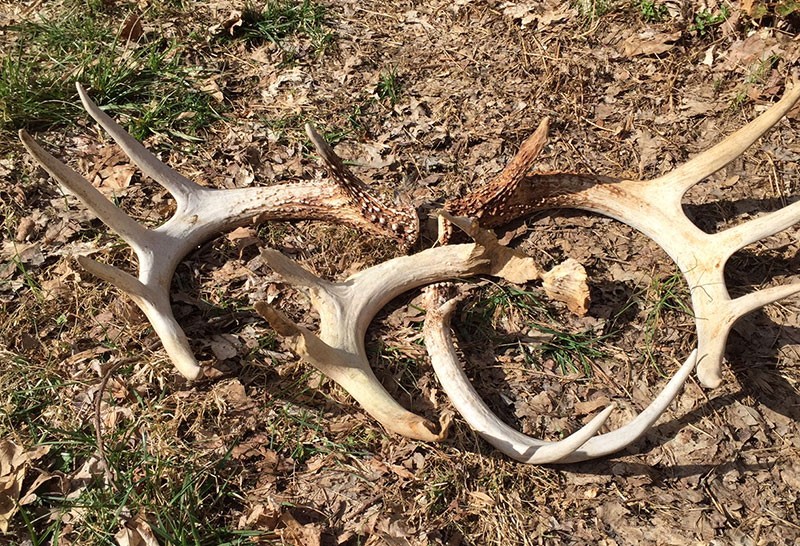 Here is the end result of a very good day. I logged about 9 miles and left a lot my DNA in the thorn bushes, but I feel it was worth it.

The third reason to hunt shed antlers is simple, the antlers.  Let’s face it, antlers are just cool.  Do a quick search on the web and you can find any number items fashioned from antlers.  Lamp posts, chandeliers, knife handles, so on, and so on.  I know my son’s little dog absolutely loves to chew on them.  Have you ever seen what sections of antlers go for at the pet store?  It almost makes me want to go into the dog chew toy business.  I even have a pen and pencil set someone made for me out of an antler.  The other obvious thing sheds can be used for is to make a set of rattling antlers.  I have a set that I use in the early season when I like to mimic light sparring.  If you do choose to rattle with a pair of sheds, I recommend cutting off the brow tines.  It will save you a lot of mashed thumbs.  My plan is to use all my sheds as the major theme in the decor of my basement, if I ever get it finished.

Related Videos: In The Hunt – You’ve Gotta Be Patient 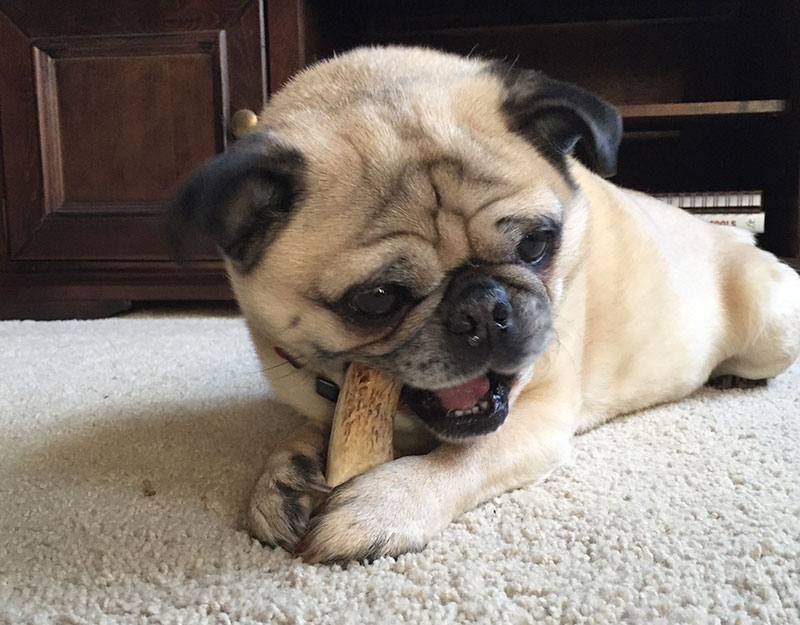 As far as shed hunting goes I don’t consider myself to be an expert.  I walk a lot of miles with many times nothing to show for it.  So I really don’t have any foolproof shed finding tips, but here are some tactics that have worked for me.  I usually start by checking the field edges.  I’ll walk or drive in my UTV about 10 or 15 yards off the field edge.  A lot of times I can find shed antlers laying there in the field.  As I cruise the perimeter I will stop periodically as I come across trails either heading into or coming out of bedding areas.  I’ll usually follow those trials in the woods 100 yards or so and then take a connecter trail back out into the field.  Another thing I look for is a spot where deer have to jump a fence.  My theory is that when a buck lands after clearing the fence, it may jar him enough to cause an antler to break free.  I just found two last week in just such a spot.  I also will check late season food sources, such as cut corn fields or honey suckle thickets.  So basically I pretty much walk everywhere.  I know a few guys who just seeming are antler magnets.  One friend of mine has hundreds of sheds he has found over the years.  Every spring he would always ask me if I’ve found any.  “Yeah I had a good year this year, I found 8.”  I would tell him.  “How about you?”  He would always grin and humbly reply with something like, “Well, I have 24 so far.”   Clearly he has many more bucks around him then I do or he knows something I don’t.  What I do know is you can’t find those antlers from the recliner or your desk at work, so get out there, and enjoy your walk.  You never know, you might even find the antlers of that big boy you’ve hunting.  Good luck and I’ll see you in the deer woods.

Shed hunting is something I love to do in the winter and spring. There are a lot of mistakes people make when shed hunting and, in this video, I’m covering some no-no’s. The first is to not walk too fast when shed hunting. The quicker you walk, the tougher it is to spot antlers. Second,...

Something that is often overlooked, especially by beginner shed hunters, is to train your eyes to spot sheds. The first thing I mean is that you need to understand how sheds lay on the ground. It’s not just tines up out in the open. Many times, sheds will hardly be noticeable and if you can...

Watch Alex Comstock explain some of his basic shed hunting tips that have helped him find most of his sheds. First, and most importantly is to locate the local food source. Deer need food in the winter more than any time of year, and if you can find the food, you’ll find deer. Next, try...

There are two primary conditions you’ll be shed hunting in. And that’s either with snow or no snow. There are some pretty stark differences between the two. When shed hunting in the snow, you can easily identify the deer trails, bedding and where they’re feeding. You can stick to the trails quite easy. When there’s...