1. Start with the Right Breed 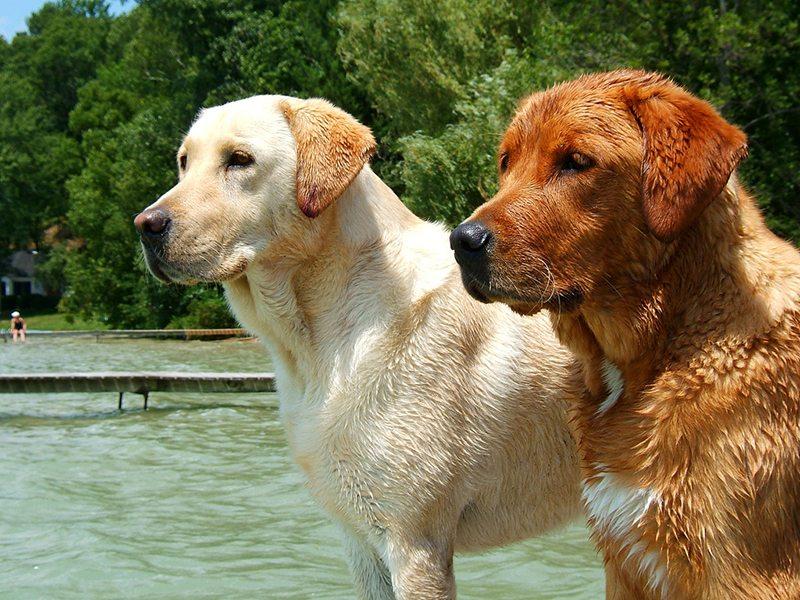 (image source; Spirit Animals)
As much as you might love and cherish the bull dog you grew up with, if you’re in the market for a well-rounded and dependable hunting dog you need to go with a solid working breed. To this end, Retrievers in general (Golden, Chesapeake Bay, Yellow or Black) are some of the best breeds capable of navigating any terrain. These dogs are made to please and some of the most excellent swimmers of any breed. There are plenty of other breeds that also perform admirably such as English or Irish Setters and German Shorthaired Pointers, but we’ve always been partial to Retrievers. 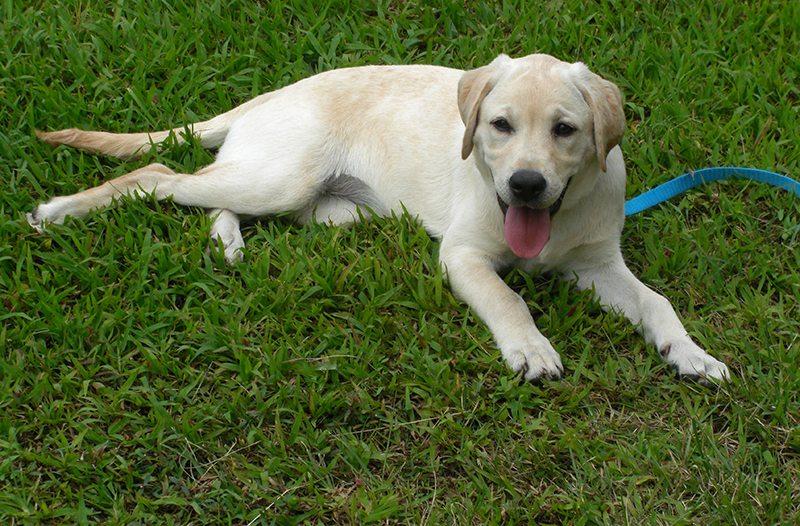 (image source; balanced obedience)
There’s a big trend among dog training these days that places an emphasis on learning various skills and abilities first rather than basic obedience. For example, it’s easy to take a Retriever pup and have them retrieve small toys and objects to not only play with them but to keep them active and ready to work at a moment’s notice. However, once you’ve been working with your dog for months on end and they’ve retrieved everything that’s ever been thrown or fallen from the sky, well, it makes teaching them to “Stay” that much harder. Instead, try making the “Stay” command one of the first things you work into your dog. It’ll make working with them much easier when around other dogs.

3. Properly Introduce Them to Guns 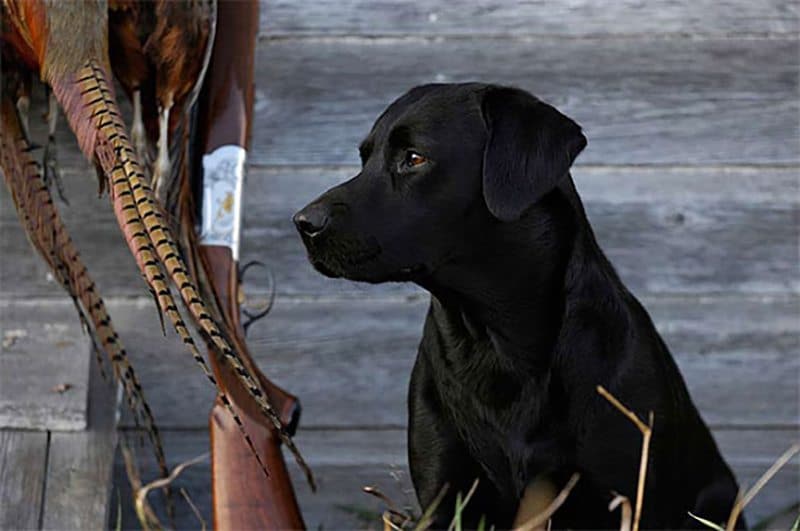 (image source; UK Labs)
We all know dogs have incredible hearing compared to our own, so the noise of a shotgun going off can be terrifying if they’ve never heard one before. If a dog is improperly introduced to gun fire they run the risk of becoming gun shy and harder to work with. One method many hunters use is bringing their dog along to the trap and skeet or outdoor rifle range. Stay around the car for a while with the dog so it can begin familiarizing with the sound of distant reports. Slowly move closer and closer as more shots go off. Eventually, you can have your pup close to the stalls and firearms themselves. Since they’ve been slowly introduced, they have a much greater chance of not being frightened by the loud and sudden report of gun fire.

4. Make the “Come” Command a Priority 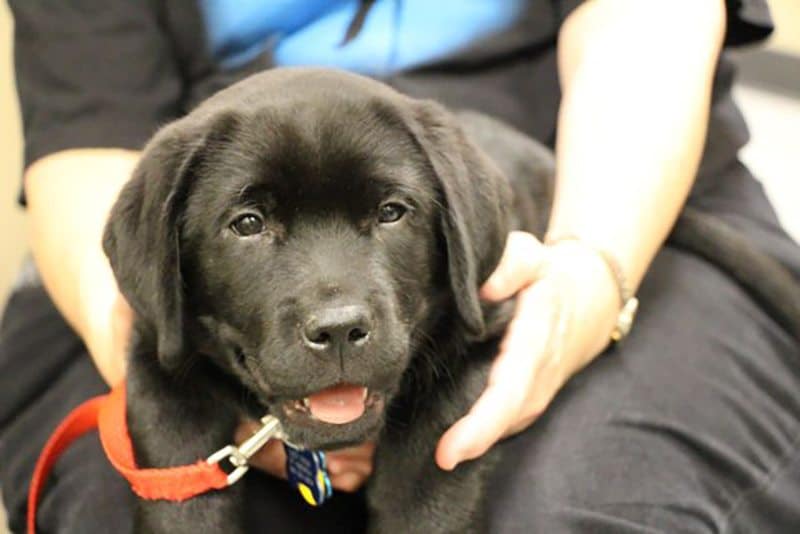 (image source; Puppy in Training),
There’s a certain trick to utilizing an effective “Come” command with any dog you raise. It not only serves to call them when needed, but it can be so ingrained in their minds that it can also function as a way of breaking a bad or dangerous act before it happens. One way I’ve personally had success was to take a long lead (about 30 feet) and tie it to the 4-month-old pup while they’re lounging in the house. Wait for the dog to eventually forget it’s on the lead. Whether the dog is out of sight or in the same room, simply call its name and then associate that with a specific “Come” command. You want to pick something not commonly said so the dog will always associate that word with that command. We used the phrase “To Me” as it was quick and concise and easy for the dog to hear. Once you say their name and your “Come” phrase, start slowly reeling the dog in with the lead until either you pull it to you or eventually walks over. After a few months of doing this several times a day the dog will automatically associate going to you whenever it hears its name and that particular command. Being able to effectively call your dog to you is easily one of the most important obedience marks any dog and owner should attain. 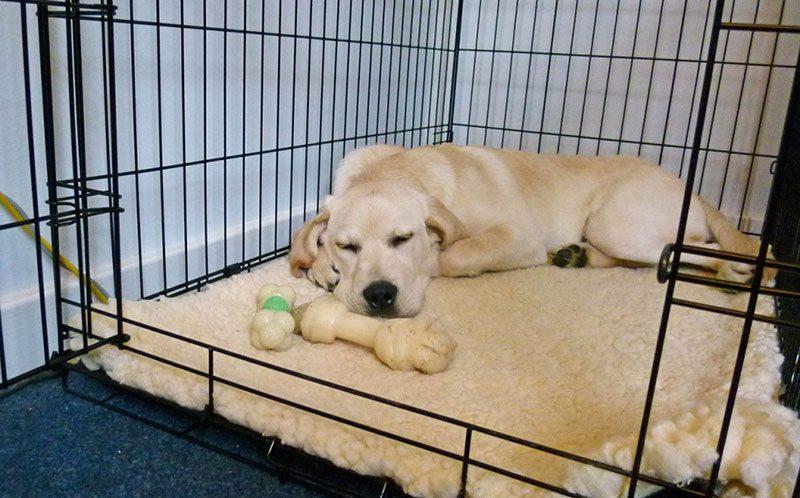 (image source; www.8pawsup.com)
We all know people who never began training their dog with a crate and the dog’s attitude now more than speaks for itself. Crating might seem cruel and it’ll certainly make you wince a bit those first few weeks when they’re crying for attention. However, sticking with it pays off in the end! Make sure you crate your pup for the first several months when you’re asleep or not home. Leave some objects like a chew toy and especially their own blanket. After a few weeks of hating the crate, the dog will learn to love it. It becomes the dog’s own room of sorts. It’ll run to the crate at night because that’s the safest place it feels like sleeping. It also helps imprint more and more importance on you when you let them out in the morning or when you come home as you get to be the hero that awards the dog with attention and play time. Eventually, you can phase the crate out after 6-7 months.

Did you know antlers are the fastest growing mammal bone? Antlers are a fascinating part of nature. They’ve been used by people to make tools, weapons, toys, and ornaments throughout history. Antlers are grown annually by male deer in the cervidae family (moose, elk, reindeer, and more). Antler has been used for thousands of years...

Like any sporting professionals, archers have their own quirks and superstitions which they’ll tell you make all the difference between a bullseye and a balk. While not all techniques will work for everyone, most archery aficionados agree that there are a handful of blunders most amateur archers make which keep them off their target. We gathered...

A wildlife park or sanctuary gives animals the opportunity to roam and flourish, whereas, a zoo has cages and less space. Visitors to wildlife parks are able to view wildlife that is natural to that land. Watching wildlife in its natural habit is extraordinary. There are many parks people can visit across North America where...

Hunting is a sport, it’s a great way to get outdoors, it can be a bonding experience for a parent and child, but it’s also a way to put meat on the table. This historically has arguably been the most important result from the hunt. It provided humans the very sustenance and the nutrition they...