8 Great Hunting ARs For The Field 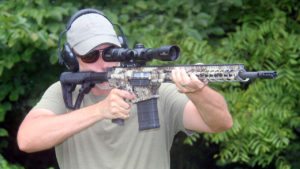 There’s little doubt that there are far more AR rifles in the field today than there were just a few years ago, and with good reason. Hunting ARs offer plenty of capacity, excellent accuracy and dependability, and fast follow-up shots—features that make this family of guns ideal for a variety of hunting applications.

Over the past five years I’ve used ARs to hunt hogs, predators, and deer, and there’s no question that there are plenty of great options for hunting all kinds of game. In fact, choosing eight of the best AR rifles for the field has become a bit of a challenge since there are so many fantastic options in a wide variety of calibers.

Which one is right for you? That depends on your budget and the game you plan to pursue. Here’s a look at eight great hunting ARs for the field. You can find all these Hunting ARs on GunBroker.com. 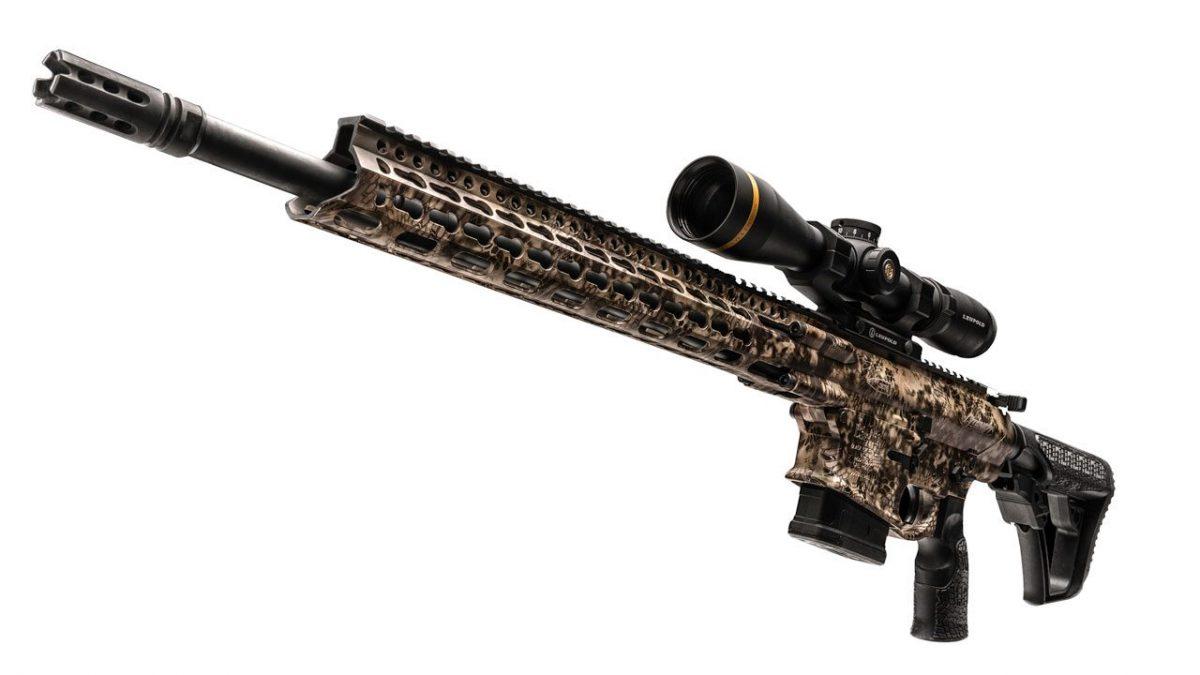 The DD Ambush is a purpose-built hunting rifle that has a host of features that make it one of the best big game ARs on the market. The free-floating 18-inch barrel connects to the upper receiver via DD’s 4-Bolt Connection System with barrel extension, which results in improved stability and accuracy with reduced weight.

A two-stage Giessele Super Semiautomatic allows for precise shot placement, and the bolt carrier group has new geometry and a low-frictioncoating for maximum durability even in dusty conditions—an important consideration in the field. The controls are ambidextrous, and the user-configurable charging handle extension allows you to set the rifle up for use with a large optic.

It’s extremely accurate, very reliable, and comes with a Kryptek Highlander camo pattern is added using a process known as hydro-graphics that means it won’t fade or chip. $3,096. Danieldefense.com. Buy the Ambush on GunBroker.com. 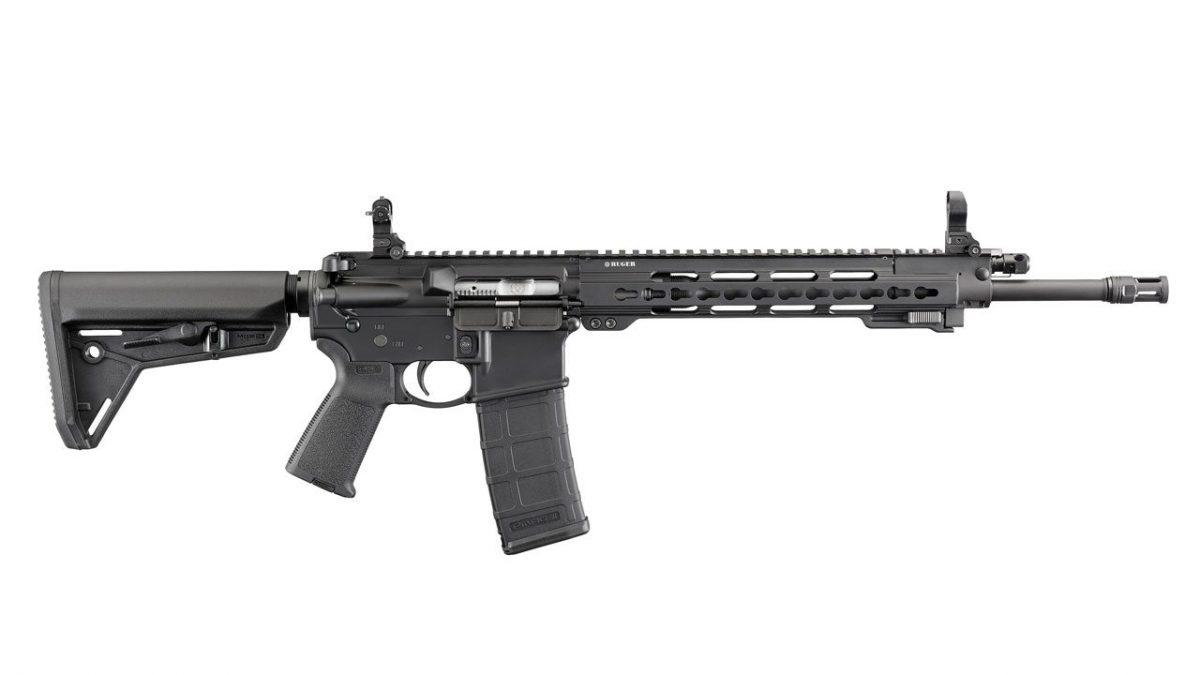 If you’re serious about hunting the hinterlands with an AR rifle then this is the gun you need. The barrel, upper and lower can be disassembled quickly and easily in the field, and the Ruger carrying case makes it easy to tote your rifle and gear into really remote areas where few other hunters venture.

The chrome-lined, two-stage piston has a multi-stage regulator for easy adjustments and a long life, and there’s an optional .300 Blackout upper available, too. Other features include a two-stage, 4.5-pound trigger, flip-up sights, a KeyMod handguard and three 30-round magazines. $2,199. Ruger.com. Find the 556 Takedown on GunBroker.com. 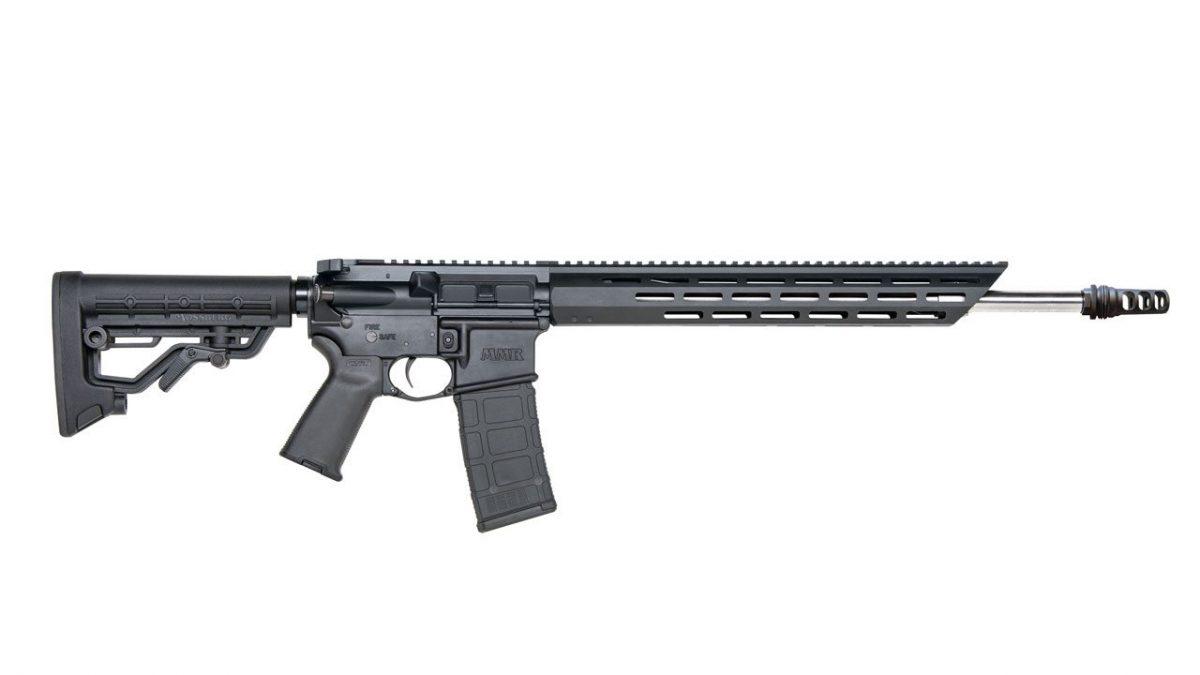 Mossberg’s brand-new MMR pro was designed with 3-gun shooters in mind, but it makes a fantastic varmint and predator rifle. The 18-inch AISI 416 stainless barrel is long enough to gain extra velocity from your hunting loads, and the barrel is threaded and comes topped with a SilencerCo 3-Port muzzle brake.

The 15-inch KeyMod handguard is perfect for adding all your predator hunting accessories and the long top rail allow you to mount a high-magnification scope. Perhaps the best feature on this rifle is the new JM Pro drop-in match trigger, which was designed in conjunction with Jerry Miculek. 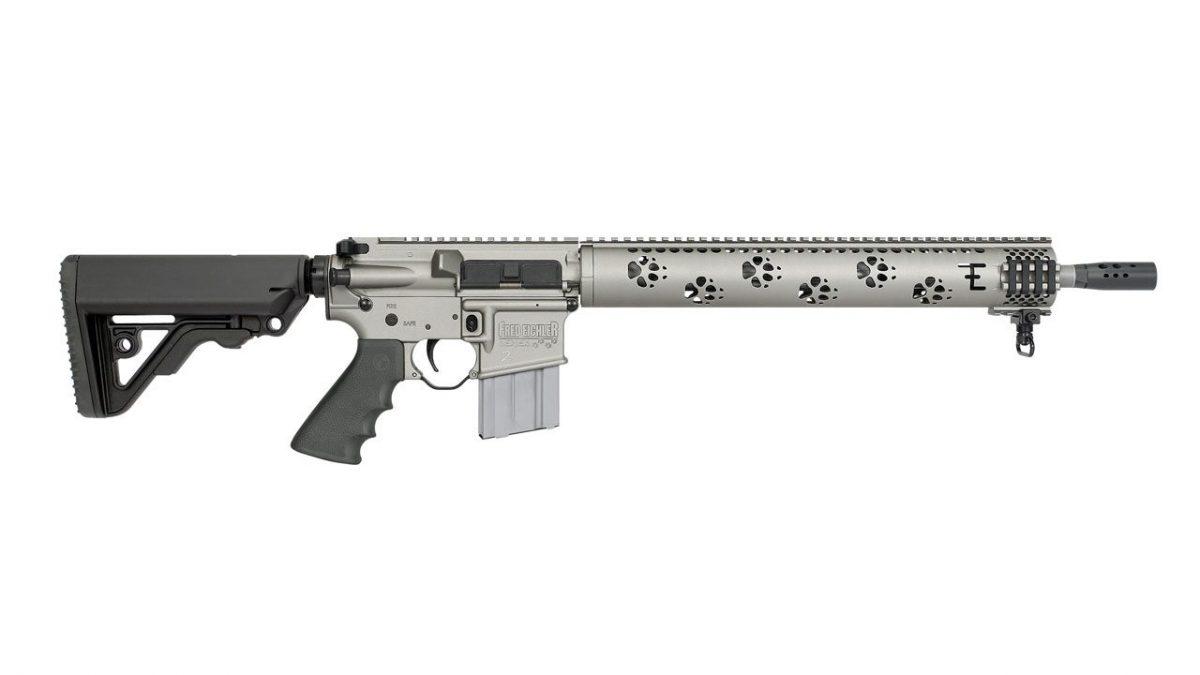 Fred Eichler is one of the deans of predator hunting, so it’s a safe bet that the rifle he carries afield will have a long list of hunter-friendly features. The LAR-15 FES Predator 2 comes with a .223 Wylde chamber for 5.56 and .223 loads, a two-stage RRA trigger with Winter Trigger Guard (for gloved hands), a 16-inch fluted bead blasted free-floated stainless steel barrel with a RRA Fred Eichler Series muzzle brake, and a BCMGUNFIGHTER charging handle.

The mid-length gas system has a low-profile gas block and there’s plenty of room up top for mountain accessories. The cool coyote-track handguard is an exclusive feature on this rifle, and the receiver and handguard are available with an eye-catching gunmetal gray or tan finish.

RRA says that accuracy potential is ¾ of an inch—exactly the kind of precision you need for long shots on wary ‘yotes. $1,735-$1,760. Rockriverarms.com. Find the Fred Eicher Series Predator 2 on GunBroker.com. 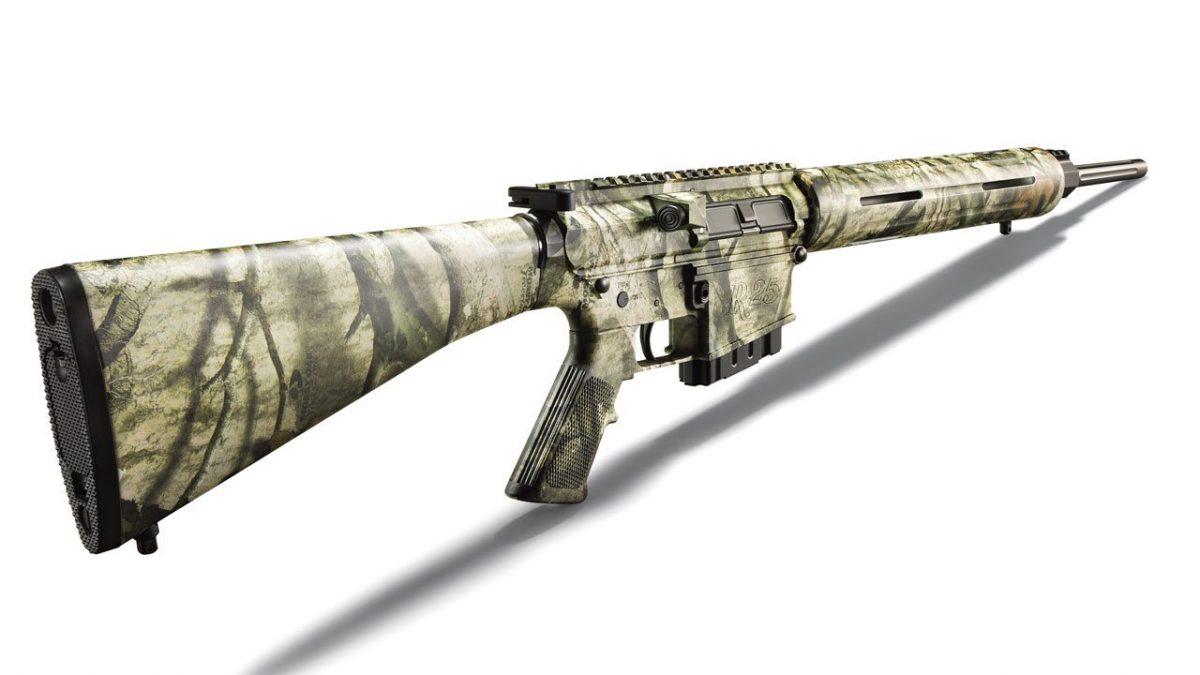 Remington’s R-25 was one of the earliest hunter-specific ARs from a major manufacturer, and it remains one of the best. The original R-25 is still a great rifle, and I’ve used it on deer and hogs in Texas, but the newest model has some serious upgrades. The anodized upper and lower receivers are made from Teflon-coated 7075 aluminum, so they are light and durable.

The bolt group is now lighter, and there are dual ejectors for positive cycling shot-after-shot. The skeletonized stock has a SuperCell recoil pad, so it’s a comfortable rifle to shoot, and the free-float tube and Hogue pistol grip allow you to hold the rifle comfortably. 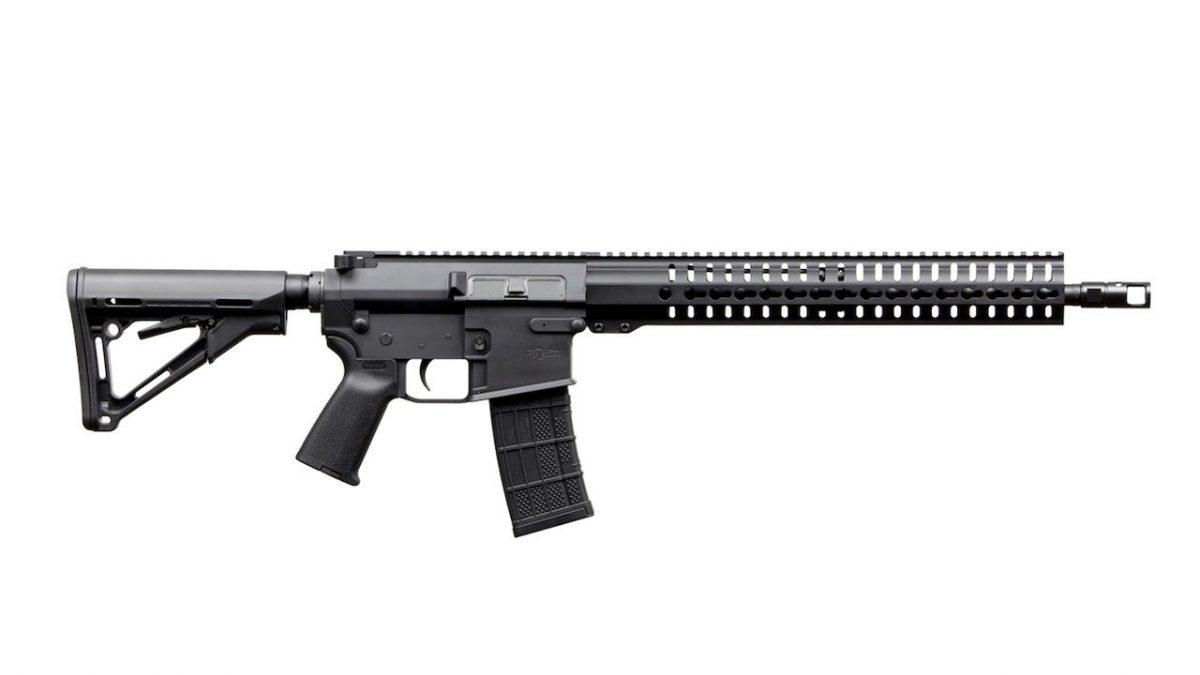 CMMG has been rethinking the standard AR platforms, and the first “hybrid” rifle they launched was the 7.62×39 Mutant. Now, they’re adding the Anvil rifle in .458 SOCOM, a powerful round that’s perfect for medium-sized game and the new favorite of many hog hunters because it delivers prodigious stopping power and works with AR-15 magazines.

The secret here is the new POWERBOLT. Unlike many .458s, which use a thinned-down 5.56 bolt, the ANVIL has a purpose-built bolt group that was designed to be more robust yet doesn’t add a lot of weight. What you get is a rifle that’s stouter than most AR-15 converts, yet lighter than AR-10 rifles.

The receiver is made from 7075 billet aluminum, and the handguard has KeyMod attachment points. There are three models with 16.1-inch barrels, all of which weigh around 7 ½ pounds. Prices start at $1,849.95. cmmginc.com. Find the Anvil on GunBroker.com. 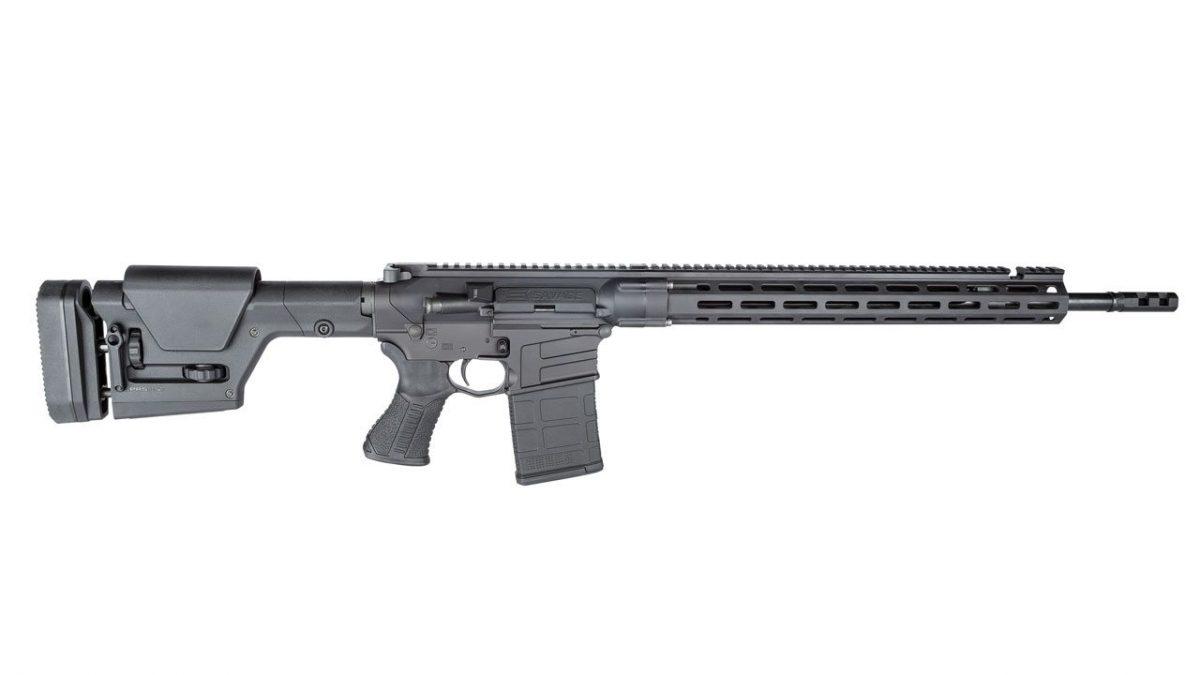 Savage is new to the AR game, but—no shock—the company’s first foray into the world of MSRs has produced some great offerings. Of particular interest to big game hunters is the MSR-10 Long Range, a purpose-built big game black gun with a host of useful features like a fluted heavy barrel with Melonite QPQ finish, a Magpul PRS Gen 3 adjustable buttstock, and a BLACKHAWK! AR Blaze two-stage trigger.

The rifle is chambered in either .308 or the hot new 6.5 Creedmoor, and barrel lengths are 20 and 22 inches (respectively). At between 9 ½ and 10 pounds it isn’t a light AR, but if you need a rifle that shoots accurately and reduces recoil to near nothing then this is your gun. $2,284. Savagearms.com. Buy the MSR-10 on GunBroker.com. 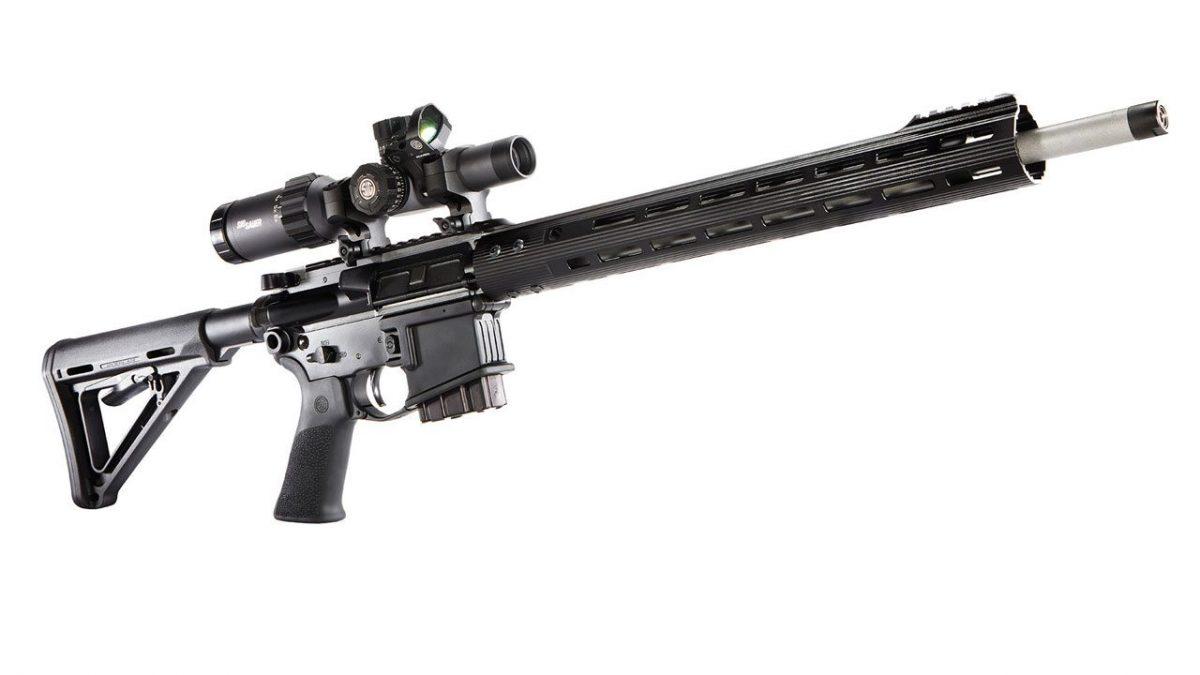 The M400 Predator is SIG’s take on the ultimate hunting AR, and it’s fantastic. At the heart of this rifle is SIG’s time-tested DI gas system, and the hard coat anodized upper and lower receivers stand up to the elements. The two-stage trigger is light and crisp (4.5-pounds) for precision shooting on prairie dogs and other small targets, and there’s a .300 Blackout version available, so you can take on just about any game in North America with this platform.

The six-position stock allows you to adjust the fit of the rifle when wearing heavy winter clothing, and there is plenty of space on the handguard and the top rail for mounting any accessory you need. At 7 pounds it’s also light enough for all-day carry.

Prices start at $1,446, making this rifle a relative bargain, and the five-round magazine is legal for hunting in most areas. There’s also a California-compliant version as well. Sigsauer.com. Find the M400 Predator on GunBroker.com.

The P-10 C is an increasingly popular firearm from CZ USA but after 5 years on the market, does it still hit the mark?