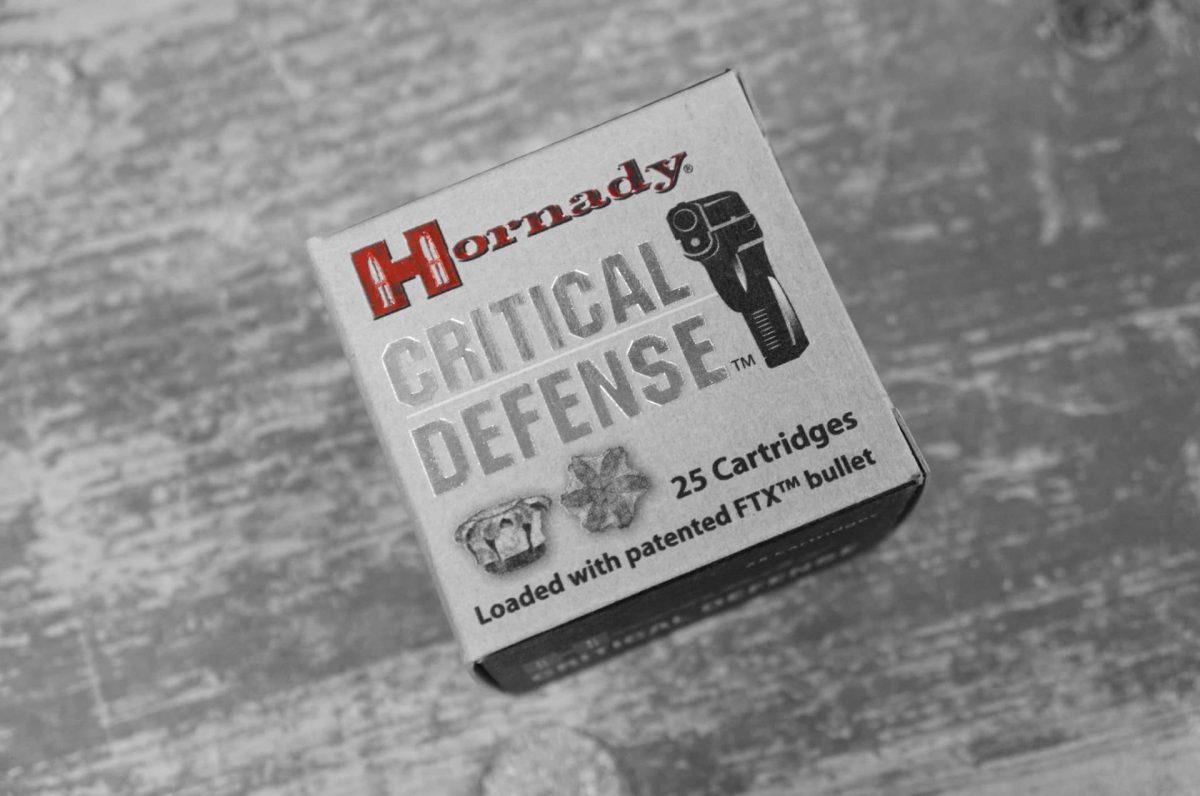 Revolvers will always be with us. Regardless of how popular small, semi-automatic pistols may get, there will always be shooters that prefer a snub nosed wheelgun. But with that comes the question of what type of ammo to use? We’ve done a considerable amount of shooting with the excellent Hornady Critical Defense .38 Special +P, which uses Hornady’s FTX bullet. The Critical Defense line of rounds is designed to always expand regardless of whatever clothing it must first penetrate. Here’s Hornady’s boilerplate:

Reviewing ammo is tricky, because there are a lot of qualities that are subjective interpretations on the part of the shooter. To hopefully avoid as much subjective information as possible, let’s look first at the objective qualities of the Hornady Critical Defense .38 Special: Accuracy, reliability, consistency, and penetration.

Accuracy
The Hornady FTX bullet is based on the XTP bullet, which in addition to being a top-notch self-defense round is also legendary for its accuracy. XTPs are popular with competition shooters looking for maximum accuracy. It’s no surprise then that the FTX bullet used in the Critical Defense ammo would also provide excellent accuracy. For accuracy testing, two test platforms were used: a Ruger GP100 with a four-inch barrel and a Smith & Wesson 640 Pro Series. The guns were shot for groups off a rest at 25 yards for maximum accuracy, and freestyle at 15 yards as well. An interesting side note – it’s been noted that freestyle slowfire groups at 15 yards produce mathematically similar results to sandbagged groups at 25 yards. This is obviously not the case for all shooters, and has much more to do with the individual marksman than the gun itself.

Out of the GP100, the average group at 25 yards was 2.15 inches. Owing to its shorter sight radius, the average group from the 640 opened up considerably to 3.44 inches at 25 yards. Five 5-shot groups were fired from each gun at each distance (15 and 25 yards), with the exception that the last group from the 640 was four shots because I was out of ammo. Best group of the day was a 1.22-inch group from the GP100 at 15 yards freestyle. Out of either gun, the accuracy from the Hornady Critical Defense rounds was excellent. 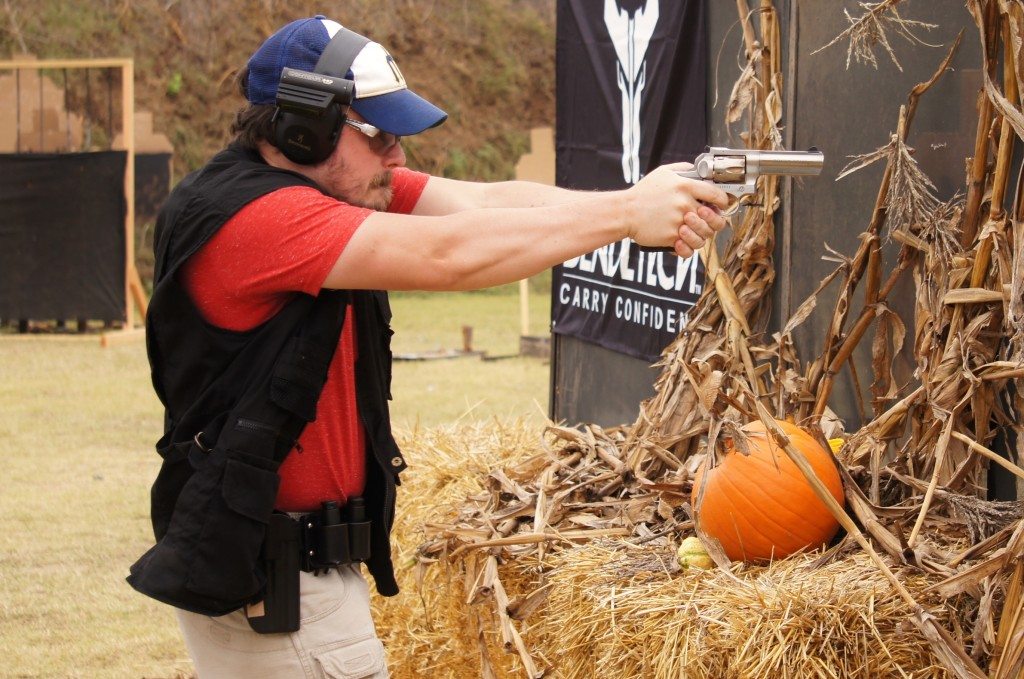 Reliability
Revolver ammo is subject to reliability issues just like semi-auto ammo. A “feed” issue with a revolver occurs when a cartridge doesn’t fully seat in the cylinder during a speed reload, or if it sticks and doesn’t eject. Dirty cylinders can exacerbate this problem as well, as can rough or dirty cases. The nickel-plated cases of the Hornady Critical Defense fed without issue in the test platform GP100 during the recent IDPA Nationals. Fired cases extracted easily with a positive strike on the ejector rod, and new rounds were quick and easy to reload using the Comp-III speedloaders. In fact, the pointed shape of the FTX bullet makes the Critical Defense easier to reload in a hurry than other defensive pistol rounds. The large, flat give on other JHP bullets can make aligning the rounds with the charge holes difficult; Critical Defense doesn’t have this issue.

Consistency
As mentioned, the Hornady Critical Defense was very reliable and very accurate. It was also very consistent, meaning that shot to shot there were no obvious variations in powder charge. Hornady states a muzzle velocity from a test gun of 1090 FPS with a four-inch barrel, the rounds were able to provide at least 954 fps in all tests, and were sufficient to meet the IDPA power floor of 105 for Stock Service Revolver. Performance on steel was excellent; all the steel targets that needed to be engaged at IDPA Nationals went down with single hits from the Critical Defense. 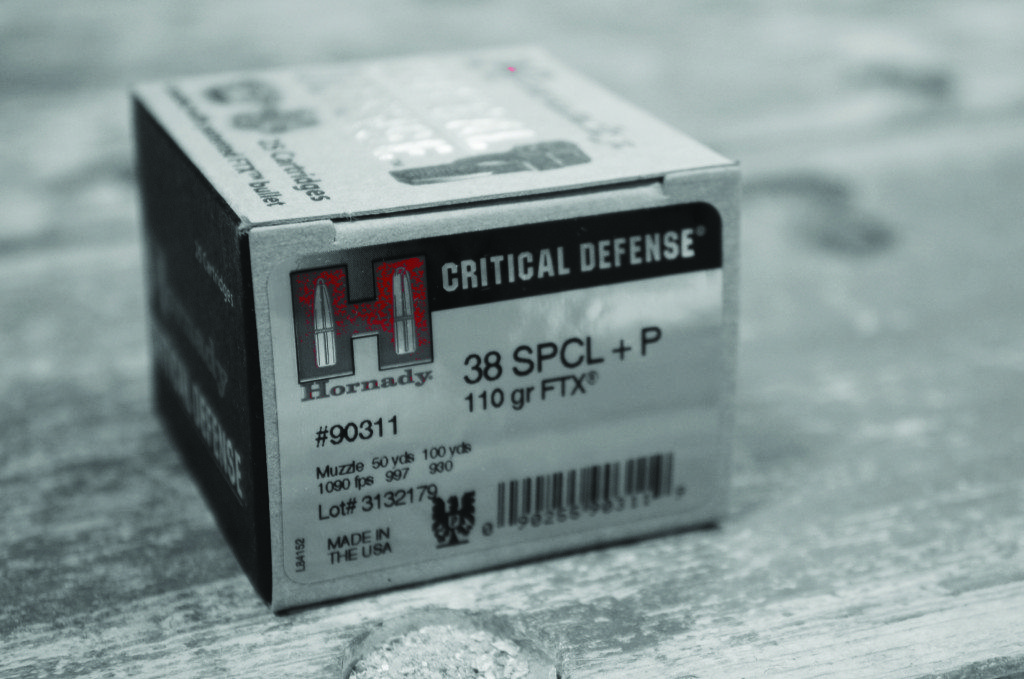 Penetration
Richard Mann did extensive penetration testing with the Critical Defense for Shooting Illustrated, which you can read online. Richard tested the Critical Defense using a two-inch barreled revolver in 10% ordnance gel, where it achieved 10 inches of penetration at a fairly low muzzle velocity of 955 FPS. Other tests have shown similar penetration, ranging between 10 and 14 inches depending on the gun and consistency of ballistic medium.

The FBI standard for penetration is 12 inches after defeating four layers of denim, in many tests the Critical Defense .38 Special round failed that test, and in other tests it passed. This illustrates the problem with internet ballistics tests, namely that it’s impossible to know if proper testing methods were used, if the gel is calibrated correctly, etc. Richard’s test for Shooting Illustrated is the best of the lot, since Richard is a known entity and a professional.

Another note on the Critical Defense round: it is not a bonded round like Winchester Ranger or Federal HST. If you’re looking for a bonded round using similar technology, check out Hornady’s Critical Duty line of ammo.

The Verdict
Hornady’s Critical Defense .38 Special +P load is a solid choice for your carry guns. While it doesn’t consistently reach 12 inches of penetration in testing, it will provide reliable expansion after defeating most common types of clothing. It’s well made, fast to reload, and has Hornady’s excellent levels of quality control. This is a summertime carry load for a j-frame, and would make a good match load for IDPA competition.

What is power factor?

If you hang around competition shooters, sooner or later you’ll hear one of them mention “power factor.” To gamers, it’s an important number, because it can affect your scoring, or even get you disqualified from a match. But to most shooters, they have no idea what it is.

Power factor is a simple way of classifying different cartridges based on their energy. To calculate power factor, take the bullet’s weight in grains and multiply it by the muzzle velocity as recorded by the chronograph; then divide that final number by 1,000 to produce a three digit number For example, a .45 ACP firing a 230 grain bullet at 850 FPS would have a power factor of 195.50.

Why is this important? In USPSA, your round’s power factor is what makes the difference between Major and Minor scoring in Limited, Open, Single Stack, and Revolver divisions. Rounds that have a power factor of 165 or better score “Major”, meaning they get 4 points for a C hit, where rounds scoring Minor (164 to 125 PF) score 3 points for a C-hit.

In IDPA, each division has a Power Factor (PF) that must be reached in order for the gun to compete. For SSP and ESP, that PF is 125. In CDP and ESR, it’s 165; and SSR comes in with the lowest at 105. Fail to reach those numbers and you’re disqualified. USPSA has a similar rule, where all guns must meet at least a power factor of 125. If you fall below, you’ve failed chrono and will be disqualified.

So in a nutshell, Power Factor is a made up calculation of a given bullet’s energy that is only relevant to competition shooters and completely meaningless to anyone else.

You can buy Hornady Critical Defense on GunBroker.com.