The big news from Federal Premium this year might have been the release of the red-hot 224 Valkyrie, but the brand’s three new turkey loads might be equally if not more game changing. For years, almost all turkey ammo pretty much followed a standard recipe to bring birds down — hunters relied on a magnum dose of lead or plated shot in the #4, #5, or #6 neighborhood. And while that recipe still works, Federal has spent some time experimenting with ways to improve the standard turkey load, using a new high-tech wad and cutting-edge shot material to provide hunters with harder-hitting turkey ammo that anchors gobblers efficiently at surprising distances.

Here’s the lowdown on each of those three new loads. Which one is right for you? That depends, but there isn’t a bad option in the bunch. As an added bonus, a portion of the proceeds from the purchase of these shells goes to the National Wild Turkey Federation to help preserve the birds for future generations of hunters. 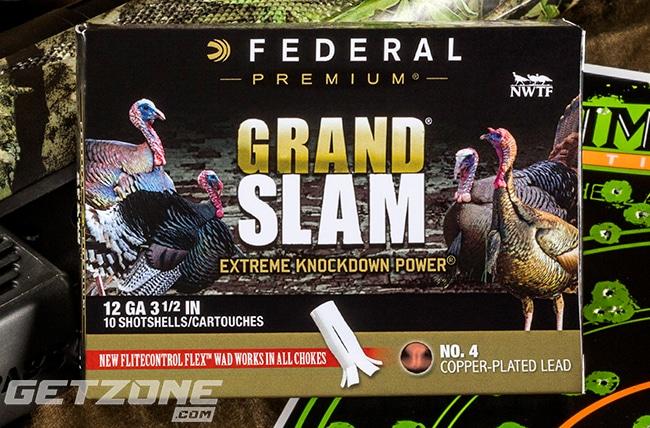 At first glance, Grand Slam looks very much like the standard turkey loads Federal has been offering for years, but when you examine the interior construction of these shells you’ll realize what sets these apart from other gobbler ammo. For starters, Federal uses a buffer that prevents pellet deformation  — one of the leading causes of sub-par patterns. As shot exits the barrel it moves, and that movement can cause pellets to bounce off each other resulting in oddly shaped pellets. You don’t have to be a physics expert to understand that dented and oblong pellets aren’t going to fly true, and when that deformation occurs you’re losing a percentage of your pellets that stray from the pattern because they’ve been damaged. In essence, you’re hoping that there are enough round pellets to create a lethal pattern at whatever distance you take your shot. Federal has helped remedy the issue of shot deformation by adding a special buffering that prevents the copper-plated pellets in their Grand Slam loads from bashing into one another, and that results in more uniform pellet shape — and more uniform patterns. Roll crimping and a clear card wad help to keep the buffering in place.

The other critical component in the new Grand Slam loads that makes them so lethal at long ranges is the addition of Federal’s FLITECONTROL FLEX wad, which debuted, in Federal’s redesigned Black Cloud waterfowl loads. This wad opens from the rear, which, unlike traditional wads that have petals that open in the front, keeps the shot string more uniform, and ensures more pellets land on-target. The combination of buffered copper-plated shot and the rear-opening FLITECONTROL FLEX wad results in improved patterns out to extended ranges.

Serious turkey hunters have known for some time that shotshells perform differently in ported and non-ported chokes, so the team at Federal Premium looked at methods to improve pattern consistency regardless of choke design.

“We rely on gas pressure from inside the barrel to flex the fins and open them, which triggers the shot to separate from the wad,” Compton says. “If there’s not enough pressure, the wad doesn’t slow down enough for optimum separation.”

Pressure is lost when gas from the barrel escapes through vents in ported choke tubes, but Federal’s FLITECONTROL WAD helps remedy that problem.

“The brake fins open, so payloads separate exactly when they’re supposed to, regardless of the gas pressure behind them,” Compton said. The result? Consistent patterns regardless of pressure levels so hunters can benefit from reduced pressure (and recoil) while still maintaining a consistent, lethal pattern even at extended ranges. 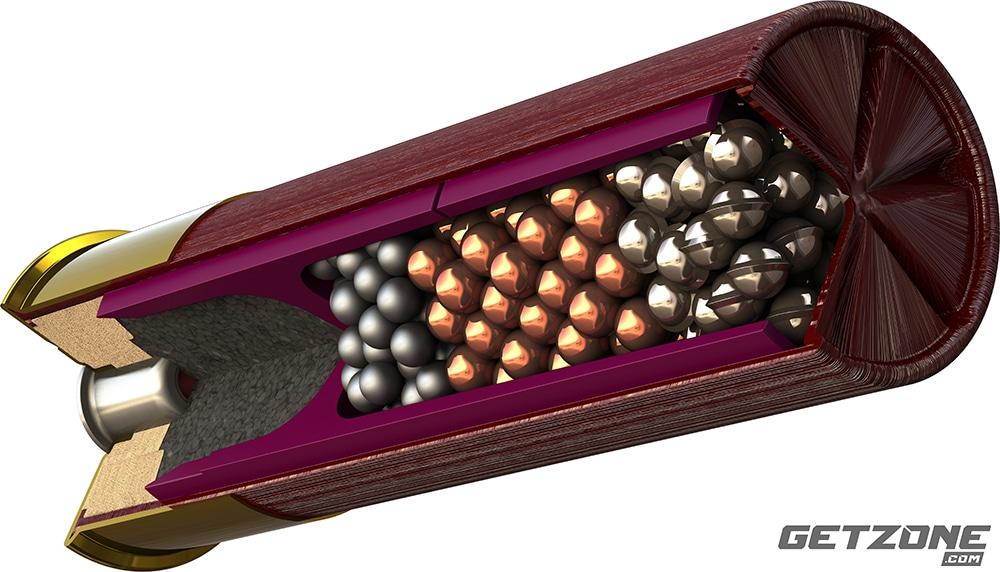 A few years ago, Federal launched their 3rd Degree turkey load, a unique design that combined three different pellets for maximum effectiveness at all ranges. 20 percent of the pellets in each shell are comprised of #6 FLITESTOPPER lead, which has a unique belted design that is extremely lethal at close ranges. 40 percent of the load is comprised of traditional #5 copper-plated steel shot which is highly effective at moderate ranges. The remaining 40 percent of the shot in these loads, however, is Federal Premium’s brand-new TSS (Tungsten Super Shot) #7, which is a tungsten alloy that is 20 percent denser than Federal’s HEAVYWEIGHT shot and an astounding 56 percent denser than lead. That type of density means that you can glean more energy from smaller shot.

“An object with higher density will maintain its energy longer in flight than a less-dense object,” says Dan Compton. “In pellets, the increased density will extend the lethal range of the payload. Denser pellets fly farther and penetrate deeper. A #9 HEAVYWEIGHT TSS pellet carries at least as much penetration energy as a #5 lead pellet at all ranges. This means you can greatly increase the pellet count of a payload by using a smaller shot size, but penetrate as much or more because of the increased density. Overall patterns densities are increased, so there are more hits on the target.” Additionally, TSS is extremely hard so deformation is not an issue like it is with other pellets. 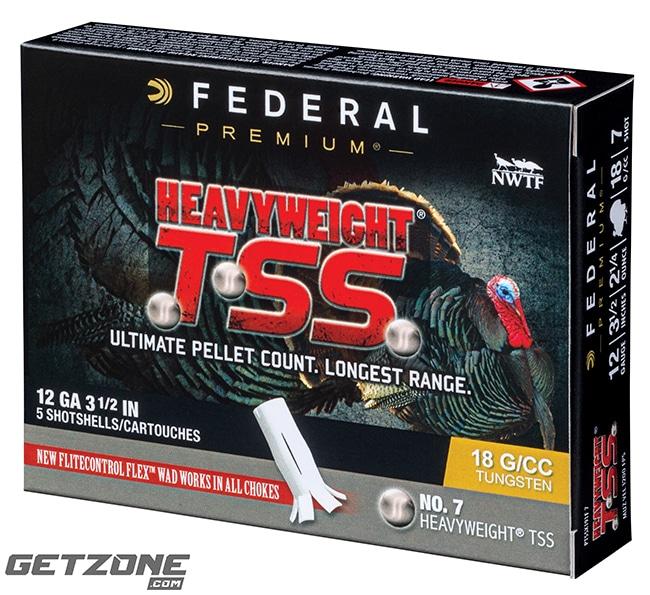 As previously mentioned, HEAVYWEIGHT TSS defies conventional wisdom regarding load selection for turkey hunting. Because lead and copper-plated lead shot is less dense than the tungsten alloy in TSS hunters have traditionally relied on larger shot to carry enough energy to kill turkeys at longer ranges. But the incredible density of TSS shot means that no longer are really large pellets required to produce the type of energy levels to quickly and humanely drop birds. Instead, HEAVYWEIGHT TSS is available with either #7 or #9 shot. Using smaller shot also offers another major advantage — increased pellet counts. A 1 1/8-ounce load of HEAVYWEIGHT TSS #9 pellets contains 408 pellets whereas a 2-ounce load of lead #4 shot only contains 270 pellets. At 40 yards a 3″ 12-gauge 1 ¾-ounce load of #5 lead shot will place between 100 and 130 pellets in a 10″ circle, but with a 3-inch 12 gauge with 1 ¾-ounces of HEAVYWEIGHT TSS #7 will put about 200 pellets in the same circle at the same distance. That same 12 gauge load with#9 HEAVYWEIGHT TSS pellets will put roughly 350 pellets in the circle at 40 paces, and since TSS pellets are so much denser than lead they are carrying roughly the same level of energy. The result? Quicker, clean kills even at extended ranges. 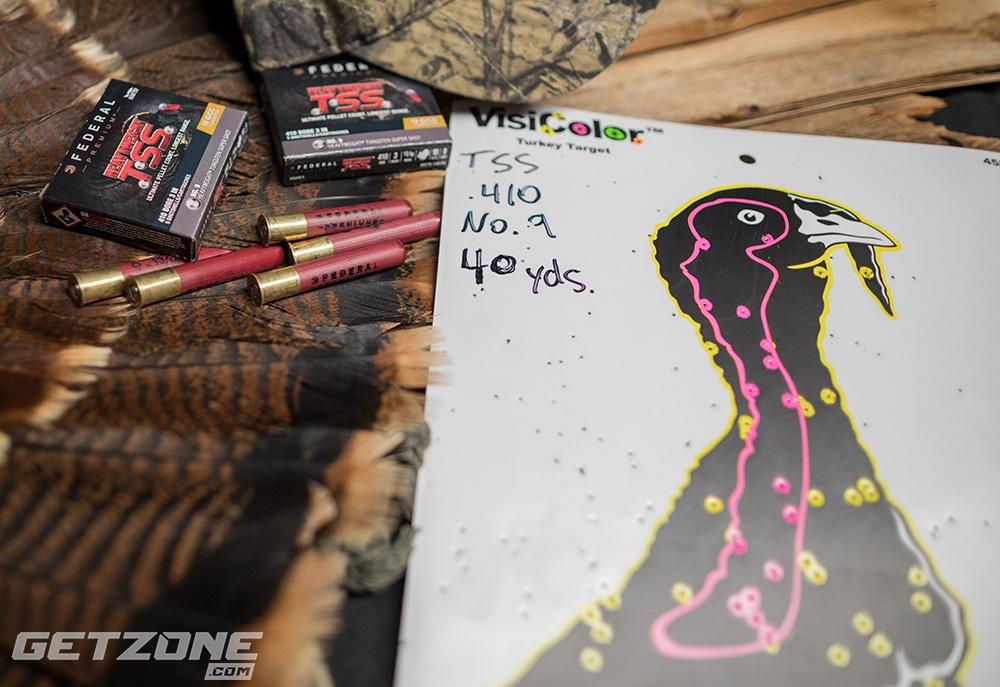 This level of performance has allowed Federal to offer a .410 version of their HEAVYWEIGHT TSS load, which effectively turns a light-kicking sub-gauge gun into a highly effective gobbler weapon. The 3″- 13/16-ounce .410 HEAVYWEIGHT TSS #9 load houses an impressive 295 pellets, which makes it an efficient turkey killer. If you’re planning on sticking to shotguns with larger bores there are plenty of HEAVYWEIGHT TSS options; there are four 12 gauge loads (3″ with 13/4-ounces of either #7 or #9 shot, and 3 ½” offerings with 2 ¼-ounces of #7 or #9) and two 20 gauge loads (3″, 1 ½-ounce with either shot size). As with Federal Premium’s Grand Slam offerings these shells come with a special buffer, and the full-length FLITECONTROL FLEX wad prevents this ultra-hard tungsten shot from contacting — and potentially damaging—your gun’s barrel.  MSRPs range from $29.95 to $49.95 per box of five shells.