There are a lot of numbers on a box of ammunition, and for a new shooter they can be confusing. Luckily, once you know what you’re looking at, picking the right ammunition can be a simple process.

The caliber is usually listed plainly on the side of the box. It’s important to pay close attention this, since small details in caliber names can be the difference between well-functioning ammunition and a blown up firearm.

Frequently, right below the caliber, manufacturers will list the bullet size and type. Bullet weights are measured in grains, a unit of measurement nominally based on the mass of a single seed of cereal that is equivalent to about 64.8 milligrams. Different calibers will have different bullet weights, common bullet weights of a 9mm bullet for example include 147 gr., 124 gr. and 115 gr. Different guns will function differently with different bullet grains, and some will shoots the different weights more or less accurately. 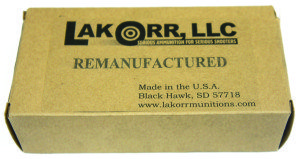 LakOrr Munitions, based out of South Dakota, sells custom made remanufactured ammunition that is high quality and dependable.
(Find out more at lakorrmunitions.com)

Bullet types are often abbreviated, the most common include Full Metal Jacket (FMJ) and Jacketed Hollow Point (JHP). Different bullet types serve different purposes, some are better for defensive purposes while some are more suitable for competition or target practice. Some guns will have trouble feeding certain bullet types, which is why it’s important to run your defensive ammunition through your gun to make sure it functions without a problem.

Many manufacturers will also list the muzzle velocity at different yardages on the bottom of their box. Muzzle velocity is useful for competitors interesting in calculating power factor, which will affect how they are scored, and those who want a certain grain to velocity ration for defensive purposes.

Cartridge length affects the power of the load, since more powder can fit into longer shells. The most important thing to recognize when choosing length is what your gun is chambered to handle. While 3” shells will fit into a gun chambered for 2¾” loads they should never be shot in one. The length is determined by the length of shell after it is fired, and shooting a shell through a gun that is not chambered to handle it could result in disaster.

Slugs will list the weight of the slug on the package expressed in either grains or ounces. Buckshot sizes vary from 000 (triple aught) to No. 4 shot. Birdshot sizes vary from 1 to 6 (steel shot) or 2 to 12 (lead shot). The shot sizes indicate the size of the pellets contained in the round, larger numbers indicate smaller pellets. Smaller pellets will hit with less force, but have a wider spread. Slugs and buckshot are favorite for defensive situations, while birdshot is generally considered ideal for hunting birds or shooting clay sports.

There are also some unusual shotgun rounds, such as Winchester PDX, which contains several disks and several lead BBs. The PDX Defender rounds list the gauge, length and velocity rather than discussing pellet size or slug weight.

How to Manipulate of a Pistol Caliber Carbine: PCC 101 Episode 3 The pistol caliber carbine is enjoyable because it shares the same manipulations as the AR-15. This well-known platform has become the most popular rifle in America for many reasons. The last several years, though have seen astronomical growth in new gun owners across […]

In this video, Dorgan Trostel (Burris Pro Shooter and PRS Champion), discusses how to acquire targets faster for NRL, PRS, and NRL22.  Specifically, how to build your shooting position by establishing natural point of aim, using bone support, and developing breathing control. Dorgan will walk you through each step of acquiring the targets, then tests […]

When it comes to buying a pistol, there are a few pistol basics to keep in mind. Whether you will buy your first pistol or add a new one to your collection, keep in mind that all firearms come in all different shapes, sizes, calibers, and lengths, and there are pros and cons with everyone. […]

Sighting In Your Riflescope – How To Dial In Your Scope/Rifle SystemIn this video we show how to properly zero your scope or red dot to maximize your rifle and optic system’s accuracy and capabilities. The video covers what “zeroing” means, as well as other terminology like line-of-sight vs line-of-trajectory, sight offset, point blank range, […]

Bushmaster Firearms™ is pleased to bring you the Bravo Zulu™, now chambered in 350 Legend. Combining a quality, 16” barreled, semiautomatic rifle with a straight-walled cartridge creates an impressive configuration for hunting medium size game. The 350 Legend’s down-range energy and penetration is superior to the venerable 30-30 Win, 300 BLK, and even has considerably […]