GetZone | antlers | The Aoudad Mountain Hunt You Can Afford
Hunting

The Aoudad Mountain Hunt You Can Afford

The Best-Kept Secret in Mountain Hunts: Free-range Texas aoudad are exotics, but don’t let that fool you. These North African sheep are right at home in the desert southwest and they make hunters work hard.

“They’re right there. Right above us, a whole band of them,” said guide Robert Curry of Back Country Hunts. I ran my binoculars down the length of the sun-bleached rock shelf and saw no movement except the rising heat waves.

In the thin broken shadows of the rock face high on the top of the ridge I found them. It made sense that the aoudad were hiding from the south Texas midday sun, but I couldn’t have imagined that any creature so large and heavy could find stable footing on the sheer rock face. I had underestimated these wild sheep, though, for there they were, staring down at us from their perch seven-hundred feet above. In the midst of the group was a big ram with horns that swept in wide arcs around his heavy, golden mane.

“He’s a good one, the kind we’re after, Robert said, there’s only one way to get to him.”

I knew that. If you want a good aoudad you had better be ready to climb, and as the big ram and his ewes disappeared over the top we gathered out gear and set out in pursuit. 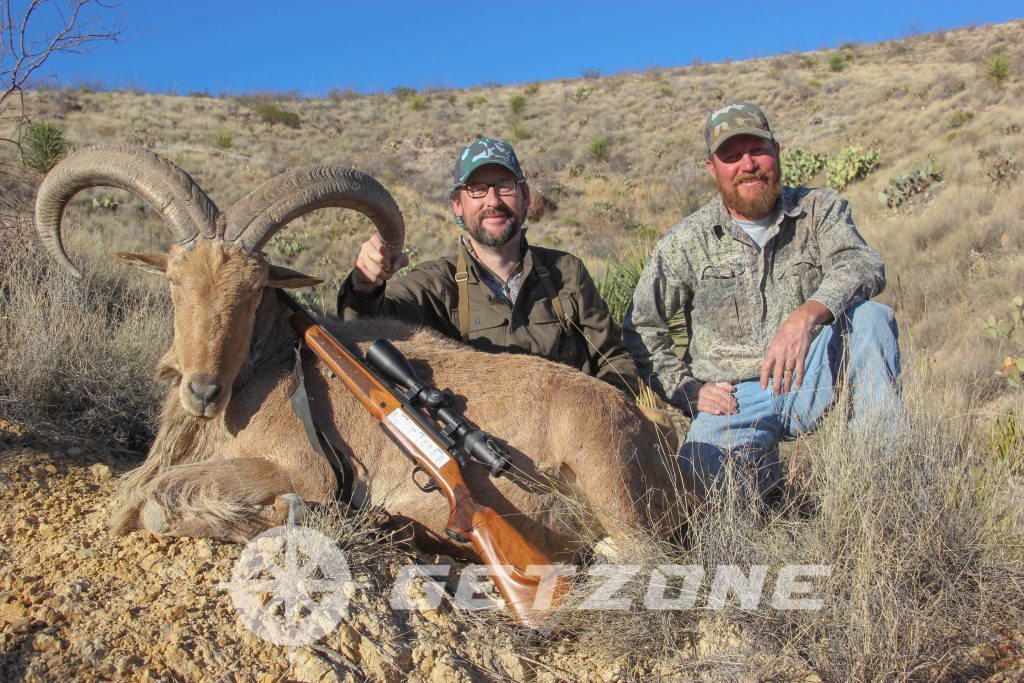 The aoudad, or Barbary sheep, is the only member of the genus Ammotragus and there is some debate as to whether these North African natives should be classified as goats or sheep. Just after World War II the first Aoudad were released in the American Southwest, first on ranches in New Mexico and then in Texas. Having evolved to withstand the fierce conditions of the Sahara in Algeria, Morocco, and Libya, these animals had little trouble surviving in ranch country—but they had little respect for fences. In short order Barbary sheep were running wild throughout Texas, and they were particularly well-suited for the Big Bend area along the Mexican border.

Today there are an estimated 25,000 aoudad living in Texas alone, far more than still exist in their native lands. Since they are considered an exotic in Texas there are no seasons or bag limits and they can be hunted after purchasing a general hunting license. In addition, since they compete with and may spread disease to native sheep many ranchers want to see these non-native game animals eradicated. But don’t let the aoudad’s classification as an exotic fool you; these animals are completely wild and free-ranging, and they’re every bit as cagey as any other wild sheep species. The difference, though, is that aoudad offer a mountain hunting experience that is accessible to the average hunter; there are no tags to draws, to points to earn, and unlike most mountain sheep hunts—which will cost you anywhere from $20,000 to $40,000, aoudad can be hunted for as little as $3,000 on a guided hunt.

In Texas aoudad live in bands consisting of ewes and lambs and a dominant ram as well as bands of similar-aged rams, although there are no set rules and it’s not uncommon to see multiple rams in a single mixed herd. What is consistent, though, is the aoudad’s affinity for rough country. But that’s one
of the great draws of hunting these sheep in the desert mountains, and it’s no longer a secret that these animals provide a challenging mountain hunt without the high price tag. If you’re planning a hunt to aoudad country you need to be in sheep shape. 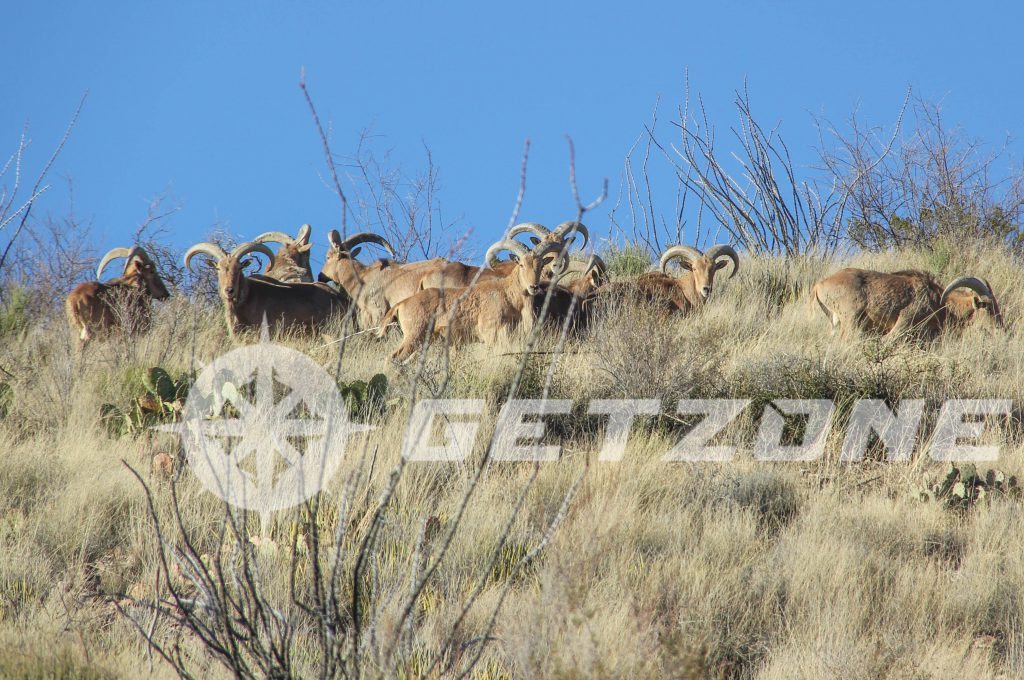 It took Robert and me the better part of an hour to hike from our glassing position at the bottom of the mountain to the stony crest where we had last seen the sheep. It would be impossible for us to reach the ledge where we had last seen the sheep so we would have to climb directly over the top and hope to catch them coming down the other side. The final portion of that climb—perhaps the last hundred yards—was steep country that required careful attention to where each hand and foot was placed to avoid both a fall and a bite from an angry rattlesnake.

Finally, though, we crested the ridge and began glassing the canyon below. We saw a handful of sheep, mostly ewes and lambs, far below and a single band of young rams in a saddle to our right. But the big aoudad was nowhere to be seen.

Neither of us could figure out how we had missed the ram. He’d been with his band, but there was very little chance that he would have left them and crossed over the opposite rim. Likewise, if he had crossed in the saddle to our right where the young rams congregated we would have seen him. When we caught our breath Robert looked at me and mouthed the words, “He’s still here.”

But where? We had an answer within a few minutes when we heard a faint grunt and the sound of light pebbles trickling down the mountainside. The ram, it seemed, was directly below our position.

Held the Mossberg rifle close against my chest and dropped the magnification on the Swarovski scope down to 3, as low as it would go. As I eased out onto the steep ledge the ram bounced onto a rock within fifty feet of me. It’s likely that both of us were equally shocked and as the aoudad turned and ran down the cliff face I fired the .30-06 twice in rapid succession, knowing I had hit the sheep but with undetermined results.

There are few animals tougher than a large aoudad ram. These are, after all, African game animals and their reputation for tenacity is well-deserved. I’ve seen aoudad shot well with powerful calibers that didn’t go down and were lost, and I wasn’t going to let that happen. I bounced to a position on the rock where I had last seen the aoudad and, with the Mossberg .30-06 on my shoulder, I scanned the valley below. I saw him break cover behind an ocotillo bush and fired a final finishing shot.

The hunt for that aoudad was indeed a true mountain hunting experience, but it was one that I—and you—can afford. Before you give up on the dream of hunting mountain game, feeling certain that you’ll never be able to draw a tag or afford a hunt while you’re still young enough to tackle steep terrain, take a hard look at aoudad hunting. Just don’t make the mistake of thinking that these exotic sheep are an easy mark.