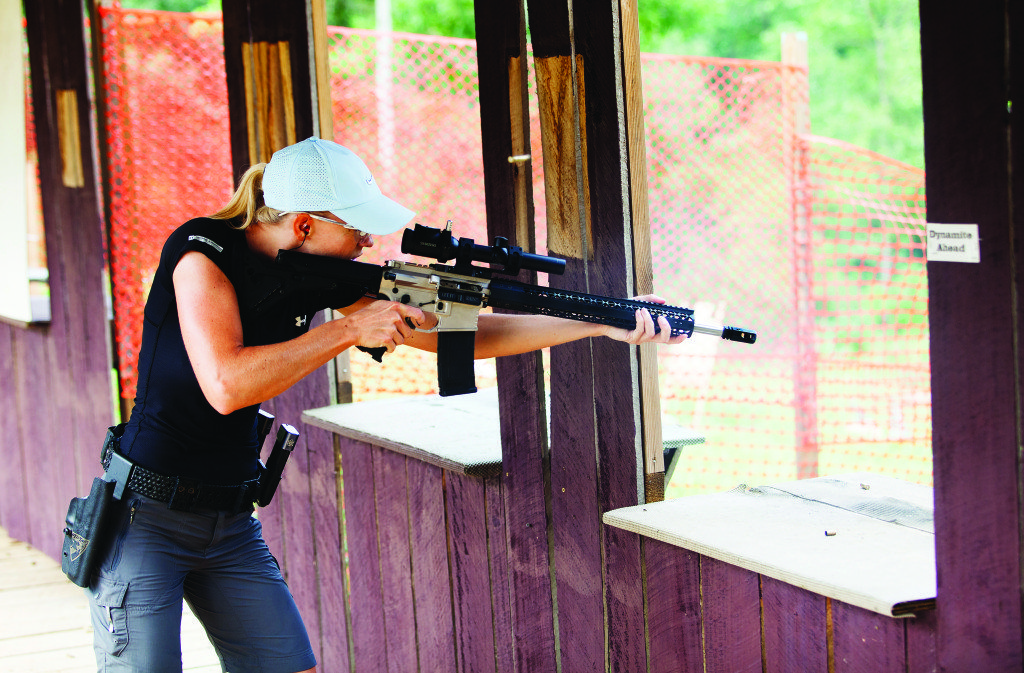 Every year, in the heat of the Kentucky summer, Rockcastle Shooting Center hosts their epic 3-gun match, drawing competitors from around the world. This year, the event held a unique opportunity for a group of women from a variety of backgrounds to learn about the sport.

Rockcastle, working with Babes with Bullets, generously set aside 40 slots for a group of women with little to no 3-gun experience to sign up at a vastly reduced rate. I was one of those women, and until I arrived I had no idea how lucky I was.

The first night at the wine social, Deb Ferns, one of the hard-working women who had helped put the event together explained exactly what was going down. The women were divided up into several different squads (all shooting the amateur match, of course). Each squad would have two to three of the top female 3-gun pros following them around to coach and give advice where it was needed.

For my squad, that meant that Stephanie Payne, Katie Harris and Kay Miculek were with us through the whole match. I was a little flabbergasted when I heard the Kay Miculek would be one of my 3-gun coaches for the week. 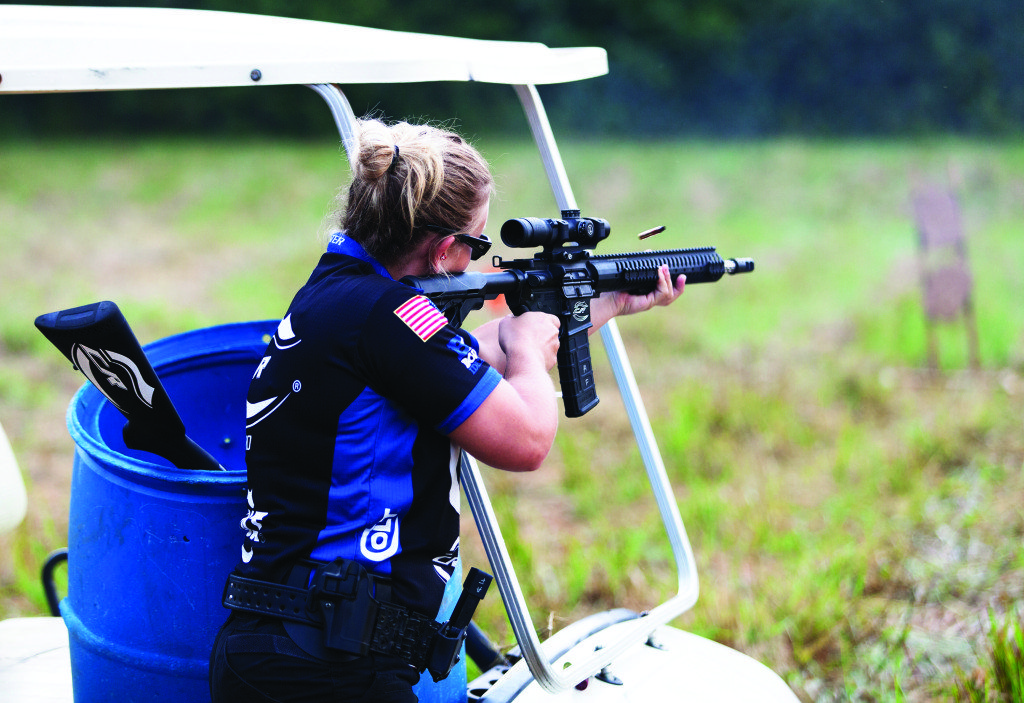 For me, having these women at my side was a good thing from the first stage. Stage 1, also the first stage we shot, was the only all-shotgun stage of the match. For someone whose practical shooting experience consists almost completely of USPSA and whose shotgun experience consists almost completely of sporting clays, the idea of running around with a shotgun, much less reloading one, is completely foreign.

I knew shotgun manipulations were going to be a major weakness for me going in to the event. In anticipation, I bought a Saiga-12 so I could just treat it like an AK-47 instead. My plan was genius, flawless, until it was time to shoot. I had put a few rounds through the shotgun a few days before I left for the match to make sure it worked. Yet when I got to the match, it didn’t work. Not even a little bit. I couldn’t even chamber a round.

Luckily for me, part of the Babes with Bullets program was the opportunity to borrow gear if we didn’t have it. Which meant, despite this setback, I was able to use the Mossberg JM930 that the program was lending out. I was also able to borrow shell caddies to carry my extra ammunition around.

Sadly, none of this equipment included magical properties allowing me to immediately be adept at using it. The first stage, I struggled my way through trying to stuff rounds into the shotgun’s tube, with Stephanie Payne behind me constantly reminding me when and how to reload.

With the help of Stephanie and Katie stage-by-stage, and a little one-on-one time with Kay working on stance, by the end of the week I was reloading and managing the shotgun with, I won’t say ease, but definitely more skill than I had begun the match with.

This was a unique and wonderful opportunity for every woman that attended to learn about the sport of 3-gun at one of the largest and most prestigious matches in the country. 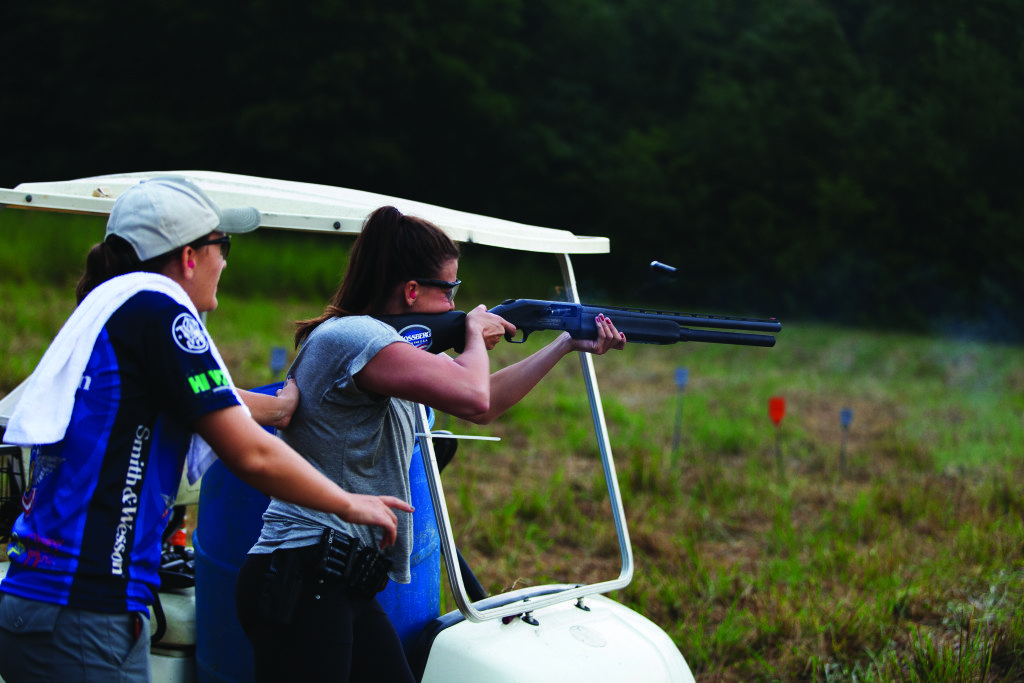 Located in Park Mammoth, Rockcastle Shooting Center encompasses over approximately 2,000 acres. The Center offers a 12-station Sporting Clay course and a 5-stand course that overlooks a cattail pond. The range is also host to rifle ranges stretching from 50 to 1,000 yards.

Stages at the Rockcastle 3-Gun match were hosted on rifle ranges, on the range’s permanent Cowboy Action shooting town and among the property’s multiple pistol ranges. They were spread out, so that driving between stages was frequently required, but unlike many 3-gun matches it was easy to drive up and park right next to any stage you were about to shoot at.

The Rockcastle Shooting Center also hosts a large lodge and restaurant, where, if booked well ahead of time, shooters can stay for the duration of the event they are attending. There is also a winery. Grapes are grown on the grounds and the bar opens up after the range shuts down so guests can enjoy bottled brews and Rockcastle’s own house wines.

Rockcastle Shooting Center is more than a gun range. It is a full resort for firearm enthusiasts of all kinds. The facility hosts world-class instructors offering classes in everything from sporting clays, to personal defense, to hunter’s education and wilderness survival.

For more information check out rockcastleshootingcenter.com.

Babes with Bullets camps are held nation-wide, the program offers firearms training programs for women interested in learning any number of skills: from beginning handgun to introductory AR-15 handling. Each camp is taught by national and world firearms champions, with none other than Kay Miculek as the head instructor.

To find more information, or to sign up for one the Babes with Bullets camps, head to babeswithbullets.com.

By Shelley Rae. Originally published in the November 2013 issue of GunUp the Magazine.