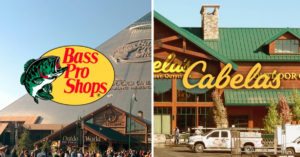 Whether you like to hunt, camp, fish, or hike, chances are better than not you’ve visited at least one of these stores in the last year. Bass Pro Shops and Cabela’s, two major players in the world of hunting and fishing retail, have been rumored to be joining forces since November, 2015 when BPS first showed interest in purchasing their primary competitor.

Earlier this week Reuters reported that BPS has already made the necessary financial connections to make a massive bid to buy out Cabela’s. Partnered with Goldman Sach’s, BPS may finally have the resources they need to outbid a group of unnamed competitors looking to buy in to the outdoor provision game.

According to Reuters, the sale is still in the early stages but BPS is firmly committing to their bid. Competition for the purchase is limited due to the Cabela’s brand association with firearms. Many marketing firms are hesitant to buy into the firearms business not wanting to upset potential investors. Goldman Sach’s, however, pulls funds from private investors unique to each deal. Therefore any investors afraid of entering the firearms market have the opportunity to opt out.

As of Tuesday, Cabela’s market capitalization reached $3.6 billion with shares sitting around $53.51 a piece. Offering experiences like indoor shooting galleries, giant aquariums, and high quality taxidermy displays, Cabela’s and Bass Pro shops offer a unique in-store experience that cannot be rivaled by online retailers. A merger of the two companies has the potential for improved savings at the cost of the closing the Cabela’s corporate headquarters in Sidney, Nebraska. Due to the early stages of the sale, neither company was able to make a comment about the potential closure.

No information has been released about potential store closures, especially for BPS and Cabela’s retailers within a short distance of one another.