Located just over two miles from the heart of the strip, this five-acre complex features an indoor shooting range and military vehicles scattered across the tarmac to create a modern military theme.

From the moment you pull off the road into the parking lot — and are immediately greeted by a half-track — it is clear this is no ordinary gun range. The complex is encircled by camo-covered fences and sandbags are stacked high as if to ward off incoming mortar fire. Humvees and an M35 truck all sit waiting for their next rider. Oh, and let’s not forget the UH-1C Huey! In total, Battlefield has a fleet of more than twenty-five military vehicles, from Jeeps used in WWII to 2.5- and 5-ton carriers used in conflicts from Vietnam to the present day. Don’t feel like driving from your hotel to the facility? No problem. They will pick you up from your hotel in a Humvee.

Upon walking in the front door, you instantly feel as though you have walked into another world, you are no longer a block from the Vegas Strip. Over eighty percent of the employees of Battlefield Vegas have served in the armed forces, and those who haven’t are mostly sons and daughters of those who have. Ron makes a determined effort to help his brothers and sisters in arms and goes to great lengths to hire veterans. Additionally, they are encouraged to wear the uniform from their branch of service, which means it feels something like walking around a military compound. That being said, there are little things that are done to distinguish these vets from those on active duty. First, rather than the standard nametape for their branch on their left breast, all employees wear a patch saying “Battlefield”. Second, rather than listing a vets last name, as is done in the military, all employees wear a patch with their first name. These little touches server as an homage to the military backgrounds they all share.

What stood out most for me was how much every person at Battlefield Vegas seems to love working there. I mean, what’s not to love? You help first time full-auto shooters — and often times first time shooters — have an amazing experience. Bursts of fire on the range were regularly followed by smiles, laughter and amazement. I asked Carlos Munoz, our Range Safety Officer (RSO), whether he ever gets tired of people getting positively giddy over shooting a machine gun for the first time. “Are you kidding?” he said, “That’s my favorite part of the job!”

Related Stories: The Black Rifle: The Film Career Of The AR-15

I was also impressed by the individual attention that each and every customer receives. Safety is the number one priority of the staff at Battlefield Vegas, but customer satisfaction is a very close second. Once you have purchased your package, you are paired up with your own RSO who loads your magazines and personally walks you through the operation of each weapon, all while giving you a bit of history. On the range our RSO asked us about our experience level with the individual firearms, full-auto, and shooting in general so he could tailor his instruction to our experience level. As we moved from one firearm to the next he explained how to operate each one and detailed the peculiarities of each. While shooting the RSO remains by your side to help with any issues you may have. A large part of the Battlefield Vegas clientele are first time shooters and the RSOs do an excellent job of making sure everyone is comfortable and safe at all times. 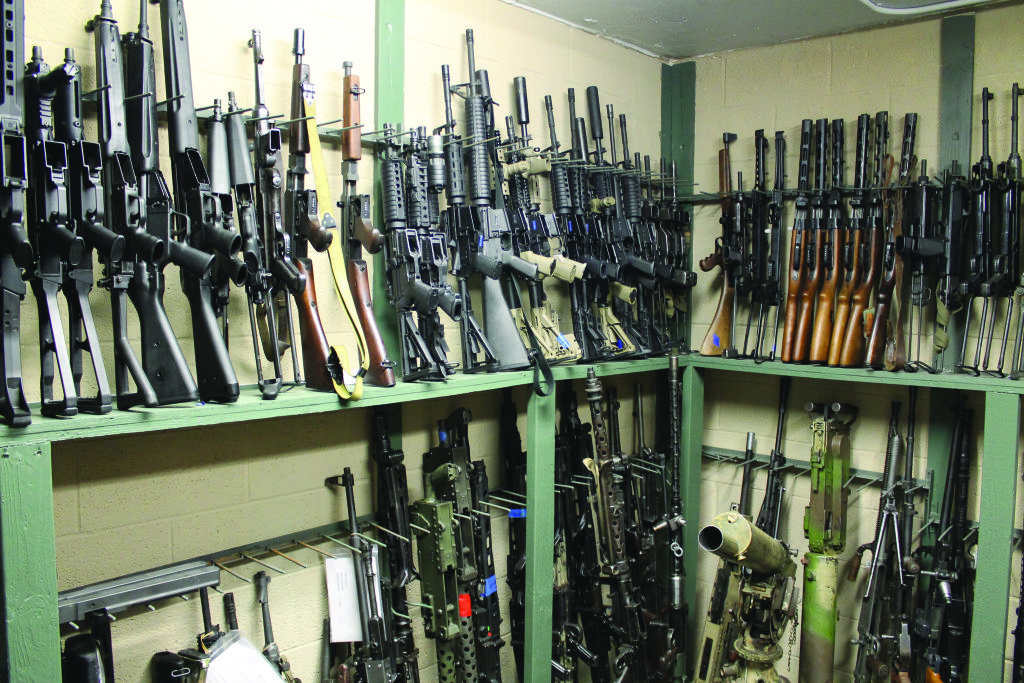 We were particularly interested to learn that our RSO had used a few of the weapons we were firing during his last deployment in Afghanistan with the Nevada Army National Guard. A member of the 1st squadron, 221st cavalry (aka Wildhorse Squadron), Carlos served as a Specialist E4 in Afghanistan from April 2009 through April 2010. Having used these weapons in actual combat, he was able to provide his own insight into how the weapon performed on the battlefield and the difficulties of carrying a full MG kit. This added a bit of perspective to the exhilarating experience of shooting these firearms.

A machine gun range in Las Vegas is not exactly a new concept. Within a mile of the strip there are at least a dozen different ranges where you can rent and shoot guns. Having only visited this one, I cannot speak to the experience at other ranges, though it is hard to imagine better customer service than I experienced at Battlefield. What I can tell you is that the gun selection at Battlefield is second to none. There are not many places that I know of where you can walk into a room and see an MG42 laying next to a Mk 48, or an Uzisitting next to a PPSH-41.

They have the standard assault rifles like M4s, M16s and SCARs (both light and heavy) as well as the classics like Uzis, Thompsons and Garands. While these firearms are not readily available to the average Joe, they are commonly found at ranges all around Las Vegas. What sets Battlefield apart from their competition is their collection of less common guns; from German MP40s, Soviet PPSH-41s and Stens toSturmgewehrs 44s, MG42s and even Vickers machine guns. Battlefield’s collection is not to be beat. In fact, Battlefield boasts what they claim is the “largest collection of US and foreign weapons available for public use in the United States”. 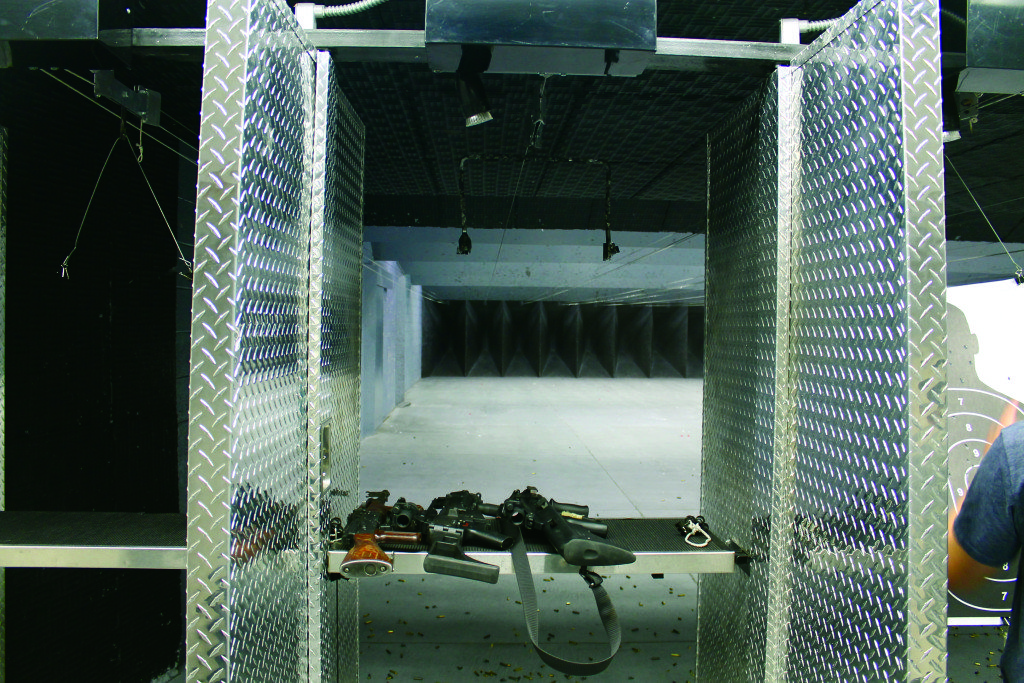 During our tour of the “vault”, we were also treated to a history class in which we learned various tidbits of information about the weapons. Once again, I was very impressed by the depth of knowledge that Ron possesses about each of the weapons. One story, in particular, stuck with me. During World War II, Germans we able to easily pick out their British counterparts on the battlefield because of the “Chicken Wing” stance they adopted when firing the Sten Mk II, this stance resulting from the way the weapon is held due to the side-mounted magazine. During the war the, Germans managed to capture a small number of Stens and were forced to adopt the same “Chicken Wing” stance of the British when using the weapons. This resulted in multiple cases of friendly fire where another German, spotting the stance, would shoot one of their own. The German solution was to cut the weapon in half, rotate the front 90 degrees, and weld it back together. This resulted in a weapon with the same profile as an MP40.

The quantity of each weapon they have in stock is another feature that sets Battlefield Vegas apart. The biggest complaint that Ron heard from his research of other ranges is that popular weapons were continually unavailable leading to wait times measured in hours. You arrive at the range to shoot an MP5 but have to wait for the three other people who want to shoot it first. Or worse, the weapon is out of commission for some reason so you can’t shoot it at all. Ron vowed not to let this happen. Their most common weapons, (MP5s, Thompsons, AK-47s, etc) are stocked by at least the dozen. With their less common guns such as the PPSH-41s and Stens, I did not see a single one that was stocked at less than 5. Even their specialty guns like the MG42s and RPDs have at least a second, if not a third and fourth.

Ron says there is still more to come for Battlefield Vegas. There are plans in the works to add a 32,000 square foot outdoor airsoft field as well as a nearly 16,000 square foot indoor shoot house where shooters can compete against the seasoned veterans in a real-world special operations scenario. Needless to say, we look forward to giving that a try when it opens. There are also plans to open a military museum.

On a personal note, I want to thank Ron and his staff for the wonderful time that they showed us while we were visiting. Also, as a computer nerd who never has served a day of combat in my life, I want to express my sincerest gratitude to Ron, his partner David, all their staff and everyone else who has served in the armed forces. We owe you an eternal debt of gratitude and thank you for your service.

By Zack Warburg. Originally published in the June 2013 issue of GunUp the Magazine.

Binge Playlist: At the Range Season 2 Presented by Beretta | GetZone.com