Behind The Booth At SHOT Show 2014 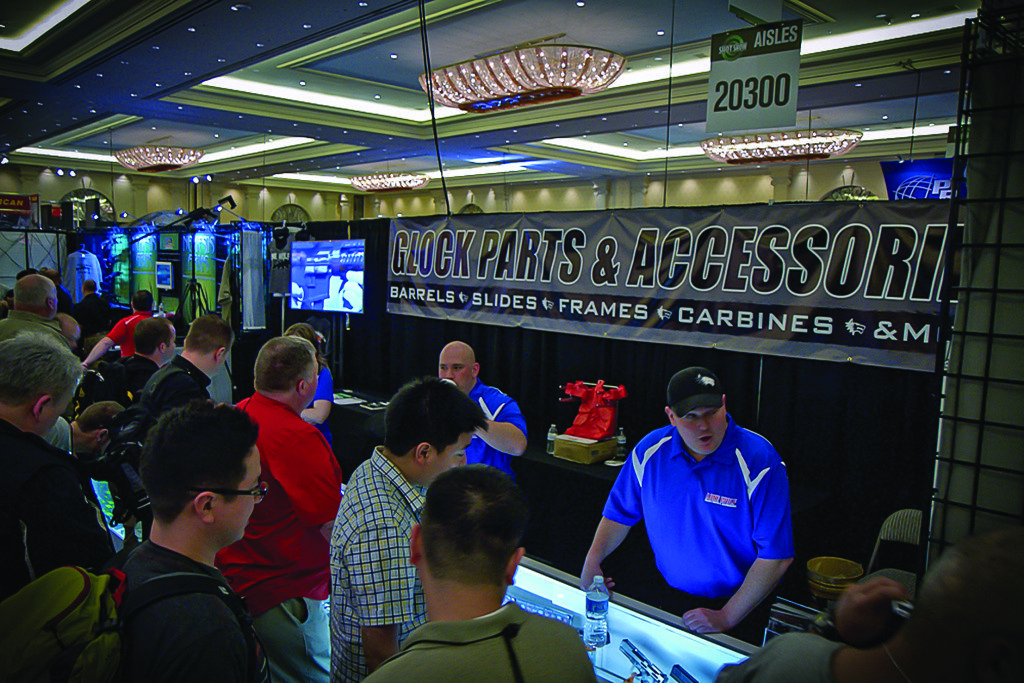 The Shooting Hunting and Outdoor Trade Show, or as it is better known, SHOT Show, is the annual pilgrimage to Las Vegas, Nevada for those engaged in the firearms industry. It is a chance to catch up with old friends, meet new clients, and see all the newest firearms. For attendees it can be an overwhelming experience, with aisle after aisle of guns and gear on display. After the show, Las Vegas offers endless nightlife opportunities. What about attending SHOT as an exhibitor? This is an often-overlooked aspect of the show.

It is inevitable, when telling someone that you are heading to Vegas for SHOT Show, that their eyes widen and proclaim that you are lucky. They assume the SHOT experience will be the same for an exhibitor as it is for an attendee. Ask most exhibitors, especially the ones that actually plan the pilgrimage for their company, and they will probably tell you a different tale.

I am lucky enough to be responsible for show planning for Lone Wolf Distributors. We are a medium sized company and planning SHOT takes quite a bit of resources, both before and during the show.

BEFORE THE SHOW
Show planning begins long before the event date. If you are lucky enough to be able to get booth space at the show you must sign your contract almost a year in advance. If you are an existing exhibitor you will generally sign up for next year’s show at the current year’s show. Once you are signed up the real planning begins.
Travel and accommodations are always a challenge. You are best served by booking hotel rooms for the next year while at the current show. This allows you to lock in a cheap rate. SHOT 2015 is the first year I have been able to do so and it has saved us over 100 dollars per night per room. Booking accommodations are a best guess effort. You generally do not know how many rooms you will end up needing but you can take your best guess and adjust once the show is closer. Flights are another story; these are generally not booked until two months or less before the show. Any sooner than that and we do not have an exact list of who will be traveling to the show and when they will need to arrive.

New products take quite awhile to get ready and sometimes it is hard to get projects finished before SHOT so we can display them at the show. For instance, this year some aspects of a few of the new products we intended for the show did not make it due to time constraints. It is all part of the game and you just have to learn to roll with it.
Once we have a good idea of what the new products and our displays will be like we are ready to mock up the booth. In our case, I will use a section of our office to mock up the booth space. This allows me to build the booth full scale to make sure all the pieces are there. Once the booth is built I can bring in our Creative Director to schedule new graphics and get them ordered. Then I will work with our shipping to make sure all the products we need will be available for the show. Once it is fully mocked up and stocked with product I can tear it all down and box it up. The mockup process takes close to three weeks to complete.

Once we are all boxed up we can load our trailer and send our driver along with truck and trailer to Las Vegas. We coordinate our flights to bring the rest of the crew down almost the same time as the driver rolls into the marshaling yard. The marshaling yard is a holding area where they stage all incoming vehicles. They let you unload your trailer once your turn is up. As soon as the trailer is unloaded, the real fun begins. This year that happened on Sunday afternoon prior to the Tuesday show opening.

If you have never seen a convention floor before opening day you would be amazed what the show organizers can accomplish in a short time. On setup day the aisles are jam packed with trash, moving crates, product, people, and forklifts. It is a chaotic symphony that goes relatively smoothly, all things considered. We generally spend most of the day getting our booth unpacked and setup. There is always a moment of dread opening boxes hoping that everything made the journey intact.

I generally take the time after our own booth is setup but before the official show is open to browse other vendors booths. This can be a crapshoot though because most booths are not built yet and there is not much product on display. After browsing the setup booths its time to relax. This is also known as the calm before the storm.

SHOW TIME…
The opening is always nerve-racking. As you walk from your hotel towards the show floor every bad scenario plays out in your head. Did I forget anything? Did other people working on booths break anything? This year we lost an acrylic catalog holder by a forklift; thankfully I had spares. The amount of people in the hallways outside the exhibit room is astounding. If you need to walk in the opposite direction of traffic you really know what a salmon feels like swimming upstream. As you make your way through the guarded doors you feel like walking through a total transformation. Just 24 hours before it looked like a tornado had come through, yet on opening day it is beautiful. It is filled with booth workers putting the final touches on their displays before the doors are opened to attendees. One last wipe down of the display cases and wait for the oncoming crowds.

Roughly five to ten minutes after the doors are opened to attendees the aisles are crowded. The first people at the booth are enthusiastic; they sought us out and came here first to make sure they saw all the custom Glock parts we brought to display. Then wave after wave follow. During most of the show there are at least three people deep along the whole booth waiting for their turn to talk to one of us. We field question after question, hand out catalogs and business cards, and shake more hands than a politician.

The show hours are 8:00 a.m. to 5:30 p.m. for the Law Enforcement bay we are in, which means booth staff generally works 7:00 a.m. to 6:00 p.m. Any visions of the Las Vegas nightlife generally slip away after working nonstop for 11 hours. Most of our crew just wants to get something to eat and head back to our hotel. This repeats for four days. Generally at least one person will get sick during the show week. It is hard to fend off any sickness with the amount of people we come into contact with, our lack of sleep, and poor on the road nutrition.

I always try to run around the show floor every day before it opens to check out what I can but generally everybody else is doing the same so the booths aren’t staffed so any questions will have to be held until later. If I see a slowdown during the show I will try to quickly make a tour of nearby booths and talk with industry friends I don’t get to see often. This does not happen very often, most times it is to and from the bathroom!

The last day of the show ends at 4:00 p.m. and then the real work begins. As soon as the last attendee clears the booth it is a mad dash to tear down and pack everything. This generally is accomplished in a mere two hours after starting. The real wait is getting your truck and trailer loaded. This year we did not get the trailer loaded until nearly 10:00 p.m. which meant sitting in our torn down booth waiting for four hours while our truck driver sat in the marshaling yard since 2:00 p.m. to get loaded. Once loaded, the driver heads directly back and we await our flights home.

Does SHOT seem fun as an exhibitor? I hope to not give you a bad impression of it. It is simply a ton of work for a week worth of exhibiting. Would I rather be in any other industry? Not a chance! The SHOT Show is a great chance to see new products and old friends and I would not miss it for the world.

By Zack Carlson. Originally published in the March 2014 issue of GunUp the Magazine.