GetZone | Hunting | Bowhunting: How to Find Your FOC
Hunting

Bowhunting: How to Find Your FOC

I was hanging out at the local archery pro-shop with the teens in my High School Archery club. The kids were having fun flinging arrows and poking holes in paper. I was chatting about different arrow setups with the shop owner, as will happen in an archery shop, and we were discussing the FOC of various arrow set-up we have used. After our conversation came to its inevitable conclusion, and young lady in the archery club called me over. “Mr. Grippa,” she said. “Umm, I heard you guys talking about your arrows, and I had a question.” “Sure” I replied, “What did you guys mean when you were talking about the FOC of your arrows?” That’s when I remembered that not everyone has been shooting a bow most of their lives and is as obsessed with this stuff as I am. So after I gave her a brief run down, it occurred to me that she probably isn’t the only person out there that may have the same question.

What is the FOC of an Arrow?

My guess is there are a lot of bowhunters that never think about or care to think about the FOC. They get their arrows cut, glue in the inserts, screw in the broadheads and never give it a second thought.  If you’re like me and primarily hunt whitetails, that scenario works. A 100 grain head, and an insert in the front in will provide a good enough FOC to do the job.  If that’s you and you aren’t worried about it, then you will can probably stop right here and move on to the nest article.  If you think you may need to know how to find your FOC then please read on. So here is how to find your arrow’s FOC. 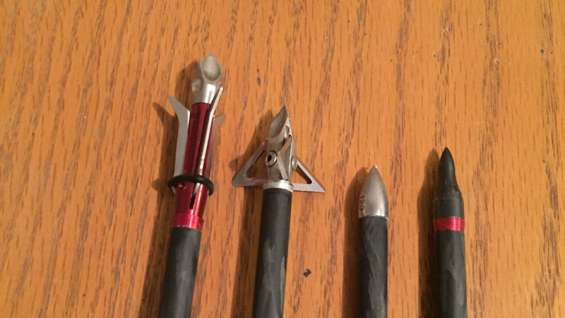 Any change in points will change the overall length of the arrow and ultimately will change the FOC. Remember to always measure all the way out to the tip of whatever point you are going to use.

First step, measure the full length of the arrow. From the very back of the nock all the way to the tip of the head.  Divide that length in half to find the center. Mark that spot with a pencil.

Next, balance the arrow on a relatively narrow plane. I usually use the back of the blade of one of my pocket knives.  Once it balances mark the balance point of the arrow with a pencil. 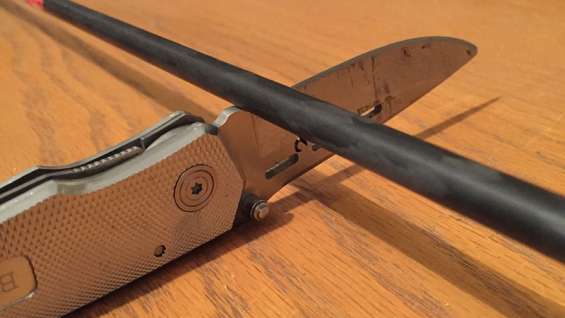 When balancing the arrow to find the fulcrum I usually us the back part of the blade of my pocket knives.

3rd step is to then measure the distance from the balance point to the measured center of the arrow.

Related Videos: 5 Tips For Bowhunting Whitetails From The Ground 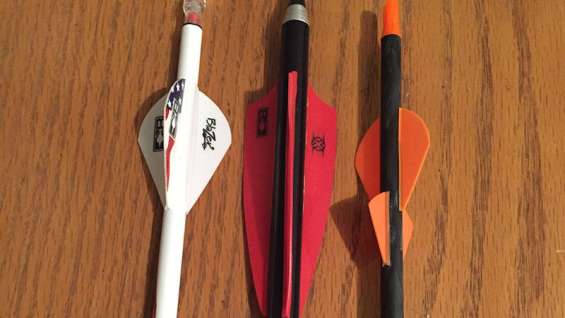 Any change on the back end of the arrow either longer, heavier vanes, or a lighted nock can change your FOC. Even a wrap can make a small difference. Any weight to the back end will yield a smaller FOC.

What Does This Tell Us?

So now that we know how to find the FOC what does that tell us and what FOC do I need? Well that really depends on what you intend to do with that arrow. In my opinion an arrow that is being set up for a 3D target bow can have a different FOC then an arrow that is going to be used to hunt big game.  You will find that opinions will vary but here is what I have found.

For an arrow I am going to bowhunt whitetails with it will have a larger FOC than my 3D arrow. I want my hunting arrows to have an FOC of at least 10% but I’d prefer them to be about 12%.  A larger FOC means a little more weight up front and that arrow will deflect less. If I want it to penetrate and drive through bone, then I will strive to get that larger FOC.  An arrow I’m building for a 3D set up is one that I want to have a flat trajectory. A smaller FOC will give me that, all things being equal. So what is the best for 3D?  Great question.  I have talked to guys that like theirs to be as small as 6% and others prefer 10%.  Here is their line of reasoning. Small FOC equals flatter trajectory, that is true, but I have found that 5% to 6% and that arrow gets a little squirrely down range, especially in some wind. The people in the larger the FOC camp are concerned about hitting arrows in the target and deflecting out of the 12 or 11 ring.  I think both are valid points, and that’s why I aim for the best of both worlds. I set my 3D arrows up to have an FOC of around 9%. I feel that it is happy medium between flight and deflection.

Hopefully this clears things up and you now know how to find the FOC of your arrows.  I also hope that everyone now has better understanding of what the FOC of your arrow means for your particular set up.  Happy hunting, shoot straight and I’ll see you in the deer woods.