GetZone » New Gear and Guns » Build Your Own Lightweight .22 AR

Build Your Own Lightweight .22 AR

New Gear and GunsNew Gun OwnersRifles and Accessories
By GetZone

I have found the biggest detractor to rifle shooting for women is the weight of the rifle. My girlfriend can handle pistols just fine but when it comes to rifles the extra weight is unwelcome. The argument can be made that the extra weight on a heavier recoiling rifle helps absorb the felt recoil. This is fine for those heavier recoil rounds but with .22 LR or .223 rifles the lighter the better. My quest for a lightweight .22LR rifle began with the desire to have AR-15 ergonomics. I’d rather train on the AR platform so that training would translate to a .223 AR-15 when the time is ready. And so the build your own lightweight .22 AR project (and article) began.

How to Build Your Own Lightweight .22 AR – DIY Project

The other detractor to rifle shooting is the noise. Heavy-weight and loud noise is a recipe for a new shooter to not want to continue training. A suppressor makes sense in this situation but only if it can keep the overall package lightweight. This is where the compact and lightweight AR-22 SB-X upper from Tactical Solutions and the LW-15 polymer AR-15 from New Frontier Armory come into play. 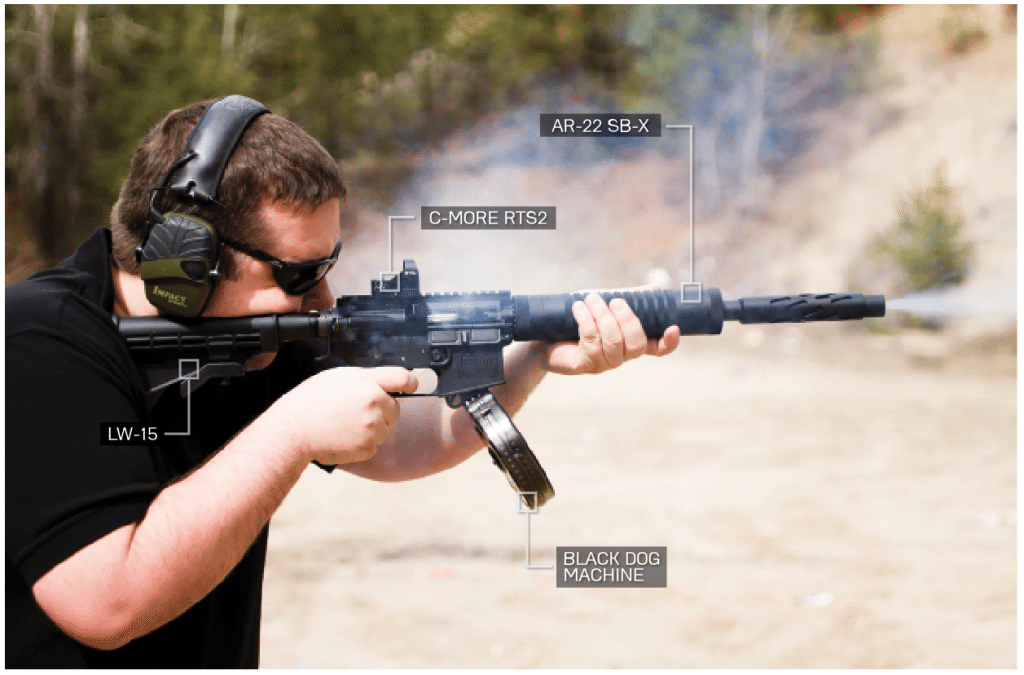 One of the pitfalls of attaching a suppressor to a rifle is the added overall length of the rifle. Sure you can cut the barrel down to a more manageable length but then you are subject to registering the gun as a short-barreled rifle and paying the 200-dollar tax stamp. In some states, this is not even allowed. Tactical Solutions has an innovative way to skirt this problem. The AR-22 SB-X upper they offer is actually a 12.25-inch barrel with a permanently attached shroud that brings its overall barrel length to 16.5 inches. This allows you to slip the suppressor down into the shroud instead of it hanging off the end of a 16-inch barrel.

The barrel is a lightweight 6061-T6 aluminum tube with a 4140 button rifled steel liner. Coupled with a Hogue free float forend, the SB-X upper is both lightweight and compact. The package includes everything you need, except the lower receiver, for an MSRP of 650 dollars. Tactical Solutions even includes a Black Dog Machine magazine. Find out more about the SB-X at tacticalsol.com.

New Frontier Armory has long been known for their polymer AR-15 lowers. By producing the lowers from polymer instead of the traditional aluminum you save 7.2 ounces. When planning to build your own lightweight .22LR AR keep in mind that every ounce counts.

NFA sells their LW-15 complete polymer lowers for 119 dollars retail. This is an amazing price considering this is a fully built lower receiver ready to pin on an upper. The LW-15 is offered with a lifetime warranty for those who fear polymer will not hold up. I have been running NFA lowers for a while and have not had any cause for concern.

The actual receiver is not the only polymer part of this lower; even the fire control group is plastic. I was skeptical that a polymer fire control group would yield a decent trigger pull but all my worries subsided the first time I pulled the trigger. The composite parts work together to produce a clean crisp 4.5-pound trigger pull. If you still have concerns about a composite fire control group no problem, any mil-spec units can be dropped right in. I’ve tested a Daniel Defense and Geissele trigger unit in my polymer lowers with no issues.

Black Dog Machine is pretty much the standard for large capacity .22 LR drum magazines. They have it down pat and have the patents to prove it. They are so good that Tactical Solutions chose them as their OEM supplier of magazines for their .22 LR AR uppers. I tested the rifle with the 50-round drum and 25-round stick magazines from Black Dog Machine.

The drum has a port on the back that allows you to use your thumb to relieve tension on the feed lips, which makes loading pretty simple. You don’t have to mash down the next round to load, simply rotate the drum with your thumb and drop the next round in the feed tower.

The nice thing about BDM’s drums is that the feed tower is interchangeable. You can buy different towers to accommodate a Ruger 10/22 or S&W M&P15-22.

While weighing my options for this rifle build I really wanted something that was lightweight but easy to use. I was quickly drawn to C-MORE RTS2 sight. It is similar to their competition sights, which are widely chosen due to their large windows and unobstructed sight pictures. The RTS2 by comparison is much smaller. It does feature a rounded glass lens instead of the traditional tombstone type lens found on most micro red dot sights. The rounded glass presents less obstruction to your view and enables quick transitions and seamless aiming.

Many red dots these days use a battery that is captured between the mounting surfaces on the body of the sight. To change the battery you must remove the sight and afterward you should re-zero the weapon. The RTS2 features a very convenient side-mounted battery tray, which eliminates the need for re-zeroing.

You can use the side buttons to select between the 10 different brightness levels. If you forget to switch off the sight after eight hours of inactivity it will turn off automatically. You can also simply hold one of the buttons for a few seconds and the sight will switch off. Once a button is touched again the sight will spring to life returning to the previous brightness setting.

Adjustments can be made in 1-MOA increments and then locked down via the locking screw. The RTS2 is available in either 3-MOA or 6-MOA dot size. For my build, I chose a 6-MOA dot.

I was able to mount the RTS2 directly to the top picatinny on the SB-X upper with the included mount. I did not require a riser like I anticipated, which kept the optic mounted nice and clean.

Once this new rifle was fully assembled, a wave of bliss washed over me. I could not believe how light and nimble it felt while handling. Everything about this build was aimed at making a lightweight rifle that was compact and quiet. This build checked all those boxes and then some. I tested the rifle by myself first to make sure it fed and functioned properly. All was good so I moved onto phase two of testing, the girlfriend. Remember, my girlfriend did not care for my regular AR-15, stating it was too heavy. She took hold of the new lightweight .22 LR and commented how much lighter it was. She shouldered the rifle and quickly made hits on target. Fatigue wasn’t an issue and it is just so nice not having to wear ear protection while shooting. This is a great plinking rifle for a fun day on the range. My Gemtech Alpine suppressor provided “Hollywood Quiet” suppression. Many times the only noises while firing, was the bolt moving back and forth and the thud of the projectile hitting the backstop.

Conclusion on How to Build Your Own Lightweight .22 AR

Introducing new shooters to firearms is always delicate. You have to choose your firearm properly to ease them into it and not create bad memories of the experience. I think this rifle is probably one of the most perfect introductory rifles. It is super light, quiet, and compact. The addition of the RTS2 sight makes hitting the target easy and intuitive. It has the side benefit of teaching proper operation and handling of the AR-15 platform so when a new shooter is ready to take on a larger rifle the muscle memory has been established. Go ahead and give one a try, you won’t be disappointed.

By Zack Carlson. Originally published in the May 2014 issue of GunUp the Magazine.