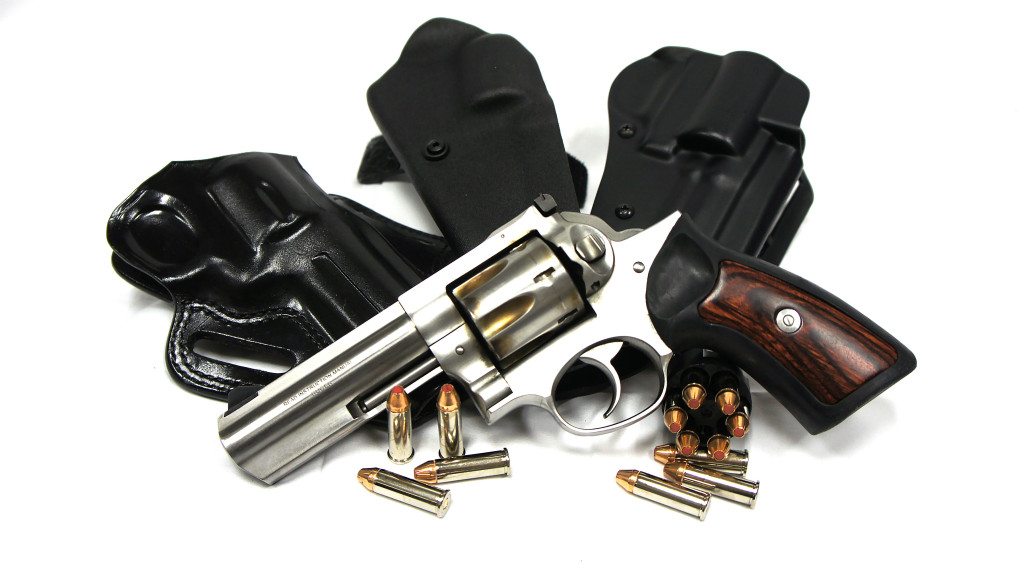 Shooting a revolver is a great way to learn better trigger control skills and generally improve your shooting. It’s also a lot of fun since revolvers are frequently very accurate and have minimal recoil. However, once you start deeper down the wheel-gun rabbit hole, there are a considerable number of important accessories you’re going to want, especially if you plan on using your round-gun for self-defense or competition.

Keeping your revolver fed is going to be very important. The low ammo capacity means that in competition you’re going to be reloading quite a bit. The speedloaders you choose can vary from competition-friendly to designed specifically for concealed carry. 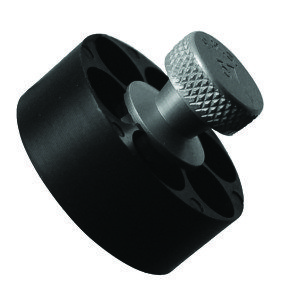 The HKS loader uses very simple technology to hold the rounds. Turn the loader face up and drop the rounds in, rim first. Then twist the silver locking knob to hold the rounds in place. To load the gun, insert the rounds into the cylinder, and while stabilizing the cylinder to keep it from spinning, twist the locking knob clockwise to release the rounds. The HKS loader is very secure, and will hold rounds under almost any conditions you can throw at it. The need to stabilize the cylinder does make it less than ideal for competition use, however a little bit of practice can make that not an issue at all.

Next up are the three different loaders from Safariland. The Comp-I, Comp-II, and Comp-III. Deciding which loader to use depends entirely on your goal. 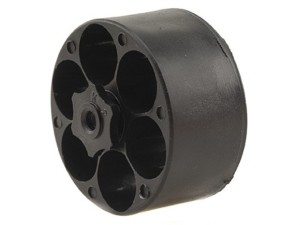 The Comp-III, which we’ll start with, is widely regarded as the gold standard of competition revolver speedloaders. It holds the cartridges securely during movement, but unlike other loaders uses a spring assist to drive the cartridges into the revolver’s chambers. The spring assist helps seat rounds if the chambers are a little dirty due to prolonged shooting. The major drawback to the Comp-III is that it’s only available for Smith & Wesson K and L frames and the Ruger GP100. If your revolver’s cylinders don’t fit those dimensions, you’re out of luck with the Comp-III. 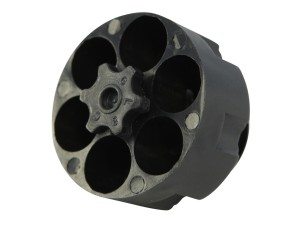 Moving down on the list to the Comp-II, this is Safariland’s “do-everything” loader. It’s smaller than the Comp-III, since it doesn’t have the spring assist mechanism. It’s very similar in overall size to the HKS loader, but instead of using a twist mechanism to release the cartridges, it releases by simply pressing the loader into the face of the cylinder. A star mechanism on the face of the loader contacts the star of the cylinder, and releases the rounds with an audible and satisfying click. Because it lacks the spring-loaded release of the Comp-III, it falls prey to the drawbacks of the HKS. However, unlike its smaller brother the Comp-I, the Comp-II is relatively easy to load. The locking knob on the back of the cylinder is quite large and easy to manipulate. Like the HKS, it is available for a wide range of guns. 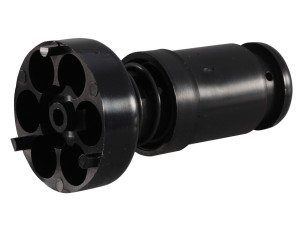 The smallest of the Safariland loaders is the Comp-I, which, like the HKS, is available for a large number of guns, but lacks the large and easily manipulated locking knob of its larger brother, the Comp-II. The Comp-I is, in form and function, a smaller version of the Comp-II that is designed with concealed carry in mind.

The next speedloader on the list is the JetLoader, which looks like a stocky Comp-III with its housing stripped away, leaving the spring mechanism bare. It functions exactly like a Comp-III, however some competition shooters prefer it to the Safariland model. In the hand and in operation, it feels sturdier and more positive than the Comp-III, but subjective qualities like that are hard to measure. The biggest advantage of the JetLoader over the Safariland is that it’s smaller, model for model. The Ruger GP100 model is smaller than the equivalent Safariland model for the same gun, and thus better suited for concealed carry. Additionally, the JetLoader is, at least theoretically, available for j-frame revolvers, such as the S&W 640 Pro Series. However, it does seem that the j-frame model is forever sold out at most online retailers. 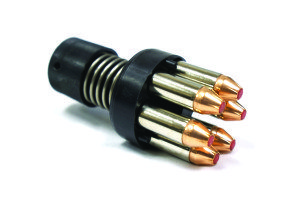 There are few other boutique loaders available on the market as well. The SL Variant is a rare loader that enjoys a niche following, and there are some specialty loaders available for big-bore revolvers. However, the HKS, Safariland, and JetLoader by far make up the majority of the loaders in common use. 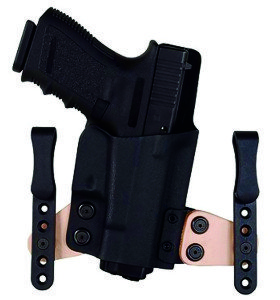 If you’re looking for a concealment holster for a j-frame or similarly sized revolver, you’re going to have nearly limitless options. All of the top-tier companies make a rig for your j-frame, whether your want kydex, injection molding, or leather, you name it and you’re going to find something. Appendix carry? No problem. Custom one-offs? Also not an issue.

For leather holsters bought off the shelf, we recommend Galco. Their fit and finish and commitment to quality is excellent, and they have and extensive line of holsters for revolver concealment. Their Summer Comfort holster is the gold standard for Inside the Waistband (IWB) strong side carry. They have several other options as well for IWB or outside the waistband carry. 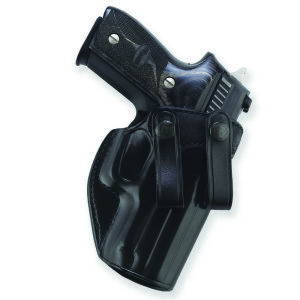 Also available for the j-frame and similar guns are pocket holsters that allow the lightweight revolvers to be slipped into a pants pocket. A pocket holster is a must for pocket carry, as it protects the trigger guard and prevents the possibility of a negligent discharge that could cause injury. Always remember when pocket carrying to keep that pocket free and clear of any items other than your gun. A great choice for pocket carry is the DeSantis Nemesis holster.

For kydex holsters, there are both in- and outside the waistband options available for small revolvers. It’s hard to pick a favorite between Blade-Tech or Comp-Tac’s offerings, because they’re both excellent. IWB carry with a kydex holster frequently requires a lot of personal preference in how the gun fits, so you’ll probably end up trying a few options before you settle on the best choice.

There are also plenty of holsters for big-bore guns, like the great Smith & Wesson N-frames such as Dirty Harry’s classic Model 29. There are even concealment holsters for these guns, but the majority of them are designed around backwoods or hunting carry. Again, Galco has excellent options here, and there are a host of custom leather makers such as Mernickle making great products for the big-bore double action guns.

The final revolver accessory we’re going to look at are the deepest rabbit hole possible: stocks, also called grips. The factory rubber grips that come on most revolvers today are terrible; fitted with finger grooves that don’t fit most shooters, and generally bad. That’s why there is such a huge market for aftermarket revolver grips, because everyone’s hands are just a little bit different.

For competition grips, a familiar name is king: the Miculek grip. Designed by Jerry Miculek, this grip allows the shooter to position their hand as high on the backstrap of the gun as possible for maximum recoil control. They’re available in smooth or checkered textures depending on the shooter’s preference.

There are also plenty of wood grips available for all models of revolvers from Hogue. Smooth, checkered, big butt, whatever grip you want for your competition gun, Hogue has it. You can even get a finger-grooved model, if you’re part of the 10-percent of the population that those grooves actually fit. 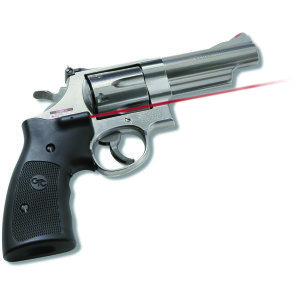 For your defensive revolver, there’s really only one choice: Crimson Trace LaserGrips. I could spend hours talking about why a laser makes sense on a defensive gun, why you should absolutely have a laser on your gun, but the bottom line is simple. LaserGrips work. They’re well made and carefully engineered to deliver performance. Having a laser grip on a j-frame or an LCR makes one of those little guns a lot easier to shoot well.

An interesting and old-school grip for defensive revolvers is the Barami Hip Grip. The Barami replaces the factory grips on a gun and ads a clip on the right side of the gun (for right handed shooters) that hooks over the belt or trousers providing a holster-free way to carry a gun. It’s really nothing more these days than an interesting historical artifact, but in its time it was quite ingenious.

Running revolvers in competition is a lot of fun, and despite their disadvantages to modern semi-auto pistols, revolvers still fill a lot of defensive holsters. There are a ton of great accessories out there for wheel-guns that we weren’t able to touch on, moonclips and all the sundry parts for those, sights, speedloader pouches, even optics for hunting guns. There are so many options to change and modify your revolver to fit your personal preference. Whatever way you chose, if you start with your list with quality gear, you’ll be getting off on the right foot. We like to say “buy the right gear once;” adding some of these accessories to your gun is a great start.

By Caleb Giddings. Originally published in the December 2013 issue of GunUp the Magazine.