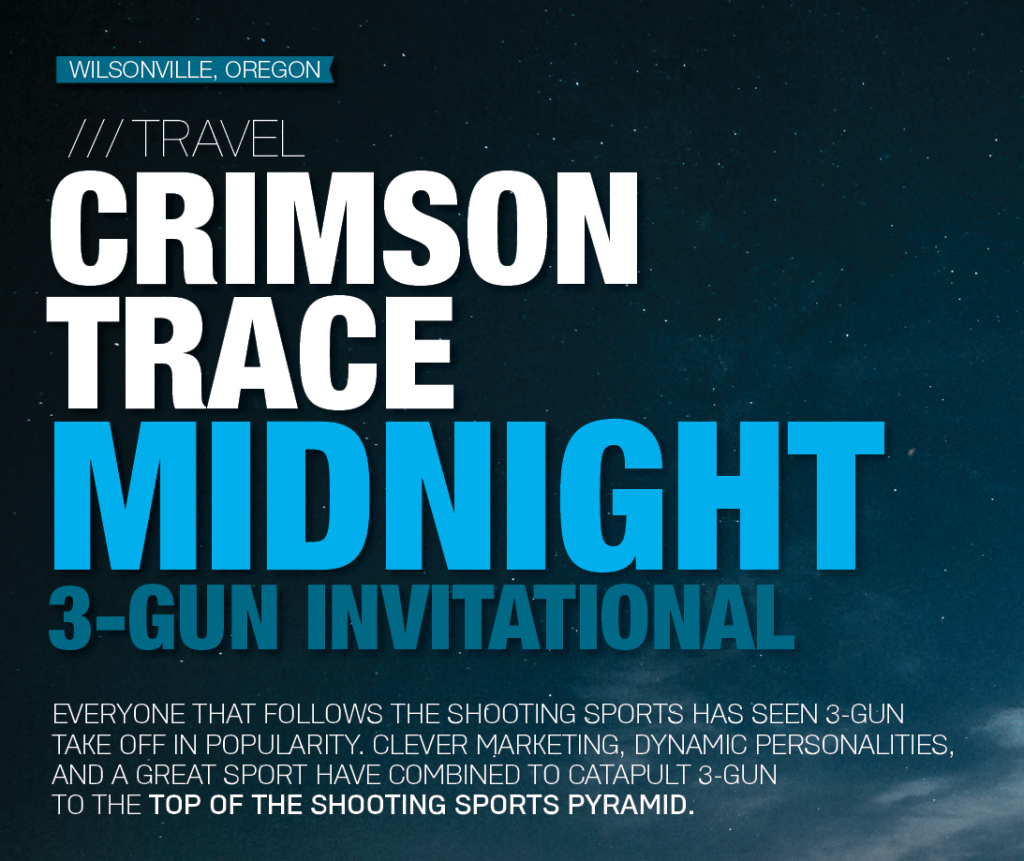 Crimson Trace, headquartered in Wilsonville, Ore. took a look at all of that and said, “That’s cool, what if we did it in the dark with lasers and lights?” That simple idea became the driving force behind the Crimson Trace Midnight 3-Gun Invitational, which is quite simply the coolest match ever. Where else in the course of the match will you get to do all of the following: shoot a grenade launcher at a car, shoot an M249, shoot a suppressed GLOCK with an IR laser while wearing night vision, and shoot a short barreled machine gun on full auto? Other matches might have one of those items, but only at Crimson Trace’s legendary 3-Gun match will you get to do all of that… And more.

The Midnight 3-Gun Invitational (M3GI) is an opportunity for top tier 3-Gun shooters to test their skills in the dark, and win a prize of up to $10,000. It’s also an excellent opportunity for match sponsors to showcase their wares, as was the case on several stages that used prop guns and gear. One stage started by shooting a full-auto FNH SCAR-16 at three targets, grounding the SCAR and transitioning to FNH’s single shot grenade launcher. The target for the launcher was a battered old Subaru down range, which when struck with the practice grenade gave off a satisfying “thud” and puff of orange smoke. 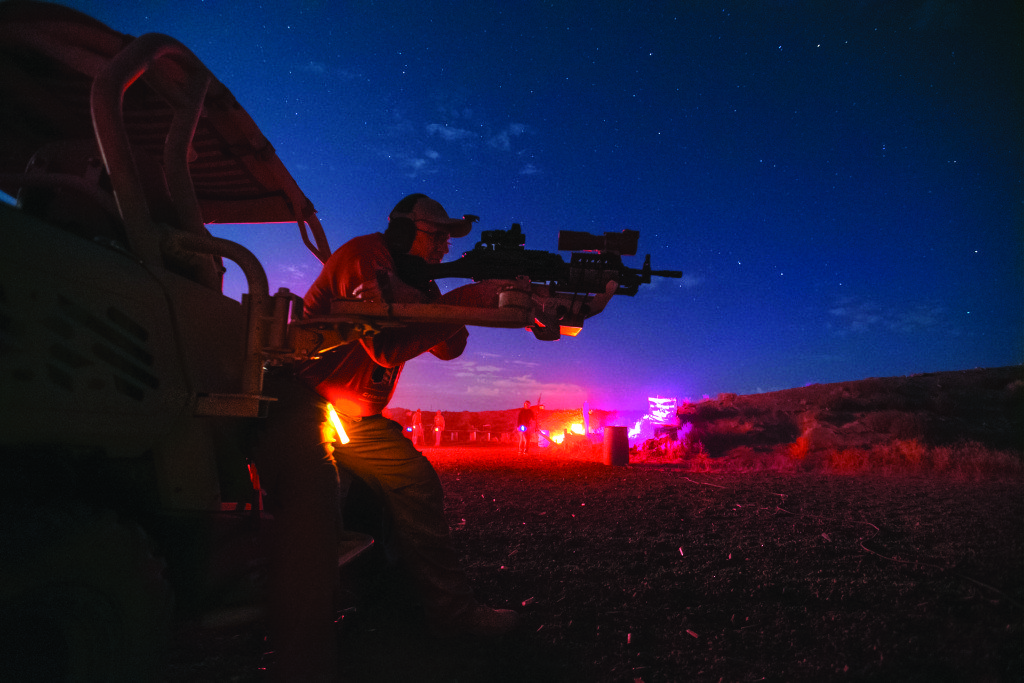 Gemtech and Primary Weapons Systems sponsored another stage that used prop guns and gear. This is the stage mentioned above where you start with a GLOCK 17 equipped with a Gemtech suppressor and a Crimson Trace IR laser. The reason you’re using an IR laser is because on the stage you’re also wearing a pair of night vision goggles giving you binocular night vision focus. For people not used to it, wearing night vision can actually be quite disorienting. We spend our entire life simply shifting our eyes to look at things, when wearing night vision you must remember to turn your entire head. For shooters who are trained to drive their eyes from target to target, that can be a bit of an adjustment. Also an interesting adjustment when wearing NVGs is the lack of depth perception on items close to your body. This made it difficult when the range officer handed you the Mk110; most shooters who reached for it just grabbed empty air. 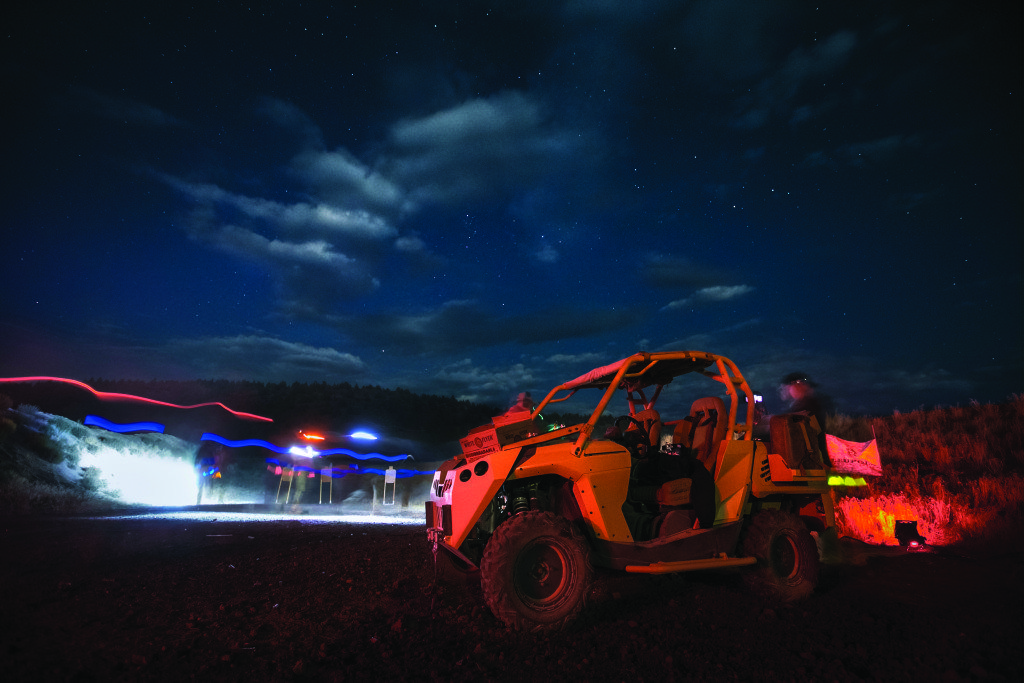 The stage itself was simple – engage three targets with the suppressed GLOCK 17, safely ground the pistol and then pick up the definitely not-suppressed PWS rifle. The PWS rifle featured a 7.75-inch barrel and was fully automatic. If shooters wanted to game the stage and get the best time possible, they’d set the gun to semi and simply serve each target with a helping of two rounds each. But where’s the fun in that? Put the selector to auto, and hold on to the Crimson Trace laser fore-grip. Thanks to the IR laser on the fore-grip it was possible to hip-shoot your way through the shoot-house stage. It was quite literally a blast, as the concussion from the gun was very loud in the enclosed space. But no one cared, because they just shot a machine gun in the dark while wearing NVGs.

It is important to emphasize that in addition to all the free machine guns and ammo, this is a serious 3-Gun championship. The top shooter gets a $10,000 prize, and the prize table itself is pretty impressive as well. Because it’s an invite only match, only the cream of the crop of 3-Gun shooters make it out, along with a large media contingent. At the 2013 M3GI the victor, for the second year in a row, was the Army Marksmanship Unit’s Daniel Horner. 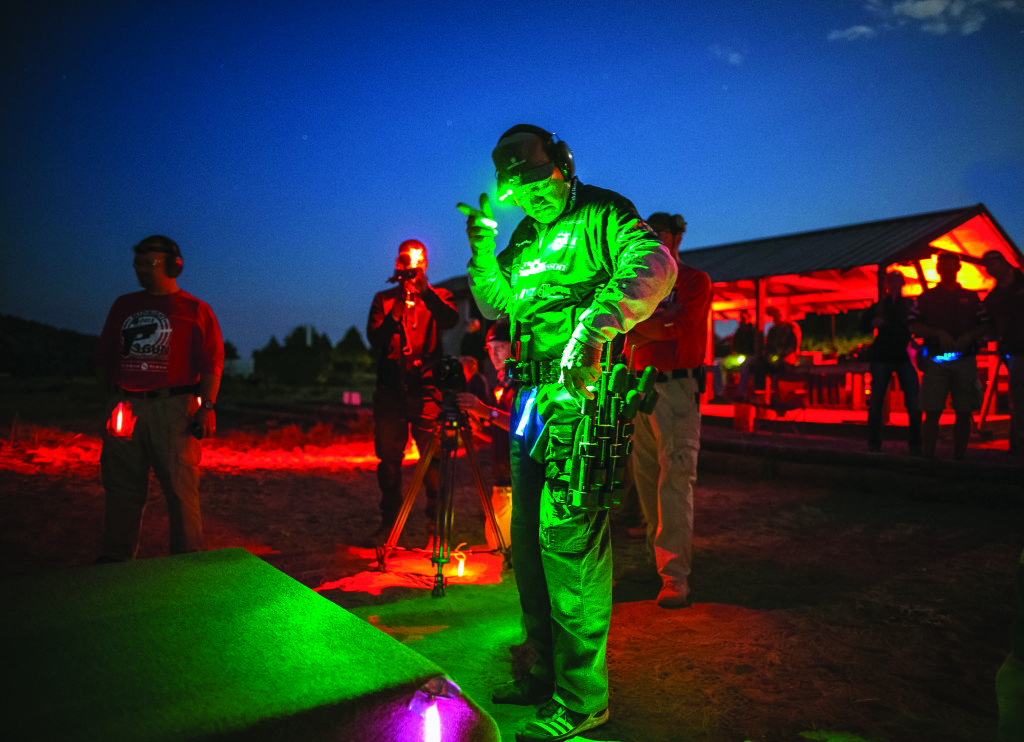 While the stages for the match look simple during the day, once the lights go out an “easy” stage can get complicated in a hurry. How lights react with the gun’s sights can be surprising. And identifying targets in the dark is an issue all its own.

M3GI is probably one of the most fun shooting matches of the year, combining so many firearms and accessories that most shooters never get a chance to toy with. The paint grenades, the glow sticks that adorn each shooter, the colorful lighting that highlights the sponsor banners all create an environment you can’t find anywhere else.

By Shelley Rae. Originally published in the November 2013 issue of GunUp the Magazine.