GiRSAN Regard MC 9mm Pistol imported by EAA Corp. This is a Beretta M9 Clone from Turkey that’s solid quality. Thanks to EAA Corp for sending the Regard MC for the Review and for Robbie from Wheaton Arms assisting us at Range Day.

A few years ago the US Military adopted the Beretta® 92. Now Girsan has perfected this design. Girsan Regard has been the preferred side arm of the Turkish Military and law enforcement for many years and is a NATO approved sidearm. The Regard is so good, that the Vice President of EAA uses this pistol as his everyday carry. Think about it, a guy that has many pistols to choose from carries the Girsan Regard. We do not have to say much more.

Let’s check out the Girsan Regard MC. First things first, this is strikingly close to being a Beretta clone as there are a lot of similarities and some differences.

Girsan has been in business since 1991 and is an ISO 9001 standard company, and they are a NATO approved company for their firearms they make a lot of firearms for the Turkish military and import all over the world. We’re going to take a look at the Girsan Regard MC and do a little comparison with the Beretta M9. I want to thank the European American Armory for sending the Regard MC for this review. This is followed after one of the most popular handguns in the world, the Beretta 92. This is the open barrel design. Most of the parts are interchangeable with the Beretta 92, except for the barrel and the locking block, but even the magazines are interchangeable. The Regard MC comes with an 18+1.

The one big departure from the Beretta 92 is the finger grooves molded into the grip, which makes it really nice and then we have serrations on the back. The Regard MC has three dot sights, the safety is ambidextrous, and it has a generous slide release. The beaver tail gives you a very nice ride. It does have a lanyard loop at the bottom. There is no bevel on the magazine well, but because the magazines are tapered, it’s very easy to insert and it’s a nice click in with a nice polymer baseplate.

I brought out my Beretta M9A3. This is actually a different model than the M9 or the Model 92. One of the big differences is it just has this straight grip. You can see the finger grooves versus the checkering, and this is enhanced checkering on the M9A3. Of course the threaded barrel is different, and you do get four Picatinny slots with the Regard where you get three with the Beretta M9. The trigger guards are a little different but this is more like the Beretta 92. All in all the Regard MC is definitely very close to the Beretta design. When it comes to grip interchangeability, I took the grip off and put a Beretta 92 grip on here – and it fit. It was a little bit tight at first and I just kind of pushed it down and was able to get in there. This just gives you a little bit more of an idea of the parts interchangeability.

We took the Regard MC down to the range and it shoots just like a Beretta 92 with the same reliability. We shot about 500 rounds through it with no issues whatsoever. With the open slot design you typically don’t get any stovepipes or anything, but it just ran like a top. It is a larger firearm, like the Beretta 92, and it does fill your hand. The grooves on the front strap are a little different but do give you a little more of a gripping surface, especially with no type of serrations on the front, those finger grooves do help.

If you really liked the Beretta 92, you’re going to really like the Regard MC.

The Girsan Regard MC’s price range is anywhere from $300 up to $400, while the Beretta runs around the $525 to $550 range. These are all market prices which could be higher or lower in your area.

Big thanks to Fiocchi USA for their Sponsorship! 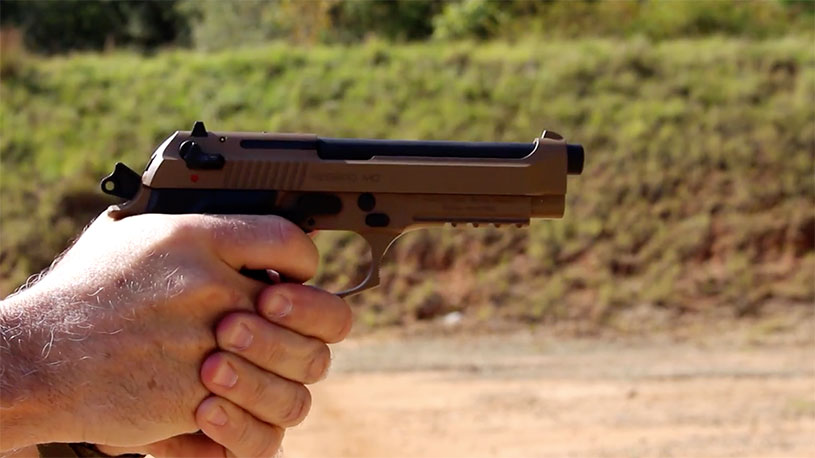 Henry Repeating Arms is known for its quality Lever Action Rifles, but the Long Ranger Express takes it to a whole other level. When the Henry Long Ranger was released in 2016, we set a new bar in lever action precision. Combining bolt action accuracy with the speed of a lever gun, the Long Ranger’s...

Robbie Wheaton and Sootch take an in-depth look at the new RIA 5.0 from Armscor/Rock Island Armory. This is very innovative and something we’ve never seen! The RIA 5.0 is revolutionary in the world of sport shooting. The thing that really sets it apart from its competitors is Armscor’s patented RVS recoil system which maximizes...