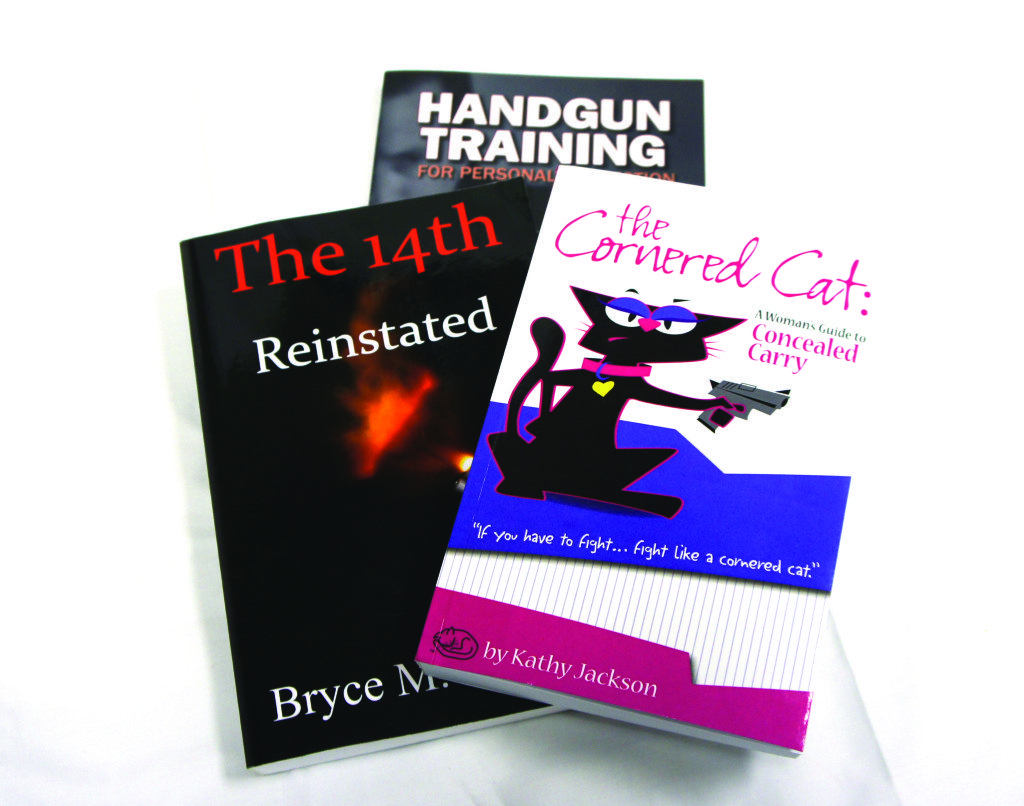 Whether you’re looking for an inexpensive gift or to do some reading of your own as the winter weather closes in, a good book is a good thing to have. In the past, we’ve recommended reading to improve your competition shooting, but there are a lot of other options out there. Here are some of our favorites across the board.

The Cornered Cat: A Woman’s Guide to Concealed Carry By Kathy Jackson

You don’t have to be a woman, or the kind of guy who read 50 Shades of Gray without hiding the cover, to appreciate the down-to-Earth information in Kathy Jackson’s concealed carry guide. This book covers almost every aspect of concealed carry, from the embarrassing questions, to the legalities, to picking out your first firearm.

Kathy Jackson is an experienced firearms trainer who currently teaches at the Firearms Academy of Seattle. She has taken nearly every class FAS offers and has since studied under instructors such as Jim Cirillo, Ken Hackathorn, Tom Givens and Massad Ayoob. She has spent well over 500 hours in different training classes around the country. Follow Kathy’s blog at corneredcat.com Buy The Cornered Cat: A Woman’s Guide to Concealed Carry for $19.95 at Amazon.com

Handgun Training for Personal Protection: How to Choose & Use the Best Sights, Lights, Lasers & Ammunition By Richard A. Mann

Richard Mann’s book on Handgun Training for Personal Protection is an extremely in-depth look at the use of handguns for personal protection. With information on mindset, accessories and training the book provides information for a wide variety of shooters, whether you are a new shooter interested in learning about self defense for the first time or long-time shooter who is interested in learning more about the mindset of defensive handgun use, there is valuable advice to be found in this comprehensive guide.

Large pictures and detailed narrative help readers decide the best ways to set up a handgun to protect themselves. The book provides information to help those who plan to keep a handgun for personal protection decide whether or not they should have a laser, what kind of sights they want to use, and how to choose ammunition. There are also valuable tips on training and evaluating your skills.

Richard Mann is a former police officer and was a serviceman with the U.S. Army. Today, he is one of the most well respected authors on the subject of firearms. He works as a contributing editor for several publications, including Shooting Illustrated, Varmint Hunter, Combat Handgunner, and the NRA’s American Rifleman. He is also the editor for Gun Digest’s Cartridges of the World 13th Edition. Follow Richard’s blog at ramworks.net Buy Handgun Training for Personal Protection for $21.99 at Amazon.com

The 14th Reinstated By Bryce Towsley

The 14th Reinstated is a unique ficition piece by firearms industry writer Bryce Towsley that we can only hope doesn’t serve as a peek into our future. Set a few years after a total social and economic collapse, the book follows a protagonist who is trying to rebuild a life with his family and neighbors when he is sucked into an evil plot.

The things the protagonist learns as he discovers how to survive in this horrific world serve as lessons for those who worry that society as we know it may be headed for a similar collapse. The beauty of the book, aside from the shocking plot twists, world-wide scope and adrenaline-pumping action, is the reality of the gun handling and other firearm-oriented details. Because of Bryce’s experience in the industry, the “gun stuff” is correct down to the last detail. His experience also appears in his attention to natural habitats, which are drawn with a true hunter’s eye; Bryce’s writing makes the reader feel like they are there, experiencing the surroundings every step of the way.

Bryce Towsley is a highly respected writer in international hunting and firearms circles with his byline appearing on hundreds of magazine articles and multiple books. Bryce published his first article in 1980 and has since covered a wide diversity of subjects, but none as thoroughly as hunting and the firearms used for the sport. Currently, he is a field editor for NRA’s American Rifleman and Shooting Illustrated, and is also a columnist for Gun Digest Magazine. Read more from Bryce or purchase an autographed copy of The 14th Reinstated for $14.99 at brycetowsley.com

Originally published in the December 2013 issue of GunUp the Magazine