The M&P line of pistols has been a tremendous success for Smith & Wesson. Used by law enforcement agencies and civilians in huge numbers, the M&P pistols show no signs of decreasing in popularity any time soon. That’s especially true for the most popular M&P for concealed carry: the M&P Shield. There is even a .22 LR in the M&P lineup, the M&P22. This is a 1:1 scale .22 LR version of the full size M&P which is manufactured under license by Umarex in Arnsberg, Germany.

Now there’s a new M&P, and it’s bringing you the best of both worlds. It combines the form factor of the mega-popular Shield with the caliber of the .22. The result is Smith & Wesson’s new M&P22 Compact pistol. The name is nearly a perfect description of the gun – it’s an M&P, it’s a .22 LR, and it’s compact. How compact is it? Well it’s about the same size as the M&P Shield, meaning that shooters looking for low recoil training alternative for their Shield have a great choice.

The new M&P22 Compact is unlike the fullsize .22 in one way – it’s made in America, by Smith & Wesson at their Springfield, Mass. facility. It has a 10-round magazine, a thumb safety, and three-dot adjustable sights. The trigger feels exactly the same as an M&P trigger. The gun was put to the test in two days of shooting in the Wyoming desert, where it may not have been shot for groups, but it was certainly run hard. 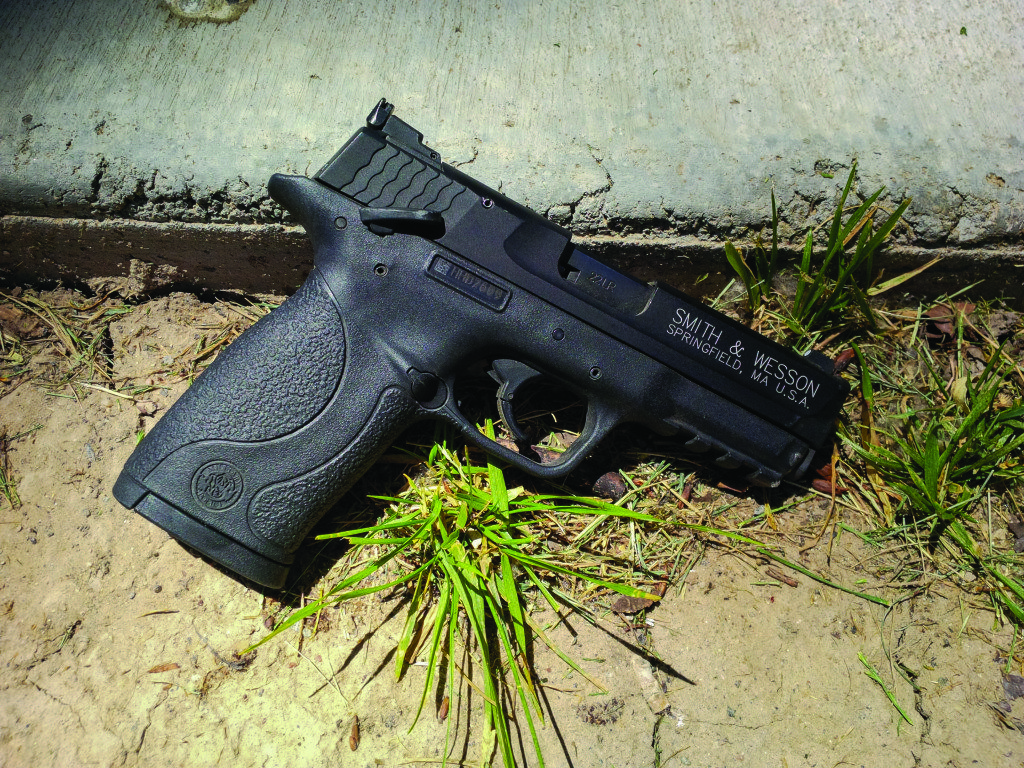 What We Like
The first thing that immediately springs to mind is the form factor. It’s a handy little .22, and it really does feel like a .22 Shield. The Shield is one of the best carrying single stack 9mms on the market, and so it follows that a .22 LR about the same size, with the same sort of feel would be a natural choice for a kit gun or a backpacking pistol. It’s also just a great little plinking gun. The size is just right.

For a gun that wasn’t shot for groups, it certainly proved to be plenty accurate. If you recall last month’s issue, driving around Wyoming shooting prairie dogs, this was the handgun that the majority of the writers kept by their side during that trip. It was easily capable of head shots on prairie dogs at 15 to 20 yards, and in a particularly memorable incident was used to bring down an enormous running jackrabbit with a single shot to the spine. One might say that the rabbit was…spinal tapped.

The sights are honestly not that bad – most factory pistol sights aren’t great, but at least the M&P22’s sights are adjustable, so they can be set up for your favorite .22 LR load. They’re the usual three-dot sights that seem to come on every factory gun. Two white dots in the back, one white dot in the front. They are perfectly acceptable and workable.

Also on the gun has a manual thumb safety; normally this isn’t a feature that’s recommended for an M&P used for defensive purposes, but on a .22 trainer it makes sense. This is a fun gun, and it’s a gun that’s going to spend a lot of time in the hands of younger or less experienced shooters. In those situations, having a manual safety can add a layer of safety, as well as provide valuable teaching moments.

The last thing that really makes the gun enjoyable is how fun it is to shoot. It’s hard to explain the fun factor of a compact .22, but it’s really there. The gun goes “poppoppoppoppoppoppoppoppoppop” and then suddenly you’re out of ammo with a big smile on your face. You don’t know why you’re smiling like that, but you are.

What We Don’t like
Honestly, the worst thing about this gun isn’t an issue with the gun…it’s the ammo. The fact of the market is that many stores are still struggling to keep their ammo supply up. We searched the popular site GunBot.Net for ammo prices on .22 LR, and the best we were able to find was 11 cents per round. That means a box of 100 .22 rounds would set you back $11.00 plus shipping and tax. While things are getting better, and no one is charging 20 cents a round for .22 anymore, it’s still frustrating if you go to a big box store like Cabela’s and can’t find any blasting ammo. It’s worth noting that GunBot also shows 9mm as cheap as 19 cents a round, meaning that your per round savings between 9mm and .22 are only eight cents.

There really isn’t anything wrong with the little gun; it’s accurate and reliable, it’s easy to shoot well, and it’s just a nice little piece to have around. Sure, there are things that could be different, but that’s a matter of personal taste. For example: why does it have a rail on it? That doesn’t make sense, because no one is going to be operating operationally with this little guy. It’s a full rail as well, so you could mount a Surefire X300 on the thing…if you really wanted to. The gun would look better, sleeker if it had no rail, or even the vestigial railnubbins on the Shield.

The other thing that would be cool on the M&P22 Compact would be a threaded barrel. Why? Because suppressors, that’s why. It’d be neat to put one of the various micro-22 cans on the market right on the front of this gun. Sure, your suppressor would cost more than the gun, but who cares? It’d be awesome. Actually, that gives me an idea, because then you could use the rail to mount a Crimson Trace Rail Master Pro light/laser on the rail under the can, and you’d have a pretty sweet pest eliminator right there. Raccoons in your garbage? Not anymore. Check your local laws about discharging firearms.

The Verdict
What’s not to like? Everyone loves a good .22, and this new M&P22 Compact is really the Shield of .22s. It’s great as a training tool if you carry a Shield, it’d be a wonderful little gun for backpacking in places that don’t have dangerous animals, a nice new shooter tool, or even a tactical pest elimination device.

The M&P22 Compact is accurate. It’s reliable. It’s fun to shoot. Sure it has a rail for no reason, but who cares? It does what a .22 is supposed to do, and that’s “make shooting fun.” If shooting isn’t any fun, what’s the point of all of this? That’s why .22s are great, and that’s why this little gun is great. You shoot it, you smile, you feel better about yourself. It’s nice to take a break from all the serious gun training for serious shooters that we do. Whether you’re on the range training for your next big match, or dry firing the hours away, or practicing life and death defensive skills for when you see the elephant as the balloon goes up; sometimes you just want to pull some triggers and have a good time.

By Caleb Giddings. Originally published in the Septemeber 2014 issue of GunUp the Magazine.