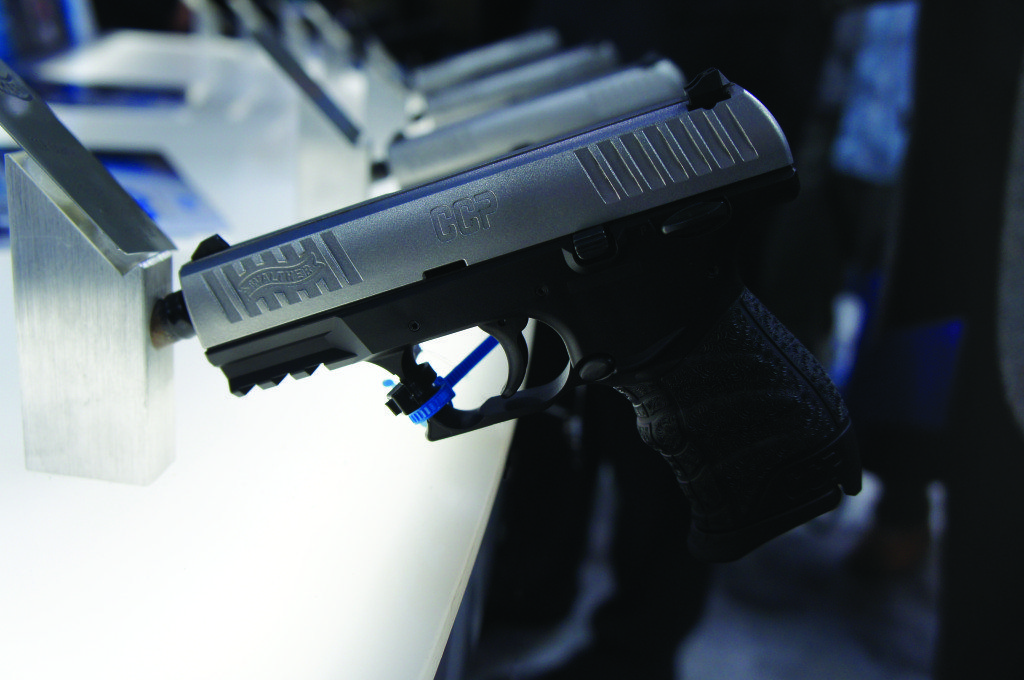 Carry guns are the kings of the industry right now. The black rifle explosion has finally mellowed out, and those with longer memories will recall that prior to 2008, carry guns had been driving the gun market. They still are, with more and more people getting carry permits each year. One category that has been hugely popular is the single stack polymer 9mm, with entries from Smith & Wesson, Springfield Armory, Walther, Kahr, Beretta, Sig, and others. At NRA Annual Meetings 2014 Walther doubled down on the compact carry 9mm pistols, adding the new CCP to their lineup.

Walther has been offering the excellent PPS for some time now; some wondered why they would add a second slim 9mm pistol to their lineup. The simple answer, of course, is “to sell” – but there are more interesting features on the new Walther Concealed Carry Pistol that make it attractive. To address the first and all-important answer of “to sell,” it’s worth noting that the CCP is priced to be affordable, and will likely retail for around 400 dollars.

However, the CCP stands alone on its features as a concealed carry piece. Our first look at the CCP was with a prototype while visiting Walther’s facilities in Germany. There we had the chance to shoot the CCP and get a feel for how it would perform when it eventually hits the U.S. retail market.

What we like
We’re shooters here at GunUp the Magazine, and we like features on guns that are thought out for shooters. That’s why one of the things that isn’t really marketed about the CCP that we really like are the sights. Serious shooters almost always change the sights on their pistols, and the CCP’s sights have the same dovetail cuts as the PPQ. That means you can purchase aftermarket defensive sights for a PPQ and mount them on your CCP.

Walther is strongly promoting the pistol’s “Soft Coil” technology, which is their term for its delayed blowback operating system. Because the gun uses a delayed blowback gas system, much like the HK P7, the recoil spring on the CCP is much lighter than you’d see in other comparatively sized defensive pistols. That makes it much easier to manipulate for shooters that might otherwise struggle with the slide on similar pistols. 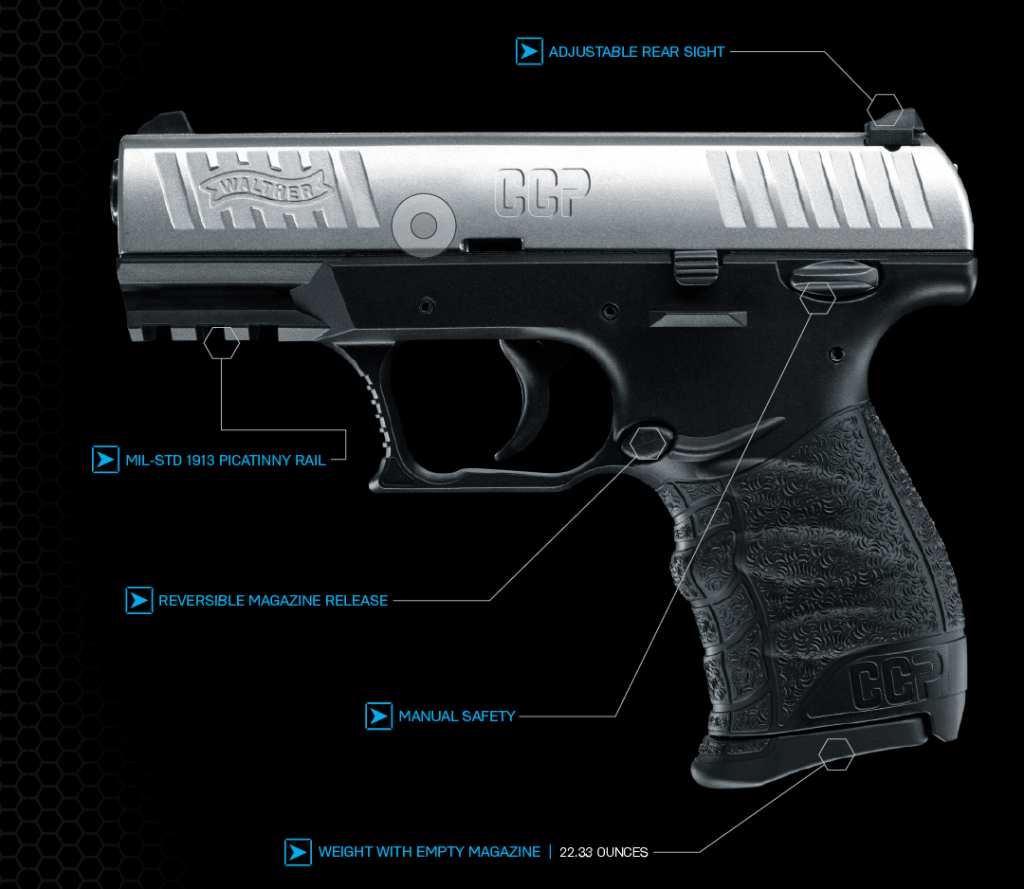 The controls on the CCP are well thought out and easy to use. The grip is ergonomic, and has a reasonable amount of texturing to allow for a better grip. For whatever reason (likely to get ATF import points) the gun features a thumb safety, which is manipulated in the usual manner of “up for on, down for loud noises.”

Of course, most important is how the gun shoots. For lack of a better point of comparison, it shoots like a polymer HK P7 with a better trigger. The trigger pull feels similar to other polymer framed striker fired guns, and will be a simple transition for anyone who shoots a Glock or M&P. If you’ve never shot an HK P7, you’ll find the recoil of the P7 to quite easy to manage – the slide snaps back and snaps forward, and you’re ready for your next shot. The muzzle stays remarkably flat because of the delayed blowback gas system.

What we don’t like
Speed reloads may have been far from the designer’s mind when they made this gun, because the magwell is tiny. It’s understandable because when people think “single stack 9mm defensive gun” they don’t usually think, “speed reloads.” Still, it would be nice for the gun to be set up a little bit better for reloads than it is.

While we praised the sights for being interchangeable with other PPQ sights, the reason that’s a good thing is because the sights themselves aren’t really that great. Again, we’ll just blame the ATF for this one and chalk it up to “import points.” Still, it would be better if a defensive firearm came from the factory with actual defensive sights on it.

Our time with the CCP was limited, but we liked what we saw. The initial impression of the gun is an accurate, soft shooting, easy carrying 9mm pistol. The market keeps asking for more of these, as Smith & Wesson and Springfield sell all the compact 9mms they can turn out. Walther bringing in a gun at an attractive price point with good features could seriously shake things up.

The real question will be whether or not the CCP can compete with the two current kings of the slim 9 market: the M&P Shield and the Springfield XDs. We have a Shield in the office, and it’s the most frequently carried gun we own, because it’s light, accurate, and easy to shoot. The Walther CCP is all of those things as well; but it lacks the production capacity and marketing juggernaut that the Shield has behind it.

Walther does have a dedicated following in the U.S., and the reception to the little gun at NRA Annual Meetings was quite positive. It stacks up nicely in all the right places: decent trigger, easy to manipulate, comfortable to shoot, technologically interesting, and all at a reasonable price point. Could someone have finally made the Shield-killer?

The only way to find out is to wait and see. For 400 bucks though, it’d be worth buying simply because it’s an interesting gun. It’s not every day you get a delayed blowback, polymer framed single-stack 9mm. That by itself should have some appeal to the gun nerds. The Walther brand name will attract a few others, but ultimately, the casual CCW will determine the fate of the CCP. For our part, we hope it catches on. Walther has quite the little gun here.

Originally published in the June 2014 issue of GunUp the Magazine.