Frequent accidents at THIS deer crossing require these bizarre signs

Drivers, watch out! Some people in Ford County Illinois are saying the deer are like magnets to their cars. According to a local sheriff’s office, one deer per week was hit by a vehicle in 2015. Hopefully, the four suicidal deer signs they installed will save some front bumpers and deer lives. Unfortunately, one sign has already been stolen.

According to The News Gazette, Button Township Highway Commissioner, Ron Hilligoss, said, “You tell 30 million people about it, someone’s going to steal it.” Lets be honest, the signs are probably hanging in someone’s man cave.

Do you think these signs will work? 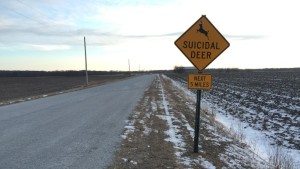 8 Hunts You Can Actually Afford!

Chronic Wasting Disease and the Use of Hunting Scents