In a surreal turn of events, a 73-year-old Australian fisherman came face-to-face with a 440-pound great white shark at the bottom of his boat.

Terry Selwood was fishing offshore at Evans Head on the New South Wales north coast when the shark leapt into his boat and tore skin off his arm.

“I caught a blur of something coming over the boat … and the pectoral fin of the shark hit me on the forearm and knocked me down on the ground to my hands and knees,” Selwood said, according to MSN. 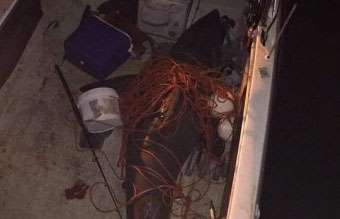 In a brief showdown with the shark, Selwood said he was on all fours looking into the eyes of the shark while the shark returned the favor until it started thrashing itself around.

The brave fisherman lost a good amount of blood from his injured arm and still managed to reach for his radio to call the local marine rescue volunteers at Evans Head.

After the incident, Selwood returned home to nurse his swollen arm and the shark has since been lifted out of his boat with a forklift and taken away for an autopsy.

As to why this happened, Selwood can’t seem to put a fin on it. He said he had been fishing for almost 60 years and never been through anything like this before.

Love hunting but don’t have a lot of money to spend? Check out these budget-friendly adventure options. North America offers some of the best hunting in the world, but many of those experiences come with a high price tag. Every year it seems guided hunts become more and more expensive, and some hunting is limited […]

With a very successful range of fishing gloves, Fish Monkey is now hoping to repeat that success with Hunt Monkey – a new line designed specifically for hunters and outdoorsmen alike. Featuring the same high-tech components, cutting-edge manufacturing techniques and an extremely rigorous process of research and development, Hunt Monkey’s 2021 line will consist of […]

Crazy Russian Hacker has made it easier to combine fishing and organizing with these eight brilliant fishing life hacks. If you fish a lot, as we do, some of these things really come in handy; like the unsinkable glasses or a fishing hook organizer. Face palm that we didn’t think of organizing our fishing hooks […]

Corey Martello, 37, from Jericho and Hunter Bessette, 24, from Northfield have been charged with taking deer by illegal means, taking deer in closed season, spotting and locating wildlife, shooting from a motor vehicle, cocked crossbow in a motor vehicle, failure to stop for a Game Warden, careless and negligent operation, and attempting to elude […]