The VP9 was introduced by HK in 2014. HK went through a 90,000 round test on the VP9 and the gun was still working great showing just how durable and tough they are. VP stands for Volkspistole in 9mm. This is the third striker fired pistol by HK. The first one was the VP40 and the second was the VP70. In 2017 HK introduced the VP9sk which has the paddle mag release. However, in 2020, they introduced the VP9sk B Model which has the push button mag release.

As far as quality goes, the VP9 from HK has been a huge hit and of course HK already has a strong reputation for durability and accuracy.

The VP9sk B  has a ten round magazine with a finger extension. The magazine fits right into the little notch on the grip. The gun also comes with a thirteen round mag with a spacer if you wanted to change out your normal magazine.

The big thing about the VP9sk B Model is the push button mag release. It is located on the frame and can be hit without having to adjust your grip. Because you don’t have to change your grip, some may think that you would inadvertently hit the mag release. However, we have found that this is not the case.

One of the things about the VP9 is that there are some unique features about it. One of those things is the cocking ears on the back. They allow you to grip that slide much easier and give you a little bit more leverage on those ears. They are not very intrusive meaning they are pretty flat to the frame and don’t stick out that much.

On the bottom of the VP9sk is an accessory rail allowing for the addition of a light or laser.  The trigger guard is a square trigger guard which gives you ample room to fire with gloves on.

The grip is one of the main things that separates it from some of your other striker fired pistols. It’s so ergonomic and when you put your hand in it, it just molds into your hand. The grip has a small finger groove at the front to keep your hand comfortable and stable. The laser etching is in a squiggly line pattern and gives you good traction when firing. There are three different options for the backstrap: small, medium, and large. On the sides, you can also swap out the side straps. These part swaps allow you to better fit the pistol grip to your hand depending on your hand size. 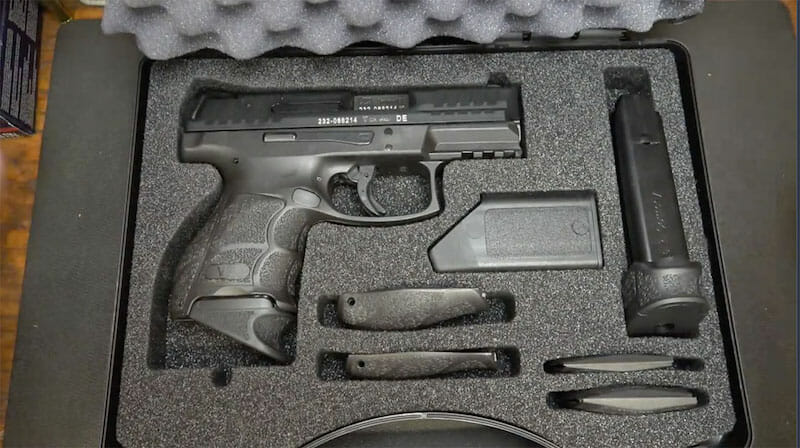 The steel sights are luminescent and give you some night capability. HK does create tritium sights that are interchangeable with the steel ones. The red dot on the back of the firearm is a cock striker indicator which tells you when the striker is cocked and ready to fire.

The slide lock is abbreviated and on both sides of the VP9sk. In front of it is the takedown lever which allows the slide to go back into place.

The barrel is hammer forged and according to HK is cannon grade steel. It is 3.39 inches in length.

The slide has a matte finish to it and is what HK calls their hostile environment finish. The finish is impregnated into the metal and will keep ware and corrosion down.

For this test, we are going to be using Fiocchi ammunition and a maglula loader to load the VP9sk more efficiently.

The HK VP9 is the most ergonomic pistol on the market in Sootch00’s opinion. The grip of the Glock comes nowhere near the grip of the VP9.

The price on the VP9 is around $550 and up. This is due to the world renowned quality of HK.

Thanks to HK for sending the Model B for this test and evaluation.

If you have a firearm for self defense, becoming a member of the USCCA is a great idea. Knowing that you have legal protection in the case that you have to draw a firearm can give you peace of mind.

Big thanks to Fiocchi USA for their Sponsorship! 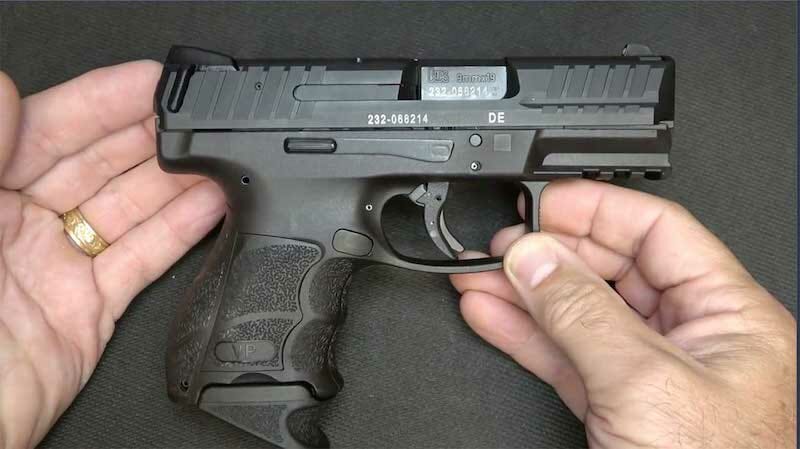 When it comes to the Colt 1911, it’s the original. Ever since 1911, Colt has been making really high quality 1911s, serving all the way through all the major wars that we’ve seen over the past century plus for 110 years. It’s just one of those firearms that has a lot of mystique about it, […]

Beretta started producing the Model 950 in 1952 and this was a very popular little pocket pistol. During the time, it was a very small self defense option. Of course, now we have a number of 380s that are pretty much the same size. But during that time, this was a great gun just to […]

There are a lot of AR-15s on the market, and honestly most of them have some quality parts, sometimes they have upgrades that can really bring the price up or you can get them very reasonable. Today we’re going to take a look though at something very unique. I’ve reviewed one of these before with […]

Taurus introduced their GX4 9mm back in May of 2021. And now they’ve introduced their GX4 Toro model, which is optics ready. Honestly, I’ve not always been a big Taurus fan, but man over the past few years, Taurus has really put out some fine quality firearms. One of the things about the GX4 is […]