The United States Carbine Association (USCA) is a new association, their first match was held on St. Patrick’s Day, 2013. The fact that they were able to host their inaugural National Championships in their first year is in and of itself impressive. Then, you add in the match itself, and then the location, and it’s a winning combination unlike any other.

The GunUp the Magazine staff goes to a lot of matches each year, our frequent flier miles and hotel points can attest to that. Usually these matches are in cool places, but it’s not usually somewhere that I would want to go on vacation. New Smyrna Beach, Florida was different. I would go back in a heartbeat just to spend a weekend walking on the pristine beach, eating delicious food and drinking at the local townie bars, and it would be a weekend in heaven.

I’m going to be honest, say it right up front, and get it out the way: I experienced my first disqualification at this match. I was on Stage 7, the starting position was in a box, handgun loaded and holstered, rifle loaded and ready to roll. On the start signal, shooters engaged several targets out at 100 yards, before taking a long sprint up to some closer targets, engaging those with rifle, dumping a rifle in the bucket, and sprinting over to some pistol targets that had to be engaged off a balance beam. I didn’t even make it to the cool part. As I began to sprint out of the initial box, I heard a “thunk,” my waist felt lighter, and I stopped immediately. My handgun had flown out of my holster and was lying on the ground. One “unload and show clear” and an important lesson in holster retention later, I was done for the day.

This was disappointing primarily because the stages were all that cool. There was a shoothouse, 300-yard targets that had to be engaged off of a roof, a ladder to climb, sprints, tunnels to crawl through – this was an active match, and I loved it. There was no way to go through this course of fire and not have a good time. Shooters were constantly laughing at each other and joking around, and generally having a good time in the ways that shooters do. 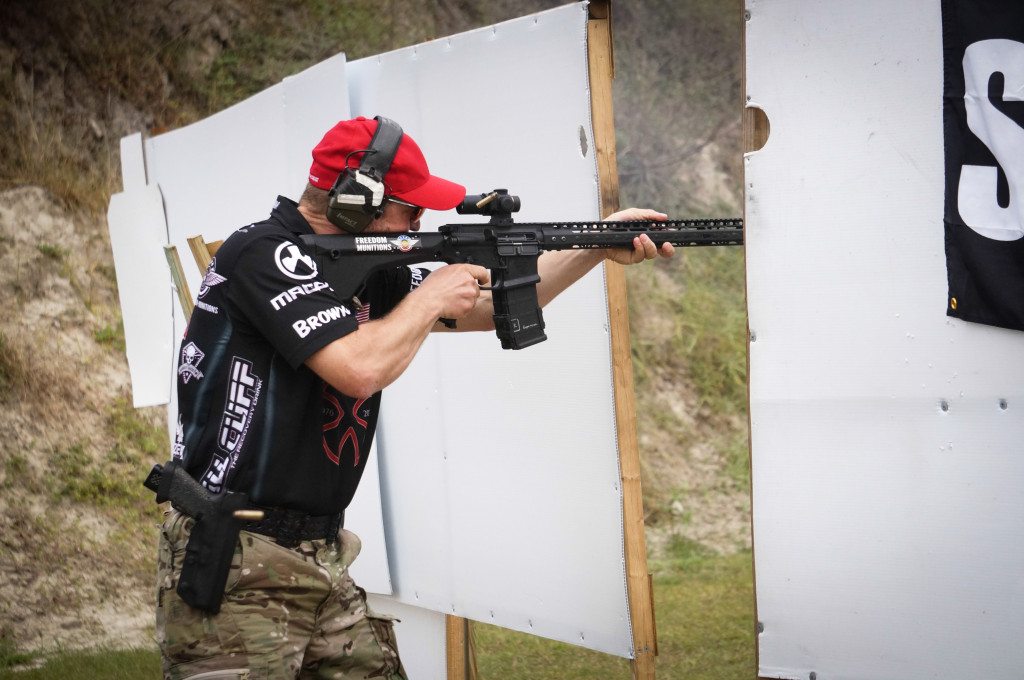 The unique challenges presented by the match really helped clarify the ways in which USCA Nationals is different from 3-Gun. Many have referred to a lot of 3-Gun matches as a “reloading race,” and there is much less of that when shotgun reloads are taken entirely out of the equation. Yes, this match was incredibly physical, but you couldn’t get by just on being able to run fast. You had to be able to get hits, quickly, with your rifle out at 300 yards while leaning awkwardly on a roof.

Overall, the stage design was impressive, the competition was difficult and the match was just plain fun. It’s true that not everyone wants to shoot from a balance beam or scale a ladder with a slung rifle, but for those that do finding a match that has these types of events is a rare occurrence. USCA is also much more easily accessible for those who don’t have the time or resources (or desire) to perfect shotgun reloading techniques. It’s a true “run and gun” match that challenges skill and encourages athleticism.

On top of this the competition was fierce, with some of the top 3-gunners from around the nation showing up to compete. Shooters from Team FNH, Team Benelli, Team Noveske and a variety of other big name sponsors showed up to fight for the top pick at the prize table.

New Smyrna Beach, Florida is a beautiful town located in between Cocoa Beach and Daytona. It has small town charms combined with a beautiful sandy beach. It’s one of the top cities on Earth for both surfing and shark attacks, which the townies will proudly tell you if you drop in for a nightcap at any of the local bars.

The Hampton Inn is located conveniently right off the main strip, just a few blocks from the beach. Which means after the match is over it’s easy to wander down the street from the hotel, pick up a hot dog, and take a walk on the beach to enjoy the warm Floridian air

It’s not that most of the other places that matches are held are bad, but there is something unique about New Smyrna Beach in November that makes you grateful to be there. With a variety of restaurants, bars and a beautiful view it would be worth a trip by itself, without the national championship attached.

As a huge supporter of both safety and the Second Amendment, Volusia County Gun & Hunt Club is a 100% NRA member affiliated club and encourages all members to become NRA affiliated Range Safety Officers. This creates a safe and fun shooting environment and educates all members about safety on the range.

Originally published in the February 2014 issue of GunUp the Magazine.