Learn and Practice Martial Arts to Prepare for a Survival Situation

Martial arts systems require physical strength, endurance, flexibility, adaptability, and mental discipline – all attributes of a true survivor. Unfortunately, these attributes are often neglected by the average survivalist. The popular assumption is that if you have sizable food storage and can shoot straight, you are good to go. But in reality, the first and most important weapon in any survivalist’s arsenal is his own body. If a person’s body is left to decay, no amount of gear is going to save them in the middle of a crisis situation.

Hand-to-hand combat training is sometimes treated with cynicism among 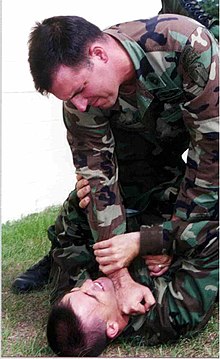 survivalists who have spent all their lives consumed in the world of firearms. The likely response is “Why use my hands when I have a gun…?” Indeed. Why should we? Perhaps because a dangerous situation may arise where we do not have a weapon in our possession. Sometimes, you have to improvise and the only tools you can always count on are your hands and your brain. Martial arts training hones and refines these assets to perfection, and also teaches the mind to deal with the stresses and fears associated with combat. 95% of success in martial arts revolves around learning to accept the idea of someone trying to kill you, so that you can move past the terror of the scenario and deal with it calmly and logically.

The following list of martial arts forms are intuitive, generally easy to learn and quick to utilize.

Eskrima / Kali: Originating in the Philippines, Eskrima and Kali focus on stick and knife training. Some of the deadliest blade wielding martial artists on Earth are known to practice these styles. The idea of learning these martial arts forms is not only to attack with edged weapons, but also to defend against them. Knowing how armed assailants, trained and untrained, will move to harm you gives you a distinct edge. Understanding the motion of a knife strike allows the defender to create or close distance effectively. In addition, timing arm and wrist locks is important to reduce cuts and control the knife hand before serious damage is done.

Hapkido: Hapkido should be at the top of every survivalist’s list of fighting methods. This form focuses on joint locks, joint breaks, using centrifugal force, pressure points, eye gouges, throat attacks, etc. Generally, it is very difficult for someone to grapple with you if you break their fingers, wrists, hyper-extend their knee caps, or crush their wind pipe. One twisted wrist could put an assailant completely out of commission. Knowing how to counter grappling using grappling is fine, but knowing how to utterly disable a grappler is better in a survival situation.

Jeet Kune Do: Created by Bruce Lee, Jeet Kune Do’s philosophy is to adopt what works, and set the rest aside. It is essentially a combination of the short range tactics of Wing Chun combined with the long range tactics of Japanese and Korean styles. Jeet Kune Do’s goal is to be a truly complete martial art, and so far, it has proven itself in this regard. The offensive and defensive capabilities of Jeet Kune Do are astounding, and perfect for the survivalist delving into the world of hand-to-hand. If you can only practice one style of self-defense, this should be it.

Jiu Jitsu: Japanese in origin, Jiu Jitsu is a grappling martial art and is an incredibly effective style for ground situations. That said, Jiu Jitsu is actually a very limite

d fighting style, especially when you’re not in a cage and you are confronted with more than one attacker. Survivalists should learn grappling techniques so that they know how to defend against take-downs and return to their feet. In a real combat situation, you NEVER try to go to the ground on purpose. Successful fighters will always combine Jiu Jitsu with other art forms in order to round out their abilities.

Ninjitsu: This familiar form of martial art is from Japan, and its portrayal has become so cartoon-like that people rarely believe it is an actual martial art. In fact, it is, and a very deadly one. The brilliance of ninjitsu really dwells in its “think outside the box” mentality. Ninja’s in feudal Japan were assassins, but they were also the guerrilla fighters of their age. The combat methods of ninjitsu revolve around surprise and misdirection, which are factors that always work in the survivalist’s favor.

Shotokan Karate: Shotokan is a Japanese martial art using movements derived from defense methods common in Okinawa and streamlined for easier application. At first glance, Shotokan seems stiff and impractical, but this is not the case. Shotokan training is extremely intense, and the sparring matches can be brutal. Deep stances and sharp strikes train the body to hold ground even against a larger opponent making Shotokan a perfect foundation art for beginners in self-defense. As the student advances, the stiffness disappears, and their strikes become coldly logical and precise.

Taekwondo: A Korean style, Taekwondo focuses on kicks to the extreme. Like Jiu Jitsu, it is a style limited to a very particular range of attacks and scenarios. Taekwondo has the fastest, and in many cases the most devastating, kicks in the world. The use of kicks depends on the mastery of the fighter. If one is fast and precise, then their strikes will make opponents feel like they’ve just been hit by a truck. A well-placed kick can crush ribs, crack skulls, and knock an opponent out cold.

Related Stories: True survivalist shows you how to make ancient bow and arrow

Thai Kickboxing: Thai is world famous for its fast, devastating, steamroller-type strikes and the ability of its practitioners to take a hit and keep on going. For a crisis situation, it is imperative that the survivalist be capable of absorbing and moving past the pain of a fight, as it is always a matter of life and death. There is no such thing as a hand-to-hand fighter who can avoid every attack and come out unscathed. Plan on getting hit. With the heavy arm to leg blocks of Thai Kickboxing that act as a kind of self-made brick wall, along with devastating leg sweeps and knee breaks, this art form is perfect for the dangerous possibilities of collapse.

Western Boxing: It’s not an Eastern martial art, but Western boxing teaches incredible punching power. Eastern martial arts focus on speed in order to inflict damage, but the bottom line is that Western boxers hit harder because they assert more body weight behind their punches. It is more important to learn speed and timing before learning to hit hard. The most powerful punches in the world are useless if all they do is sweep the air. Thus, Western boxing is an incomplete fighting system, but a fantastic addition to the survival martial artist’s repertoire.

Sootch00 Survival: How To Form A Prepper Group

Sootch00 Survival: How To Make Pants Into A Survival Backpack