GetZone | antlers | Man Slams Into 20+ Point Buck With Car, But While Seeking Help Another Man Tags the Buck
Outlaw Featured

Man Slams Into 20+ Point Buck With Car, But While Seeking Help Another Man Tags the Buck

If you hit a deer with your car, does that automatically make you the owner of the dead deer?

Not necessarily. Here’s a story from the Star Tribune that sparked a debate and feud as to who is the rightful owner of road-kill.

A 20+point monstrous buck got struck and killed by a 2002 Chevy Astro on Thanksgiving night by Schuck, a 61 year old hunter driving home to Shell Lake, Wis.

“The buck turned his head and looked at me as I hit him, right in the middle of the road,” Schuck said. “He totaled my van. But I never took my foot off the foot-feed. I kept going until I came to a driveway a couple miles up the road, and pulled in for help.” 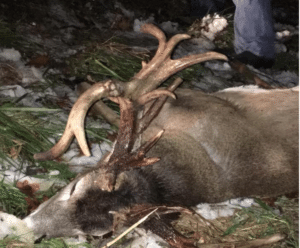 “…The deer was roadkill,” he said. “I was more worried about my van. I also didn’t have a cellphone. That’s why I pulled into the driveway.” The people who’s driveway Schuck had just pulled in had just finished their Thanksgiving meal. But their relaxed state was over once Schuck described the incident and mentioned the deer he hit had ‘tall antlers’. 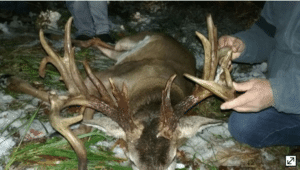 Many locals stopped at the scene of the accident to view the dead big buck with its wildly asymmetrical antlers. One man in the crowd that had gathered said the buck had 26 measurable points, maybe 27. A Minnesota man that’s hunted in the area before had also stopped at the accident scene and assumed the monstrous buck had been abandoned. So while Schuck was seeking help from the Capra’s family for the heavy damage to his car, the Minnesota man claimed the buck by registering it by phone as roadkill with the Wisconsin Department of Natural Resources.

Tempers rose and police were called in to settle the dispute.

But the Police’s Conclusion is that you can’t register a deer twice. The deputy pointed to the Minnesota man and said, ‘This man has already registered it. It’s his.’ ”

To read the full story visit the StarTribute.

What do YOU think? Who should get the body of this monstrous 20+point buck?

If you hit a deer with your car, does that automatically make you the owner of the dead deer? Not necessarily. Here’s a story from the Star Tribune that sparked a debate and feud as to who is the rightful owner of road-kill. A 20+point monstrous buck got struck and killed by a 2002 Chevy Astro...

Clyde Roberts of Virginia just took a beautiful 8 point buck. While the buck may not break any records anytime soon, Clyde may soon be the oldest active hunter in the country. At 103-years-old, Clyde hasn’t missed a step and is happy to spend yet another season in the woods pursuing his great passion. His...

Time seems to slow down in those final seconds before a bow hunter lets loose, but as soon as that arrow leaves the string time speeds up with a vengeance. Any decent hunter will try to observe his shot placement and where his quarry ran to make tracking easier. If the arrow passed cleanly through...

It doesn’t matter what else is going on in the world, the excitement of opening day of whitetail deer season is upon us. Whether you are looking for that first buck as a new hunter, the meat doe to fill the freezer, the first buck that comes along, or you are big or empty chasing...