Millions of First-Time Gun Buyers During The Pandemic

January 2020 started out with a strong SHOT Show®, followed by buzz surrounding background check figures on firearms with NSSF-adjusted NICS data showing year-over-year increases of 19 percent in January and 17 percent in February.

Mid-March brought the pandemic to the forefront of the news, and breaking firearm sales throughout this time were a lead story. Thanks in large part to the work done by NSSF’s legislative team, the firearms industry was deemed essential in most states, and firearm retailers were allowed to stay open to conduct business. During these times, NSSF-adjusted NICS figures showing year-over-year increases of 80% in March and 69% in April 2020. These strong increases led to more than 6.5 million NSSF-adjusted background checks in the first four months of 2020, up 48% from 4.4 million during the same period in 2019.

Retailers also reported an increased number of first-time gun buyers, estimating that 40% of their sales were to this group. This is an increase of 67% over the annual average of 24-percent first-time gun buyers that retailers have reported in the past. Semiautomatic handguns were the primary firearm being purchased by first-time buyers, outpacing the second-most purchased firearm, shotguns, by a 2 to 1 margin. Modern sporting rifles, revolvers and traditional rifles rounded out the top five types of firearms purchased by first-time gun buyers.NSSF has been the go-to source for information on the firearm industry, providing insights on topics such as women gun owners, first-time gun buyers and shooting sports participation for more than a decade. In May 2020, NSSF surveyed firearm retailers to learn more about what they were seeing pertaining to sales during the first four months of 2020.

Retailers noted that these new customers were spending $595 on an average sale and that 40% of first-time gun buyers in the first four months of 2020 were female. The main purchase driver among the group was personal protection, followed by target shooting and hunting. Around 25% of first-time buyers had already taken some form of firearms safety course and 63% inquired about taking a firearms safety course in the near future.

All this equates to more than 2.5 million new gun owners in a very short period of time. Past NSSF research has shown that in order to keep these new owners active and avoid them becoming lapsed participants, they will need information on topics such as how to safely own, operate and secure their new purchase. Additionally, these new gun owners will need an invitation to go to the range or to the field to learn about firearm safety, personal protection and the recreational side of gun ownership, so be sure to add a +ONESM and invite some of these first-time gun owners with you as the nice weather returns and social distancing requirements are relaxed.

For additional insights on the firearm industry, visit www.nssf.org/research. 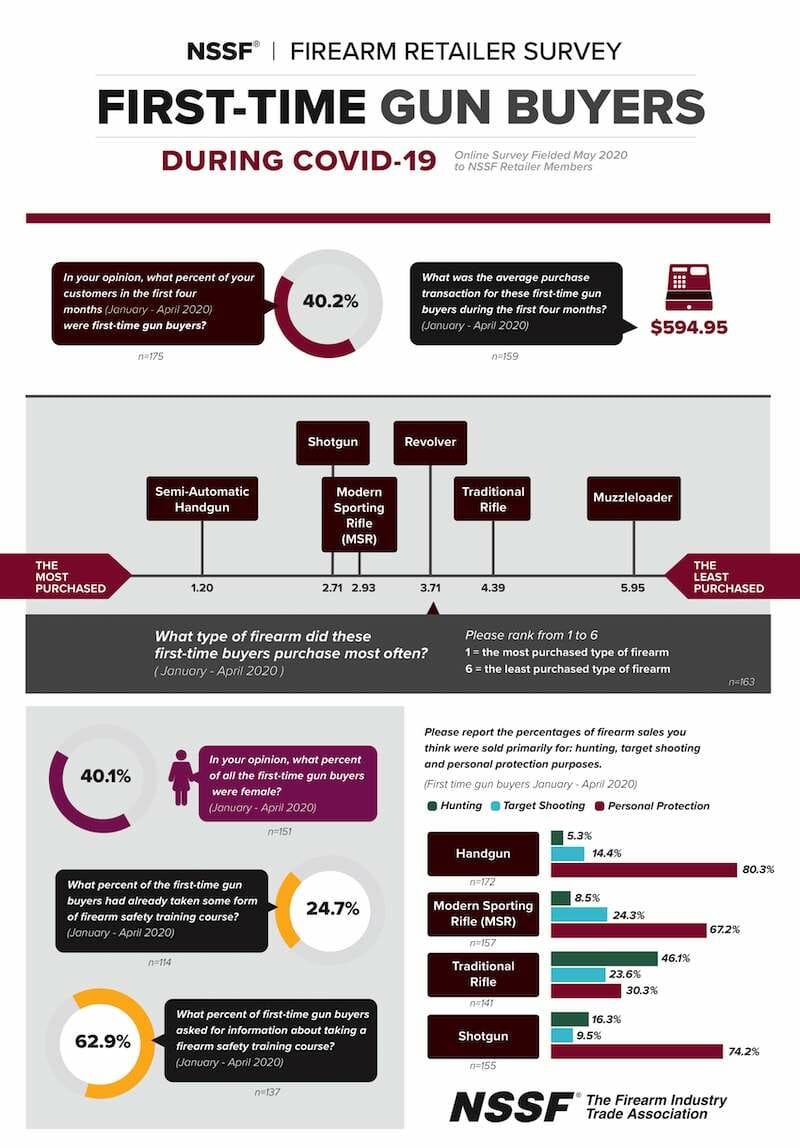