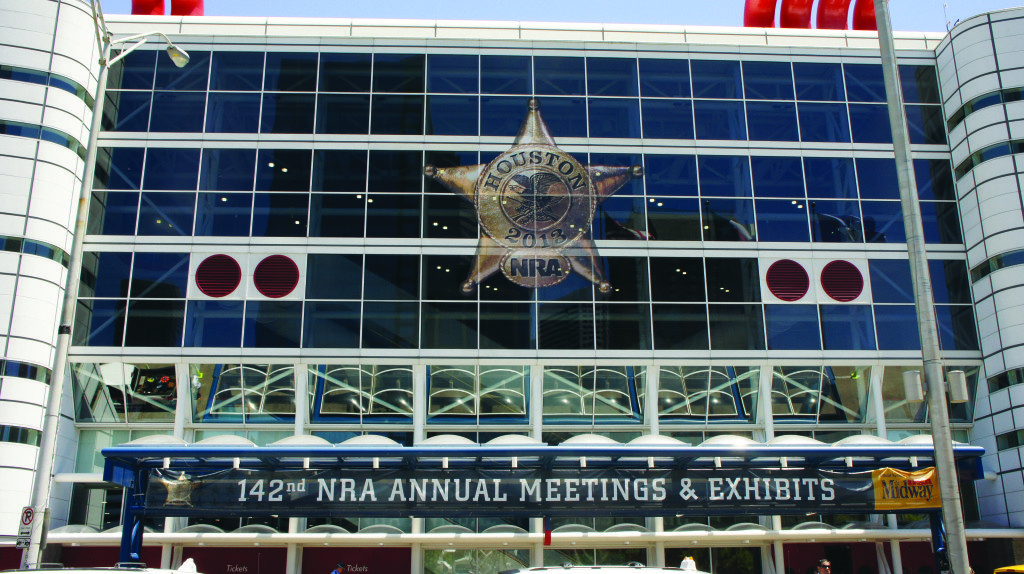 The NRA Annual Meetings, held in April at the Houston Convention Center in downtown Houston, Texas, were divided up into three floors, each a unique experience. The first floor held the manufacturer booths, the second floor held contests, book signings and a Starbucks and the third floor was full of meeting rooms and offices. The first floor, the show floor, is the life of the party and something to behold.

The first steps on the NRA show floor can be intimidating for someone who has never been to a show like this. The security at the NRA Annual Meetings was noticeably more present than at many other shows, including the National Shooting Sports Foundation’s (NSSF) Shooting, Hunting and Outdoor Trade Show (SHOT Show), a large industry-only event held every January in Las Vegas, Nev. While the security at the Annual Meetings wasn’t intimidating, it was essential to have badges on all the time when on the floor. The few protestors that did show up, had to set up across the street and were monitored closely by Houston PD.

The very first thing apparent upon entering the floor at the NRA Annual Meetings was the large registration desk, which was constantly busy up until Sunday afternoon. Beyond the desk were rows and rows of different colored booths decorated with firearms, TVs and giant company logos.

Lone Wolf Distributors had set up a trailer in the middle of the show floor. Stairs served as an escort up to a display of handguns customized with their parts and accessories. The top of this trailer was one of the first stops of the week for the GunUp crew, and the view was something to behold. Over 7 acres of guns and gear spread across the convention center floor!

The Sig Sauer booth became a popular location when team captain, Max Michele, got up on stage to do demonstrations or share shooting tips. (We could all use some shooting tips from Max.) Max wasn’t the only one, Todd Jarrett was up on stage at the BLACKHAWK! Booth giving a similar demonstration, while Team FNH was demonstrating ways to reload a shotgun in between country singer Mark Willis’ performances. There was almost always an industry celebrity, be it a pro-shooter, a top hunter or a radio or TV host, signing autographs or doing demonstrations somewhere around the show floor.

There were a lot of other mainstream celebrities wondering the floor besides country star Mark Willis. Sarah Palin was spotted on the floor after her speech on the opening day, and MMA Fighter Matt Hughes was a constant addition to the crowd. Reality TV stars from the Swamp People and American Guns could also be found on the floor, or signing autographs at different booths.

Of course, if live action isn’t your cup of tea, there were plenty of booths playing videos. Some were showing their competition shooters, or others, some had informative videos playing and AAC had an awesome video from DART that was basically just suppressed machine gun shooting and therefore really awesome. You could easily spend the entire weekend just watching videos and demonstrations.

But who would want to when there was so much else to see?

The major manufacturers pull out all the stops for the NRA Annual Meetings. It’s the one time they get to interface with consumers on a personal level and show off what exactly they can do in the process of building their booth. XS Sights, for example, had a “dark room” that customers could enter to see how their sights performed in a low-light setting.

Walking through the big booths is almost overwhelming, there are a lot of bright colors and a lot of bright lights and it can be a lot to take in. This isn’t true for the entire floor, though. As you proceed toward the back of the floor the booths get smaller. Here is where treasures can be found.

Visiting the lesser-known companies at the back at a show is a must-stop for any NRA attendees. There are a wide variety of products to be found that NRA is the best place to hear about. From jewelry and handbags to holsters and ammunition, it’s surprising what’s to be found. There are also a lot of collectors associations hidden back here with interesting and impressive guns on display that are fun to browse and informative to learn about.

There were a few food options on the show floor as well. It was a toss-up between talking yourself into an over-priced hotdog from one of the show floor vendors and having to leave the floor but having the opportunity to dine anywhere in downtown Houston. For many people, the Starbucks on the second floor served as a primary food stop.

The first floor of the NRA Show is where it all happens, it’s the life of the party and where everyone wants to be. The booths, the guns, they’re all there for attendees to ogle and enjoy, and while it’s impossible to see it all, it’s a lot of fun to try.

Originally published in the June 2013 issue of GunUp the Magazine.