GetZone » 2nd Amendment » Other Than Carry 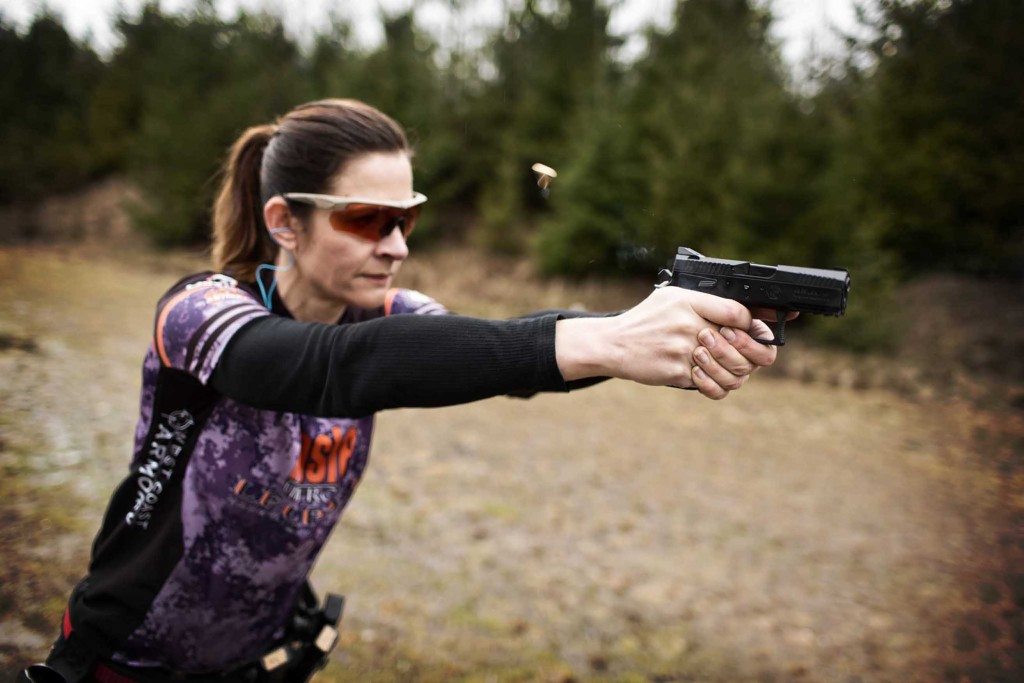 Over the last few years my lifestyle has completely changed. Guns are my lifestyle now. There is no turning back. I went from being a city girl who had never fired a gun to being a competitor, concealed pistol carrier and, worse yet, a gun blogger. I have brought many firearms in to my life for competition and for self-defense. I have rifles and pistols and shotguns, oh my! I have several options of carry pistols. My daily routine now is to carry concealed most every day.

I realized something recently when someone asked me about my current lifestyle. She asked if I had any other accessories other than guns that were also a daily part of my life. I had never thought of it until now, but yes, I do. I have my pocketknives, pepper spray and a flashlight. In fact, these items are so much a part of my daily routine I often forget about them. I have had to give up many containers of pepper spray to TSA and Custom’s agents. It is easy to forget when it is attached to my key chain. Thankfully I have remembered to pack my knives in my checked luggage, as to not have those confiscated. My flashlight is just a basic purse size, but it is handy to have at night.

As much as I try to carry my pistol with me very day it is just not always possible. When I travel by plane or to states that I don’t have a permit with reciprocity for, or if I run to the Post Office, I cannot carry. If I am being lazy and just need to run to the corner store or do a small errand, I might not carry. However, I do always have these other accessories with me. Do I think these items will be as effective in self-defense as a gun? Most likely I not, and I especially have no desire to get in a knife fight.

To me these items are all deterrents at the least and options in dire straits. I, personally, feel more confident if I at least have one of these items with me. I carry them with me even when I am concealing a pistol. I am hoping to get away from a bad situation early on so there is no need to draw my gun. No one wants to have to use a weapon, but I believe whatever your choice of an “other” form of self-defense is, it’s all about peace of mind.

There was a time when the thought of having a knife on me at all times was bizarre and foreign. It was not until I started working at a gun range that I joined the culture. It is a natural progression to take on characteristics of your working environment. Everyone on the staff had a pocketknife. I noticed it was more for utilitarian purposes than defensive. I found I was always looking for scissors to cut open boxes or to cut rope or string. I also noticed that the local training group Insights Training Center offered a Defense Folding Knife Class, which made me more curious to own one.

I asked my husband for a knife for Christmas but I still was not sure what I was going to do with it. That same holiday one of the range’s best customers came in with a box full of gifts for the staff. Back then there were only a handful of employees. He gave each of us a Spyderco knife. Talk about generous! My husband then also surprised me for Christmas with my Kershaw folding knife. The only thing to do at that point was to start wearing one.

I started with my Kershaw since it was smaller. At first, I had to remind myself to hook my knife in my pocket as I left the house. I would forget I was wearing the knife and would still ask someone for theirs before they harassed me. Finally, I was used to having it. I used it for everything. Soon I felt naked if I did not have it with me. I even personalized my Kershaw by attaching black Swarovski crystals to the outside. Don’t hate, I am a girl, I can do that. The knife is still just as sharp with or without crystals on it.

My Spyderco knife is bigger and bulkier, so I wear that if I am doing outdoor stuff or competing. That thing would gut a deer it is so sharp. This gets put in to my car bug out bag (BOB) for road trips.

Awhile back, my mom gave all the kids a car emergency tool. It is a knife but it is also a tool to break the car window and slice the seatbelt webbing. I keep this in my center console. Handy when you live in a city surrounded by water everywhere. The most interesting knife I have is a huge AK bayonet in my BOB kit that a friend brought back from Iraq. Not the average choice but it is great to have on hand, and it has a story behind it, which makes it more fun to keep.

I am happy to say that I have never had to endure pepper spray in the face. Not that I would make a point to voluntarily. I just know many people that have had to do it in their training in law enforcement or military. Many experienced pepper spray recipients have told me that they would rather be tazed than sprayed again. I will take their word for it. That being said, I believe this little spray canister do a decent job getting you away from a bad situation. It hopefully gives you enough wiggle room to stall the bad guy so you can run away. My problem with carrying the spray is that I forget about it on my key chain and I have had several confiscated from TSA and once going through the border in to Canada.

The pepper spray containers come in many sizes. I choose the small canister that allows me to attach it to my key chain and therefore I have it with me always. Like carrying a gun however, if you are not prepared to use it, it is worthless. My intent is to be at the ready as I walk to my car in the dark parking garage. I hold the spray can with the safety off, my thumb on the “trigger” and a firm grasp of the canister. Any time you are alone in places you should be as aware as possible of your surroundings and offensive in maneuvering your way to your car.

I think it is important to buy two of the same pepper spray cans at first. One is to test and one is to keep. The one thing I have found about these spray containers is that the spray does not go exactly where you think you are aiming it. From the demonstrations I have witnessed, the spray shoots low. Like you practice shooting your pistol to know your sight picture and point of impact, the same should be with the pepper spray.

Find an outdoor space and where there is little or no wind. I put up a bullseye target at my eye level. If you are shorter, then put the bullseye a little taller than you; assume your attacker is bigger than you. Aim your pepper spray at the face of your target and shoot. Drain the entire container! You are supposed to empty the canisters completely when you spray them. Don’t think you can do a short burst test and then put the safety back on and you are good; spray the whole can until it is empty. This test is to see where the stream of spray actually hits. You may realize that you will need to aim higher on your subject. Believe me, this exercise will give you a better peace of mind knowing where the spray will hit. Make sure you pay attention to the expiration date and replace your pepper spray yearly. Even if you have never sprayed it you should replace it.

By Annette Wachter. Originally published in the April 2014 issue of GunUp the Magazine.