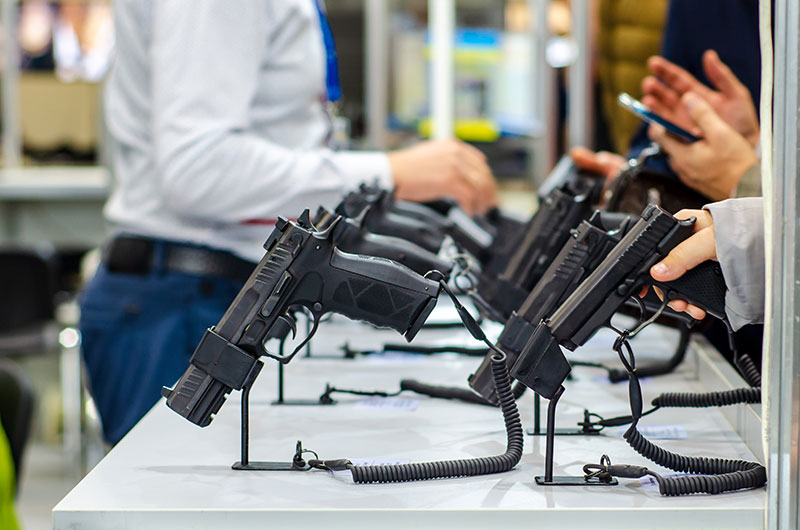 Across the United States, long lines greet customers prepping for the pandemic at gun shops and sporting goods stores. Even in staunchly anti-gun utopias like Southern California, stores are packed with people that have descended like locusts, devouring everything in their wake. It’s a scene that plays itself out every time there’s some sort of panic. I saw it during the Los Angeles riots in 1992 when everyone that knew I was a gun guy was calling me at work begging for guns to protect their families, again after the big Earthquake in 1994, and then again during the Obama era.

By this time, you’d think that most long-time gun owners would be smart enough to lay in an emergency stockpile of not only ammunition, but also an adequate number of firearms for anyone in the home that might need them. Maybe even some spare parts for their commonly used firearms, like recoil spring assemblies for handguns and bolts for their AR style rifles. Unfortunately, that doesn’t seem to be the case, and many of the people waiting in line are gun owners that should know better and be better. It wasn’t that long ago that I witnessed two elderly (70 +) men get into a fistfight at a Walmart over .22 Long Rifle ammunition, and those times seem to be headed our way again.

It’s easy to criticize these folks, and even though I poke a little fun at their expense, I get it. I really do understand that sense of panic at “what if.” It’s especially tough for people who may not think like most gun owners and are forced to come to grips with the reality that the world is not as safe as they thought. Market shelves bare, no milk for their children, no paper for their… Well, you get it. The reality is that while services and goods may be temporarily affected, we’re the United States of America, not some god forsaken Communist sh*thole. This is temporary and it’s being caused by panicked consumers, not a genuine shortage of goods. Supply of consumables is already catching up and the jackasses that overbought toilet paper are going to be maneuvering through their TP filled hovels kicking themselves for spending 500 bucks on 5 years-worth of TP.

With ammunition and firearms, it’s a little different; the supply takes longer to manufacture and the manufacturers are optimized to generate their product at a certain rate based on historical consumption. No one wants to be left sitting on a warehouse full of ammunition or AR15s when the bottom drops out of the market. These are the types of events that can seriously negatively impact firearms and ammunition companies, so don’t contribute to the problem. The odds of a total collapse of the infrastructure are minuscule, so planning on that is a fool’s errand. Make realistic plans as far as what you’ll need if things go bad for a month or so. Are you going to need that 3k of bulk 9mm? well, if you shoot a lot, then maybe, but be realistic. If you shoot 1k a month of 9mm, then maybe 4-6k sitting on the shelf is a smart thing. If you generally shoot 200-300 a month, then maybe 1k of bulk on the shelf is the smart play. During our current situation, or pandemic, most urban ranges are closed, so for most it’s a moot point. You’re expending unnecessary resources in order to make yourself feel better. That ammo is nothing more than a woobie. Be smart with your resources; yes, we are facing a pandemic, but we’re not heading into a long term dystopian nightmare. OK you say, but you need ammo in case you have to “bug out.” Bug out where? Are you going to the hills? Do you know how to survive in the wild? Do you have room for the five cases of bulk ball ammo along with room for food, kids clothes, water, wife’s stuff, etc? You’re not going from Bill in accounting to Bill the Warlord of the suburban foothills. Calm down. If a true bug out is in your cards, you already know that you’ll be traveling light.

Let’s be smart and talk about an intelligent “loadout.” Be realistic, we’ve already figured out you’re not going to head to the hills like the Wolverines in Red Dawn. What you need is enough high quality ammunition to defend yourself against the threats that have occasionally popped up during periods of unrest, like the looting we saw in the wake of Hurricane Katrina. Have a quality rifle and a quality handgun with spare parts and at least 16 magazines for each. 10 magazines to train with and 6 to load with high quality fighting ammunition. Shoot the fighting ammo once every 18 months to rotate it and reload the magazines with fresh ammo. While that might be an optimal loadout, you can scale it. If you have limited resources, cut it in half. As someone who has actually been in a few gunfights, I can tell you that it’s worth the expense to invest in a relatively small amount of high quality ammunition rather than having cases of ball ammo sitting un-shot on a shelf in your command center…Errr, I mean garage. Understand that even in those situations, most violent encounters are generally played out with a pistol, much like everyday life. Do you remember hearing about the crazy running gun battles coming out of Hurricane Katrina? Yeah, me neither. Your time and resources are limited, direct them accordingly.

What about the new people waiting in those gun and ammo lines? I certainly hope that they’re the silver lining in this situation. Every person that we get on our side of the gun control debate is a win. If you know a new or potentially new gun owner, help them out. Give good, logical advice and help them avoid being price gouged by unscrupulous companies such as Cheaper Than Dirt. I was so proud when I was at my local gunshop, Smokin’ Barrel’s in Simi Valley, and I saw the owner Link, along with his entire staff, taking the time to give good advice in order to calm down panicky first-time, pandemic purchasers. I’m also begging you to refrain from posting nonsense about “taking people’s stuff” because you have guns and they don’t. People that do that are criminals and looters. Be a good reflection on the 2A community, be positive, help the new people out. Let them know that we are the good guys, even when things are bad.