Prairie Dog Hunting at the Spur Ranch in Wyoming 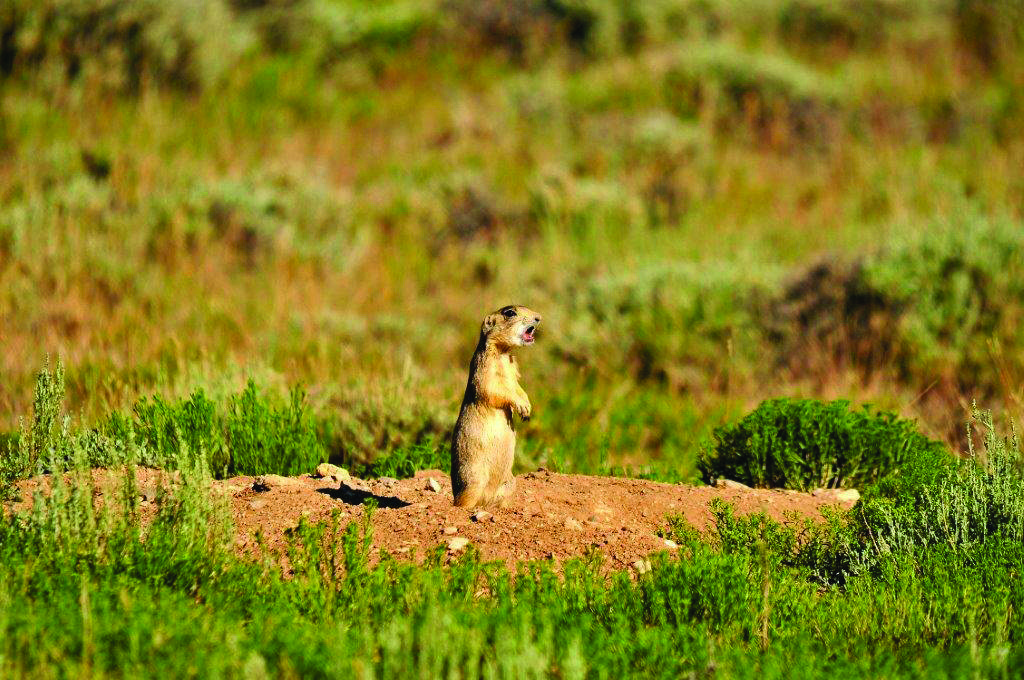 I have a confession: I’m not that into hunting. I know that’s odd for a gun writer, but it’s true. I don’t like to get up early, I don’t like to be cold, and I don’t like to sit still for hours on end. Unfortunately, “hunting” generally involves two out of three of those things. So when Smith & Wesson contacted me to invite me on a prairie dog hunt at the Spur Ranch in Wyoming, I was a little skeptical. Right up until they told me there would be AR15s and off-road vehicles provided by Yamaha.

As it turns out, hunting prairie dogs is pretty civilized. You get out of bed at a reasonable hour, eat a meal, ride around in tactical UTVs, hop out and shoot dogs whenever you see them. It’s all quite reasonable. But before we get too far talking about civilized hunting, we should really talk about the ranch. Spur Outfitters is located on the Silver Spur Ranches in Wyoming, with 55,000 acres of their own land, and access to countless acres of BLM land. The Silver Spur Ranch is also a working cattle ranch. To get to Silver Spur, we flew in to Denver and then drove about three hours north, across the pass in Medicine Bow Forest, eventually arriving at the location. Guests stay in the nicely-appointed lodge, meals are provided (and excellent) and there’s even wifi.

The hunt itself was sponsored primarily by Smith & Wesson, who provided a considerable number of guns for the writers in attendance to use. Everything was present from single-shot T/C Encore rifles all the way to suppressed AR15s in .300 Whisper/BLK. Over the course of two days, we’d shoot thousands of rounds of ammo out of the guns in a vain effort to make a dent in the Wyoming prairie dog population. 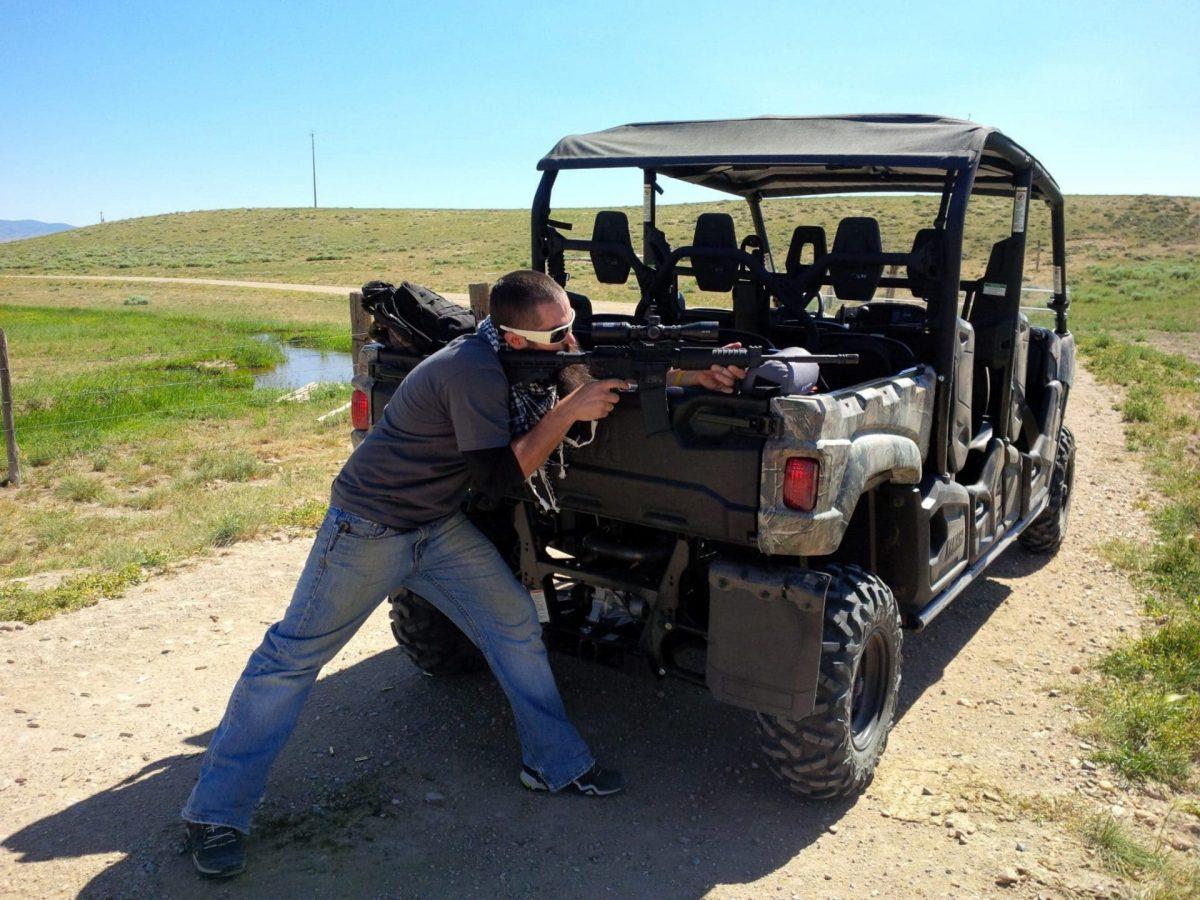 I suppose I should pause here and explain just what a prairie dog is, and why we hunt them. The short version is that it’s a filthy, disease-ridden rodent that damages crops and digs holes that cattle can break their legs in. The slightly longer version is that they carry the plague, sometimes act like zombies, and frequently eat their own wounded (more on that later). As a shooter, hunting prairie dogs presents a unique and interesting marksmanship challenge – they’re a small target, and present themselves at ranges from nearly contact distance out to 400 yards. Hitting a 15-inch tall target at 200 yards is no joke; and neither is snap shooting one that’s only 10 yards away. So, at the risk of sounding cruel, the best reason to hunt prairie dogs is that it’s fun.

Making the hunt even more fun were two UTVs provided by Yamaha. If you’re not familiar, UTV stands for Utility Task Vehicle, and covers a broad category of utility vehicles that can be used for everything from farm use all the way up to hardcore dedicated off-roaders. Our vehicles were from Yamaha’s Viking lineup. The first was a three-seater, the Viking FI 4×4 Special Edition and the Viking VI six-seater. The three-seat vehicle was configured as a two seater, with the middle seat occupied by a very useful cargo box, which was in short order filled with water and ammo.

The vehicles themselves were quite capable, and really added to the fun of the hunt. We’d roll out on to back-country at the ranch, off the dirt roads and just ramble until we saw prairie dog mounds, then we’d bail out of the vehicles and set up shooting positions. The Vikings made for great shooting rests in addition to transport; and as long as we stayed on the private property of the ranch, it was perfectly legal to shoot from the Vikings. There were quite a few times when we’d be rolling along, and either the passenger or driver would spot a prairie dog, call out its location, and then the driver would hit the brakes while either he or the passenger took a shot.

The actual hunt was great: Day 0 had us arrive at the camp, and receive a presentation from Matt Rice of Blue Heron/Smith & Wesson on the rules, safety, and of course the guns we’d be using. Then Van Holmes from Yamaha introduced us to the UTVs; a nice meal followed and then an evening’s relaxation. 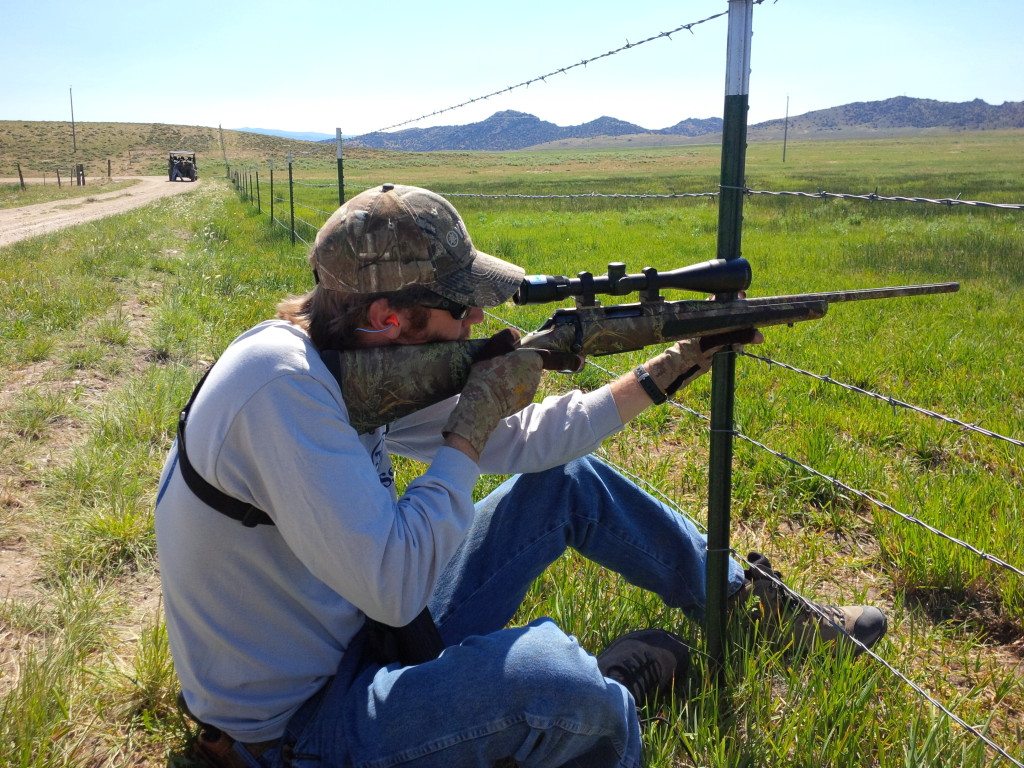 Day 1 of Prairie Dog Hunting kicked off at the entirely reasonable hour of 7 a.m. with breakfast, loaded out in the vehicles by 09:00 and headed into action. I chose to ride along with Brad Howe of ATV Rider Magazine in the Viking SE, also know as Batman’s Offroader. Van and Eric Conn from Intermedia took the six seater. To our surprise, none of the other writers opted for the off-road vehicles, choosing the more traditional pick-up trucks for their transportation. Their loss. For guns, I started my morning with a Smith & Wesson M&P-10 in .308 Winchester. Ammo was provided by Hornady in various calibers; their .308 load was the 150-grain GMX Superperformance. Its terminal effect on prairie dogs was…comical to say the least. I can confess, I’d never shot a prairie dog before, and when I hit the first one with a .308 and was treated to an explosion of pink mist, I giggled like a small child. That set the tone for the morning, as the UTV crews patrolled the landscape, stopping and shooting prairie dogs when we saw them.

A brief lunch at noon, and I switched guns out for a T/C Encore in .223. I’d never shot one, and I wondered what all the fuss was about. I discovered the fuss, and for more you can check out the review posted on Gun Nuts Media. The Encore .223 provided all the accuracy I could hope for engaging prairie dogs out to 250 yards, and again the Yamaha ATVs were a solid, stable shooting platform. Day 1 continued with a handgun-based foot chase of a jackrabbit, which was eventually put down with a .22 LR pistol on the move; and finally wrapped up as we returned to base camp over bumpy terrain, tired, hungry, and ready for a cold one. Which is exactly what we received – a great dinner, a cold beer, a hot shower.

That refreshment put us in the mood to really drop the hammer on Day 2 of my Prairie Dog Hunting experience. Directed to a freshly cut alfalfa field, I switched up from passenger to driver, and Eric joined me in the six seater. Van and Brad took the Batmobile; we’d barely reached the field when we started seeing prairie dogs come out of their holes. For Day 2, I’d selected a gun I know and like: a 16-inch S&W M&P15 MOE. This bone stock AR comes with Magpul MOE fore-end, stock, and pistol grip. Riding on top was a Bushnell AR223 3-9x variable scope. I did my best work of the hunt with this rifle. It’s important to note here that there are no magazine capacity restrictions when prairie dog hunting, so those of us with AR15s were able to lock and load up to 30 rounds in our magazines. 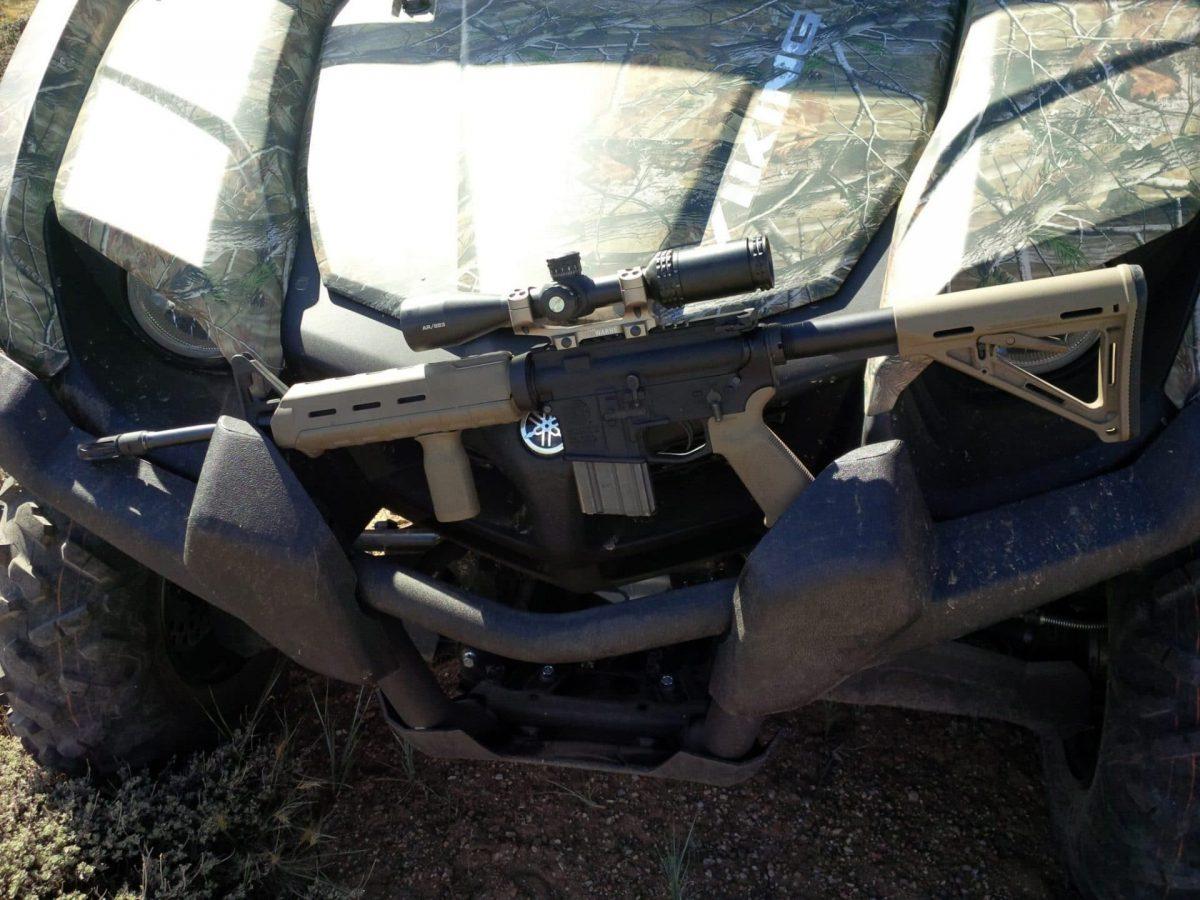 We turned that cut alfalfa field into a prairie dog slaughterhouse. Shoot one, two more would pop up to see what the sound was. This was where I was treated to my first ever incidence of prairie dog cannibalism; I shot a plains rat at about 50 yards, and as he flopped over, another prairie dog popped out of the hole and started eating the innards of his buddy. I shot him too. We kept shooting. We shot until our guns were hot and our trigger fingers were tired.

After returning for lunch, we set out one last time in the vehicles for our last outing. After two days in the hot Wyoming sun, we were all a little tired, but that didn’t stop us from getting our last kicks in. After stopping three times and smashing dozens of prairie dogs, were about to pack it in and head to basecamp, when we came upon a huge group. Sure, we were supposed to be back at basecamp 30 minutes ago, but we all still had ammo left.

The verdict on prairie dog hunting for me? It’s the most fun I’ve ever had with a gun in my hands that wasn’t a full auto. The hours are civilized, the shooting is challenging, and if you’re lucking enough to have a cool vehicle like the Yamaha Viking, you can go anywhere. Roads? We don’t need to stinkin’ roads.

By Caleb Giddings. Originally published in the August 2014 issue of GunUp the Magazine.

“This is my BOOM STICK!” This classic movie line embodies much of what people see in shotguns. Few firearms conjure up as much folklore and cliché as the shotgun. It has been a long-time staple of those serious about home defense, but it shares an equal-sized crowd of uncertain or fearful onlookers. They are loud,...

Dear Santa…ok, maybe that might be a bit much, but I would like to officially lodge a complaint with the Bureau of Christmas gifts choice and distribution (BOCGC&D). Like everyone, I am genuinely thankful for gifts received at Christmas. But deep inside where your self-focused 5-year-old self still resides, you secretly wish you had gotten...

Wilson Combat is now offering the Wilson Combat-Beretta Brigadier Tactical 92 with a Vertec-grip frame conversion. This conversion, performed by Wilson Combat, reduces the size of the frame to the significantly smaller Beretta Vertec size which is ideal for shooters with smaller hands or who prefer the straighter, more 1911 style grip. Related Videos: Wilson Combat’s...