This Tuesday, the ATF, the federal agency responsible for investigating instances where firearms are lost or stolen from federal firearms licensees (FFL), released its Calendar Year (CY) 2016 FFL Thefts/Loss Report. (ATF’s news release and links to the report can be found below). 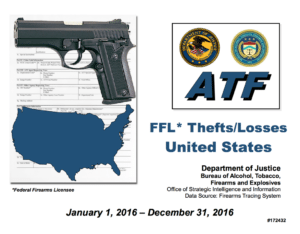 The informational release is only four weeks ahead of the 2017 FICC where ATF, NSSF, and Orchid Advisors will speak to the report and best practices in retail security. Firearm industry retailers, as well as manufacturers, and wholesalers are encouraged to attend the only scheduled event in 2017 featuring these three groups.

About the Event: Best Practices in Retail Security

Attendees can inquire directly about the fflAlert program, regulations, licensing and other related matters. Licensees will also be able to meet with other industry professionals and retail store security providers.

The two-and-a-half-hour session will include:

The following is ATF’s Press Release, verbatim from their website, www.atf.gov.

WASHINGTON – The Bureau of Alcohol, Tobacco, Firearms and Explosives (ATF), the federal agency responsible for investigating instances where firearms are lost or stolen from federal firearms licensees (FFL), is releasing its Calendar Year (CY) 2016 FFL Thefts/Loss Report, available on the ATF website, www.atf.gov. Part of the ATF core mission is to protect the public from violent crime involving the use of firearms, including firearms stolen from FFLs and used by violent offenders in the commission of crimes, posing a substantial threat to the public and law enforcement.

A total of 18,394 lost or stolen firearms were reported nationwide last year from FFLs. Of those firearms, 9,113 were reported as lost. Firearms are considered lost when an FFL takes a firearm into its inventory and later cannot account for the disposition of the firearm from its inventory during an inventory reconciliation.

There were 9,281 firearms reported stolen by FFLs in CY 2016. Stolen firearms are broken down into three reporting categories: larceny, burglary and robbery.

Additionally, the report includes a statistical state-by-state breakdown. Georgia had the highest total of stolen and lost firearms with 1,593, followed by Florida with 1,260 and Texas with 1,247.

FFLs must report each lost or stolen firearm within 48 hours of discovery of the loss or theft by completing and forwarding a report to ATF. In addition, the FFL must also report the firearm loss or theft to the appropriate local law enforcement agency.

In an instance where an FFL discovers that firearms are lost or stolen, ATF Industry Operations Investigators (IOI) will assist the FFL in determining exactly which firearms are missing from the FFL inventory. As of March 10, 2017, there were more than 136,000 FFLs in the U.S. and its territories.

It should be noted that some states have more FFLs than other states. Higher numbers of thefts or losses from FFLs in a particular state do not necessarily indicate higher rates of firearms being lost or stolen from FFLs per capita.

ATF is the lead federal law enforcement agency with jurisdiction involving firearms and violent crimes, and it regulates the firearms industry. More information about ATF and its programs is available at www.atf.gov.”