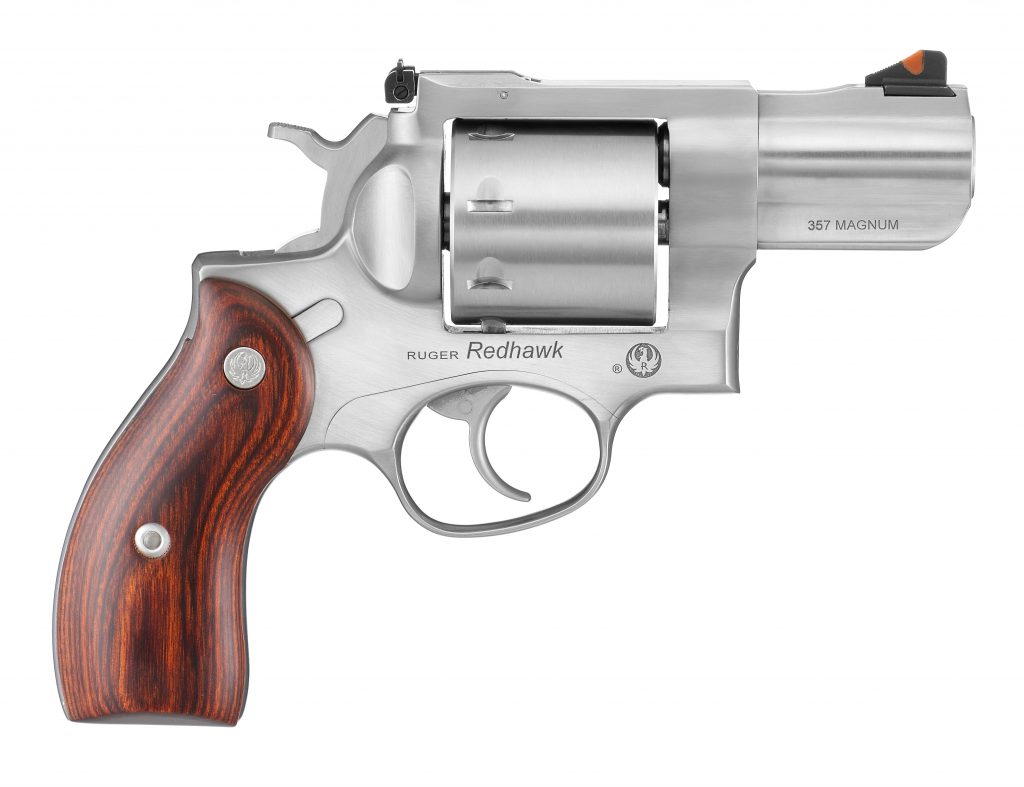 The newly introduced 8-Shot .357 Magnum Ruger Redhawk represents visible proof that reports of the revolvers’ demise have been greatly exaggerated. “What more can be written about a .357Magnum revolver?” I ask for a chance to explain. Eight-rounds of .357Magnum in a reliable package will entice many back to the revolver fold.

The oversized stainless steel cylinder clearly showing more than six holes is a clue — something out of the ordinary is going on in revolver land with the new Redhawk. Ruger handguns are notorious for being overbuilt able to digest the hottest loads of a particular caliber without a hiccup. With its 2.75″ barrel the .357Mag Redhawk could be confused as “snubby” on steroids if only looking at the specification sheet. This will be debunked as soon as the squat 44 oz. Redhawk is picked up. The Redhawk is not fitting in your swim trunk’s front pocket and ankle carry will cause a severe limp and hip injury.

What the Ruger Redhawk .357Mag offers is simplicity and ruggedness combined with an upgrade over the normal six rounds associated with revolvers. Revolver aficionados have always laid claim to reliability as a defining feature. In a nutshell, some individuals are just more comfortable carrying a revolver. With the eight-shot .357Magnum Redhawk, revolver advocates now have a weapon with the same capacity as the legendary 1911.

“Countless studies show personal defense encounters are settled one way or the other with the ammunition in the handgun.”

The .357Mag Redhawk’s eight-round capacity is a 33 percent increase in firepower over the six holed revolver cylinders we are more accustomed to. The .357Mag cartridge represents the near perfect combination of controllability, power, accuracy, and lethality in a pistol cartridge. I challenge the reader to add up the ft/lbs of energy stored in the Redhawk’s cylinder and compare it to the number of 9mm, 40S&W, and 45ACP rounds required to equal the muzzle energy resting in the eight holes. Eight 125-grain 357 Magnum rounds combine for 4992 ft/lbs of energy. To equal this you need 15 rounds of 9mm, 11 rounds of 40S&W, and 13 rounds of 45ACP. I think this get my point across.

The three moonclips included with the Redhawk shows Ruger’s attention to detail. The ability to use either moonclips or regular loading methods is a feature usually reserved for high-end pistolsmith work. The moonclips greatly improve reload times and convenience of carrying extra ammunition.

The Ruger’s single-action trigger measured a crisp 5.5 lbs. using a RCBS trigger gauge with no creep and the double-action at 13 lbs. with no stacking evident. Ruger’s use of a single spring mechanism is the reason behind this. The Redhawk has a triple locking cylinder maintains alignment with the heaviest of loads. The lack of side plates further contributes to stout Ruger lore. Ruger chose not to relieve any material from the exterior of the cylinder feeling this was prudent after boring out eight holes in the hunk of metal. A patented transfer bar mechanism provides mechanical insurance against accidental discharge if dropped.

The Ruger Redhawk On The Range

Range testing utilized Black Hills, Hornady and Federal ammunition. Both .38 Special and .357 Magnum loads were used with bullet weights spanning 125-grain, 140-grain, and 158-grain loads. A huge benefit of anyone choosing to carry the Ruger Redhawk .357 Magnum is the ability to practice with .38 Special loads. .38 Special loads are more economical and not as harsh in terms of recoil/blast. This is not something to be underestimated. I practice with .38 Special rounds when I want to work on shooting fundamentals without wrestling with the .357’s full power recoil and muzzle blast. Practice with .38 Special aids in building confidence and exposes recoil induced bad habits. My adolescent son had no problems controlling the 44-ounce Redhawk when firing .38 Special loads. The Redhawk’s grip size deserves some of the credit for this too. The 2.75″ barrel does cause quite a stir when shooting .357 Magnum loads with the 125-grain varieties seemingly producing more muzzle flash and blast than the heavier bullet loads. I found the 2.75″ barrel and associated sight radius length more than adequate for a personal defense revolver.

Range evaluation consisted of a test regimen made up of engaging multiple steel and paper targets, firing while moving, reloading from cover, and engaging targets from behind barricades. The moonclips proved a definite advantage in reloading during these scenarios. The Redhawk with its adjustable rear sight and red front ramp proved more than capable of ringing steel targets 35 yards away. In fact, when having the time to deliberately aim and fire, steel man targets over 100 yards away were not safe. That is more enough accuracy for a personal defense handgun. For fun challenge, clay pigeons were routinely shattered at 35 yards firing offhand. I evaluated the Redhawk with numerous trips to Echo Valley Training Center, which is equipped with falling plate racks, dueling tree, and other training devices.

Another side note of my range experience is after thousands of rounds fired in semi-automatic handguns, I quickly relearned revolvers require a slightly different firing grip. A thumbs forward grip doesn’t work well next to a revolver’s cylinder. Thumbs need to be curled downward — the tips of your thumbs will thank you. This lesson was learned early in nearly 300 rounds fired during numerous range visits.

As with most things related to firearms, handgun selection is a personal decision often based more on intuition than fact based reasoning. The Ruger Redhawk 8-shot .357Magnum is a viable personal defense handgun that levels the playing field between revolvers and semi-automatic handguns. The Redhawk is no “snubby” and should be thought of as an equal to the 1911 and various other single stack magazine handguns currently on the market.