SHOT Show 2014: The Woman, the AR, and Everything Tactical 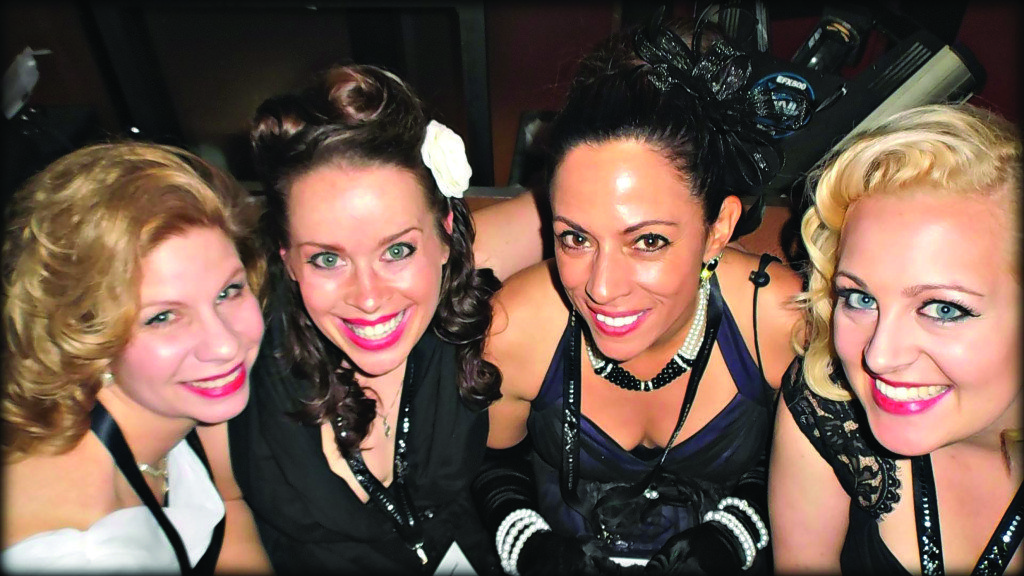 Of all the times to make that New Year’s resolution! In January, my husband and I thought it would be a good idea to give up drinking for one month. When we chose January, we had forgotten that we would be in Las Vegas for SHOT Show 2014. Going to Vegas and without a martini? The thought of walking miles of floor space and schmoozing with hundreds of people without a refreshing reward at the end of each day seemed impossible. It nearly was impossible, but I survived. I was actually thankful each morning as my alarm went off and I awoke bright eyed rather than blood shot; I needed that energy. The enthusiasm of SHOT Show 2014 was a night and day difference from the dour mood of SHOT 2013.

Thankfully, sales are still booming for most companies this year, but it appears that the backlog has diminished, unless you are trying to find .22 LR ammo. SHOT Show is the fifth largest trade show in Vegas, and this year saw record attendance. Every one of the 65,000-plus people had an agenda: exhibitors, dealers, writers, bloggers, lobbyists, competitors, celebrities, sniper record breakers, heroes, you name it and they were here with a mission. My personal agenda wore several faces. I was a writer, blogger, competitor, and sponsorship collector. I wanted to find the latest and coolest gadget or gun to write about as well the best components and gear for me to use this year for my competitions, and along the way I had some exciting distractions. 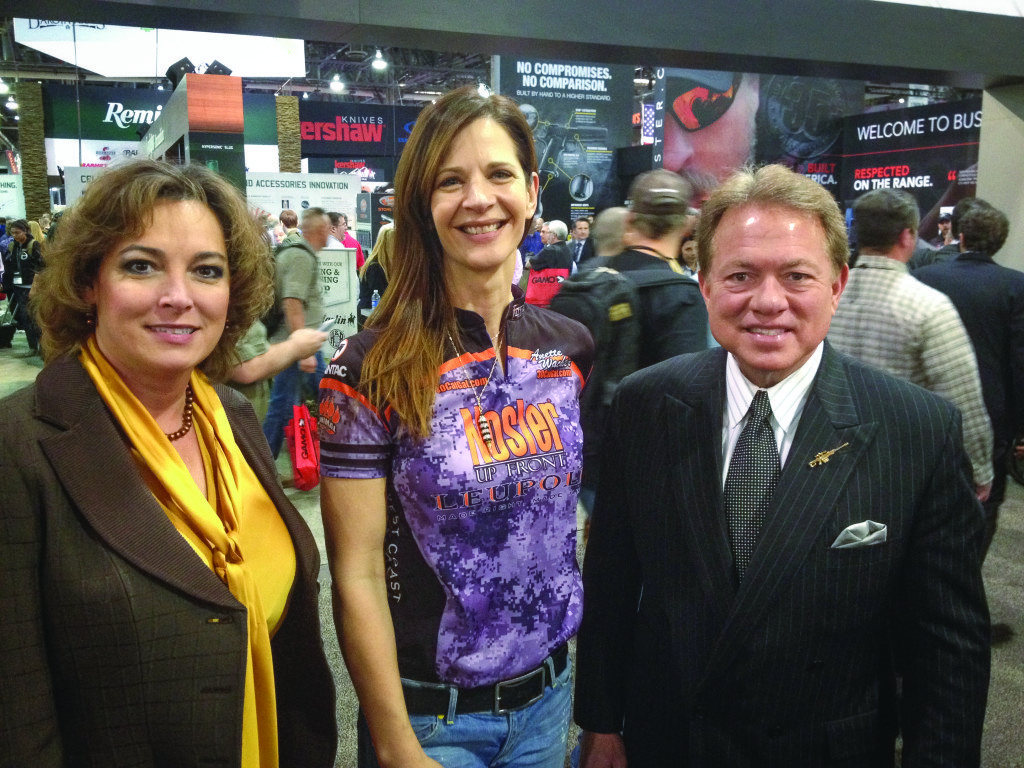 Meeting the ultimate icon of tactical: Ronnie Barrett along with his wife Donna.

AWR Hawkins, writer and blogger for Breitbart News found me in the convention hall. Breitbart asked him to talk to me about writing for them as a female voice of the gun industry. The folks from Trigger Time TV put me in the line-up to audition for a new show for The Blaze TV that may get produced. I was honored on both accounts. Hopefully by the time you read this GunUp issue I will have an answer on both.

The most interesting part of SHOT for me each year is not just the latest product, but I like to pick out and highlight the overall theme or characteristics that stood out. For me, this was the year for The Woman, The AR and Everything Tactical.

As I walked by the NRA booth a smiling Natalie Burkolder greeted me, although she had grown a bit since I last saw her because she was 20 feet tall. Standing next to her was Julie Golob, also 20 feet tall. Two beautiful images of the ladies lit up on display for all to see from across the convention hall, Jessie Duff was larger than life on billboards throughout the show, and women hunters lit up dozens of exhibitor booths.

This was only my third trip to SHOT but the focus on women in this industry has exploded in just that short amount of time. The representation of so many professional women in their field was truly refreshing. Companies have done their homework and have taken the statistics to heart, after all women are the fastest growing customer-base in the gun industry. There were nearly as many female celebrity booth appearances as there were male. If you paid attention to the interviews NRA News was giving all week you would have noticed that a majority were of women. Susan LaPierre, the first lady of the NRA, was a joy to meet and she was a great influence in starting the NRA Women’s Network.

On Wednesday night, over 200 women left SHOT Show for a night out in Vegas. Dressed up in “Hollywood Glam” we descended upon the V-Bar in the Venetian. Networking was quickly replaced by socializing as the drinks were poured. This was an opportunity to blow off some steam and catch up with friends and acquaintances in the industry. As expected, this group of women closed the bar down. Remember, what happens in Vegas stays in Vegas! Some great raffle prizes were given out to a lucky few, I was one of those lucky ones and won a Kimber 9mm that was worth my trip to Vegas. The event was made possible by a variety of great sponsors including GunUp the Magazine, Galco, Remington Arms, LaserMax, NRA Women’s Network, Outdoor Channel, 2 Vets Arms and Louka Tactical. 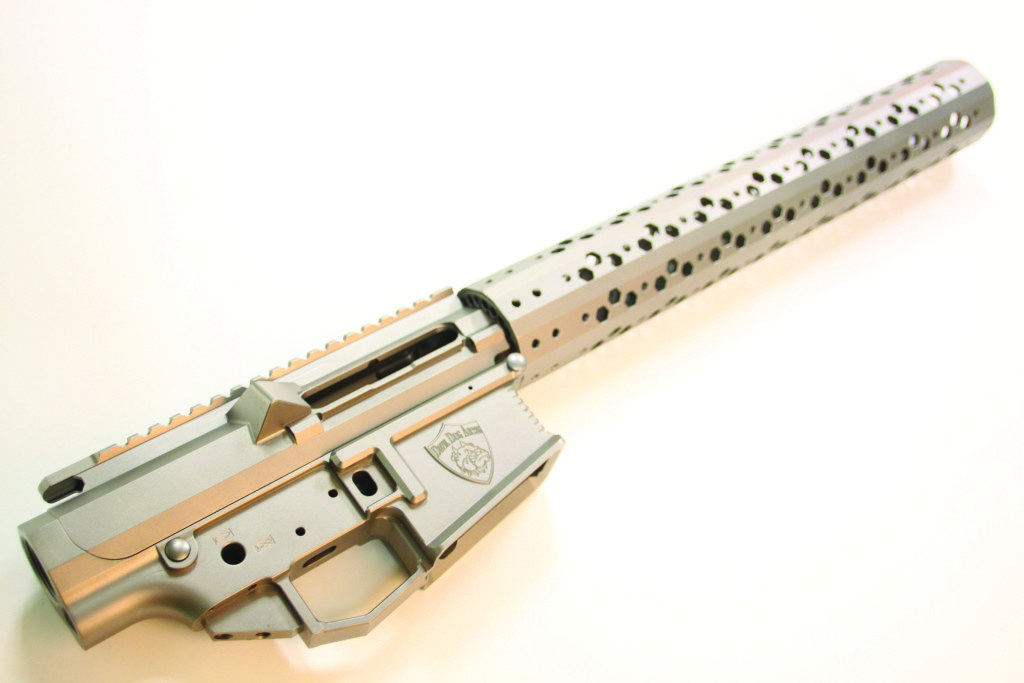 It is Raining ARs

We all love our “modern sporting rifles,” but who knew that the business of building ARs would take over the world. There were hundreds of vendor booths selling “the best AR on the market.” There were also a hundred start-ups that could not get a booth that were walking around with lower prototypes in their duffel bags. It is so easy now to build your own rifle on your kitchen counter that I wonder how one company stands out from another anymore. The push for more .308 semi-autos was evident this year, as well as creative finishes and unique accessories, there was a move to get away from all black. I am not one for a pink- or pattern-dipped gun but I did loved some of the new finishes. Devil Dog Arms showed me their .308 prototype, called the Cerebus, which had a pewter color finish all of the way through. One of the accessories by Mega Arms stopped traffic; it was a tiny little level. The Megalithic Tactical System is a level that is hidden in between the upper receiver rail and the hand-guard rail. With one easy twist and pull, it slides out to the side in perfect view as you are in position on the cheek weld, a small but very clever way to stand out from the crowd. 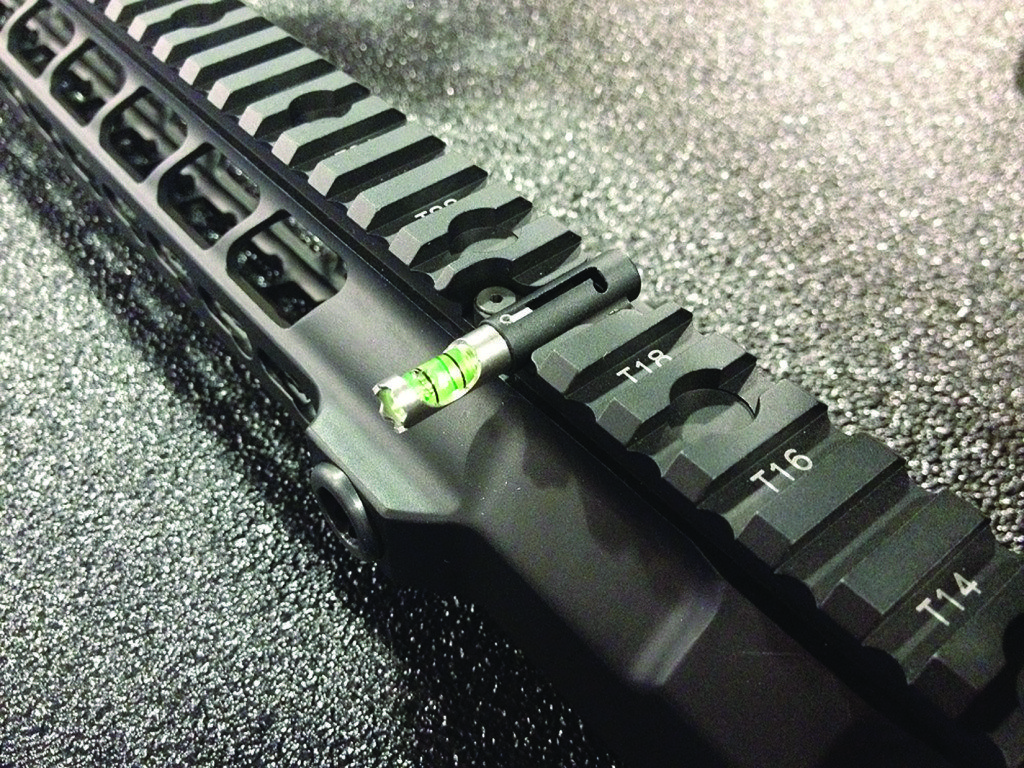 As a competitor I follow the trends of shooting disciplines. Unfortunately I am watching the interest in my specialties of Palma rifle and High Power fade away, it is pretty old school and, according to many, boring. Cue in F-Class, 3-Gun and Precision rifle. Two out of these three are fast paced and all three offer modern tactical equipment, and black rifles and bolt actions are anything but boring.

SHOT Show had no shortage of tactical; I witnessed many new designs of chassis, scopes, bi-pods, tactical clothing and accessories. One product I just have to mention is the $700, 360-degree rotating bi-pod by Elite Irons. Of course this stood out, but was it state of the art or overkill?

I spent much of the show surrounded by muscled, tattooed and bearded guys with tight black t-shirts, tactical pants and boots. I affectionately referred to the omnipresent beards as Tacti-Beards. My most memorable beard meeting was with Frank Galli of Snipershide.com, I finally met the face behind the forum nickname “Lowlight.” It happened to be the same evening as the Women’s Industry Dinner and I was wearing my 4-inch heels. Frank was not, apparently, wearing his. We have a great photo together where I am towering about a foot over him. His personality and success is larger than life and I especially love that he is making room for women in his Snipershide Series of matches.

What is the ultimate icon of tactical? This would be Barrett. I could not have been more thrilled when my friend Lars Dalseide of the NRA introduced me to Ronnie Barrett and his wife Donna. He spent a great deal of time with me showing me photos on his phone of their most recent hunting trip. He explained in detail his new rifle design that was on display in the NRA booth. He even followed up the next day by sending me the photo we took together. Am I star struck? Yes. Wouldn’t you be? 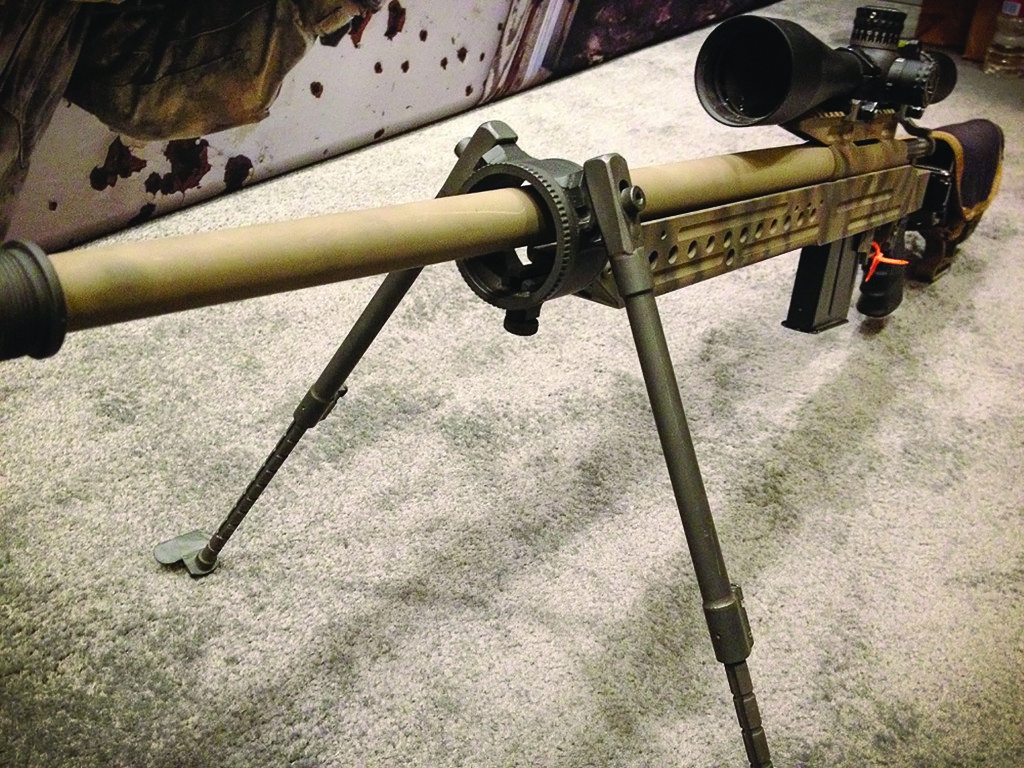 With great respect, and saving the best for last, it seemed as though I could not throw a stick without hitting a modern day hero at SHOT, from Medal of Honor recipients to the men with the longest or most sniper kills. The most recognizable face was Marcus Luttrell. If you have not been living under a rock than you know his story was featured in his book, as well as the blockbuster film, Lone Survivor. 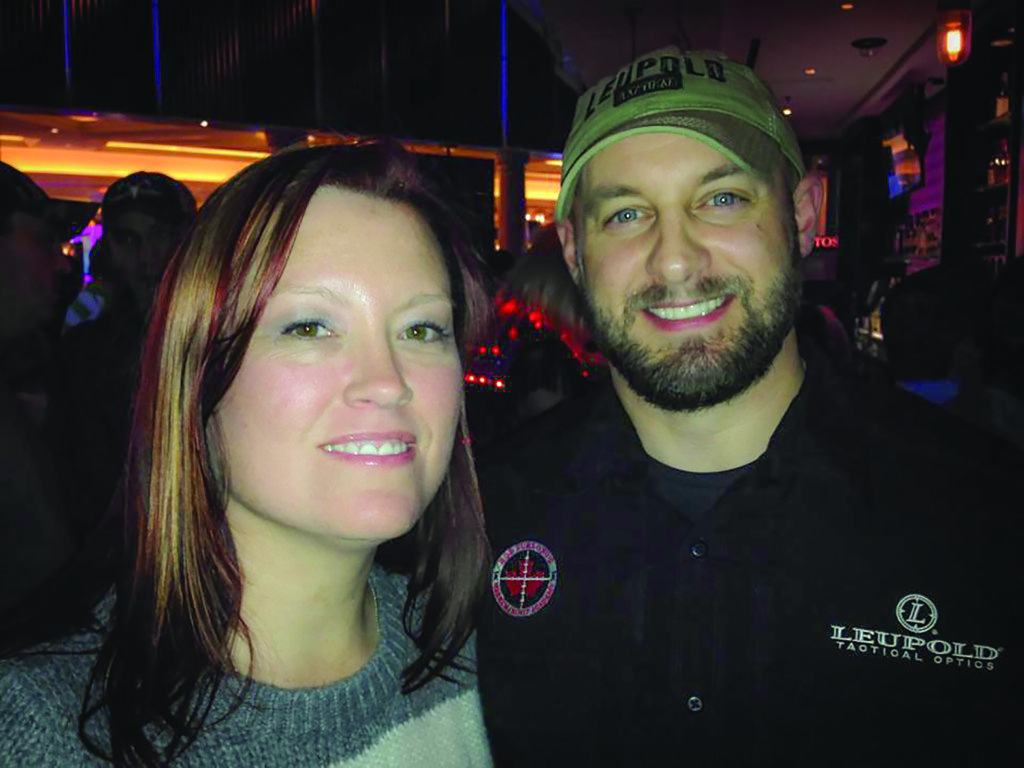 My precision rifle pal Regina Milkovich and Rob Furlong, a former sniper with the 3rd Battalion, Princess Patricia’s Canadian Light Infantry. Rob is best known for holding the previous record for the longest confirmed sniper kill in combat, at 2,430 meters.

My precision rifle pal Regina Milkovich hung out with Marcus and also Rob Furlong, a former sniper with the 3rd Battalion, Princess Patricia’s Canadian Light Infantry, best known for holding the previous record for the longest confirmed sniper kill in combat, at 2,430 meters. I also met MSG Jim Gilliland who bested an Iraqi insurgent sniper with the farthest confirmed 7.62×51 mm NATO kill in Iraq or Afghanistan. A recent Medal of Honor recipient, Clint Romesha was nearby as well. Clint survived a battle in Afghanistan and saved many of his comrades while under fire from the Taliban. These people and all of those that serve were the stars of SHOT Show.