Byrna HD Personal Security Device is a Launcher for OC & CS Pepper Balls. This is a Non-Lethal option for Self defense.

The firearm is the main weapon for self defense protection. There are times where you need a non lethal option because of firearm restrictions or it just doesn’t warrant you shooting someone. Today we are going to look at a non lethal option. The Byrna HD Personal Security Device gives you a lot more capability than say pepper spray or a knife.

One thing about the HD is that you can get back to 60ft. This is critical because you can really put some distance between yourself and the attacker. What you’re doing is giving yourself some time to get out of the area.

The Byrna HD comes in a small zippered case that has foam padding inside. Within the case, you get two magazines, the HD, two CO2 cartridges, and three sets of five different rounds.  You can attach lasers to the bottom of the HD because of the rail.

The HD does have a holster that you can purchase that works great for a hip piece.

When firing, the HD felt a lot like a paintball gun. When testing the pepper balls, your eyes, skin, nose, and lungs all feel terrible when breathing in the pepper. Robbie from Wheaton Arms had to pour water in his eyes for five minutes to be able to open them.

The HD is a polymer finish and has a rubber mold around the grip. It has an ambidextrous safety that works great. On the front of the HD is a picatinny rail that allows for either a laser or a light. The HD has a standard magazine release behind the trigger, which is standard, and it just drops the magazine free. There are also black raised sights on the front and the back.

The CO2 goes into the whole, at the front of the HD, underneath the barrel. Use the allen key on the magazine to unscrew the cap and then drop the cartridge in. Simply screwing the cap back on will not pierce the CO2 cartridge. You must put the HD on safe and then pull the trigger to pierce the CO2.

The HD does fire a .68 caliber round. However, to be safe, order all your ammunition from Byrna because those rounds are the ones meant for the HD.

There are no federal laws that regulate the HD. You do need to be eighteen years or older just to own this. There could be state or local regulations on them so make sure you check those first before you carry this because this is not a firearm.

The HD does look very similar to a gun so if there is law enforcement around, be careful with it.

The kit, as seen in the video, without the laser, costs $349. They do offer a number of different type rounds and colors for the HD.

Head over to the Byrna website to check out all the different options and attachments for the HD. It is a very effective non-lethal self defense weapon. It is great for self-defense for both people and animals.

Big thanks to Getzone.com for their help in putting this video together. 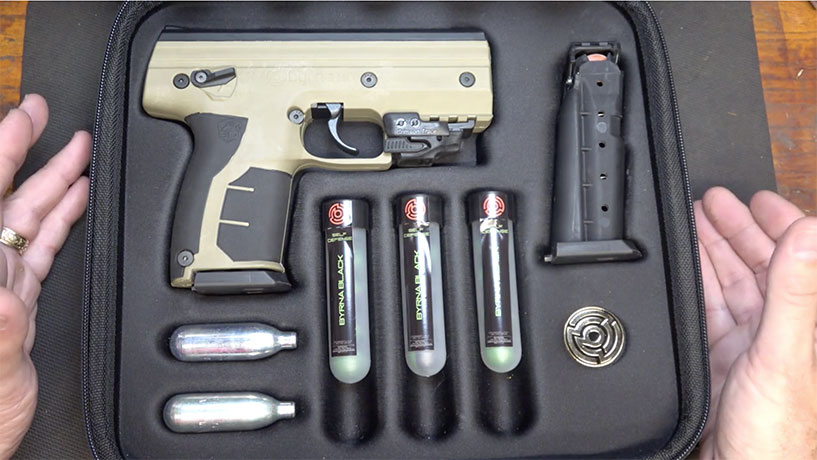 Be a Team Sootch Minuteman: https://www.patreon.com/Sootch00

“When it comes to expressing traditional American Values on the web, you won’t find a better place than GetZone.com. We’re in the battle of our lives to preserve the 2nd Amendment and Hunting Rights. We needed a family-friendly platform to get the message of Freedom out there and GetZone.com is like coming Home,” said Don Porter/Sootch. Read more on Sootch’s partnership with GetZone.com due to YouTube’s continued censorship.