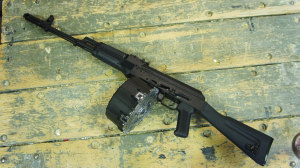 The original standard Saiga .410 is a vast departure from the stylized SGL-41 sold by arsenal. The original shotgun, manufactured by ISHMASH in Russia, was a simple self-loading smooth-bored shotgun featuring a .410 gauge barrel and able to accept ammo as either shot or slugs, including Magnum rounds with up to 76 mm cartridge cases. It was developed on the base of Kalashnikov rifle in order to demonstrate equivalent reliability. On importation, Arsenal modified the firearm and replaced many of the pieces with AK-74 parts. Including the handguards, gas block and gas tube, front and rear sights, buttstock, pistol grip, muzzle brake and bayonet mugs. Some of these changed meant modification had to be made to the receiver itself, as ISHMASH had developed the shotgun to comply with strict “sporting gun”standards for importation.

We Like
The .410 round is extremely versatile, providing sufficient ballistics for a good home defense round. During testing out of an 18-inch cylinder bore, four common defensive .410 rounds: Winchester Super-X 3” 5-pellet 000 buck, Remington 2.5” 4-pellet 000 buck, Winchester PDX1 Defender .410, and Federal Premium Personal Defense .410 3” 5-pellet 000 buck all performed satisfactorily, with 2.4-4” patterns at 15 yards and 13-18” of penetration in ballistics gel. The gun is also easy to shoot. The muzzle brake and sufficient weight bring recoil down to a level manageable for almost any shooter. The controls will be familiar with anyone has had the opportunity to handle an AK-47 or -74 platform rifle, the iconic simplicity is mirrored in the SGL-41. Thanks to the variety of magazines available the SGL-41 has a widely varying capacity that can be altered depending on the gun’s purpose and how comfortable the shooter is with the weight. The firearm can be used with 4- or 10-round straight magazines, or a 30-round drum that GunUp is currently shipping with SGL-41s purchased from our shop. The SGL-41 is also compatible with many AK-74 parts, meaning that it’s possible to switch out the handguard to one that has a picatinny rail and therefore have access to accessories such a sling mounts, flashlights and lasers. You can also switch out the buttstock, pistol grip and other AK-style parts with ease. The one thing to watch when switching out parts is how the parts will fit over the gas tube and the larger barrel, it’s best to read reviews prior to purchasing. Most prominently, the SGL-41 has an undeniable “cool factor.” The idea of a .410 gauge AK-platform shotgun is novel, and the tactical AK-platform is on the rise in popularity, especially with how difficult it’s been to find AR-style guns lately. For those who are fans of the AK-platform and are seeking either a shotgun or a firearm just for fun at the range the SGL-410 is a no-brainer. It looks good, it shoots well, it’s easy to use, and would be useful even to teach new shooters.
The SGL-41 makes a lot of sense for current AK owners who are seeking a shotgun, because of the standardized platform the SGL-41 will be second nature to those are well-versed in the AK platform.

We Don’t Like
Not everyone is comfortable using the .410 round for self-defense, and due to the capacity of the magazines the SGL-41 isn’t practical for hunting purposes in many circumstances. While the round is easy to shoot, many shooters feel that it is limited in usefulness. The SGL-41 has classic 1,000 meter sights that are out of place on a shotgun, which is not going be able to hold a group nearly that far out. While the sights do hold with the classic AK-style look that has made the Saiga popular, the traditional iron sights are not practical. Because of the AK-style set-up it is also far from easy to switch out the sights to something that may be less in line with the styling but would make more sense. The SGL-41 is a far cry from the most practical shotgun on the market, but not all guns are designed to be practical, some guns are just designed to be awesome.

The Verdict
The SGL-41 holds value in its inherent ability to be fun and look awesome. It’s not the most practical gun on the market, although it could be used as a home defense firearm or even in some limited hunting applications. (Check your state laws for guidelines.) The Saiga is for people who think AKs are cool and people who think shotguns are cool, and very much so for people who think both in one is even better. The SGL-41 falls distinctly into this category, even with its ease of use and possible home defense applications. The easy to shoot .410 round makes it an ideal option for newer shooters who may be intimidated by larger caliber shotguns. At the end of the day, it doesn’t really matter how you feel about AKs or the .410 round. TheSGL-41 is wonderfully impractical, a ton of fun to shoot and just plain awesome.