When I first started shooting, it was with shotguns. Every week I went out to the range with a group of my friends and we shot Skeet, Sporting Clays, or Five Stand. There was nothing quite as satisfying as blasting away at clays on the weekend to help me escape. At the beginning, I was using the club’s Berettas, usually a 20 gauge, semi-auto over under, to this day I couldn’t tell you what model it was but I loved it. Eventually I decided it was time to buy my own, I was 20 so my budget was low and my options were slim, and after some research I decided on a CZ Mallard. It’s a gun I have to this day.

As I developed in my shooting career, my taste for shotguns changed too. The next stage of my shotgun interest was home defense. I picked up a used Winchester 1300 cheap to keep around the house. This gun became my first 3-Gun shotgun a few years later.

When I started shooting 3-Gun my shotgun situation was a trainwreck. I had the 1300, a pump 12-gauge, which eventually was traded in for a SAIGA that broke on the very first stage of the very first match I brought it to. I borrowed a Mossberg 930 JM for the rest of the match, but I had no idea how to reload it.

Today, I own my own 930 and have learned how to reload it – even if I’m not good at it. Fortunately for all of us there are a lot of excellent competition shotguns out there, for both the 3-Gun circuit and the clay sports, that come in at varying price ranges depending on your budget and what you’re looking for.

Hopefully this guide can save someone the heartache that I experienced. 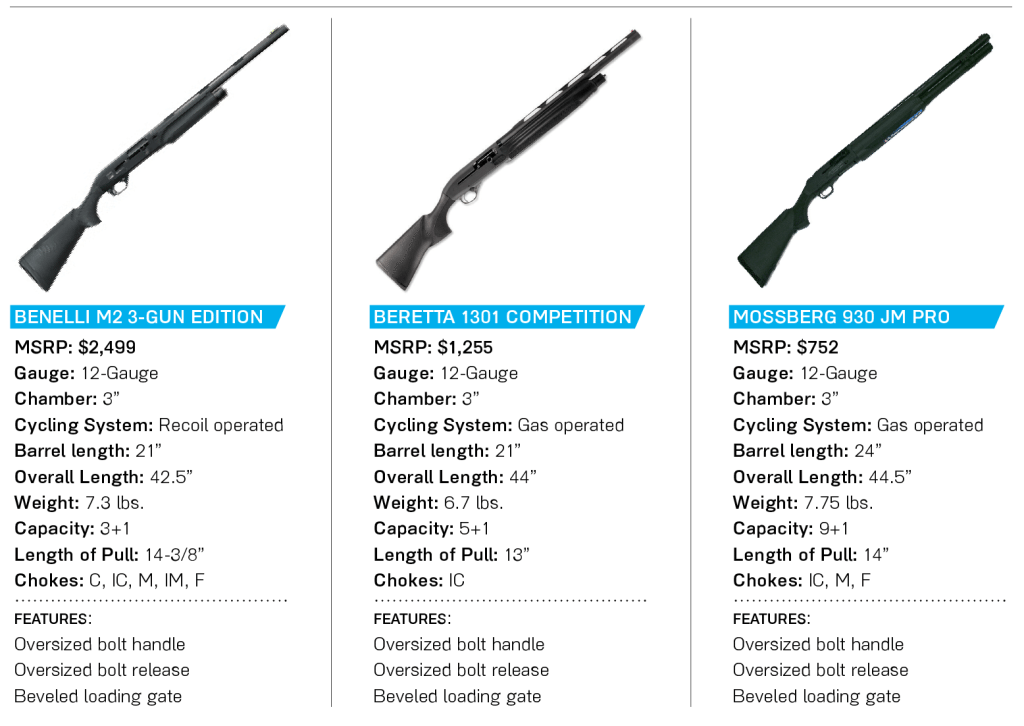 The shotgun you choose for a 3-Gun match can make or break your competition. There is no right answer, though. There are a lot of factors that play into what makes the “right” shotgun, from what division you shoot to what your budget is to what length of pull your looking for.

I’ve chosen to focus on shotguns that would be used in the Tactical Optics or Tactical Irons divisions. Buying a shotgun for the Open Division is a completely different experience, since most of them need to have a significant aftermarket work done to them.

There are two big things that I have heard 3-Gun shooters (and experienced myself) concern themselves with when it comes to shotguns: the reliability and the loading gate. Having a reliable shotgun is fairly self-explanatory, having to clear shotgun malfunctions costs valuable time and can really mess up a match. I experienced this at the Lady 3-Gun match earlier this year, where, between having to manually rack the bolt after shots and having extra reloads added to my run, I zeroed a couple stages. That was my fault for letting my shotgun get dirty, but it was a very clear lesson on the importance of having reliable and clean equipment.

The loading gate complaint is often related to a thumb bite that can occur on reloading. While, hypothetically, if you are reloading properly (or at least the way Lena Miculek taught me at Crimson Trace’s Midnight 3-Gun Invitational) you will completely avoid it, it’s quite easy to get your thumb caught in the loading gate while you’re trying to, if you’re like me, uncoordinatedly jam shells into a shotgun and shuffle toward your next target at the same time. It hurts, and sometimes bleeds, a lot.

There are a lot of competition shotguns on the market, but I’ve chosen three that are favorites of mine and the pros that span a wide price range: from $752 to $2,499. Every single one is a great gun and a good option, but by looking at the statistics we can take an objective look at what you’re getting for that extra money. 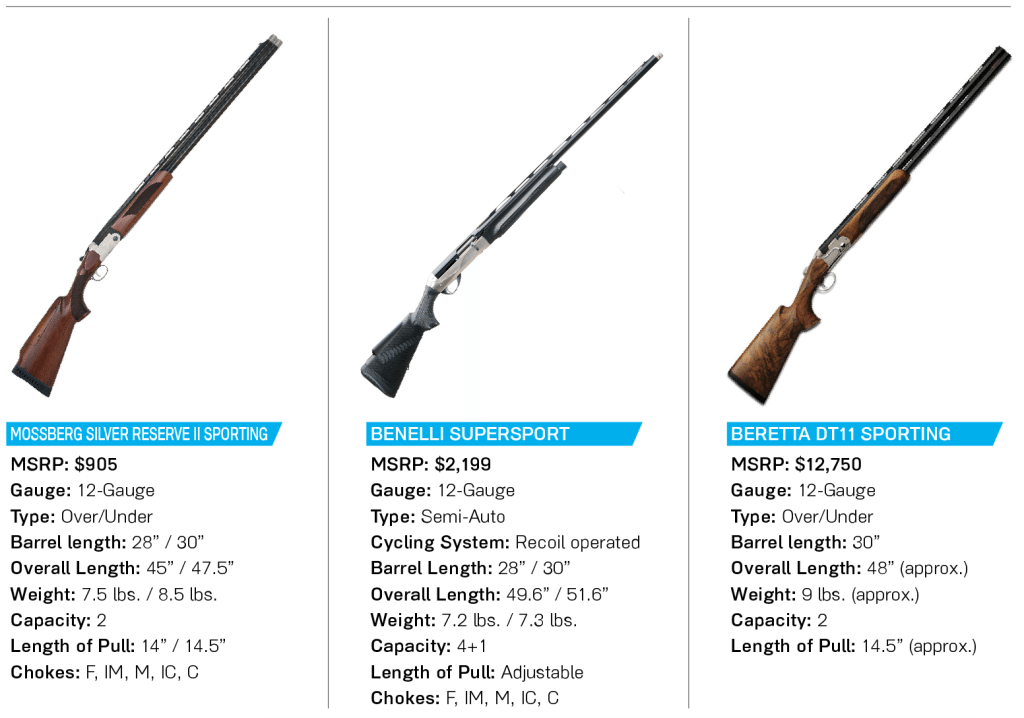 I’ve seen people successfully shoot clays with 12-, 20-, 16-guage shotguns, and even .410s. While it will be easier to hit clays with a larger spread pattern, smaller calibers are going to have less recoil. Another thing to consider is the ammunition: while 12, 20, and .410 ammunition is easy to find, 16-gauge is a more obscure caliber and you may have difficulty finding ammo.

Another thing people talk about when it comes to clay shooting guns is barrel length. Barrel length will affect both your shot pattern and your swing, many shooters prefer longer barrels, saying that they make it easier to track the pigeon and decrease the distance between when the shot starts spreading and when it hits the bird. Personally, I prefer a shorter barrel, since it makes the gun lighter and easier for me to hold and shoot throughout the day – swinging a 32-inch barrel around all day takes larger arm muscles than I’ve bothered to develop.

When shopping for a clay sports shotgun there are more options as to what kind of gun you want too. Since, unlike 3-Gun, you’re only taking up to two shots at once, over/under and side-by-side shotguns are popular, as well as semi-autos, in this arena. While I’ve always been a big believer in “the fewer moving parts, the less there is to break” the semi-autos tend to have less recoil and can certainly be just as reliable as an over/under or side-by-side.

For the sake of representation, I’ve chosen four guns in a wide variety of prices. From the $583 MSRP Mallard that I bought new for $400 six years ago, to Beretta’s DT11, whose base models start at $12,750. They’re all beautiful guns, and they’re all excellent guns, but I’ll be honest – there’s nothing I love more than drooling over a DT11, except maybe drooling over a custom Perazzi.

Originally published in the January 2015 issue of GunUp the Magazine.