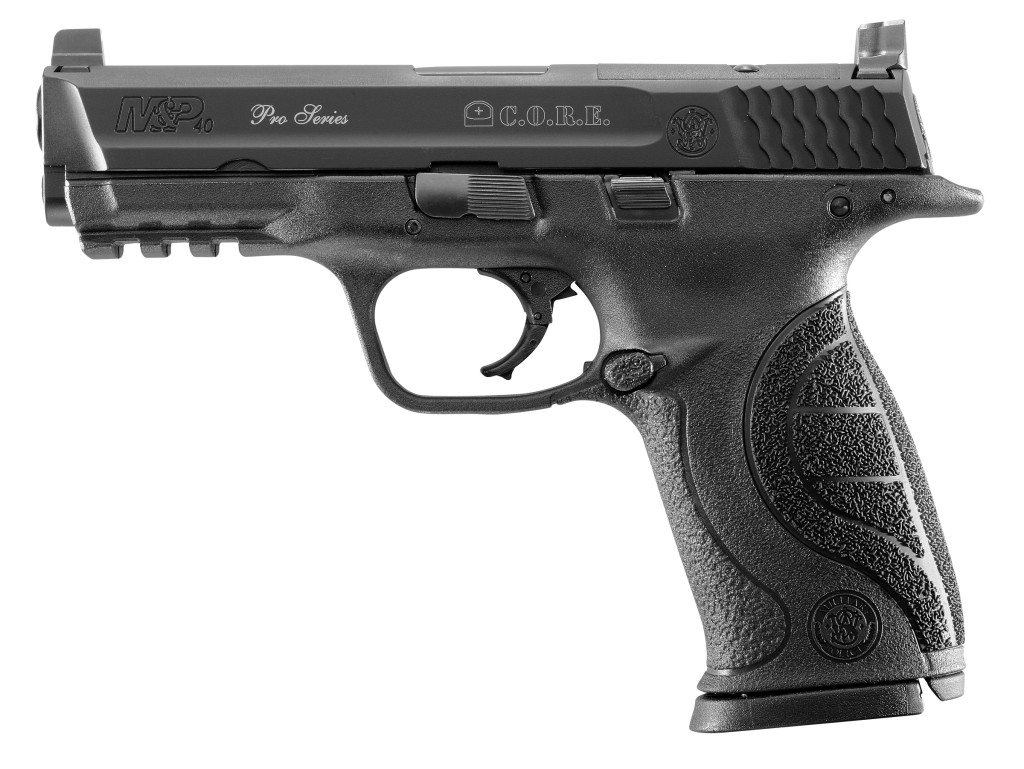 On November 7, 2012, right in the middle of the National Association of Sporting Goods Wholesalers (NASGW) Expo that attracts thousands of firearms industry professionals every year, Smith & Wesson put out a press release announcing their new and revolutionary M&P Competition Optics Ready Equipped (CORE). 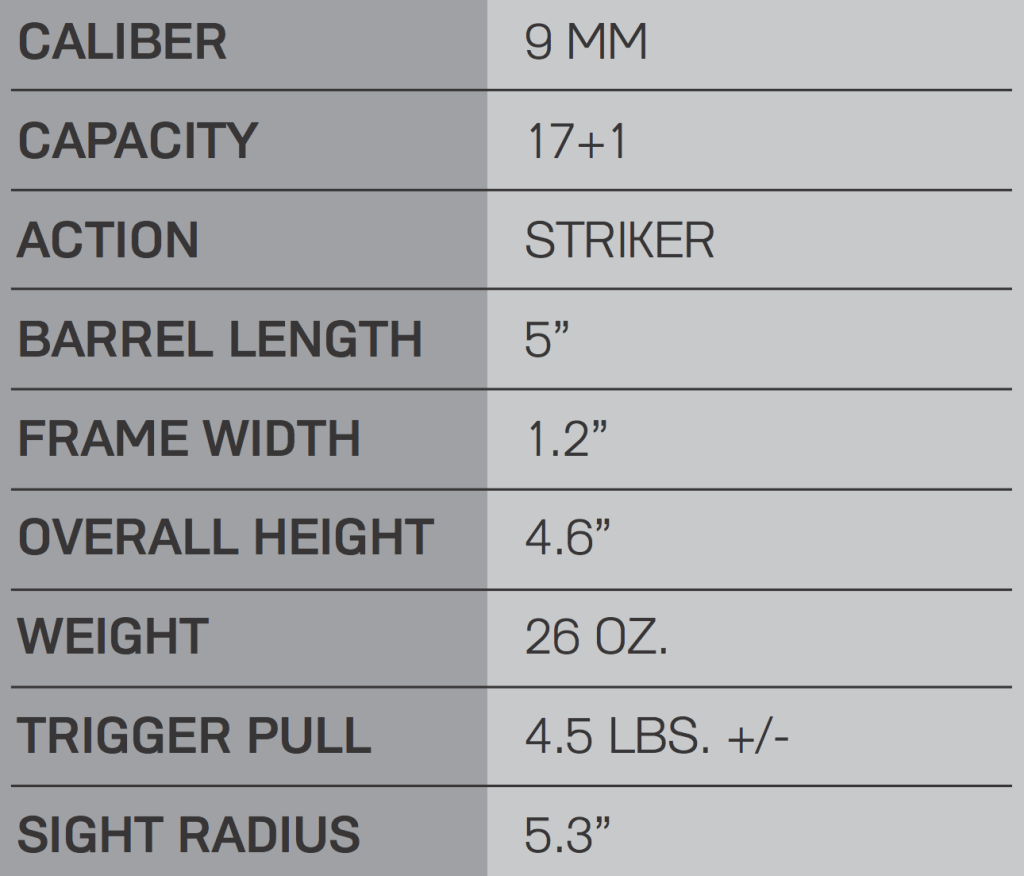 There are four different models of the CORE, it is available in both 9mm and 40 S&W with either a 4.25” or 5” barrel. The one used in testing for GunUp the Magazine was a 9mm with a 5” barrel.

The idea of a polymer handgun that is ready from the factory to accept micro red dots is still very new. The idea of carrying with a red dot is controversial, some claim that the small optics aren’t sturdy enough or don’t hold their zero well enough for the daily wear and tear that a concealed carry firearm goes through. Proponents of the carry style believe that not only are the red dots sturdy enough, but they provide a valuable tool to help shooters be more accurate in stressful defensive situations. 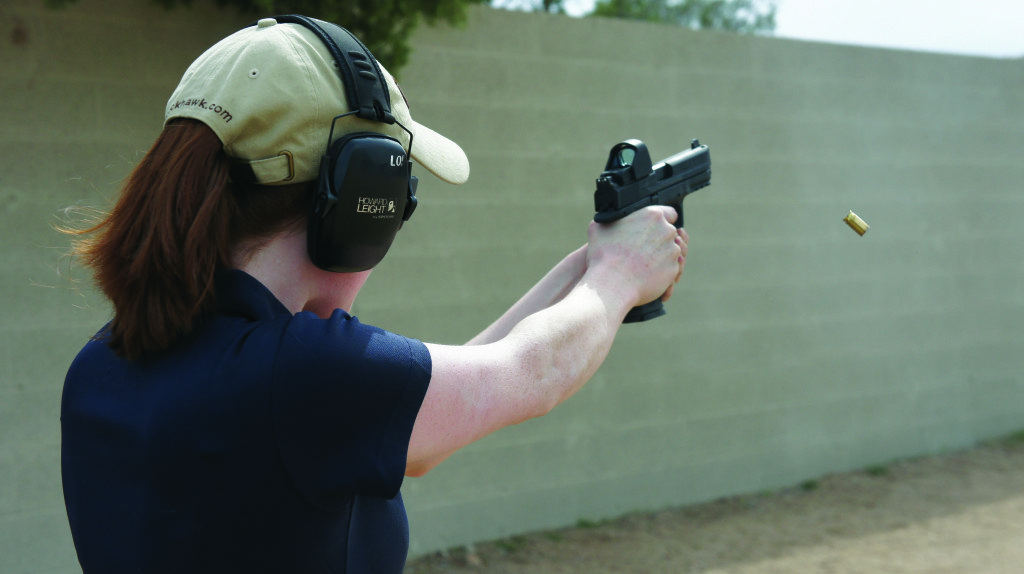 For those who may not feel entirely comfortable with the concept of carrying a red dot it’s important to note that the CORE has taller iron sights that co-witness with the red dot and remain useful should your red dot go down for whatever reason. In fact, the firearm is fully functional without the red dot – it’s basically an M&P Pro Series with taller iron sights.

Not everyone may want to use the CORE for concealed carry, luckily it serves many other functions as well and would be great as a home-defense gun, since the red dot is going to be a lot easier to use in the dark than iron sights, and a fun range toy. The good news is, since the gun is already a proven platform, there is not a lot of question on reliability and there are already many aftermarket parts available for it, meaning that shooters can customize the gun to suit whatever function they plan to use it for.

The optics that Smith & Wesson has chosen to make the CORE compatible with are all high-quality red dots from companies with good reputations. The installation is easy and only takes a couple common tools, which means that if you get a new red dot or wish to remove it there is not a lot of work involved. Also, because of the way the CORE is set up: with several different mounts and mounting screws that are interchangeable depending on the optic, there are other optics besides the recommended six that use the same mounting mechanisms and can be placed on the CORE.

For the CORE, Smith & Wesson also made some minor changes to their popular line. For example, the backstraps, which are easily interchangeable between three different sizes, now have a light texture on them. For those who are used to heavy stippling on their gun this texture probably won’t cut it, but for those who are looking for just a little more grip without the intense and sometimes uncomfortable texture of heavy stippling the new backstraps are ideal.

Because the CORE is built off of an already proven design, shooters can feel comfortable in the gun’s reliability. This also means that those who are already comfortable with the M&P platform, especially the most recent Pro Series guns, will find the operation and trigger pull familiar.

Aside from the fact that not everyone may be comfortable carrying a micro red dot the CORE has all the downsides associated with the M&P Pro Series. The M&P has a history of accuracy problems with their factory barrels, according to an informal test done by 10-8 Performance (10-8performance.com) these problems were mostly eliminated with newer barrels that were phased in at the beginning of 2012 and could be avoided through the use of 147 gr. 9mm ammunition in the older barrels. It will be interesting to see how the M&Ps reputation for accuracy improves moving forward. It’s difficult to test because the change isn’t very noticeable until shooting out at 20 to 25 yards, a distance that not many handgun owners choose to shoot at on a regular basis. 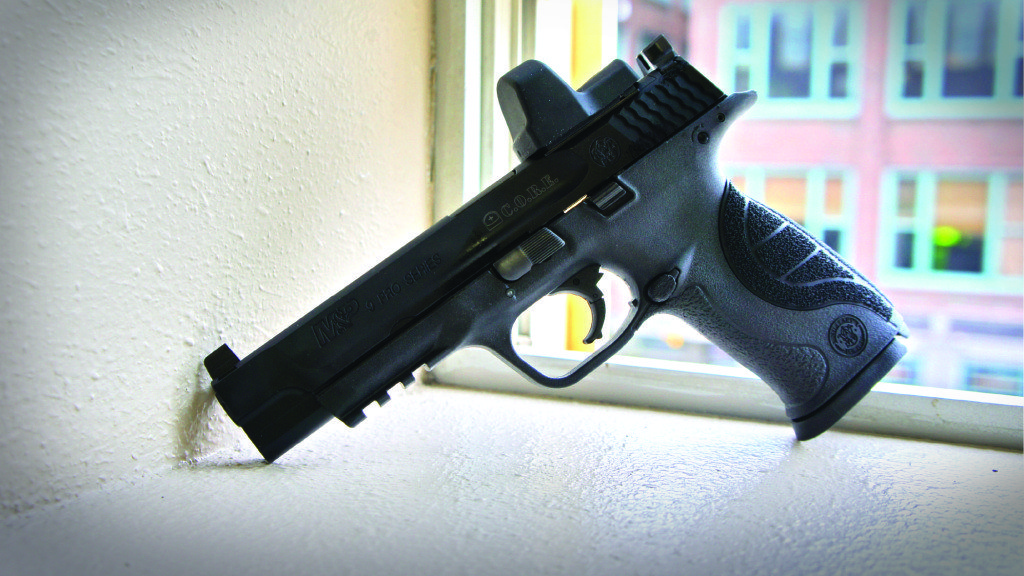 Another common critique of the M&P is the trigger. For those who aren’t used to it the M&P trigger can feel squishy and the reset can be difficult to find. Shooters will find that the CORE trigger has a much more positive reset than past M&P triggers. The 4.5-pound trigger is completely manageable, but for those who really don’t like it APEX Tactical Specialties makes a variety of affordable drop-in trigger kits that can be used to tailor the feel of the M&P to the shooter’s preference.

When it comes to competition the CORE is ahead of its time. While M&Ps are frequently legal for the production division, the addition of a red dot automatically puts the CORE in open against all of the crazy race guns. For shooters who are really just trying to get practice in with the gun they carry or keep by their bedside it doesn’t particularly matter, but unless the sports change their division rules it will be extremely difficult to be competitive with the CORE.

The CORE is a gun ahead of its time. For many it will make a novel range toy, for some it will be a great home defense gun, and for a few it will be a great concealed carry option. What shooters choose to use the gun for will depend on their comfort with the fairly new concept of mounting mini red dot optics on handguns. It will be interesting to see where the CORE takes us and whether or not this and similar firearms will pave the way for changes in the marketplace, in competition and in concealed carry.

The changes that Smith & Wesson has made to the CORE relative to their rest of the M&P line show that they are listening to feedback and making the changes necessary to continue to improve the line. While not everyone will find a use for the CORE, it remains a reliable gun with a variety of uses in a proven and comfortable platform, which is a combination that’s hard to beat.

Originally published in the July 2013 issue of GunUp the Magazine.