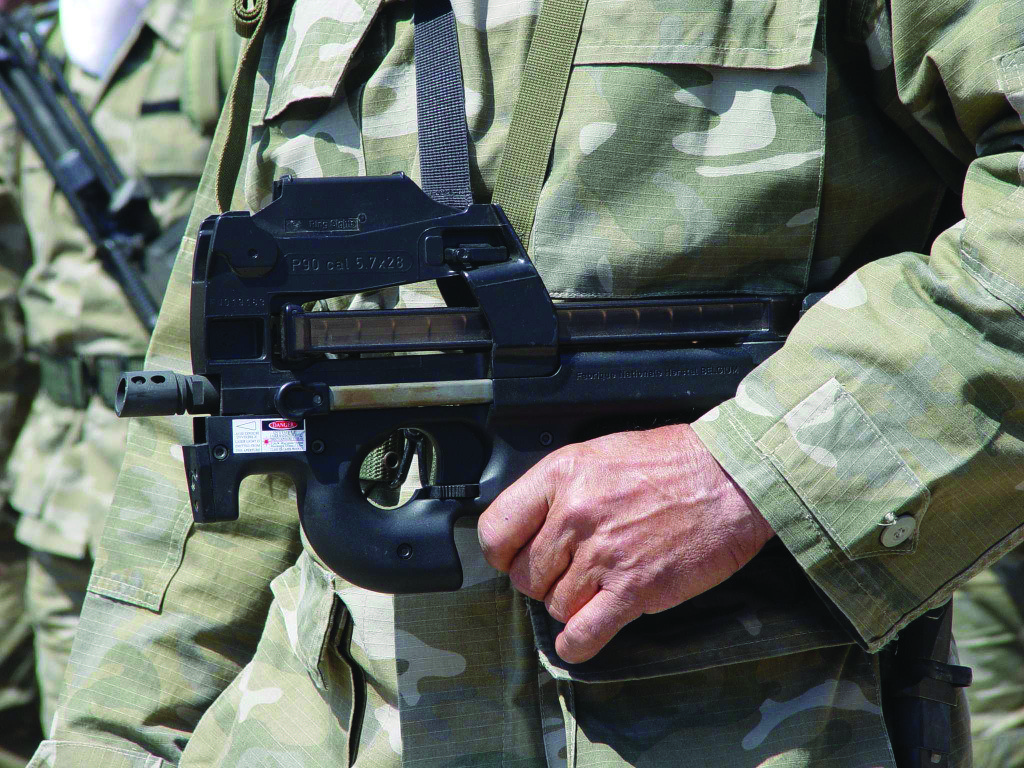 In 1986 Belgian manufacturer FN Herstal began development on the select-fire P90 and its propriety cartridge, 5.7x28mm. Production of the firearm commenced in 1990, upon its introduction the 5.7x28mm round was redesigned and shortened. In 1993, in conjunction with the FN Five-seveN pistol which uses the same ammunition, a modified version of the P90 was released that included a magazine which had been adapted for the more current version of the 5.7mm round.

The P90 and PS90 feature a curious top-loading magazine. Rounds are loaded into the magazine much as you would load a pistol round, however when putting the second round in the first round is pushed down and rotated, as are all subsequent rounds, stacking the ammunition sideways and giving the PS90 its full 50-round capacity. Once loaded, the magazine is snapped into the top of the firearm, and empty brass casings are ejected out the bottom.

Related Content: The FN SCAR 20S is the Solution for Accurate Long-Range Shooting

The PS-90 is designed to be fully ambidextrous. The safety, magazine release, and charging handle are uniquely crafted for both right- and left-handed shooters.

Rather than the regular safety located on the side of the gun, the PS90’s safety is a switch that sits just forward of the trigger and is easily flipped with the trigger finger.

Another curious aspect of the PS90 is the design of its iron sight system, which is actually crafted into the top rail. A small peephole on the back of the top rail system shows the front sight. The system is barely visible until you have the gun shouldered.

The 5.7x28mm is a unique and controversial round. Regardless of how you feel about it though, the recoil of this little gun is more than manageable. Because of its low felt recoil, the PS90 was a staple at the NRA’s 2013 Women’s Wilderness Escape. The attendees, most of whom were new or inexperienced shooters, were grateful for the low recoiling round.

The PS90 is also one of the few fully ambidextrous firearms on the market, and is one of the only whose ejection pattern won’t bother a left-handed shooter any more than the right. While the bottom-extraction may seem strange to those used to the AR15 or other semi-automatic platforms, it makes for an even playing field no matter which hand’s finger is on the trigger.

The bullpup design also makes the PS90 comfortable for smaller-framed shooters who may struggle with the length of pull on larger guns. This, in combination with the low-recoiling round, makes the PS90 a great gun for any new, smaller-framed shooter to get a start on. While the controls may seem complicated to an experienced shooter, for someone who is not used to how firearms work, the top-loading magazine and oddly-located safety selector become easy to use quickly. Plus, most new shooters will be excited by the futuristic design.

We had the opportunity to observe a highly-used PS90 rental gun over an extended period of time. While it did require occasional cleaning, overall it performed well. At one point, a magazine was smashed into the gun, cracking the frame at a pre-existing wear point. Even despite this breakage, the gun continued to operate safely and without issue.

The PS90 is also easy to disassemble and clean. A large, metal button is located underneath the magazine. After performing a chamber check, one simply presses the button and slides the barrel and bolt system out of the plastic frame. The trigger group is also easily removed by flipping a level located behind the butt plate.

The civilian version of the P90 is not as great of a home defense gun as it may appear from the gun’s impressive list of military and law-enforcement adopters. The 5.7x28mm ammunition that is available to civilians lacks the ballistic performance of that available to law enforcement and military contracts, on top of this, because the PS90 is semi-automatic, it lacks the ability to spray rounds in the same volume as the P90. Plus the ammunition can be expensive and difficult to source.

The rail on the PS90 is also placed very high. While the lack of recoil means this isn’t necessarily a problem, it’s an uncomfortable position to shoot in for experienced rifle shooters.

The safety switch, located directly in front of the trigger, raises some safety questions. While usually operated without issue, it does seem like it would be easy to accidentally pull the trigger while fiddling with the switch, possibly causing a negligent discharge.

The gun’s inability to perform a simple chamber check also raises some safety concerns. In order to check the chamber, according to the gun’s manual, the magazine must be removed and the bolt locked back. While most other guns allow for a quick chamber check just by running the bolt or racking a slide (if a round falls out, or the bolt or slide doesn’t lock open on an empty mag, you have a problem and should do a full safety check) the PS90 requires you to pull out the magazine and run the bolt, which is locked open through a plastic flap located within the ejector port on the bottom of the gun; this must be pushed up to lock the bolt in place.

For those familiar with the AR15 platform, there is a learning curve to learning how to handle the PS90s bolt, magazine and safety. The gun takes some getting used to, and requires quite a bit of practice to be truly proficient with.

The PS90 lacks practicality as a home-defense or competition firearm, however that doesn’t mean it’s not a fantastic gun to own. Fun and easy to shoot, neat to look at, and a great option for new shooters, the PS90 has a definite home in the gun safe.

On top of its usability as a plinker or introductory gun, the PS90 has an undeniable “cool” factor. It’s been featured in plenty of movies and television shows as a futuristic space-gun thanks to its unique looks.

Even when the PS90 isn’t a practical purchase it can be a difficult one not to make. The futuristic look and fun, low-recoiling round make it an original addition to any collection.

Originally published in the May 2014 issue of GunUp the Magazine.

Henry Repeating Arms is known for its quality Lever Action Rifles, but the Long Ranger Express takes it to a whole other level. When the Henry Long Ranger was released in 2016, we set a new bar in lever action precision. Combining bolt action accuracy with the speed of a lever gun, the Long Ranger’s...

One of the most popular offerings from Springfield Armory has undoubtedly been the Prodigy!The DS Prodigy™ from Springfield Armory takes the proven 1911 platform and enhances it with double-stack capacity and a performance-driven feature set. Reconfigured around a double-stack magazine, the DS Prodigy’s polymer grip module mounts to its forged steel frame offering capacities of...

The Mossberg MC2c handgun holds 16+1 rounds at the ready in a sleek, compact, ergonomic design! With a wide range of finishes and sighting options, you’ll always have just what you need for personal and home protection. Backed by the reliability and innovation that makes it a Mossberg. MOSSBERG MC2C SPECS: CAPACITY: 10+1, 14+1, and...