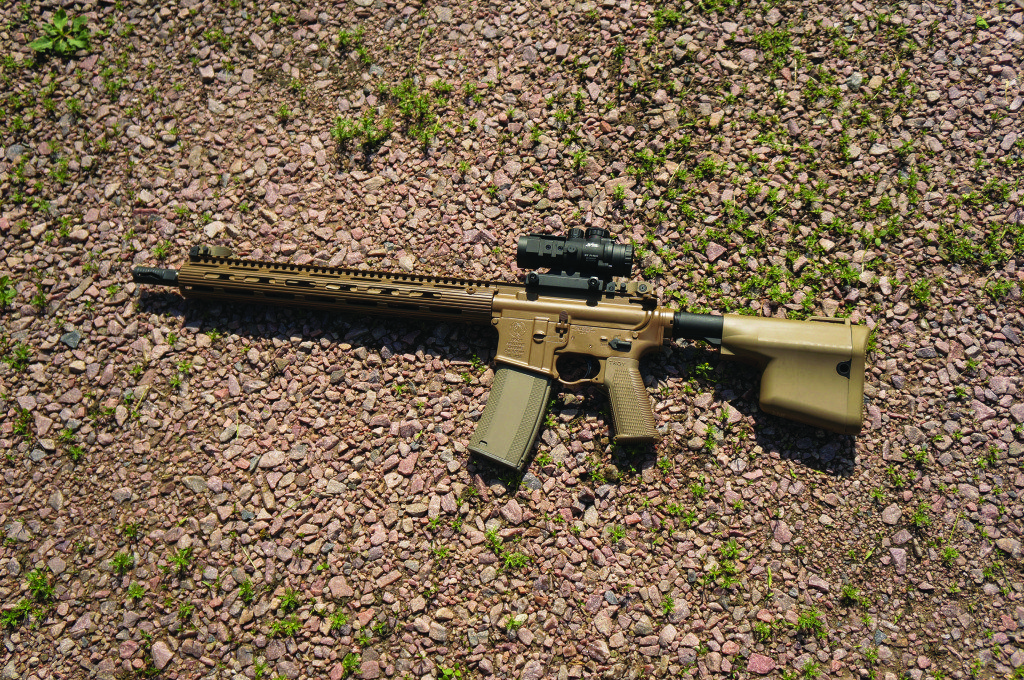 In the gun world, big name trainers and shooters will sometimes add their name and design touches to firearms. Designed in collaboration with former Delta Operator Sergeant Major Kyle Lamb, the appropriately named Lamb Carbine uses the retired SMG’s technical and practical expertise with Troy’s engineering to build a rifle suited for multiple roles. Kyle Lamb spent over 15 years with the U.S. Army Special Operations community, including fighting in the Battle of Mogadishu all the way through deployments in the Global War on Terror. In that time he’s learned a thing or two about how to set up a rifle. Since retiring from the Army, he has become a highly sought after trainer and speaker in his role as the head of Viking Tactics (VTAC).

Basically, the gun comes right out of the box with everything you need to set it up. Just add an optic and you’re ready to roll. 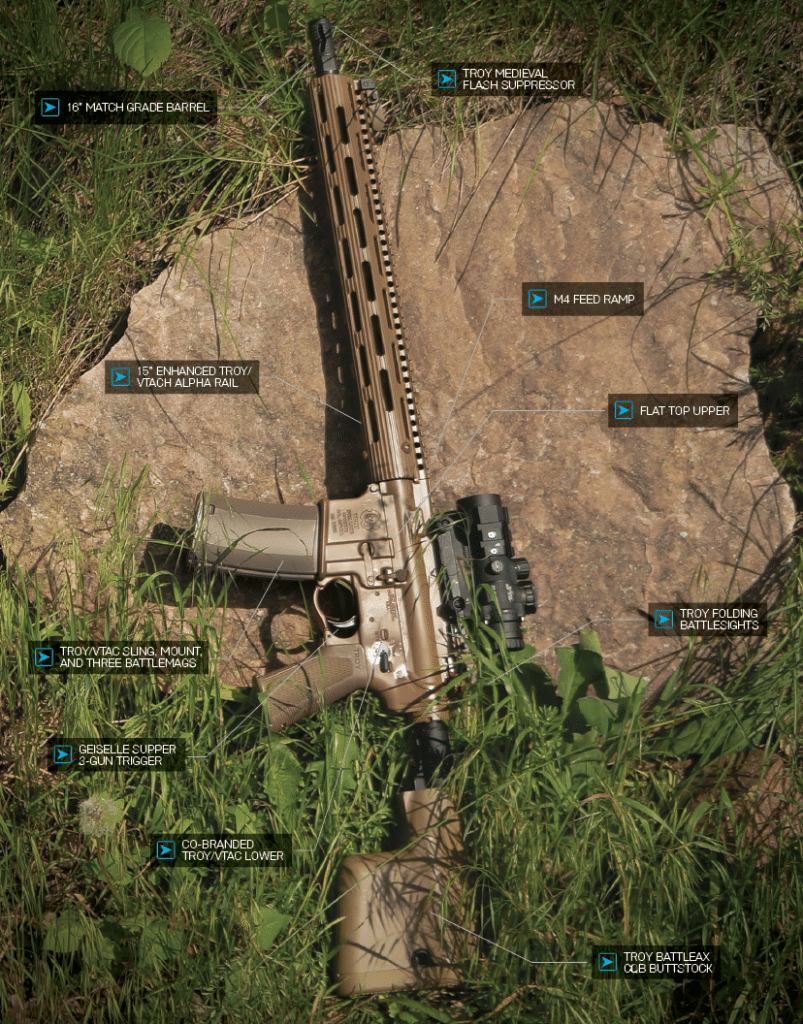 Unfortunately, there is a pretty serious lack of operational environments around Sioux Falls to test the Lamb Carbine in. Instead, we dropped the excellent Burris 332 Prismatic optic on the rifle, sighted it in for 100 yards, and took it to the Crimson Trace Midnight 3-Gun. If you’re not familiar with the Midnight 3-Gun match, it’s hosted every year in Bend, Ore. by Crimson Trace. The match features standard 3-Gun stages, but the big difference between Midnight 3-Gun and any regular match is that it is held between 11 p.m. and 3 a.m., and shot entirely in the dark. The environment in Bend, Ore. also provides an excellent place for testing the Lamb Carbine because it’s very dry, it’s very dusty, and it exposes the rifle to elements it wouldn’t see on a regular firing range. When using the rifle at Midnight 3-Gun match we selected ammo that was as generic as possible, in this case Freedom Munitions 55-grain full metal jacket. The magazines used were Troy BattleMags, and one Magpul 40-round P-Mag.

At the match, the rifle performed flawlessly. There were no malfunctions, no failures to feed, and accuracy was better than what the Midnight 3-Gun match calls for. Prior to leaving, accuracy had been tested on a static range where three-shot groups measured less than an inch in diameter at a hundred yards. The excellent trigger in the Lamb Carbine meant that precision shooting was very easy, as was rapid fire. The rifle is light, weighing only six pounds unloaded, meaning that it was easy to transition rapidly from target to target. While the rifle may be intended primarily for law-enforcement, self-defense, or military use, it would also serve excellently as a rifle for competition shooting. This is important because many shooters will never have the opportunity or ability to use their rifles in an actual combat environment. However, it is important for shooters to be able to test and train with their self-defense or law-enforcement gear in as realistic an environment as possible.

After the 3-Gun match the rifle was taken back to our top-secret testing facility, located in Dell Rapids just off of I-29. To test the rifle’s accuracy and reliability, we fired a five-shot group using Freedom Munitions 55-grain ammo. That group measured 0.94 inches at 100 yards from a cold bore. The scope used for the accuracy test was a Leupold 2-7X set on the highest magnification. Then we proceeded to load ten 30-round magazines to their full capacity and fire them from the rifle as fast as possible in an attempt to heat up the rifle and simulate conditions that could be encountered in an extended firefight. We recognize that the odds of one of our readers getting into an extended firefight are very small, but we wanted to test the rifle’s reliability under fairly extreme conditions. Through the extended firing the Troy rifle continued to perform well, with no failures to feed or extract. All of the empty cases were deposited in a relatively neat pile to the right and rear of the shooter.

Once the rapid-fire test was complete, another five-shot group was fired using the same ammo as before. The group was then measured at 0.99 inches. It seems that extended firing did not have an effect on the accuracy of the Lamb Carbine. 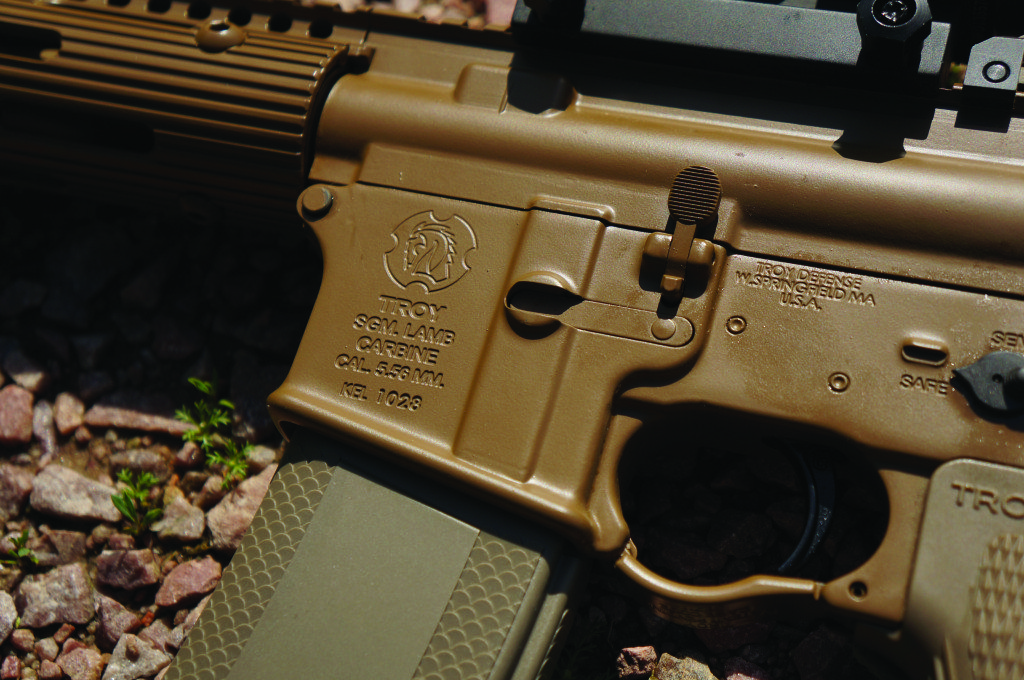 The Lamb Carbine comes with a lot of great features. Obviously the stock pistol grip, the trigger, the sites, the rail; all of these are great added features that make this a top-tier rifle. However, if we had to pick one feature that stood out above all the rest on this gun, it would be that delightfully nebulous feature: shootability. The Troy Lamb Carbine is best examined not by its individual features but rather as the sum of all its parts. Yes the stock is great, yes the trigger is great, the sights are excellent, and the gun even looks good. Individually, those features alone wouldn’t be enough to recommend the rifle. You can buy all of that stuff aftermarket and put it on your gun yourself. The Lamb Carbine is special because it’s put together by people who know what they’re doing. The result of good products and good assembly is a brilliant rifle. Because the rifle is so easy to shoot well, I would expect to be able to hand this rifle to an average shooter and see them make immediate gains, so long as the optic was of equal quality.

This may see needlessly nitpicky, however we have to mention at this point the price. It is considerable, With MSRP for the black version at $1,799, and the tan version we received coming in at a whopping $1,899. Of course, one must bear in mind with that price that this rifle is not some entry-level gun for people looking for their first AR 15. This is a high-end, semi-custom rifle that has been thoughtfully designed for serious shooters in both competition and tactical communities. But still, $1,800 is a lot of money to some people. In our opinion it’s worth it. 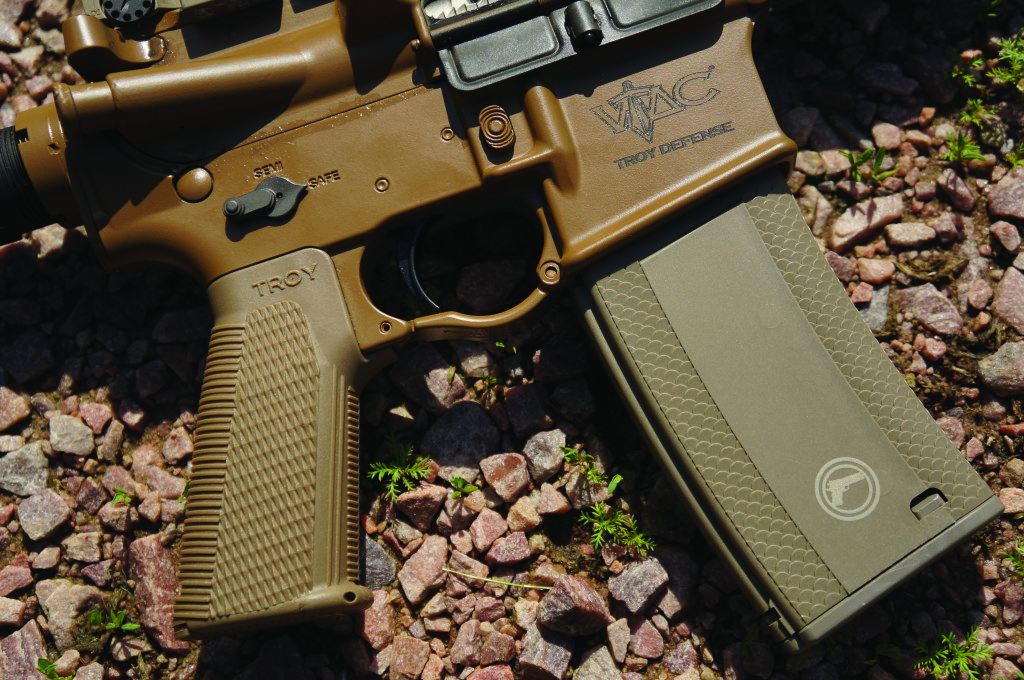 What are our final thoughts on the Lamb Carbine? It’s an excellent rifle that displays ideal attention to detail on the part of the builders, and is loaded with great features for shooters. Frequently when someone buys and AR-15 pattern rifle they have to go out and buy a pile of accessories to make the rifle fit them the way they wanted to. With the Troy Defense Lamb Carbine, no additional purchase of accessories is necessary. The gun is exactly how it needs to be right out of the box. Simply add glass and go to work. Whether that work is as a 3-Gun shooter, whacking coyotes, or defending your home, the Lamb Carbine is ready to fill that role.

Originally published in the December 2014 issue of GunUp the Magazine.