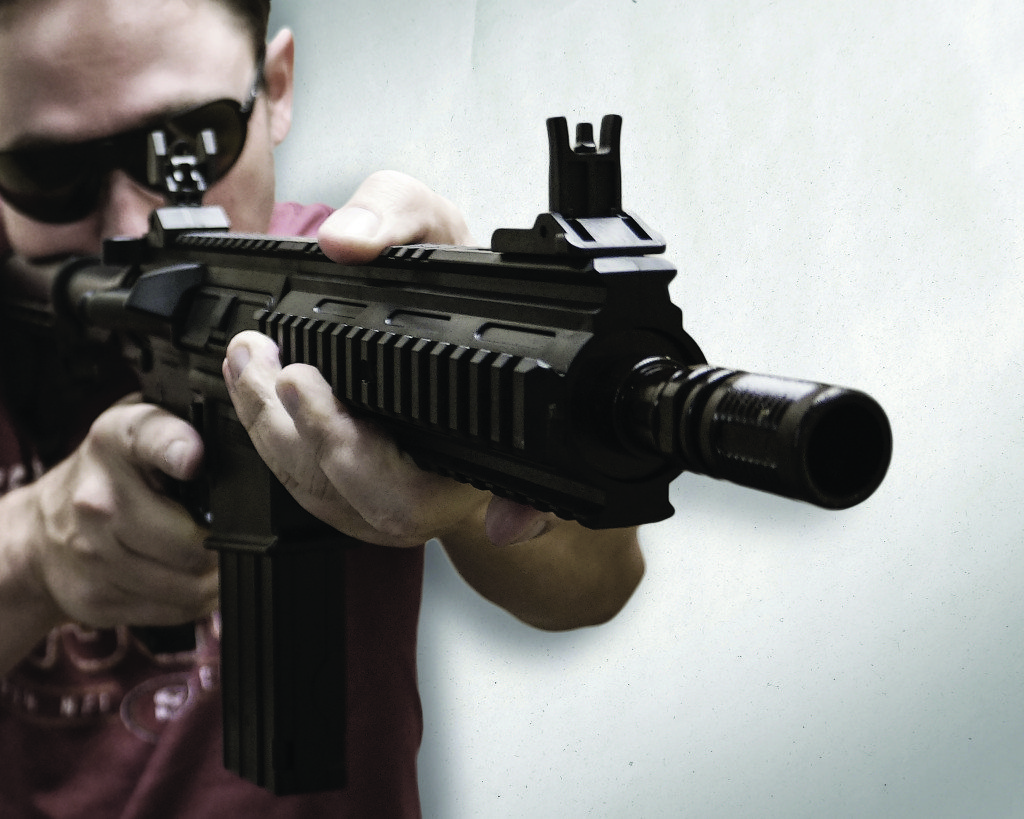 Hopefully, there was a point in your childhood that you’ll always remember: the moment when you got your first BB gun. For a lot of people that gun was a Daisy Red Ryder, for me it was a Crossman Pumpmaster. I remember a couple of years later when I upgraded to my first CO2 pellet gun, and it was amazing. As an adult I’d gotten away from pellet guns and BB guns because they weren’t serious training tools for serious shooters doing serious things. I thought that if it didn’t go bang it wasn’t fun. I was wrong. I didn’t know how wrong I was until I spent some time visiting the Umarex facility in Germany.

Umarex makes .22 LR guns for the U.S. and international market; they also make pellet, airsoft, and BB guns. After shooting several of their non-firearm products in Germany I was grinning from ear to ear, so when the opportunity presented itself to review their Steel Force I jumped at it. Who wouldn’t want to review a fully automatic BB gun that looks like an SBR M4 carbine?

The Steel Force is exactly as described above – a BB rifle that looks like an SBR M4 Carbine. Where the M4 puts its magazine the Steel Force holds two CO2 cartridges that drive the BBs to an impressive 430 feet per second. In case you’re wondering that means that the Steel Force would make a USPSA Power Factor of 2.19, assuming that the projectile weighs 5.1 grains.

Since its “magazine” area is actually holding the propellant, the actual magazine on the rifle is located under the handguard. The gun is loaded by sliding the front sight back, and then pouring BBs into the reservoir. The reservoir holds up to 300 BBs, but doesn’t feed them directly into the gun’s action. To feed 30 BBs into the action lock the bolt forward, then shake the gun up and down until the 30-round magazine fills up.

The manual of operation is very similar to an AR15. After loading the magazine and priming the CO2, pull the charging handle just as you would with an AR. Then look at the selector and decide if you want to shoot the gun on semi, or really have some fun with it. The Steel Force offers two shooting options: semi and burst. On semi-auto it acts just like a semi-automatic rifle, firing one round for every trigger pull. On burst, the fun begins. Each trigger pull spits out six BBs at 430 FPS, with a rewarding staccato “pop-pop-pop-pop-pop-pop” that sounds for all the world like a very angry nailgun running at a prodigious speed. 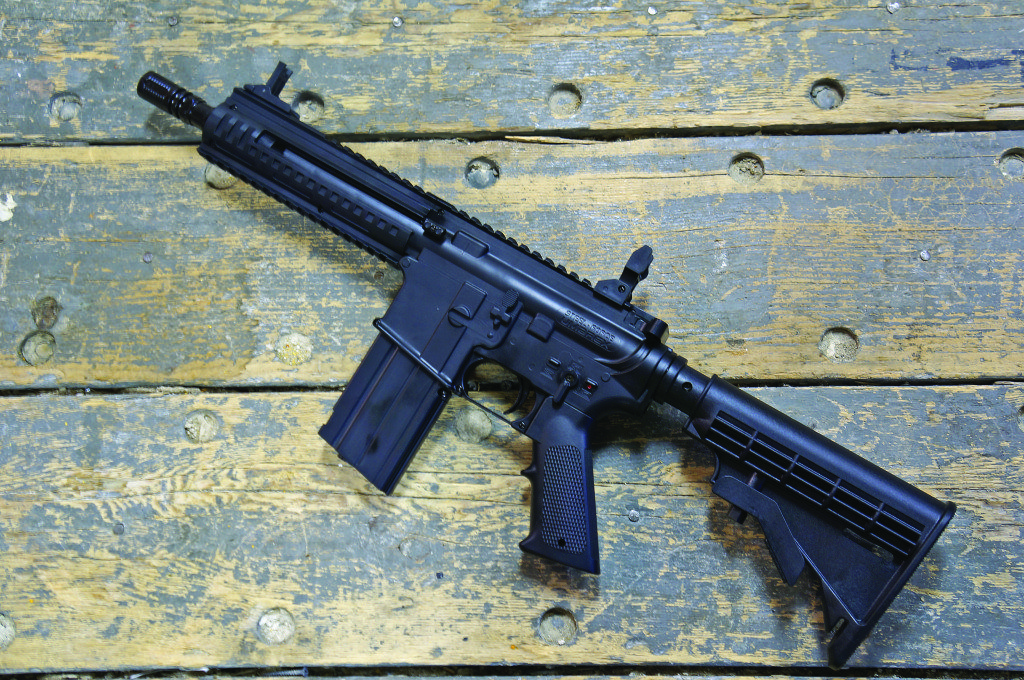 Equipped with flip-up style rifle sights, the Steel Force would shoot reasonably to point of aim within five to seven yards. We did not test the gun at longer ranges because the lack of a rifled barrel would have rendered that an exercise in frustration. You could also flip the sights down and simply paint the BBs into the target, watching their flight path and adjusting accordingly. In fact, if I had one major criticism of the Steel Force it would be that it’s not truly full auto. The burst mode is a tremendous amount of fun, but I can’t help but think that it would be even more fun if you could hold down the trigger and rip off and entire magazine in one long, hilarious blast of fun. Interestingly, as the gun ran low on CO2, that would happen – the mechanism that limits it to six shots apparently relies on gas pressure to operate, so as the pressure dropped the gun would go cyclic. That was a lot of fun, but the lowered BB velocity meant point of impact would shift.

Contrary to what you see in TV and movies, BB guns are not toys. A steel BB at 430 feet per second will absolutely penetrate bare skin and can cause serious injury, especially if shot at the face and eyes. Also a concern is your backstop, you want to use something that a steel BB won’t ricochet off and come back at you. Always wear eye protection when using a BB gun, and never point or fire a BB gun at another person or an animal. The Steel Force is designed as a target shooting gun, not a hunting BB gun, and would likely lack the power to deliver a clean kill on anything but the smallest of small game. If you want an airgun for hunting small game, consider instead one of the many break-barrel .177 caliber pellet guns that Umarex offers. Lead pellets from a rifled barrel offer better accuracy and terminal performance in squirrels and other small game than steel BBs from an unrifled gun. Because it looks like a real gun both up close and from a distance, the best safety practice for the Steel Force is to treat it exactly like a real gun.

One of the great advantages of BB guns is that they provide an excellent opportunity to teach children about gun handling and safety. With the Steel Force, you can start a young shooter off with an AR15 style weapon, and teach them the importance of safe gunhandling, the Four Rules, and even part of the AR15 manual of arms. Then from there, graduate them to a .22 LR M4 style made by Umarex’s sister company, Walther. The controls will be the same, although lacking the fun switch, but the training will transfer directly from airgun to .22. Of course after the .22, it’s time for a real .223 AR15, like the Colt Sporting Rifle. So the Steel Force can be used as a real training tool.

That progression doesn’t apply just to children as well. There are plenty of adults who are interested in firearms that probably should start off with a BB gun instead of a real gun. There are tremendous advantages to teaching with airguns – the greatest of which is that you can do it almost anywhere. A little careful backstop construction allowed us to shoot the Steel Force with absolute safety in our office. Safe airgun ranges can be set up in homes, garages, and basements; almost anywhere. A safe airgun backstop can be purchased online, or constructed from a cardboard box and a stack of old magazines or phonebooks. Sure, phonebooks might be in short supply these days, but everyone has a giant stack of old gun magazines sitting around. Just don’t use this magazine!

The simple, AR15-style operation of the Steel Force means it’s going to be easy for experienced shooters to understand and run safely; because of the ubiquity of the AR15 it will also make an excellent training platform for new shooters. 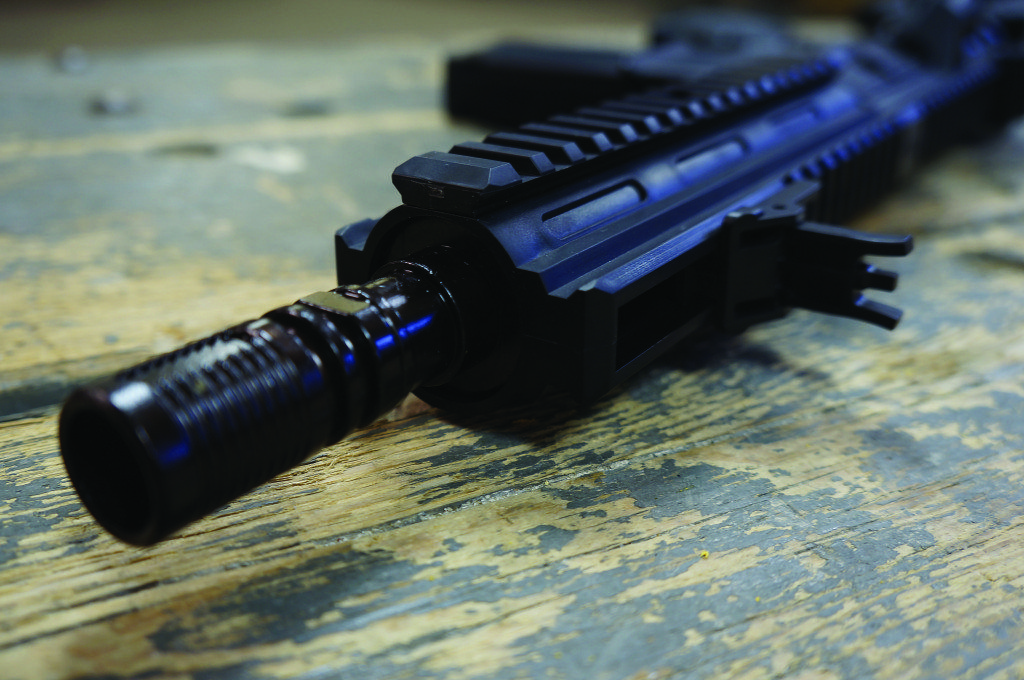 Even though you could use it as a marksmanship and gunhandling training tool, you don’t need that justification to do so. If you’re trying to a find a reason to justify spending $140 on a BB gun, try this: it’s ridiculously, amazingly fun. In our little office, productivity ground to an absolute halt the day the Steel Force showed up, with everyone taking turns shooting the gun. Even guys who’ve spent considerable amounts of trigger time on real machine guns would hand the Steel Force back with a big grin on their face, just enjoying the sheer fun of pulling the trigger and watching BBs sail into our backstop. That is probably the greatest recommendation I could possibly write of this gun: it’s fun. Shooting BB guns in general takes me, as a shooter, back to a simpler time when shooting wasn’t about serious defensive training, practicing for a major competition, or tuning up for a big hunt. It was just fun, and it was done for no other reason than to shoot. Shooting today is frequently treated as a means to an end, and not as an end in itself. The Umarex Steel Force, even for a brief moment in time, allows me to tap into that childlike sense of fun and amusement that comes from doing silly, fun things like carving a pumpkin with the Steel Force, or just shredding a paper target with it for no other reason than “we can.”

The general consensus in the office on the Steel Force is that we all wished the magazine held more than 30 rounds. Yes, the reservoir holds 300 rounds, but those 30 rounds in the magazine are gone in just five trigger pulls, leaving you smiling but wanting more. The tedium of shaking more rounds into the magazine interrupts the fun, and your inner 8-year-old child wants more BBs right now.

It also tends to work those two CO2 cartridges pretty hard; two cartridges would last us through most of the 300 rounds, but you could see a fall-off in velocity near the end. The gun uses CO2 instead of a larger tank to keep costs down, and we appreciate that. This goes back to the fact that our inner 8-year old was the one making the decisions about this gun.

You can use the Umarex Steel Force as a gun handling trainer for new shooters of any age. You can use it to have all kinds of fun shredding things in your basement and backyard. It is the perfect example of a big toy for big boys. Whether you’re 8 years old,or 31 years old (but 8 on the inside) you’ll love the Umarex Steel Force for the same reason any 8 year old loves anything: it’s big, silly fun.

By Caleb Giddings. Originally published in the December 2013 issue of GunUp the Magazine.