The 2nd Annual A Girl & A Gun Conference 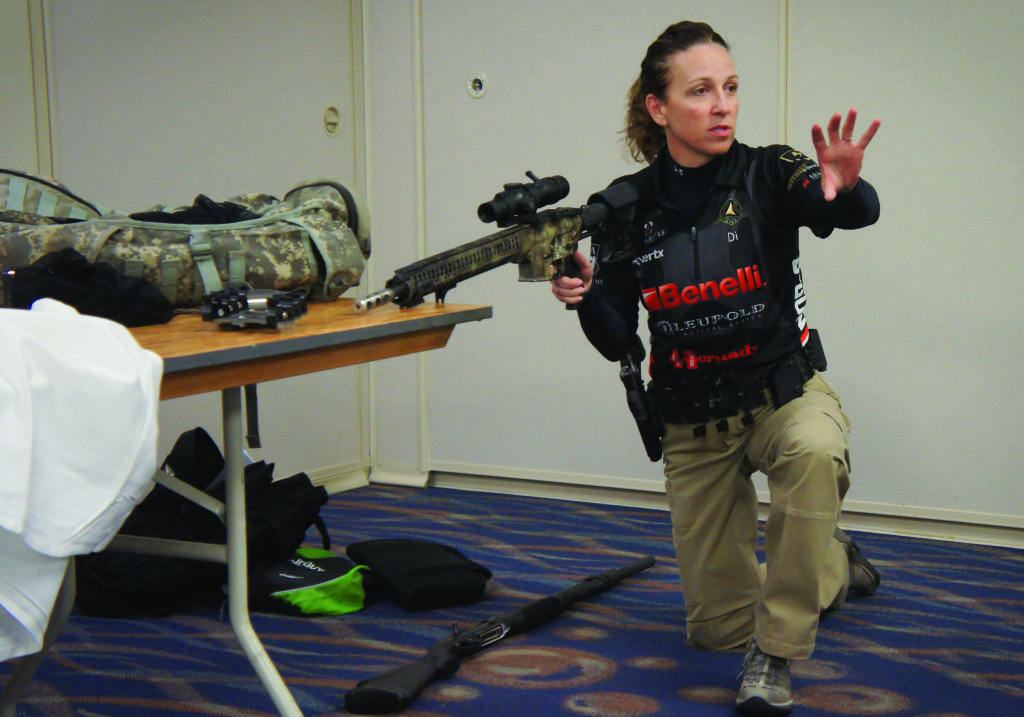 The word “conference” strikes fear into my heart – I imagine miles of walking and hours of meeting, practically crawling across the SHOT Show floor dreaming of the last day martini – so when I was first invited to attend the 2nd Annual A Girl & A Gun Conference I was hesitant. I was also wrong.

At the conference the shooters were divided up into four tracks, depending on their experience level:

The Purple Track was for shooters with physical limitations, such as arthritis, that might cause difficulty maneuvering around the range or shooting for an extended period of time.

The Blue Track was for shooters who have never taken a professional training course or who are otherwise new to shooting. IDPA Novice or Marksman, or D class USPSA shooters, found these classes useful in building a solid foundation.

The Green Track is for those who have attended a professional training course, visit the range a couple times a month, or have experience drawing from the holster. This was ideal for Marksman or SHarshooters IDPA shooters, or USPSA D or C class shooters.

The track the shooter registered for would affect what courses she could take. The courses varied in topic and difficulty so there truly was something for everyone. 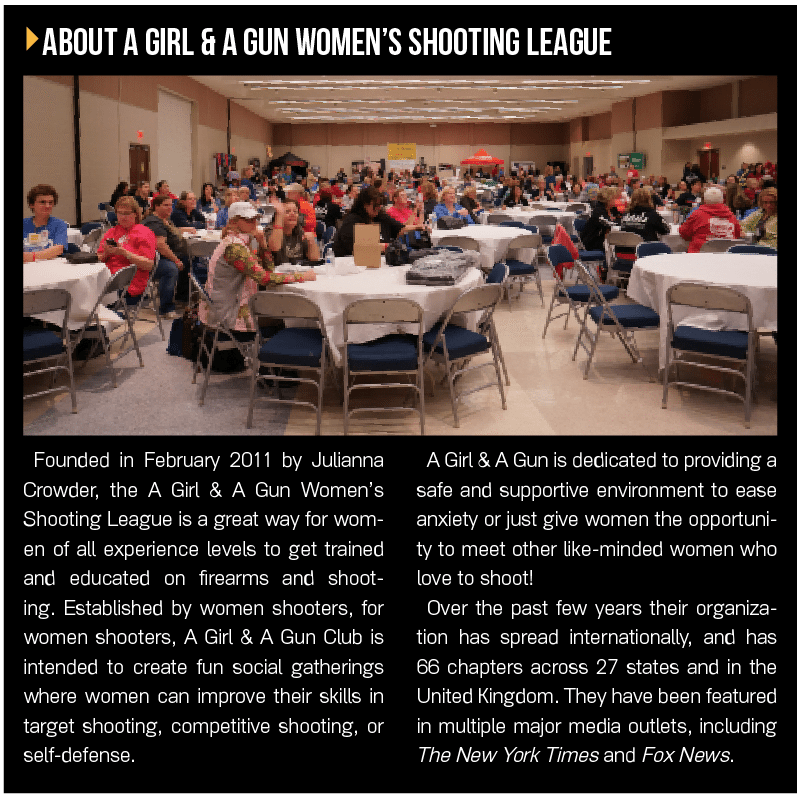 For those interested in simply learning more about how to train, Mike Hughes was hosting classes with his SIRT Pistols, while Tamara Shelley taught a course on multiple target drills.

For self-defense oriented shooters, Vic Redlund taught kubutan and knife defense classes, Lisa Looper gave tutorials on how to use her Flashbang Holsters, Marty Hayes discussed common issues brought in court regarding self-defense, Kathy Jackson taught a purse carry class and shooting from compromised positions, among many other talented instructors and informative classes.

For women who wanted to learn more about hunting, Rhonda Esakov taught hunters education courses, and there were many accuracy-based courses available to cover the shooting aspect.

For those who wanted to learn more about competition shooting, Dianna Liedorff was on hand teaching Intro to 3-Gun, Annette Evans was hosting an Intro to IDPA/USPSA, and Cindy “Shotglass” Love taught Intro to Cowboy Action. There were also more advanced clinics, such as shooting one handed, shooting in the dark, and competitive rifle.

There were even classes on subjects such as reloading, building an AR-15, living a healthier lifestyle, and more from other talented instructors such as Tom and Lynn Givens, Austin Davis, J.J. Schroeder, Vicki Kawelmacher, and Karl Rehn.

In short, there was a lot to learn, and there was no way to do it without having a good time. Every single person there was enthusiastic, excited, and ready to soak up any and all information they could find. It was a great environment, and one every gun owner should have the opportunity to be a part.

By the end of the week, I was so sold on the A Girl & A Gun Club Conference and what the league was doing I went home and started up a chapter here in Sioux Falls. 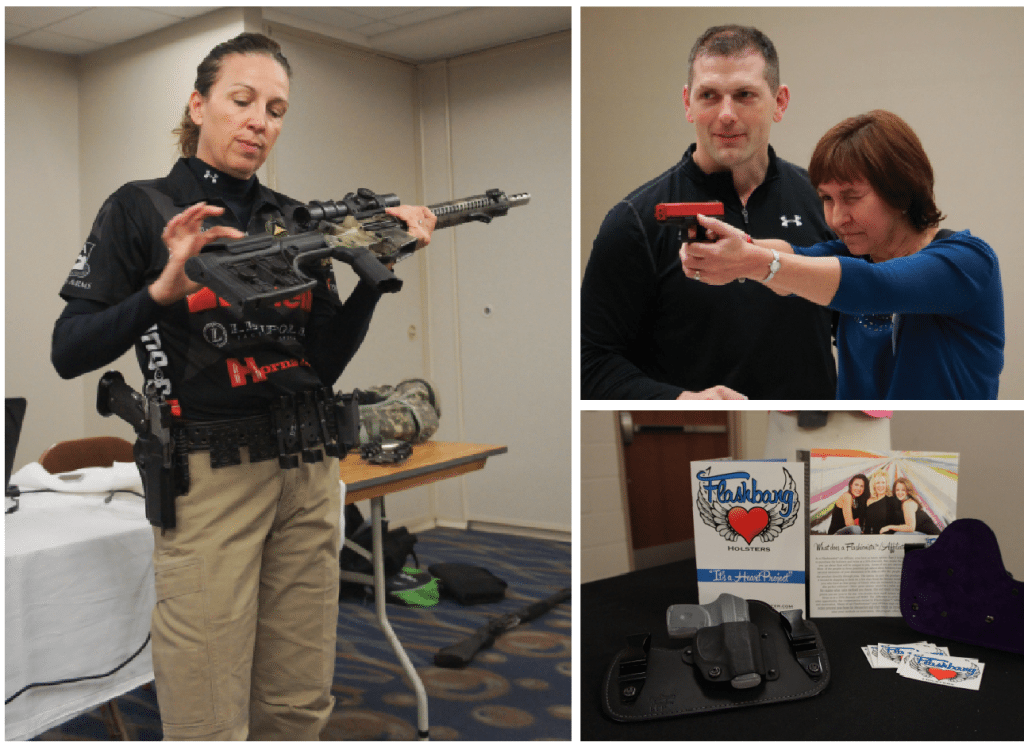 About A Girl & A Gun Women’s Shooting League

Founded in February 2011 by Julianna Crowder, the A Girl & A Gun Women’s Shooting League is a great way for women of all experience levels to get trained and educated on firearms and shooting. Established by women shooters, for women shooters, A Girl & A Gun Club is intended to create fun social gatherings where women can improve their skills in target shooting, competitive shooting, or self-defense.

A Girl & A Gun is dedicated to providing a safe and supportive environment to ease anxiety or just give women the opportunity to meet other like-minded women who love to shoot!

Over the past few years their organization has spread internationally, and has 66 chapters across 27 states and in the United Kingdom. They have been featured in multiple major media outlets, including The New York Times and Fox News.

From the desk of Julianna Crowder:

You might be well armed, but are you well trained?

My trip to the 2014 SHOT Show was very productive in regards to networking with colleagues and making new relationships within the industry. A topic of conversation that I had with several companies and industry professionals was the role of women are playing, the influence they have, the trend on their spending habits, and what things have not changed for many of us. There have been plenty of blogs and articles about products targeted at the female demographic, spending habits, and been plenty of coverage of women’s clubs taking shape as a small local group of gals to national organizations reinforcing that women are not to be ignored, especially the power they have with the consumer dollar. There are more well armed women than ever before, but they are not all well trained.

While we are seeing a significant rise in the number of women who are purchasing firearms, we are not seeing an equivalent increase the number of women taking training courses. This can also be said for the firearms community in general, there are more gun owners now than in years past, and certainly more firearms instructors than ever before, but there doesn’t seem to be a significant increase of new students, male or female.

Meaningful training is often mistaken as a “basic gun safety course” or a concealed carry certification. Don’t get me wrong; these are very important starting blocks, they serve, for many, as an awaking and introduction to the responsibilities of firearms ownership. A confusing layer for those that do seek more training is the barrage of instructors, methodologies, and techniques to choose from. It is important when looking for your next trainer or mentor that you check them out and trust in what they plan to teach you. Where are their credentials from? Ideally you want to see a well-rounded influence of nationally recognized instructors and training academies on their “about me” webpage.

The next thing you need to evaluate is what you want to gain from taking a training class. Are you looking to understand self-defense? Do you need to get your foundational marksmanship skills solid? Are you looking to learn the rules of the game competitive shooting and how to win? Maybe you want to learn how to survive the zombie apocalypse. Whatever your goals are, the instructor you choose should be in alignment for that specific skill set. Taking a “tactical ninja class” most likely won’t help you do better at the next local match, and taking a class on how to get your game face on might not save your life when confronted by an attacker. Understanding that there are different skills for different uses of the gun is important and will help you on this path of education. No matter what your goal is with firearms education, you want to learn to safely handle the gun and to improve your speed and accuracy.

Where to get started? Well certainly look in your community for instructors that are teaching topics that meet your goals. Remember to check their credentials and do your homework on them. Then look outside your fish bowl for additional opportunities.

By Shelley Rae. Originally published in the June 2014 issue of GunUp the Magazine.