The Bullet Breakdown: Your Guide to Understanding Ammunition 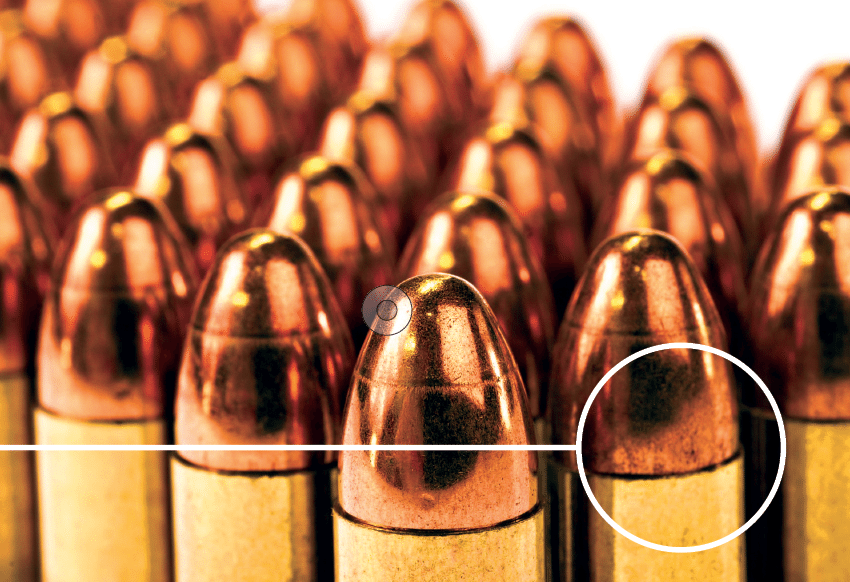 Ammunition is arguably the most critical component of your shooting experience. Owning all the guns in the world doesn’t do a person any good unless there is ammo for those guns. Experienced shooters spend a considerable amount of time shopping for ammo based on characteristics that they find desirable; however for new shooters it can be a daunting task to understand all the nomenclature and terminology around ammo.

Ammunition can be used to describe a wide array of items, from the huge shells and powder bags used to load WWII naval cannons, loose powder and lead balls for muskets, or modern cartridges. While a discussion of different types of naval guns and their ammo would be interesting, it’s beyond the scope of this article which will focus solely on cartridge ammunition designed for modern firearms.

In the past, cartridges (both rifle and pistol) have been colloquially referred to as “shells,” that terminology has mostly fallen out of vogue except for shotgun shells which are almost always referred to as such. Additionally, some cartridges contain additional items: shot cups for shotgun shells, wadding, sabots, multiple projectile rounds, and countless other variations. To avoid bogging down on minutiae, we’ll focus entirely on handgun and rifle cartridges. 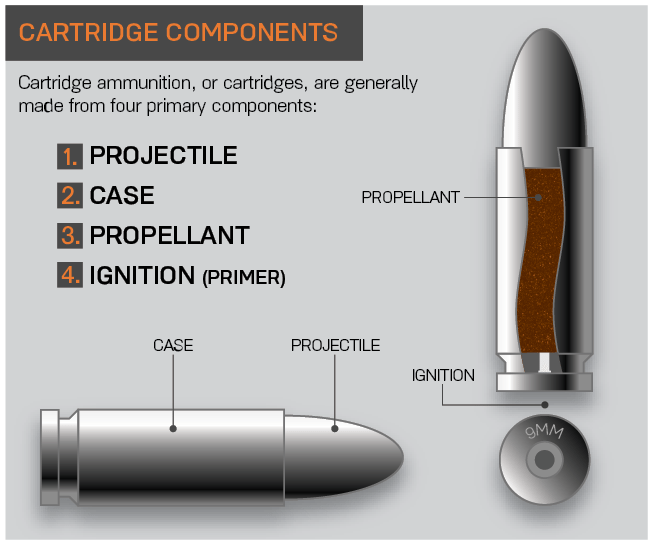 Projectiles
The bullet from a cartridge is used to create the majority of the data we use to characterize cartridges, most notably caliber. Caliber generally refers to the diameter of the base of bullet measured edge to edge. It’s not an exact naming convention however. For example, most .38 Special rounds actually measure 0.357 inches in true diameter, and a “.45 caliber” bullet could be as small as .451 inches or as large as .455 inches depending on the origin.

Once cartridges are sorted into calibers, the bullet type is used to further differentiate them. The two major types of bullets are based on their construction: all lead or jacketed lead. An all lead bullet is about as close to a musket ball as you can get with modern firearms; a shaped chunk of lead with no external material.

Jacketed bullets enclose the lead portion of the projectile with metal “jacket” material, usually made from a copper based alloy. The two most common jacket types are the full metal jacket, or FMJ which encloses the majority of the bullet but leaves the lead base of the bullet exposed; and total metal jacket bullets which fully enclose the bullet, including the base. Jacketed bullets were invented to deal with the problem of excess lead deposits in the barrel caused by the higher velocities associated with the invention of smokeless gun powder.

Lead remains the most common bullet material on the market for now; however there are several companies that produce bullets made entirely from a copper alloy. Other types of bullet construction include frangible bullets. A frangible bullet is made from copper and tin particles then sintered to form a solid projectile that breaks up on impact with a hand surface such as a steel plate or brick wall. Frangible bullets are often used in training to avoid hazardous ricochets.

Now that bullets are divided into two large categories, they are further broken down in to groups based on projectile shape. The most common jacketed bullets are commonly referred to as “ball” or “FMJ” ammo. Full metal jacket ball ammo is a lead core bullet encased in the aforementioned jacket material with no exposed lead in the frontal area of the bullet. The analogous all lead bullet is referred to as a lead round nose; its shape is similar to the ball ammo but lacks the copper alloy jacket.

The next most common projectile shape is the hollow-point. A hollow-point bullet has a cavity in the frontal section of the projectile; this cavity is designed to react with the soft tissue and cause the bullet’s impact area to expand to a diameter greater than the base of the bullet. Hollow-point bullets can be found in all lead projectiles; for many years the standard issue cartridge for the FBI was a .38 Special semi-wadcutter hollow-point bullet that weighed 158 grains. The lack of a jacket on the now famous “FBI load” meant that bullet would generally expand to a considerable diameter.

The current industry standard for hollow-point bullets is the modern jacketed hollow-point. Unlike the standard ball ammo, a jacketed hollow-point (JHP) usually has the base of the bullet enclosed by the jacket and some exposed lead in either the hollow-point cavity or around the nose of the cavity. The jacket material helps the bullet retain more of its weight after it’s expanded, giving it better penetration. This is especially important in defensive handgun rounds, which are limited to the single wounding mechanism of crushing tissue as they pass through it.

Even though ball and JHP are the two types of bullets most frequently found; there are plenty of other types out there as well. The aforementioned frangible ammo is available in both JHP and ball configurations. Wadcutters use a flat frontal area to cut an easily definable hole in a paper target, and are intended for use in competition shooting. 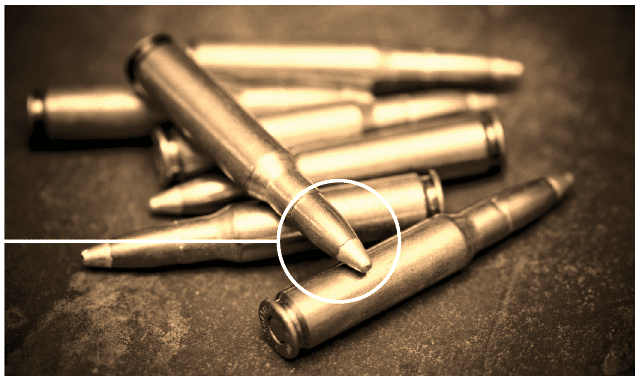 Case
The case is the most visible component of a cartridge, and the part that holds the components together. Cartridge ammunition revolutionized firearms development much like smokeless powder would years later. Firearms chambered for metallic cartridges could be reloaded quicker and were more weather resistant than guns that proceeded them.

Metallic cases help different calibers from one another. Cases are usually characterized by their shape, the type of rim, and the material they’re made out of.

The case of a metallic cartridge is usually made of brass; other common materials are aluminum and mild steel. Brass cases are generally re-usable through a process known as reloading (different from the act of reloading the gun – ed). Reloading spent cases after cleaning, resizing allows shooters to increase their range time at significant cost savings from buying factory ammo. Aluminum cases and steel cases are not generally reloadable, but provide a cost savings advantage to shooters. Aluminum and steel are cheaper for manufacturers to purchase, and those savings are passed on to the consumer in the purchase price of steel and aluminum cased ammo.

A cases’ shape refers to the amount of taper in the case walls or whether or not the case has a bottleneck shape. Bottleneck cases start with a larger diameter than necessary to fit the bullet, and are then necked down to accept a smaller projectile than the internal diameter of the case. An example of this is the .357 Sig, which starts a .40 S&W case, and then the open end of the case is reduced to properly fit a 9mm bullet. Tapered cartridges have a very gradual amount of taper to them, but lack a bottleneck. Both the bottleneck and taper are intended to aid feeding reliability in semi-automatic firearms.

Cases can be further differentiated by the type of rim. Cartridges designed for revolvers will generally feature a prominent rim around the base of the case; the rim is greater than the diameter of the case itself and sets on the cylinder face. When the ejection rod is pushed, the revolver’s star grabs the case rim and manually ejects them. Many historical rifle cartridges were rimmed as well; the .303 British and 7.62x54R are great examples of cartridges designed for battle rifles that featured a rim.

Most semi-automatic rifle and pistol ammunition are either rimless or semi-rimmed. A rimless case has a groove at the base of the case designed to accept the extractor claw on pistols and rifles. The extractor claw slides into this groove during the normal action of the firearm and then during the cycle of action post-firing uses the groove to begin the process of removing the spent casing from the chamber.

The most common propellant for modern firearms is smokeless powder; virtually all factory ammunition is loaded with a type of smokeless gunpowder. We only mention propellant in this article because it’s historically significant. Prior to the invention of smokeless powder, metallic cartridge firearms were loaded with black powder, which is a mixture of sulfur, charcoal, and potassium nitrate. Black powder produced considerable smoke and fouling in firearms, and required large volumes of powder to drive bullets to significant velocities. Many names of metallic cartridges from the black powder era include the number of grains of black powder the cartridge was designed to be loaded with, such as .45-70, .44-40 and .32-20.

The invention of smokeless powder allowed bullets to be driven at significantly higher velocities than black powder was capable of, but a side effect of the velocity gains was a massive increase in lead deposits in the barrel. This lead to the invention of the copper jacket, as noted previously.

The last differentiation between types of cartridges is their ignition type. There are two ways in which the propellant in a cartridge can be ignited – rimfire ignition or centerfire ignition. In rimfire guns, the priming compound is placed in the rim of the cartridge, which when struck by the firing pin detonates and ignites the propellant. The most common rimfire cartridge is the lowly .22 Long Rifle; however other rimfire rounds are in common use today as well, such as the .22 Winchester Magnum Rimfire, or .22 Magnum for short. A quick trip through the history of firearms will reveal some very interesting rimfire rounds in calibers much larger than .22. The early Henry rifles, ancestor of the legendary Winchester lever-action rifles were chambered for a .44 caliber rimfire cartridge.

Related Stories: With enough ammo, ANYTHING can be cut in half

The other type of ignition is centerfire – centerfire cartridges use a replaceable primer cap that is inserted into a pocket in the base of case. The primer is struck by the firing pin, and ignites the propellant. Centerfire ignition is more reliable and positive than rimfire ignition, which is a part of why all serious self-defense and military rifles and handguns use centerfire ignition.

Metallic cartridges haven’t changed much since the early 20th century. The 9mm Luger was introduced in 1902, and with the exception of hollow-point bullet technology hasn’t changed in over 100 years. But even with technology this stable, knowing what each component of your cartridges does will increase your knowledge when selecting rounds for hunting, self-defense, or target practice.

By Caleb Giddings. Originally published in the May 2013 issue of GunUp the Magazine.