A few summers ago, action movie fans huddled around YouTube to watch the second trailer for the new James Bond movie, SPECTRE. I felt a little sorry for Dave Bautista (Guardians of the Galaxy, Riddick, and of course the WWE) when his reveal as SPECTRE operative and tough guy Mr. Hinx was overshadowed by his pistol, as audiences got a brief view of what appeared to be a double-barreled 1911.

“What the heck was that?!” people cried.

I knew what it was. 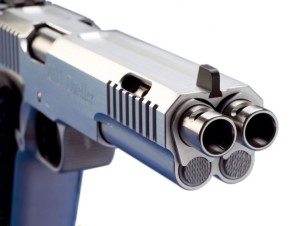 Italian gun writer and engineering mastro Nicola Bandini wanted to mark the 1911’s centennial with something unique and attention grabbing, and designed a fully functional double-barreled semi-automatic pistol that used not only the 1911’s single-link short recoil operating system but also a surprising number of 1911 compatible parts. Built by Arsenal Firearms of Italy (AFI) and imported in the USA exclusively by International Firearm Corporation (IFC), the AF2011 Dueller is absolutely the most unique and fantastic Bond villain gunever, and one you can buy today. Check out the current listings for the AF2011 Dueller on GunBroker.com.

From the beginning, the Bond movie franchise has made an effort to feature futuristic gadgets and exotic weaponry. The Armalite AR-10 and AR-7 got their movie debuts in Dr. No and From Russia With Love, and the rare Walther WA-2000 bullpup magnum sniper rifle was first seen in The Living Daylights. Not to mention Scaramanga’s Golden Gun or the space laser carbines in Moonraker, ordinary, plebian firearm props simply will not do, and the AF2011 Dueller is an outstanding continuation of that tradition.

The AF2011 Dueller wasn’t the first double-barreled automatic pistol in existence, but is the first — and only — one to be designed with production in mind. In the mid-90s, Swiss gunsmith Vivian Mueller chopped and welded up a pair of SIG 210s and created a custom (gold plated, naturally) one-off hand built piece as a showcase of his gunsmithing talents. But AFI went one further and designed the AF2011 Dueller as a series production piece as a demonstration of their engineering and manufacturing wizardry. As incredible as it seems, you can head down to your local dealer and buy a double-barreled semi-automatic pistol, complete with warranty and factory support just as easily as you could pick up a conventional 1911.

What a time to be alive.

Of course it’s not cheap, but it’s still a bargain. Even the top of the line Dueller Prismatic model retails for less than what you’d pay for two semi-custom 1911s, and the base model (as if a double-barrel 1911 could be referred to as “base”, but let’s run with it) AF-2011 is actually quite competitive with a high-end custom 1911. You could easily spend more on a mid-grade European over/under shotgun or Barrett’s (no relation, sadly) mighty M82 .50 caliber rifle, and yet still not have a piece as limited and instantly collectable as the AF-2011. It’s available in a variety of calibers and finishes, and accessories like alternate grip panels and spare magazines are in stock and available on IFC’s website. Even more impressive are the fully equipped sets with exotic leather (your choice of ostrich, alligator, and brown or black water buffalo hides) carrying cases, belts, fitted holsters and magazine pouches.

The AF2011 Dueller Prismatic as seen in the movie differs from the base model in that while it shares the base AF2011’s operating mechanism and 1911 based heritage, the exterior slide profile and detailing are completely reimagined by Bandini to reflect his idea of what the pistol ought to look like. With its longer, sculpted slide, it looks like nothing else in the world. The Prismatic Dueller also offers an extended beavertail grip safety and and compensated barrels with integral muzzle brakes..

I’m sure someone, somewhere is complaining that the AF2011 isn’t practical. To which I reply: Shut it.

The kind of soulless killjoy that would find fault with this gun would also gripe that a twin-turbo big block muscle car gets lousy gas mileage, or a supermodel girlfriend is kind of high maintenance, or foie gras is fattening. Go back to your beige minivan and black plastic 9mm, we’re not talking practical here. We’re talking AWESOME. Some things are done to push the limits of what is possible, to not be satisfied with what’s merely practical. 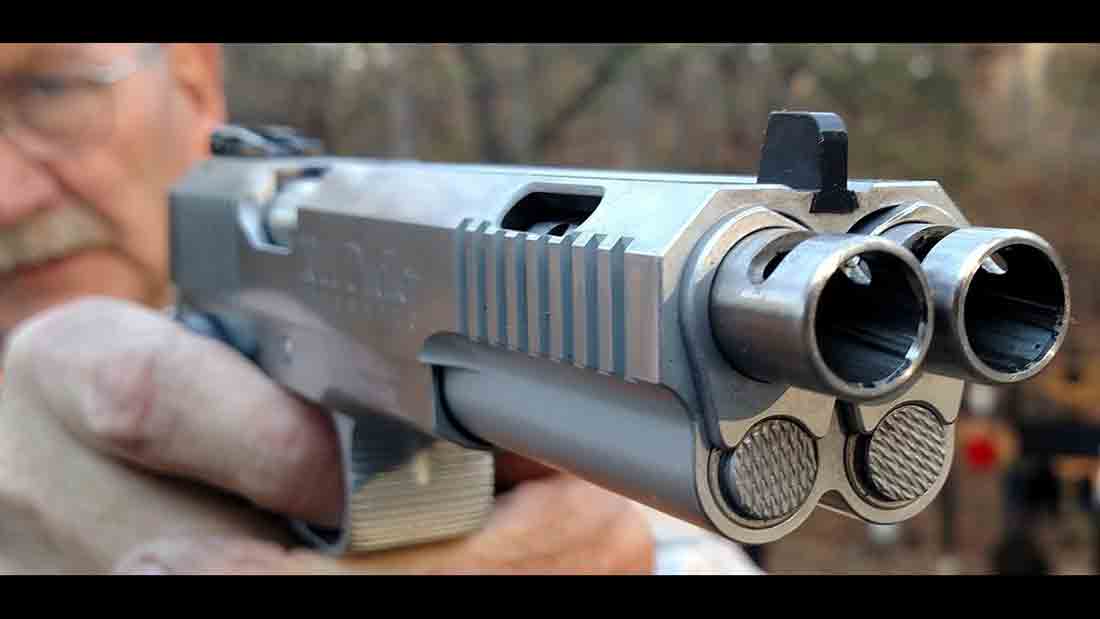 The AF2011 is certainly not going to be anyone’s first choice as a daily carry piece or a competition gun or a cop’s sidearm. It’s more than that. The AF2011 is a tangible declaration of engineering and manufacturing prowess, not only of a single talented designer, but of an entire company. No doubt SPECTRE will only be the AF2011’s first movie appearance, and it will be a treat to see its movie career unfold, but the real entertainment will be to see what IFC brings to our shores next.

Good things are afoot, as IFC has already begun receiving shipments of the highly anticipated Arsenal Strike One, a unique polymer framed 9mm semi-automatic pistol with an advanced inline locking block that delivers a remarkably low bore axis and promises reduced recoil and muzzle rise resulting in super fast splits (although not as fast as a 0.0 split from both barrels of the AF2011).

The shooting community could use a little more awesome to balance out all the seriousness, and IFC is importing it.

Related Stories: The Guns of Taken and Taken 2

“This is my BOOM STICK!” This classic movie line embodies much of what people see in shotguns. Few firearms conjure up as much folklore and cliché as the shotgun. It has been a long-time staple of those serious about home defense, but it shares an equal-sized crowd of uncertain or fearful onlookers. They are loud,...

Dear Santa…ok, maybe that might be a bit much, but I would like to officially lodge a complaint with the Bureau of Christmas gifts choice and distribution (BOCGC&D). Like everyone, I am genuinely thankful for gifts received at Christmas. But deep inside where your self-focused 5-year-old self still resides, you secretly wish you had gotten...

Wilson Combat is now offering the Wilson Combat-Beretta Brigadier Tactical 92 with a Vertec-grip frame conversion. This conversion, performed by Wilson Combat, reduces the size of the frame to the significantly smaller Beretta Vertec size which is ideal for shooters with smaller hands or who prefer the straighter, more 1911 style grip. Related Videos: Wilson Combat’s...