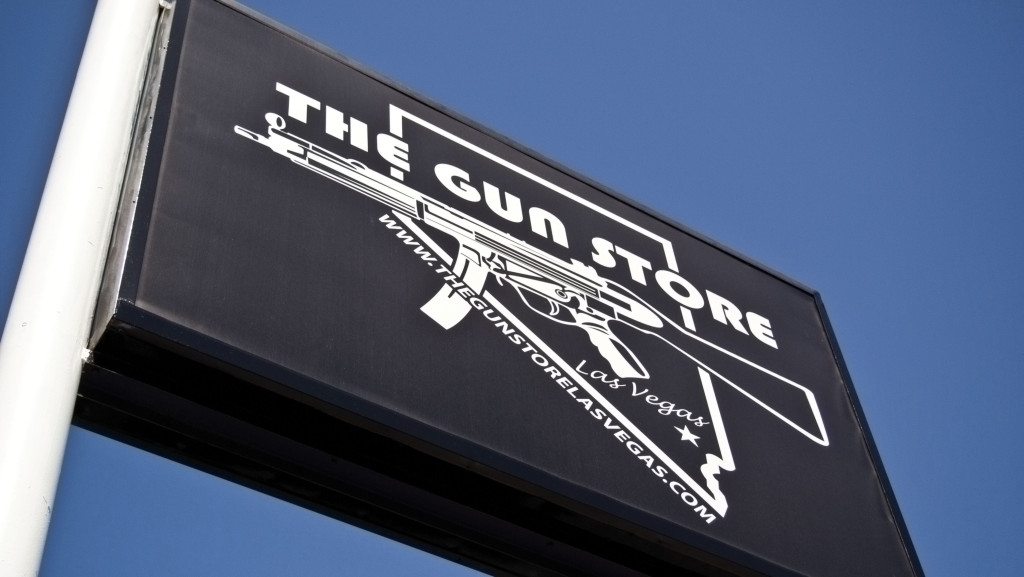 Every year the GunUp crew flies into Las Vegas for the Shooting, Hunting and Outdoor Trade Show. Because of the location of the show, in the Sands Convention Center at the Venetian, we spend a lot of time on the strip, dining and drinking with friends and colleagues from around the nation when we aren’t on the Show floor. There’s more to Vegas than just the strip though, and gun culture within the city is alive and well.

The Gun Store Las Vegas was first started in 1988 by owner Bob Irwin, who also runs “Fired Up with Bob Irwin,” a radio show discussing guns, politics and self-defense. Since then a series of other ranges catering to different clientele, but offering the same services of machine gun rentals and firearms training classes, have popped up across Sin City.

The Gun Store sets itself apart from its competition by focusing on family. There are no scantily clad women here, but instead they have developed a friendly and welcoming environment for all ages and walks of life.

One thing that this particular shop is known for is providing free classes for those wishing to fulfill Nevada’s concealed carry permit requirements. Nevada is a “Shall Issue” state, and those who are interested in getting a permit must go through classroom training and qualify with a handgun. (Once they qualify with a handgun they may carry any.) The only thing students are required to pay for when attending the classes and qualification at the Gun Store is their qualification ammunition. 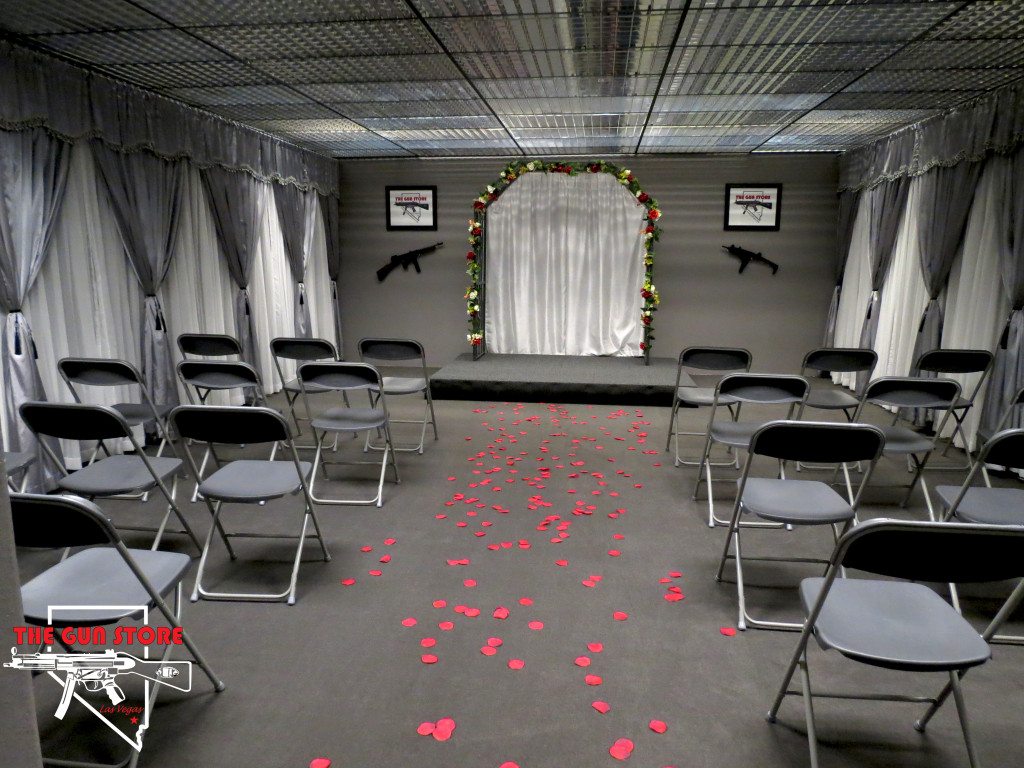 On top of the free permit classes, the Gun Store also offers a variety of classes in everything from basic firearms safety to personal safety and security defensive tactics. They tailor their classes to specific audiences, providing a more comfortable environment for many new shooters. Among their classes interested parties will find ladies only and children only classes.

Along with their indoor range, the Gun Store Las Vegas has outdoor range offerings that provide a unique experience for those who are interested in shooting larger caliber firearms. Different packages include the change to include the famous Desert Eagle, Barrett .50 caliber, or even a M203 Grenade Launcher.

One important emphasis at the Gun Store Las Vegas is safety. Each group gets their own private range officer – which means if someone is handling a gun, there is a range officers with them, either teaching or observing, depending on the user’s displayed skill level. For those who have spent time in a public range, this is a great comfort, as having mandatory one-on-one safety officers means a great increase in safety over many ranges.

Another interesting health measure that they have taken at the Gun Store is limiting ammunition to lead-free frangible. This is more practical for this tourist-oriented range to do than it would be for a regular public range, since they supply all ammunition used in their range. Lead is a major health concern at indoor ranges, especially for employees or regular customers. Many ranges provide D-Leading soap and other options for removing lead that customers may pick up at the range. By removing lead from the equation entirely, the Gun Store has created a healthier environment for both their customers and their employees. 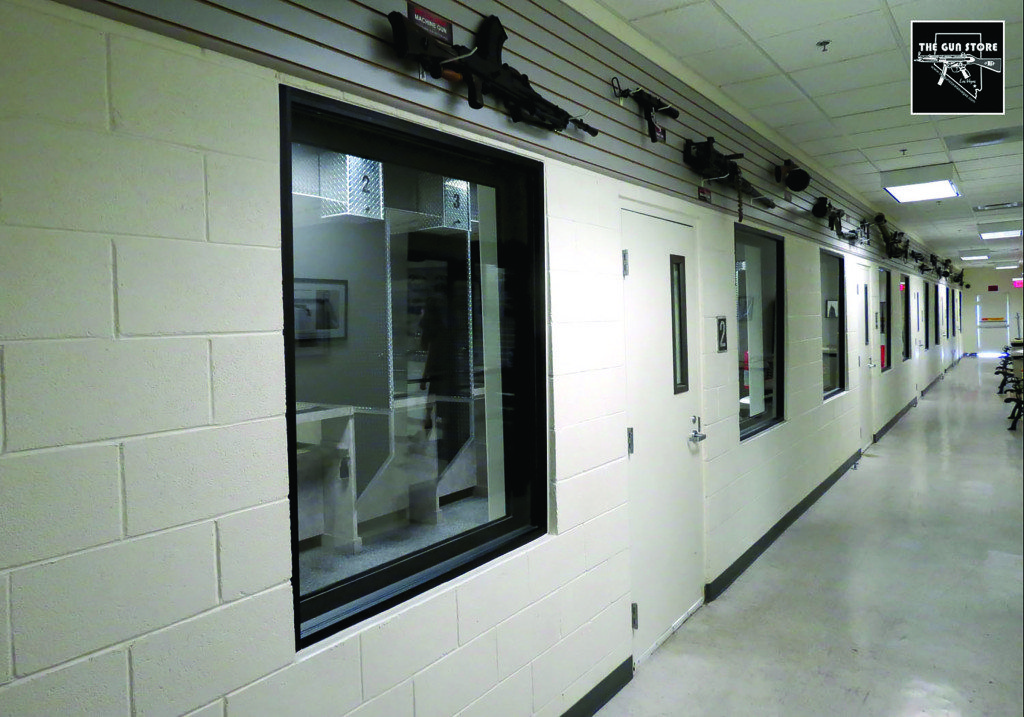 Approaching the Gun Store Las Vegas is like approaching almost any other range. Outside a booth is set up where visitors can check in, select packages, and pay. Afterwards, they enter the range booth area where they pick up firearms, ammunition, eye protection, ear protection and their range officer.

The hallway that contains the ranges is covered in movie and war paraphernalia that the range has collected. There are a lot of interesting guns lining the walls, and guests should take the time to stop and look on their way in or out of the range.

The range itself is divided into several different rooms, each with several lanes. The wedding chapel is down at the far end, and then there are the regular ranges, then the VIP ranges. The VIP ranges have several couches, and refrigerators filled with non-alcoholic cold beverages for guests to enjoy while they’re off the line.

Once shooters have been escorted to whichever range they are shooting on, the range instructor will walk them through the firearms and then they will be able to put rounds down range under the supervision of their range officer.

For many, the fun times don’t stop there. The Gun Store Las Vegas does actually have a gun store attached, and within there is a lot more than guns for sale. Shoppers can purchase paraphernalia from the Gun Store itself, a great thing to have for the many excited tourists who come through the shop. There are also a lot of fun clothing and accessories items that those interested can purchase on their way out.

For many, the Gun Store Las Vegas is a fun and entertaining tourist attraction. It serves as a way for those who have never taken the time or had the chance to shoot the guns of their dreams to fire some rounds through firearms from their favorite movies, video games or even from their favorite time period. For dedicated enthusiasts, it provides an opportunity to play with NFA-restricted firearms that otherwise might not be available.

Originally published in the March 2014 issue of GunUp the Magazine.