The Guns of Archer

If you haven’t caught any of Adam Reed’s FX Network animated spy spoof Archer yet, you may be forgiven for wonder why we’re covering a cartoon this month. One of the latest in a long running line of American satirical cartoons that stretch arguably back to The Flintstones, Archer deviates slightly from the formula established by The Simpsons, Futurama, South Park, Family Guy, The Venture Bros., and numerous other short lived FX and Cartoon Network Adult Swim series by aiming more for realistic, comic book-style artwork over abstraction, and this eye for detail extends to the weaponry in the series. While not approaching the hyper-realistic levels seen in Japanese cartoons, Archer puts in remarkable effort into the selection and depiction of the guns used that make it rewarding for the fan of shooter cinema.

Even if you’re not sitting down for the gunplay, Archer is an absolute delight. It’s rated TV-MA and earns it every episode with over the top “they-went-there!” antics. Reed lets absolutely nothing get in the way of telling a good joke wrapped around surprisingly deep stories. This even extends to the series’ time setting, which is hilariously ambiguous and allows the writers to set the absurd mundane banalities of modern life like cell phones, political correctness and mandatory sensitivity training, the Human Resources and Information Technology departments against the titanic struggle of the Cold War. The lead character, superbly self-absorbed thirty-something super spy Sterling Mallory Archer (Codename: Duchess) (voiced by H Jon Benjamin), embodies the triumph of the whim over duty. To Archer, the super-spy career is more about the lavish lifestyle, endless supply of women of negotiable morals and cutting edge gadgetry than service to his country. When his supervisor and mother Malory Archer (Jessica Walter) complains about his lack of discretion by noting “Most secret agents don’t tell every harlot from here to Hanoi that they are secret agents!” Archer simply asks: “Then why be one?”

This also extends to the agency the characters all work for, the International Secret Intelligence Service (ISIS), is some kind of quasi-private company to which American counter-intelligence work is contracted to, as if we had replaced the CIA with Blackwater or something. This leads to more than a few situations where the perpetually inept ISIS is pitched against rival intelligence agencies.

As an unapologetic homage to the 1960’s film James Bond in style and appearance, Duchess’ sidearm throughout the series is of course a .32 Automatic Walther PPK pistol. Developed in the 1930s from the Walther PP, the PPK shares the innovative safety features of its larger brother, like the loaded chamber indicator, firing pin block and traditional double action with a safety and decocker, but is cut down in size to a 3.3-inch barrel and a shorter grip with a one round smaller magazine. The PPK quickly became the standout in a crowded field of small pocket pistols, offering a level of quality and reliability that its competitors found hard to match. It was catapulted to even greater fame and sales after featuring as James Bond’s pistol in the long running movie series.

Archer’s PPK begins the series as a stylized sketch light on the details, but as the series progresses, the animators bestow more and more detail on it until by Season 3, even the extractor, serial number and ring hammer are represented well.

Archer’s professional and personal foil and on-and-off love interest, fellow ISIS agent Lana Kane (Aisha Tyler) is most often seen with a pair of Intratec TEC-9 submachine guns. A development of the Swedish Interdynamic MP-9 submachine gun, the TEC-9 was modified to fire in semi-automatic only and deleted the shoulder stock and foregrip to be importable as a handgun. The TEC-9 was made from a polymer frame and a number of steel stampings for the frame and barrel shroud. While bulky and somewhat unreliable, the aggressive appearance and large capacity magazines made for a fun range toy and the TEC-9 found fame in television and movies as a prop gun for the bad guys.

Kane carriers her TEC-9s in a somewhat fanciful double shoulder rig, but the large and crude pistols are a good match not only to her brusque manner but also her gigantic hands.

When the script calls for an older foreign looking pistol, Archer turns to the C96 “Broomhandle” Mauser, specifically the detachable box magazine, select fire variant dubbed the M712. In the mad scramble of the late 1890s to produce a self-loading alternative pistol to the revolver, Mauser’s C96 was one of the earliest designs to find commercial favor and win military contracts. An almost alien design to modern eyes used to seeing nothing but Browning pattern tilt-barrel pistols, the C96 featured a fixed box magazine reloadable with stripper clips, a fixed barrel and a recoil operated bolt instead of a reciprocating slide. In 1927, Spanish arms manufacturers began making C96 clones with detachable magazines that could be operated in selective fire mode, and Mauser followed up with their own Schnellfeuer (“Fast Fire”) a few years later. Intended for export, the M712 found its way all over the globe and individual copies floated around the underground arms market for decades.

M712s show up in all seasons, particularly in the hands of Malory Archer as she fends off enemy agents while nursing the just-born Sterling. Mad Scientist and general tech support Dr. Kreiger (Lucky Yates) carries one in Season Four, and various foreign assassins are seen with them throughout the series.

Archer’s recurring professional rival Barry Dillon (Dave Willis) is quite partial to the Israeli Military Industries Desert Eagle. A large, gas-operated semi-automatic, the Desert Eagle was an attempt to marry the powerful cartridges of large framed revolvers with the single action trigger and box magazine of automatic pistols. Initially available in .357 Magnum, the design also accommodated the legendary .44 Remington Magnum and eventually the gigantic .50 Action Express designed specifically for the gun. The Desert Eagle never found widespread success except in movies, where its intimidating size and implied power made it a natural star of screen.

Dillon displays an unusual affection for his gun and is often seen polishing and cleaning it, reading Desert Eagle Magazine and eventually in season 2, holding a conversation with it like Inspector Hammer talking to his S&W 629 in ABC’s 1986 TV series Sledge Hammer!.

It’s not all pistols and buzzguns at ISIS, though. The go-to sniper rifle is generally H&K’s PSG-1, a heavily modified and accurized version of the G3 7.62 NATO battle rifle. Featuring a highly adjustable buttstock, palm-rest pistol grip, a light and adjustable trigger and free floated barrel, the PSG-1 was claimed to shoot up to the intrinsic accuracy of the ammunition used in it. While expensive, the PSG-1 lived up to the advertising and found service in SWAT and military units across the globe. 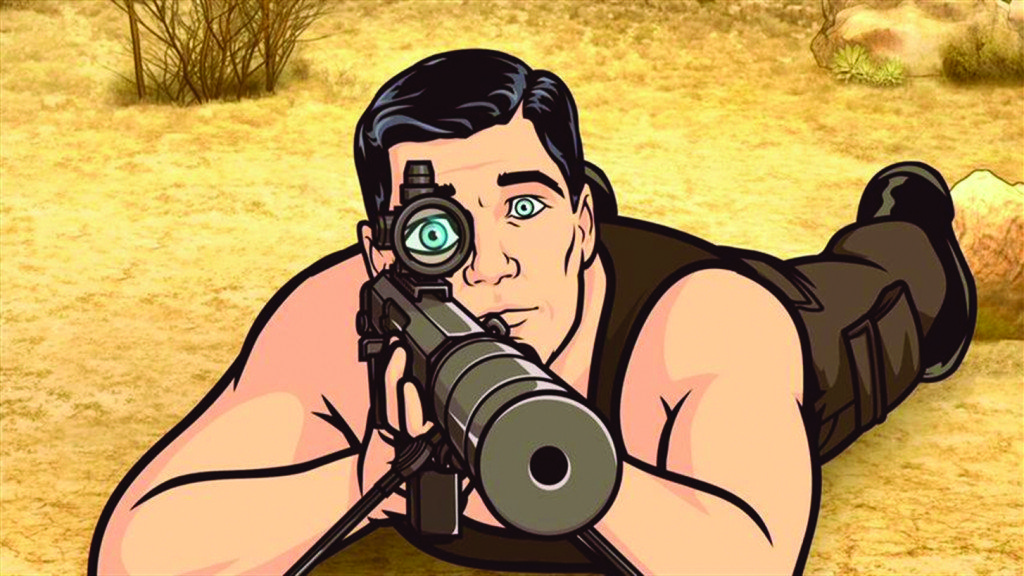 Another German sniper rifle appears in Season 2 as Archer uses a Walther WA 2000 to take out some security guards during his cancer patient avenging rampage. An exotic looking bullpup rifle, the WA 2000 was a no-expenses-spared effort to design the ultimate counter-terrorist rifle. Chambered in .300 Winchester Magnum, the design was exceedingly accurate and compact (yet still tipping the scales at over 16 pounds unloaded), it proved to be too expensive and complex compared to its competitors and was ultimately shelved after less than 200 examples were built.

ISIS occasionally faces off against Soviet agents, who are mostly equipped with Tokarev TT-33 pistols and PPSh-41 submachine guns. Chambered in 7.62x25mm Tokarev, the TT-33 largely resembles an enlarged Browning 1903, using the M1911’s tilt-barrel recoil system, but also adding additional locking lugs to the barrel and simplifying some details to ease production. While wartime demands meant the design never fully displaced the M1895 Nagant revolver, the TT-33 was a rugged and popular pistol that gave good service under harsh conditions.

The PPSh-41 was rushed into production at the dawn of the Second World War when it’s predecessor the PPD-40 proved to be too costly and time consuming to produce in the numbers required. A simple open-bolt blowback design, the PPSh-41 combined sheet metal stampings with a wooden stock and either a 35-round box magazine or a 71-round drum with a blazing fast 1000 RPM rate of fire. The PPSh-41 saw service through the entire war and continued to be supplied to Soviet client states for decades after.

Another common sight for all seasons of Archer is the German MP40. Much like the Russian PPSh-41, the German MP40 was a wartime expedient design that was pushed into production and displaced more complex and expensive predecessors. The MP40 was also a fairly simple open-bolt blowback submachine gun that relied heavily on metal stampings and used a folding metal stock. The MP40 remained in production until the end of the war, were adopted into various police and military units of several nations and continue to appear in service in various trouble spots across the world to this day.

For Season 5, Reed took the series down a different path and abandoned the spy thriller routine to take a riff on the glamorous crime television shows and movies of the 80s and 90s, and Archer Vice was born. As one of the characters quipped, it resembled “The A-Team meets Scarface”, although ISIS always finds a way to complicate matters. Given the task of selling an entire ton of cocaine, the gang encounters drug gangs, South American cartels, participates in a bloody counter-revolution, throws a coup and discovers new levels of depravity. Season 5 is an opportunity to see some ‘80s action movie gun prop staples, such as M16A1s, AK-47s and 74s, the M60, and the H&K MP5, among others.

Under siege from the Japanese mob and fresh out of guns and ammunition, Cheryl Tunt’s (Judy Greer) family gun cabinet is raided out of desperation. As the antique arms are handed out, sharp eyed nerds will spot a Lee Enfield No 4Mk1, an M1 Garand, a Civil War era Springfield 1861 and even a French Charleville Musket.

Archer was wisely renewed by FX for a sixth and seventh season late last year and Reed returned the series to its spy movie roots, but after the rise of the Islamic State of Iraq and Syria, Reed abandoned the ISIS acronym and instead folded the previously rogue spies back into the CIA. As long as the ratings remain high and the jokes keep coming, Archer is in a zone of little danger of being cancelled. Fans of shooter TV that are looking for some lighter fare than our usual diet of cop and military dramas and action flicks are well advised to tune in.

By Peter Barrett. Originally published in the March 2015 issue of GunUp the Magazine.

At the Range – The Basics of Suppressors