The Guns of Die Hard 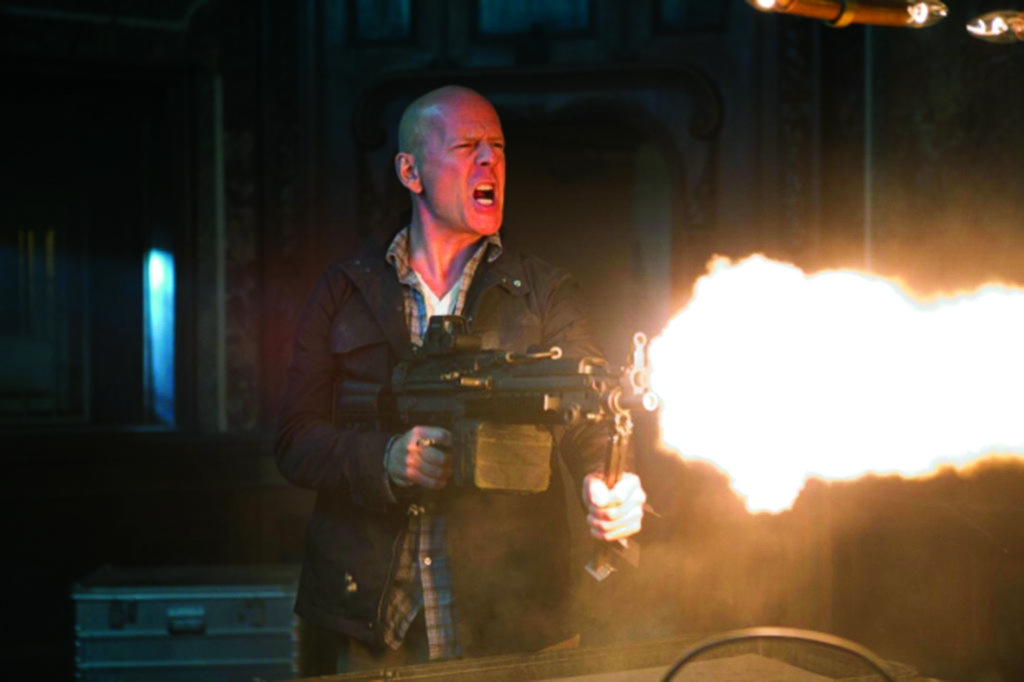 With the 2013 release of the fifth movie, A Good Day to Die Hard, and the upcoming 25th birthday of the Die Hard franchise it’s a good time to take a look back at the firearms used in the iconic action series, and how John McClane’s taste has changed over time.

The original Die Hard movie saw John McClane carrying a Beretta 92F, specifically modified for Bruce Willis with an extended magazine release and slide release. The popular 9mm pistol, a version of the M9 that replaced the legendary M1911A1 as the standard sidearm of the United States Armed Forces in 1985, is still in production today in a variety of models and calibers.

In Die Hard 2 and Die Hard with a Vengeance, McClane upgrades to the 92FS, which was released in 1989, one year after the original Die Hard movie came out. The differences between the 92F and the 92FS are mostly internal. The 92FS had an enlarged hammer pin head, preventing the slide from flying back in the case of breakage, developed in response to a problem reported during U.S. Military testing. The Model 92FS also upgraded to gloss plastic grip panels.

In the fourth movie, Live Free or Die Hard, viewers find that McClane has adopted a SIG-Sauer P220R in .45ACP. During the movie, the gun is taken during a confrontation with cyber-terrorist Mai Linh. Once McClane runs Linh down with his SUV the SIG is not seen again. Later, McClane takes a Beretta PX4 from henchman Russo and carries it throughout the rest of the movie. The PX4 is a polymer frame double action/single action handgun that uses a short-recoil, rotating-barrel and is a radical departure from the Beretta 92F and 92FS seen in the first movies.

In the fifth movie, 2013-release A Good Day to Die Hard, John McClane has no identifiable primary sidearm. However, his son Jack McClane carries a two-tone SIG-Sauer P228R. The 9mm P228 was introduced in 1988 and used by the U.S. Secret Service until it was replaced by the P229 in .357 Sig. Now, the P228 is no longer in prodocution, having been completely supplanted by the P229.

Throughout the Die Hard series, viewers may notice an ongoing pattern of Heckler & Koch submachine guns, every single movie uses at least one of the popular submachine gun models.

In the first movie, Heckler & Koch 94s are frequently seen. The guns have been chopped and convereted to resemble the Heckler & Koch MP4A3, but lack a paddle magazine release, lugged barrel and push pin set.

Stuart’s men are also seen carrying an MP5K. The “K” stands for “Kurtz,” the German word for “Short.” The MP5K was designed with a shorter barrel for close-quarter battle and does not have a shoulder stock. The bolt and receiver were also shortened at the rear for this mode giving it a higher rate of fire. The civilian version of the MP5K, the SP89, lacks the vertical fore-grip and paddle magazine release seen on the movie’s MP5K.

An interesting point is that, in the movie, many of the MP5s are equipped with “jungle style” magazines, or two magazines taped together. For each, one magazine is filled with live ammunition and another is filled with blank ammunition. Throughout the movie, the magazines are switched out interchangeably with no adapations. In reality, this is impossible as auto-loading firearms must be adapted in order to cycle with blank rounds. Blank adapters restrict the barrel down to anywhere from 50% to 75% of the barrel interior, and could blow up a firearm if a live round was fired through them.

The Die Hard series is not scant on heavy machine guns, large artillery and otherwise awesome things that cause big explosions.

The first movie, Die Hard, plays host to two different models of M60 Machine Gun. One of these was the original M60, adopted officially by the United State Army in the late 1950s, since then the design has undergone some small changes and and has been produced by different manufacturers. In Die Hard, a full-sized M60 is seen held by the gunner on a Huey helicopter transporting FBI Special Agents Johnson and Johnson. An M60E3, a lighter variant of the M60 which was fielded in the late 1980s, was fired by Alexander at Sgt. Al Powell’s police car, and is also used to shoot out spotlights during the attempted SWAT raid on the Nakatomi building.

In Die Hard 2, a Browning M2HB heavy machine gun makes a cameo appearance when Baker and Thompson show up at the church and are knocking on the door. Here, the custodian is watching a news broadcast of Esperanza’s extradiction, when the Browning is seen on the TV. The M2 was developed in the early 1900s by none other than John Moses Browning himself at the request of General Pershing, the commander of US expeditionary corps in Europe. The water-cooled, belt-fed gun was officially adopted in 1923. In 1930, the Army adopted a modified version of the gun, with a basic receiver that had been redesigned by Dr. Samuel G. Green. The new receiver could work with either water-cooled and air-cooled barrels. Since the original air-cooled barrels were too light to provide sustained fire, heavier barrels were introduced for ground units, and thus the M2HB as seen in Die Hard 2 came into existence.

While Die Hard with a Vengeance sees the reapparance of the iconic Browning M60, the alternate ending plays host to another piece of large artillery. In the alternate ending, John McClane has a Chinese rocket launcher, which markings that indicate which side is the firing side have been removed from. McClane then tracks Simon down in a bar in Europe and forces him to play “McClane Says” and point the launcher in what he believes to be the safe direction. This launcher was custom-made out of iron for the production, and was made hollow on the inside in order to place the charge that simulated the launcher’s firing.

A pair of General Dynamics GAU-22/A are found in Live Free or Die Hard, erronously mounted on a Lockheed Martin F-35B jet which, in reality, would only be outfitted with one external gunpod. At the time the film was made, information on the location of the mounts may have been difficult to find, forcing filmmakers to assume the F-35 used twin external pods. The GAU/22-A is the latest application of the GAU-12/U. It’s a four barrel version designed specifically to be mounted on the F-35 lightening. The major difference between the GAU-22/A and the GAU-12/U is the use of a four barrel system where the 12/U has five barrels, using four-barrels is puprorted to reduce weight and imporve accuracy.

A Good Day to Die Hard also features an FN M249 SAW Paratrooper with an EoTech sight mounted on top of it. McClane uses the SAW when the safehouse is attached, and another is used by various Russian goons. The light machine gun, designed to servie in the role “Squad Automatic Weapon,” is a mobile suppressive-fire platform that is light enough and small enough to be single-man transportable. FN’s SAW platform, the Minimi, was first developed in the late 1970s and early 1980s, and began mass production in 1982 in Belgium. Around the same time, the US Armed foces adopted the platform as the M249 SAW. The Paratrooper model is shorter than the standard model, with a barrel length of around 13.7” versus the standard 18.3” barrel.

The Gast Gun was first produced in 1916, designed by Karl Gast of Vorwerk und Companie of Barmen. What made the firearm so notable was it’s fast firing rate of 1,600 rounds per minute. The gun was very similar, in principle, to an automatic machine gun that had been patented by Bethel Burton in Great Britain in March of 1886. The unique mechanism that powered the Gast guns combined the firearm’s two barrels in a manner that utilized the recoil of the of the first barrel to load and charge the second round. The ammunition was fed through two 180-round vertically-mounted cylindrical drums that sat on either side of the gun.

Designed for ease of maintenance, the Gast gun could be field stripped in about a minute. It was also relatively light, weighing in at just 60 pounds, and considered rugged and ideal for mounting to aircraft. After Gast first demonstrated the gun to the German military in 1917, they immediately ordered 3,000 guns, the first 100 of which were to be delivered by the 1st of June, 1918.

Despite the firearm’s the success, the Gast gun not widely used, and thus remained a secret until after the First World War. The Allied Control Commission first discovered the gun in 1921 when they stumbled on a secret cache in the Konigsberg fortress. The United States Army later tested the gun, and found it to be durable and reliable but not worth the expense required to replace their machine guns.

By Peter Barrett. Originally published in the April 2013 issue of GunUp the Magazine.