The Guns of Strike Back

If you haven’t heard of Strike Back, don’t despair. It only airs on Cinemax in the U.S., which means that not everyone has access to it. That’s too bad, because it’s a show that has been tailor-made for gun nuts.

The central premise of the show has the two main characters, Sergeant Damien Scott and Sergeant Michael Stonebridge, flying around the world to interesting locations, meeting interesting people, and then shooting them in the face with interesting guns. As members of the fictional branch of British MI6 called Section 20, Scott and Stonebridge are tasked with saving the world from the threats ordinary people will never know about. To accomplish their mission they’ve used a wide variety of guns. In the U.S., three seasons of Strike Back have aired; there is a prequel season featuring different characters that has aired in the U.K. We’ll focus on the three seasons that have aired in the U.S.

The three U.S. seasons have the good guys using a mix of handguns that are precisely what you’d expect from an elite counterterrorism unit: SIG SAUER P226s, GLOCK 17s, and Beretta 92-series guns. In a particularly memorable scene from Season 2, Stonebridge empties his GLOCK 17 at an approaching vehicle, performs a textbook slide-lock reload, and resumes firing. It was the sort of gun-handling that makes fans of the shooting sports happy.

Strike Back is largely filmed in South Africa, which means that some very interesting guns which aren’t common in U.S. prop shops will show up in the series. One example of this is the Star Model B carried by villain Leatherby, played by Dougray Scott in Season 3. The Model B used to be a popular film stand-in for the GI 1911. It is chambered in 9mm, which made it more reliable when using blanks than .45 ACP guns were. Model B pistols have appeared in films and television for years, but since the 1990s have largely been replaced with proper .45 ACP 1911s thanks to improvements in blank firing technology and CGI. Perhaps the most famous appearance of a Model B in recent history is in Pulp Fiction, where Samuel Jackson’s character uses a Model B as his primary weapon.

Where Strike Back truly shines are with long guns. Handguns in the show are treated how they should be – as back-up weapons to your long gun, whether it’s a submachine gun or a rifle.

Strike Back features just about every flavor of MP5 you can imagine in their three U.S. seasons; Season 3 features the very interesting MP5K “Reverse Stretch.” This is not a factory produced MP5K variant, but is created by combining an MP5A3/A5 receiver and stock with the foregrip and barrel of an MP5K. The result is a compact weapon with all the handling advantages of an MP5K, but that also features a usable stock for a more stable firing platform.

Strike Back has also featured the usual suspects of SMGs in the hands of all the characters, from Uzis to Sten guns and everything in between. Interestingly, the Armscor BXP, a 9×19 subgun that superficially resembles a MAC-10 has appeared in every season.

The BXP was originally designed by Armscor, and is still in production by Truvelo Armoury in South Africa to this day. This is likely the reason for its repeated appearance in Strike Back, again owing to the show’s primary production location in South Africa. The BXP is not particularly notable, however it does enjoy a relatively high cyclic rate when compared to other subguns, firing around 1000 rounds per minute. Another interesting feature of the full-auto BXP variants is that the fire selector is built into the trigger. Partially depressing the trigger for about half its total travel will fire one round, while pressing it all the way to the rear will fire on full auto. While an interesting engineering feat, this seems like a less-than-practical design element for a combat weapon. 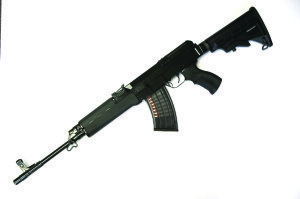 Now we get to the good stuff as it were, because Strike Back is heavy on rifles. This is as it should be, because in modern times the rifle has supplanted the SMG as the “cool-guy” counter-terrorism weapon. So while Strike Back will use SMGs, they do when it’s appropriate and makes sense for the narrative. For the most part, the characters carry rifles.

In the first U.S. season, called Project Dawn, the heroes use a variety of rifles. On official missions and raids, they either use the standard M4A1 carbine, or in three episodes the VZ-58 Tactical. They also use a considerable number of pick-up rifles, as Project Dawn focused more on Section 20’s covert role than door kicking. Pick-up rifles during Project Dawn include the expected number of AK variants: AK47, AKMS, Zastava M70, and even several Norinco Type 56s. Another common pick-up gun, and one of the most memorable, is the Vektor R5 that Scott picks up in Episode 5. This rifle has been modified with an Aimpoint and a magnifier for the optic, as well as a forward quad rail.

The second U.S. season, called Vengeance, kicks off with a bounty of HK rifles. During a running gun battle in Mogadishu, the heroes are equipped with HK G3A4 rifles in 7.62 NATO. These rifles have been modified from factory configuration to be more suitable for close quarters battle, and also feature tactical accessories, including lights and lasers. Each rifle in the Mogadishu fight is also topped with an ACOG scope, which is presumably calibrated for .308 instead of the usual 5.56.

Again we find the assortment of AK clones and genuine articles, as well as the unsurprising use of M4A1 carbines by the Section 20 personnel during the first half of the season. Much more interesting however, is the appearance of the Vektor CR-21 bullpup rifle. This rifle is based on the Vektor R4 action, itself a variant of the famous Galil rifle. The CR-21 only appears in one episode, but its odd, bulbous, almost alien appearance makes it stand out.

Currently airing on Cinemax is U.S. Season 3, called Shadow Warfare. Shadow Warfare features what are, to our estimation, the coolest rifles yet in Strike Back. Yes, the bad guys are still saddled with their boring AKs and clones, but in Shadow Warfare, Scott and Stonebridge have switched to VZ-58 variants as their primary weapons. Not just any, but a compact short-barreled version chambered in 5.56 NATO that uses an adaptor to accept STANAG magazines. These little SBR rifles appear in episodes one through four of Shadow Warfare.

Later in the season, the teams switch up to full size VZ-58 rifles, which appear to be chambered in 7.62×39. These are used in multiple raids, and are equipped with modern tactical accessories such as Aimpoint optics, suppressors, and in one case, an M4-style collapsible stock. Shadow Warfare also has a noticeable increase in the number of .308 rifles present, with the FN FAL and many variants popping up repeatedly in the hands of antagonists during the show.

Because it airs on premium cable in the U.S., Strike Back doesn’t enjoy the popularity of some other “gun nut friendly” TV shows like Justified. It’s also not a family friendly show, as there is a considerable amount of violence, profanity, and strong sexual content. However, for firearms enthusiasts, it goes to levels that most TV shows can’t even dream about. The guns are good, unique, and realistic; even better is the attention that the actors pay to their gun handling. Watching the behind the scenes features shows that the main characters are invested in their gun-handling skills, and have spent a considerable amount of time training with professionals to get the look and feel of real firearms professionals.

To read more about the guns in Strike Back, please visit our partner site IMFDB.org that showcases firearms in movies, video games, television and anime.

Originally published in the November 2013 issue of GunUp the Magazine.