The Henry Arms .45-70 is a caliber that traces its origins from the battlefield to its modern-day presence in hunting camps across the country. The Henry Arms .45-70 is a fairly short lever action and a very handy rifle. It is a very good rifle to carry around for hunting in not only the United States, but with the right loads, all over the world.

The 45-70 was developed by the United States military back in 1873. It was one of the guns that tamed the west.

The round for the 45-70 is massive. The ammunition we are using are federal premium 45-70 300 grain trophy bonded bear claws. The name 45-70 came from a 45 caliber bullet with 70 grains of powder. The bullet was just over 400 grains. The 45-70 is known for shooting around 300 yards with its standard ammunition. However, some testing has been done with a 500 grain bullet and that bullet traveled 3,350 yards with lethal effect on its target.  One of the big things about the 45 caliber is that it is excellent for close in. It’s really great for a brush gun; the bullet flies through twigs and branches without too much trouble.

The 45-70 we are using is the model HO1O. Henry introduced this in 2012.  The lever action has a very beautiful steel blue barrel and receiver. The end cap and barrel band are both very well done and the barrel band is actually machined into the front sight. Both the stock and the forearm are made out of American walnut with checkering and look absolutely beautiful. The rubber butt pad at the end of the stock helps to mitigate the recoil.

The Henry Arms 45-70 has a XS peep sight. It is very nice and well made for close up firing. The front sight has a white strip allowing for contrast to give the shooter the up close accuracy needed when firing. The 45-70 is drilled and tapped for optics if you want to add a scope for longer ranges.

The lever action is five round barrel fed. It has a beautiful brass tube that pulls right out allowing for rounds to be loaded into the barrel.  The barrel fed reload also allows for easy round unloading. The knurling on the tube is aggressive and easy to use, allowing for a smooth and easy reload. The Henry also has a side option where you can simply drop the round in and go. It is a lot quicker than the Marlin.

The rifle is super handy and easy to carry. The trigger pull is right around 4lbs, the gun breaks evenly and has no over travel. There are no manual safeties on the outside of the rifle. However, on the inside of the gun, it has a hammer transfer bar safety. The hammer transfer bar safety can only be released when pulling the trigger and it can not be set off in the case that you drop the gun or something related to that.

Henry offers a lifetime warranty on their rifles so if anything goes wrong, they will fix it. The gun is extremely well made and for the extra $90 more that you would have to pay to get a Henry compared to a Marlin, it is definitely worth it.

Introduced by the U.S. Army in 1873, this cartridge was first known as the .45 Government. As it made its way into commercially produced firearms the name .45-70 appeared because it was loaded with a 70-grain blackpowder charge with 405 and 500-grain bullets. Virtually all rifle making companies of the late 19th century chambered their single shots and lever actions for the .45-70. As those companies and their rifles faded away, the .45-70’s popularity did not. 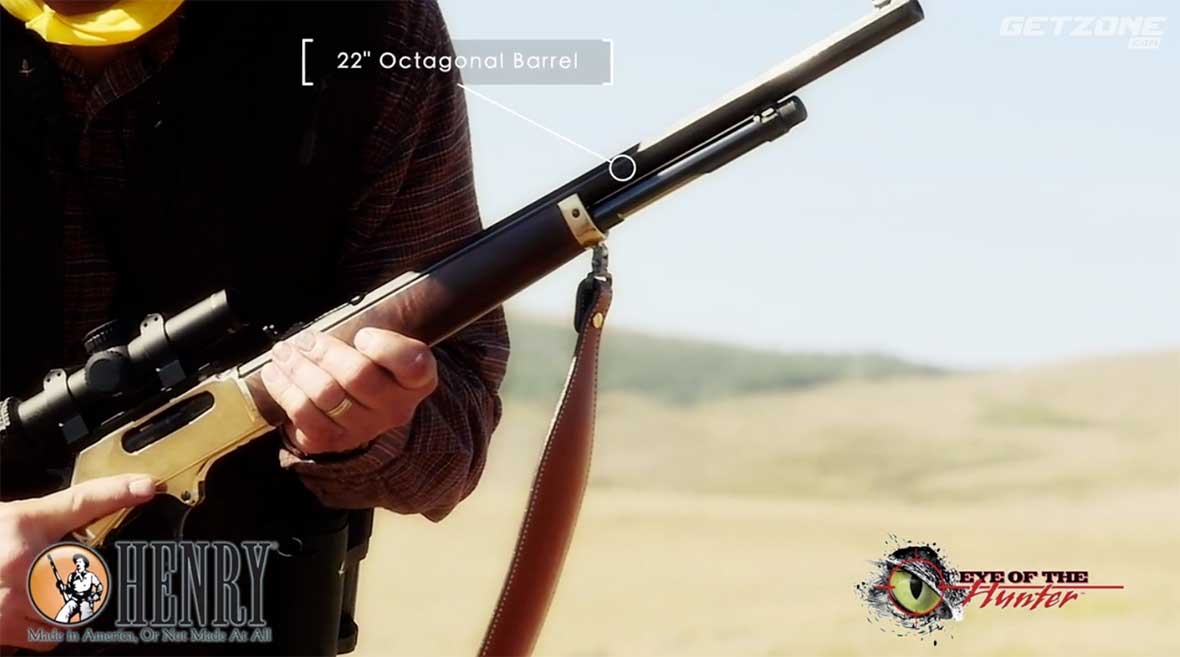 Factory .45-70 ammunition has been cataloged continuously since 1873 but never in the variety of loadings available now, in the 21st century. They range from 405-grain lead bullet, low-velocity loads for deer hunting and target shooting to high-velocity 300 to 400 grain jacketed bullet ones meant for large game.Watch the Henry .45-70 Lever Action Rifle take down some buffalo in our 3 part series of Eye of the Hunter at the Crow Nation in Southeastern Montana!

For more information on Henry Rifles visit them at www.henryrifles.com

Related Videos: It’s Time To Get Your Henry Rimfire .22 Rifle

In this video, we’re gonna talk about the benefits of turkey scouting. If you’re used to going turkey hunting blind, and no scouting done prior, you’re going to be setting yourself back a little bit. By scouting, you’re going to get yourself ahead of the game and have some ideas of where you can actually...