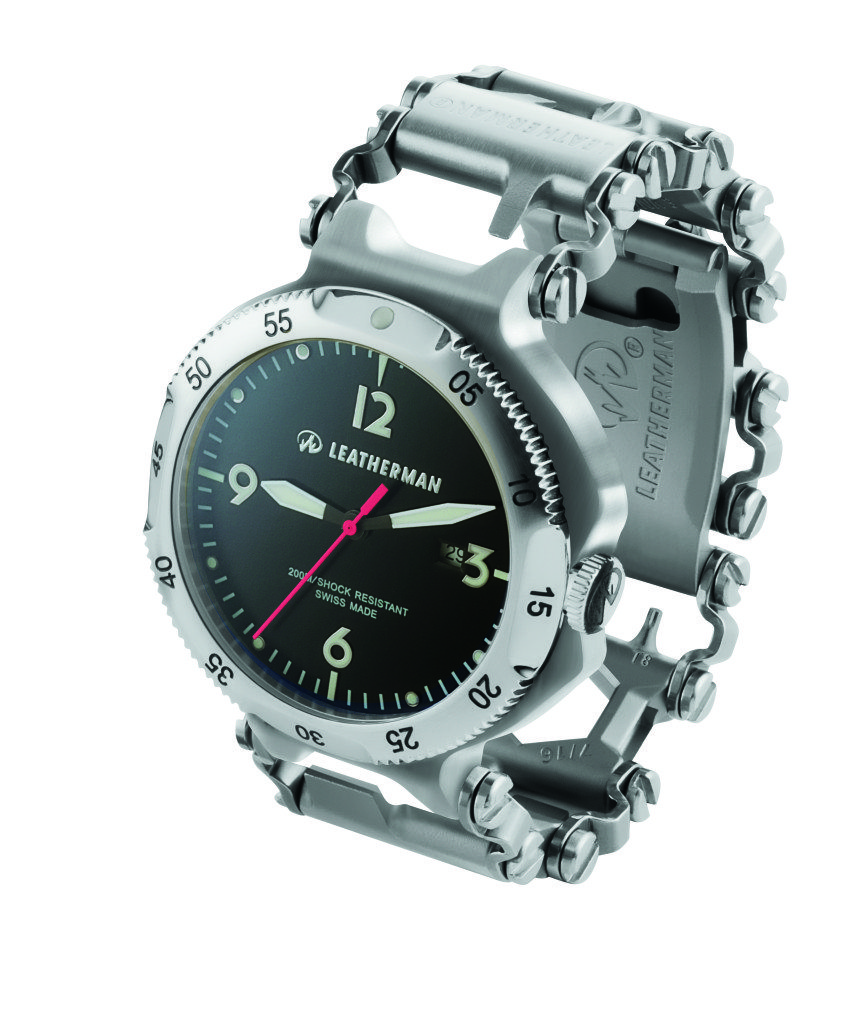 Portland, OR—January 20, 2015—This summer, Leatherman Tool Group, Inc. will debut an industry first: a multi-tool that can be worn on the wrist. The Leatherman Tread is crafted of high strength, corrosion resistant 17-4 stainless steel links that include two to three functional tools each, making a total of 25 usable features like box wrenches and screwdrivers available at a moment’s notice.

“The idea originated on a trip to Disneyland with my family,” said President Ben Rivera. “I was stopped at the gate by security for carrying a knife, when what they had actually seen was my Skeletool. I was unwilling to give it up, so they made me take it all the way back to my hotel room. I knew there had to be another way to carry my tools with me that would be accepted by security.” When he returned from his trip, Rivera, who began his tenure at Leatherman Tool Group 24 years ago as an engineer, began by wearing a bike chain bracelet to see how it would feel. As his thoughts took shape, he brought his idea to the engineers at Leatherman who helped fast track his plans.

The Tread bracelet began taking shape. Each complex link was metal injection molded for strength and intensity. The bracelet was crafted to be fully customizable with slotted fasteners, so the user could rearrange links, add new ones, or adjust for wrist size to ¼”. Even the clasp is functional with a bottle opener and #2 square drive. Other link tools include a cutting hook, hex drives, screwdrivers, box wrenches, and a carbide glass breaker.

“I began wearing prototypes myself to test comfort and usability, and to ask for feedback,” said Rivera. “Folks immediately associated the bracelet design with a watch and asked, where’s the watch? We decided to make a timepiece an optional part of the Tread.” 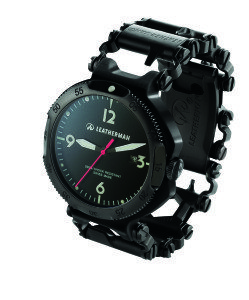 A version of the Tread bracelet that includes a watch will be available in Fall 2015. The Leatherman TreadTM QM1 will feature a unique Leatherman-designed and Swiss-made timepiece with precision quartz movement. A shock resistant sapphire crystal ensures scratch resistance for heavy duty wear, and the curved watch limits reflection and increases outdoor visibility.

The Leatherman Tread bracelet will begin shipping worldwide in Summer 2015 in stainless steel and DLC (diamond like coating) black finish. MSRP will be $150.00 and $200.00 USD, respectively. Individual links for customization will also be available. For more information

Wearable are absolutely the future right now, with the rise of the Fitbit and the ideas behind the Apple watch, we are seeing more and more people learning toward bracelets and watches like these as answers to daily life problems.

Not being able to take tools into secure locations is certainly a problem, and one that needs to be addressed, and the novelty of a tool-bracelet or tool-watch is going to be appealing to a lot of people. Also, we’re glad they decided to add the watch face, we’re watch fans here at GunUp the Magazine, and we think it looks good. Plus, it adds another element of utility to the tool.

There has to be a more practical way to address this problem of security. Like an actual tool without a blade, maybe? These tools look small, fiddly, and difficult to use, and while they’d be nice to have in a pinch, there is a certain part of this that feels like a solution looking for a problem.

Then there is the point of wearables, some are performing better than others and some are better looking than others. The wearables market hasn’t established solid ground on where the line between price, utility, and aesthetic, so it will be interesting to see how the Tread settles in.

The Tread is a neat idea, even though it still feels like a solution looking for a question. As a novelty item it’s a definite win. As a tool? The idea has potential, but we’ll wait to see how useful these small links truly are. We also think there’s a possibility that Leatherman is ahead of its time, and as the wearable market grow the concept of building tools into wearable gadgetry will also expand. Apple watch? Great. Apple watch with a bottle opener? Even better.

Take a look at the Tread at Leatherman.com.

Originally published in the March 2015 issue of GunUp the Magazine.