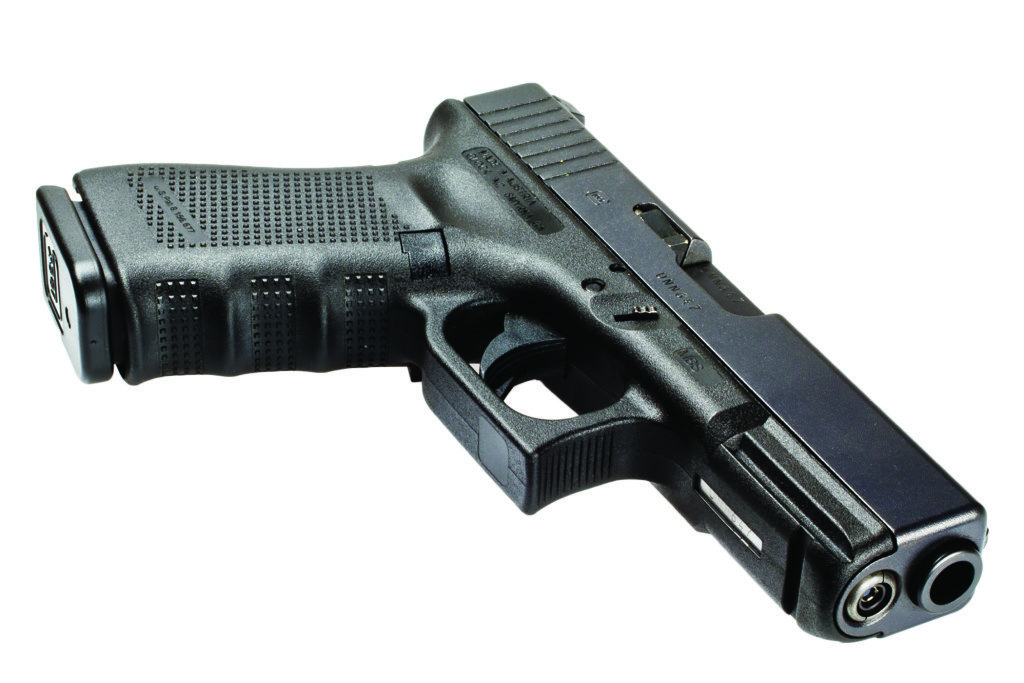 Owning and training with firearms for recreation often leads to “accessorizing.” People love to attach the latest gadget or gizmo to their firearms in hopes that it will make them more “tactical.” It is easy to get wrapped up in this practice because every day there are more and more options for firearm owners. Firearms used specifically for self-defense sometimes get caught in a stigma that you must leave the gun as it came from the factory. There are a couple items that make perfect sense on a self-defense firearm though, such as a light or laser system. If you cannot see what you are aiming at, you aren’t likely to hit it or worse yet, you may shoot an unintended target. If you cannot bring your firearm up to a normal firing stance a laser may be your best option to get hits on target. The technology for lasers and lights has leaped forward monumentally in the last decade. There is no excuse not to explore your options.

While Lasermax offers rail-mounted lasers to accommodate most rail equipped guns, their real claim to fame is their guide rod lasers. The ability to pack a full laser system into a guide rod is pretty impressive. My test unit was on a Gen4 Glock 19, which uses the slide lock lever as the activation button. Installation is fairly easy: remove the existing slide lock lever and spring, then install the Lasermax versions. Pressing the slide lock in from either side activates the laser. The laser is a flashing unit that helps your eye catch the dot and it also has the benefit of extending battery life. There are no real adjustments needed on a guide rod laser, as the laser is so close to the bore there is not much deviation. Lasermax recently released a green guide rod laser that should be popular. 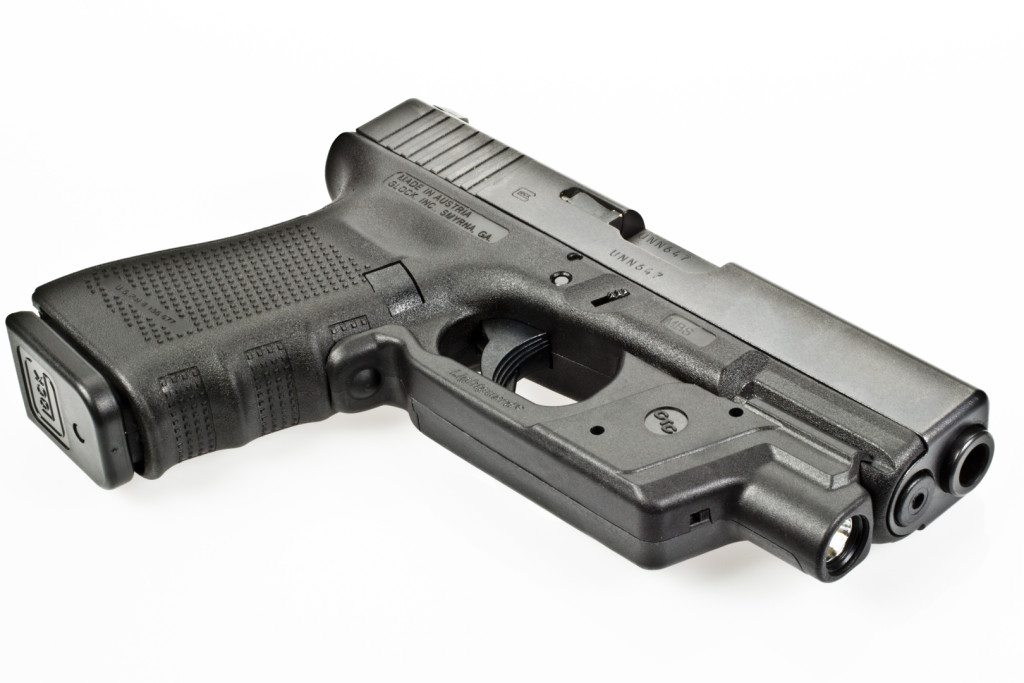 One of the golden rules of using firearms for self-defense is identifying your target. Many situations unfold in low light, which creates a problem for people that have no illumination available to them. Crimson Trace, known for their red lasers, has ventured into weapon-specific white lights. They are currently available in four models,:Glock full-size and compact, Springfield Armory XD and XDM full-size, Smith & Wesson M&P full-size, and select 1911s. The Lightguard is very specific to the firearm; it contours the grip, trigger guard, and rail area. This custom fitment makes the Lightguard seem like it is part of the gun. It does not feel like a tacked on accessory. The polymer gun versions offer a 100-lumen white light while the 1911 version offers 130 lumens.

My review unit was on a Gen4 Glock 19. Installation consisted of installing the battery into the light housing and fitting the two sides of the unit around the trigger guard of the pistol and securing it with two screws. The activation switch conveniently rides just under the trigger guard where your middle finger naturally rests. Gripping of the gun, it is a very natural movement to activate the light. The light isn’t overpoweringly bright. Some consumers may think that lumen output is all that matters in a weapon light, but really it is more about the beam pattern and throw. Projecting 500 lumens of white light into a hallway will likely cause splash back off the walls and make you less effective. The 100 lumens of the Lightguard are enough light to illuminate typical interior house distances without being too bright and causing splash back onto the user. The Lightguard still allows laser mounting with a grip-mounted laser or guide rod laser.

There are two potential drawbacks to the Lightguard. The thickness of plastic that has to be added around trigger guard causes your grip on the firearm to change slightly. You cannot get your middle finger as high under the guard. It’s not a huge difference but it is noticeable. I did not find it to be a problem but in conversation, some users mentioned that they did not care for it. The other drawback is holster availability. Anytime you mount something to the rail area of a pistol you limit the amount of holsters that will fit. Most custom kydex shops should be able to accommodate your needs. 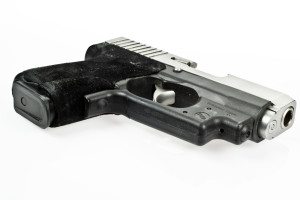 The Laserguard is very similar to the Lightguard, only instead of a 100-lumen white light it projects a red laser. The way it attaches to the pistol is exactly the same, the activation button is in the same location, and the Laserguard provides two Allen screws for dot adjustment.

The Laserguard is offered in 41 different models so you are likely to find one that works with your pistol; in fact my everyday carry CM9 is equipped with a Laserguard.  Holster selection can be an issue, but PJ Holsters was able to equip me with a suitable kydex holster. Many holster makers sell variants for Laserguard equipped guns. 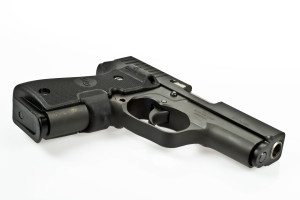 Crimson Trace Lasergrips pretty much set the standard in pistol lasers. They offer 74 models currently, covering most popular pistols. On pistols with removable grip panels they replace your current panels, or for polymer-framed guns they slip over the grip.

My test unit was for a Kahr K9 that has removable grips. The installation process was fairly simple and consisted of installing the two batteries in the grip panels and screwing the assembly in place of the original grips. It was imperative to get the battery cover doors fully seated before installing the grips or else the magazine would rub the inside of the panels. It took a few seconds to figure out why my mags suddenly did not drop free after installing the Lasergrips. Once installed properly, the grips provided a great feel in the hand and the front-mounted activation button was unobtrusive. Point of aim adjustments can be made via the two Allen screws on the right grip panel.

The laser is projected from the top of the right grip panel. Your finger may block the lasers beam if you rest your trigger finger high on the frame when not firing. I have found it a best practice to rest your finger straight out on the trigger guard when using a laser equipped gun. I have reviewed a Kimber Solo with the Lasergrips and the same situation applied to it. Holster selection is generally not as critical when using a Lasergrip due to the laser protruding further back, behind where the gun usually sits in the holster.
Viridian C5L Light/Green Laser C5L MSRP: $349.00, TacLoc Holster MSRP: $49.00

Until recently if you wanted to have both a light and laser attached to your pistol’s rail you were stuck with a fairly bulky universal unit. Viridian, a pioneer in advancing green laser technology, has released the C5L. This unit packs a green laser and a 100 lumen light into one very small package. So small in fact, that it fits between the trigger guard and muzzle on most guns.
My test unit was mounted to a Gen4 Glock 19. It tucked neatly behind the muzzle and didn’t add girth to the pistol. The C5L includes a few different mounts depending on which pistol you intend to mount to. The mounts move the C5L fore or aft for best position. The body has a push button on each side of the trigger guard that can activate or deactivate the unit. While the unit is on pressing both buttons together will cycle through the different modes. You can have the light or laser on alone or together. You also have the option for a strobing light or laser.

One very inventive thing about the C5L is what they are calling “Enhanced Combat Readiness.” No matter how much you practice, the motion of drawing a pistol and engaging the button to turn the light or laser on adds precious time. The ECR system solves this issue. When used with Viridian’s TacLoc holster, the C5L will turn on as you pull the pistol from the holster. The process is simple, turn the unit on and holster. When holstering the unit will turn off. When unholstered, the unit will automatically activate. TacLoc holsters are available for quite a few different firearms and I’m sure more will be available in the future. The TacLoc holster is a retention holster requiring a button press to release the pistol. The whole package is quite impressive but does come at a hefty price tag. For those that accept the price tag of the package, the benefits are great.

Red or green, which laser is best for you? Red lasers have a long track record because they have been around longer in the consumer market. Their main benefits are lower cost, effective use in the right lighting conditions, and lower battery consumption. Their biggest drawback is that in daylight they are harder to see.

Green lasers are relatively new but offer some key benefits. The visibility of a green laser far surpasses that of their red counterparts. You can usually clearly see a green laser in daylight and at night the green laser is eerily visible. If using it outdoors you’ll likely see a full beam instead of just the dot. This can be a benefit or detriment depending on how you look at it. It is a benefit in that you do not have to find the dot on target; you can just follow the full beam to where it ends. On the other hand, a potential adversary will also be able to see the point of origin of the beam. The other drawback of green lasers is the battery life; it is generally less than red lasers. If used on a defensive gun you may want to proactively replace batteries to ensure that when needed, your laser will perform. Green lasers are generally higher priced also.

So what’s better for you? Only you can answer that question, but until green lasers become the standard I believe red lasers will be sufficient for most users.

The advancements in laser and light technology have benefited us all. It is now possible to equip a concealed carry pistol comfortably and confidently. The next time someone says not to alter your carry gun in any way, remind them of the benefits of lights and lasers.

Originally published in the January 2014 issue of GunUp the Magazine.